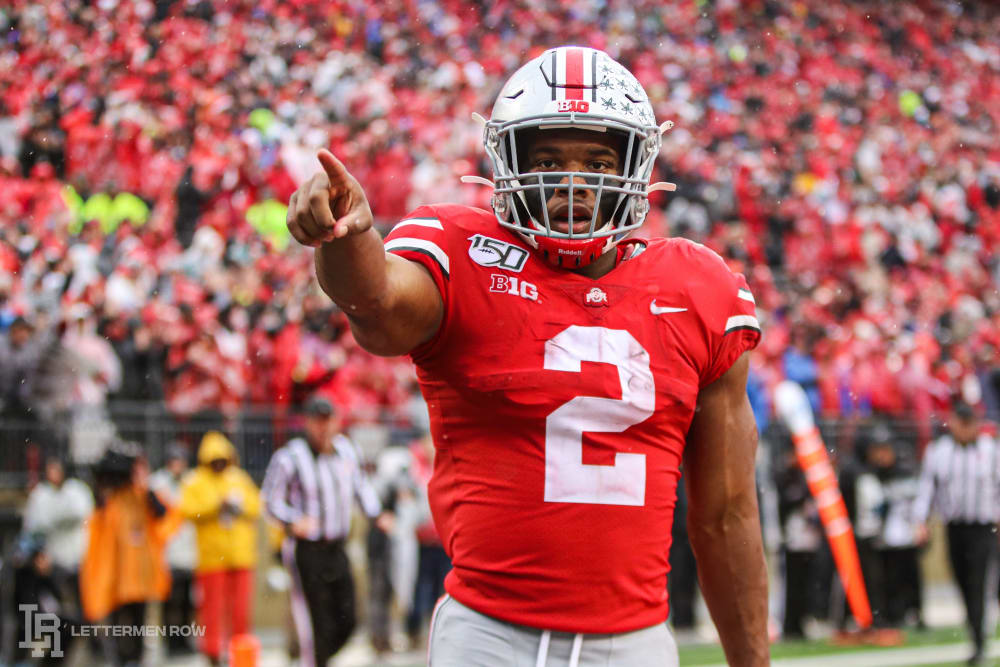 Ohio State running back J.K. Dobbins was at his best in the win over Wisconsin. (Birm/Lettermen Row)

COLUMBUS — Whether the journey is heading to the desert or a dome, Ohio State was going to have to make it through some rough weather at some point.

That’s just the way it goes in the Big Ten, and the road to a potential College Football Playoff berth can get perilous in this part of the country — and not just because of the weather. The strength of the league only adds to the challenge, and combining a nonstop rainstorm with a matchup against one of the nation’s best defenses could easily have knocked the Buckeyes off the path to a national title.

Instead, Ohio State handled both Mother Nature and Wisconsin on Saturday at the Horseshoe. And while there were times it didn’t look easy, it’s hard to argue with a 38-7 score that certainly made it seem that way by the time Ryan Day was safely back to the locker room and celebrating with the Buckeyes with a towel around his neck.

“I think this shows how tough and gritty we can play,” Day said. “This just goes to show you the potential and how tough we can be. I think we’re athletic, I think we’re talented. But when you come into the game like this and play this hard against this kind of a defense, coming off a loss for them and in this type of environment — to win like we did, I think it goes to show you how tough we are and that we have the capability to play anybody in the country.

“We had to be tough. We had to come out and play gritty.”

The Buckeyes certainly accomplished that, and now they’ll head into the final month of the regular season unbeaten, on track to defend their conference crown and establishing themselves as a legitimate threat to win the national championship. Coming off the latest impressive victory, here’s what Lettermen Row learned about Ohio State in the rain.

Silver Bullets will keep Ohio State in any game

The Buckeyes showed over the last couple seasons that Ryan Day can coordinate an offense with the firepower to win almost any shootout. But once in a while, an offense can get sidetracked — whether by poor conditions, a stout defense or sometimes just a bad bounce. Now when that happens to Ohio State, it knows it’s got a defense it can rely on to keep the game under control until the other side of the ball can find its footing. The work the rebuilt defensive staff has done this season is masterful, and the execution and energy from the players on the field has been a revelation compared to the dreadful struggles of a year ago. The turnaround couldn’t have been more clear than during the first half against Wisconsin, with the Buckeyes pitching a shutout and bottling up Jonathan Taylor to stake the program to a lead — and setting the stage for the onslaught after intermission.

Maybe it seems like hyperbole to put three Buckeyes in the race for the most coveted individual award in college football. And it definitely would have been hard to believe during the preseason when Justin Fields had never started a game and Chase Young wasn’t really an option simply by virtue of playing defense. But along with the surge from tailback J.K. Dobbins, Ohio State absolutely now has three different guys who could draw votes and potentially turn the Heisman Trophy celebration into an advertisement for the program. Young is the most dominant player in college football right now, and his four-sack, two-forced fumble outing appears to finally have caught the attention of voters on Saturday. At the same time, Dobbins took the mantle as the best running back in the Big Ten and Fields added three more touchdowns as the leader of a national-title contender. It would be a surprise at this point if one of those guys doesn’t make it to New York — and there’s increasingly looking like a chance for two. 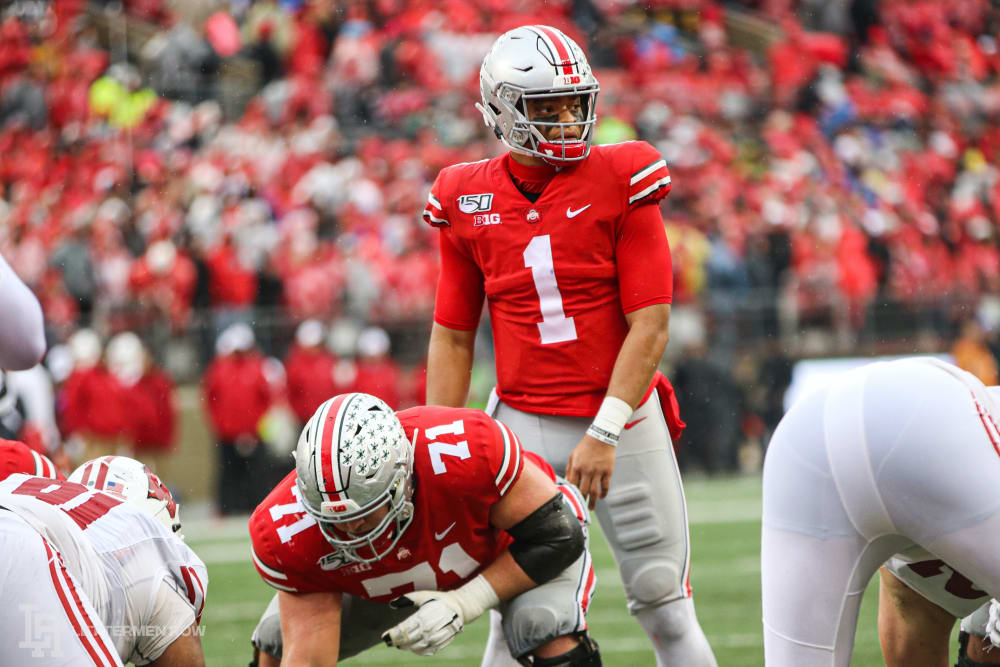 There is always a risk of giving a freshman too much before he’s ready for it, and there’s also a lot of trust and some experience that needs to be earned before Ohio State turns guys loose in key situations. But Garrett Wilson isn’t slowing down any, and he showed again when given the chance on Saturday that he’s the best option the Buckeyes have to potentially break a game open as the punt returner. His 23-yard return was electrifying, just like the 52-yard scamper that initially showed his potential in that phase of the game last month. Combine that with a shaky history of fielding kicks from Demario McCall and a wild decision he made to field one swirling in the wind on Saturday and it feels like the time has arrived for a full-time change.

There is probably nobody on the Ohio State roster who has had worse luck dealing with injuries for any longer than Justin Hilliard, and it seemed like his chance to finally emerge as a fifth-year senior had come and gone again in the spring with an Achilles injury. But the veteran linebacker attacked his rehab, never gave up hope and has now not only worked into the rotation — he played a key role in helping slow down Wisconsin in the most important game of the season so far. Hilliard only made one tackle, making it count as pursued the football and forced a loss of six yards. But it was his insertion into a package with four linebackers to help negate the Badgers rushing attack that reflected the confidence the coaching staff has in Hilliard, showing that he’s got a chance heading into the stretch run to still make an impact the way the Buckeyes always envisioned. 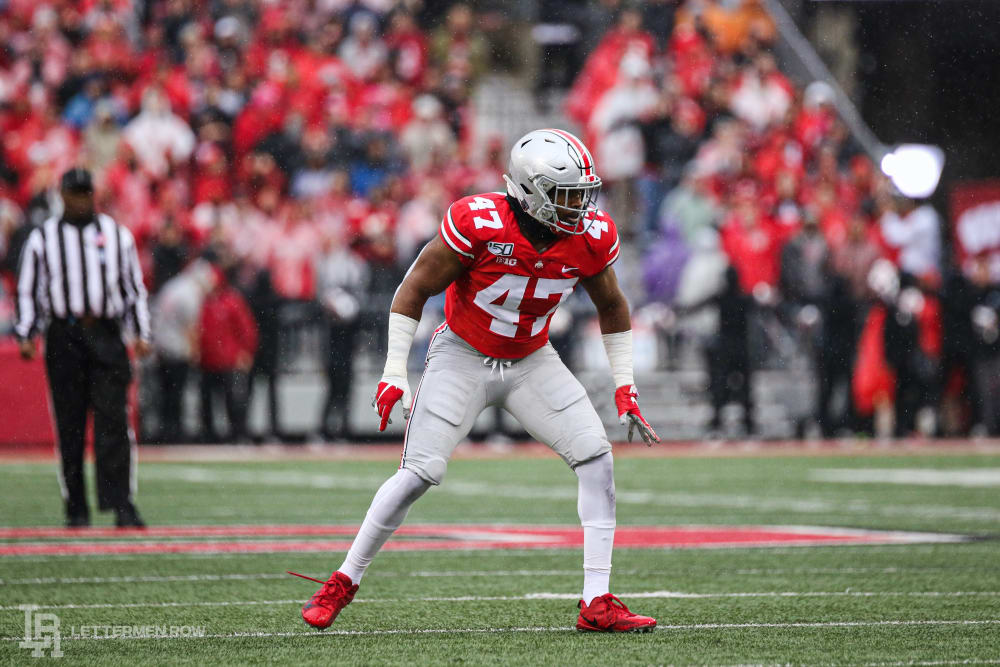 Ohio State linebacker Justin Hilliard made a key tackle for loss for the Buckeyes. (Birm/Lettermen Row)

The conditions weren’t ideal for receivers, Ohio State was short-handed without Austin Mack available and the Wisconsin defense was making it tough at times for Fields to even get passes out of his hands. Chris Olave, though, again came to the rescue to boost the attack through the air, and his 7-catch, 93-yard, 2-touchdown performance is even more impressive when the fact that the Buckeyes only completed 12 throws is factored into the mix. The sophomore has become a big-game specialist for Ohio State, delivering his best work when the program absolutely needs it the most. And while most of the attention on Saturday went to the superstars, Olave was somewhat quietly giving reminders that he might be the next in line for Ohio State.