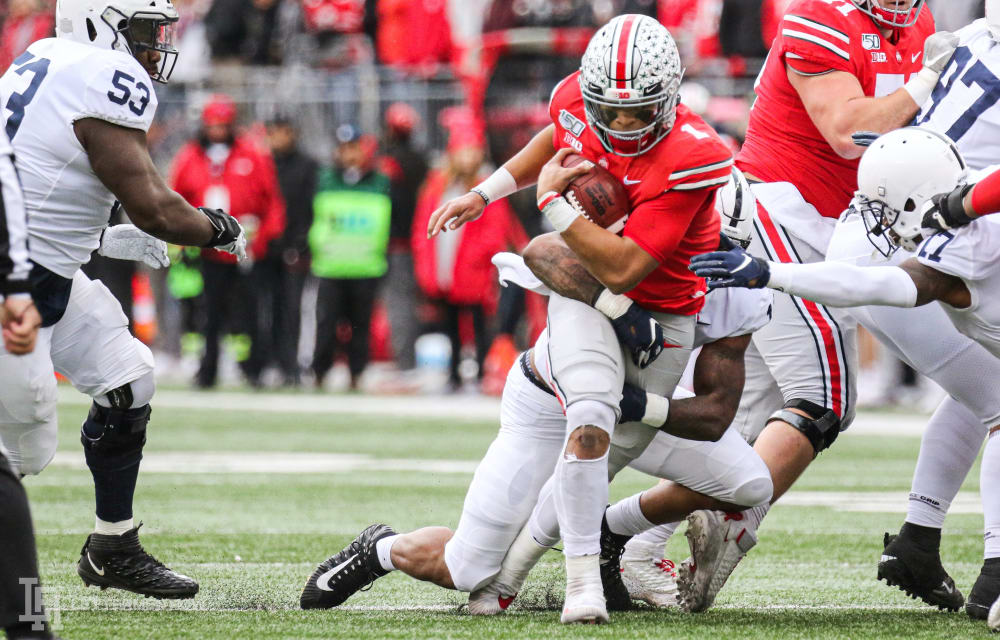 COLUMBUS — If Ohio State could have made it through an entire national-title run without a true test, obviously Ryan Day would have taken that option.

That was obviously unrealistic, though, so maybe it was overdue that the first-year coach got a real look at what his Buckeyes are made of this season.

Finally, Ohio State got a challenge from a top-10 opponent with a division title on the line in weather conditions that were less than ideal. And even in a game when the Buckeyes turned it over three critical times, they still won by a double-digit margin in a 28-17 decision over Penn State on Saturday at the Horseshoe.

Honestly, once it was over, there wasn’t much more Day could have asked for since the latest victory revealed some character and showed Ohio State can still play even better.

“One of the things about playing in a game like this is you have to be willing to take punches and you have to not flinch when it happens,” Day said. “And that was a great example. That was the first time we really were taking shots there, 14 straight points [allowed], and I’m not proud of that because we literally gave it to them. We handed them the ball. And we’re going to get that fixed.

“That was the first time — it was a little bit in the Wisconsin game — but we were really reeling right there, and we had to respond. And our backs were up against the wall, and we did. So, to win a game like that when it was not clean shows the toughness that we have, because you walk out of that game thinking: Oh, we probably could have won a lot bigger than that.”

More than anything, the fact that Ohio State was on the brink of blowing out arguably the second-most talented team in the Big Ten if not for three fluky fumbles should be the biggest takeaway heading into the regular-season finale at Michigan and the postseason from there. Before diving into The Game, Lettermen Row is looking back again at the hard-fought victory over Penn State with the lessons learned on Saturday. 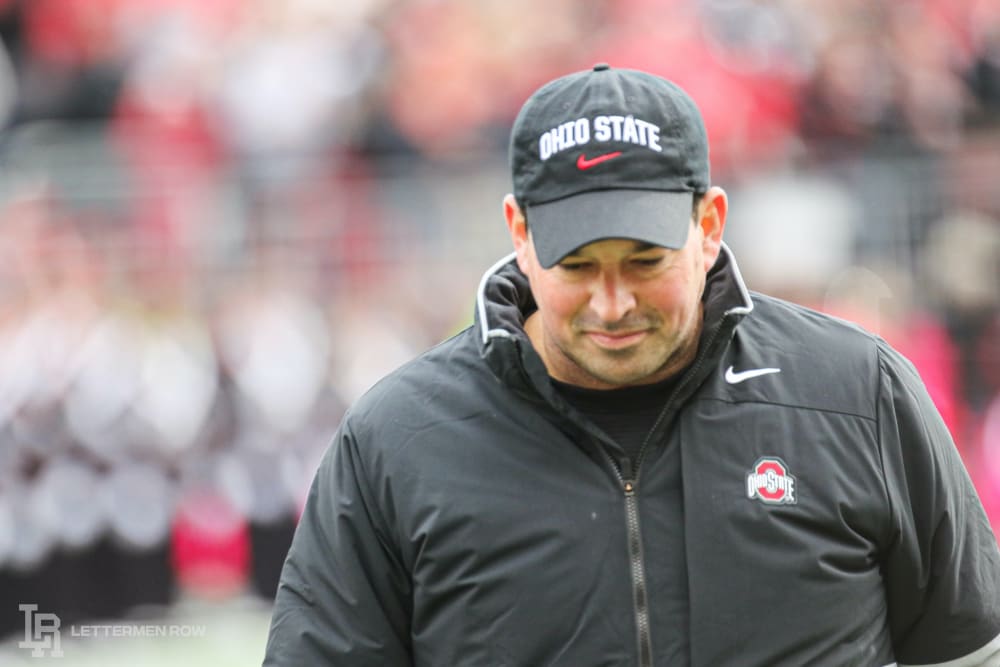 Ohio State coach Ryan Day is still unbeaten as the leader of the Buckeyes. (Birm/Lettermen Row)

Only Ohio State can slow itself down

Ohio State has faced enough top-ranked defenses this season to know for sure that there’s nobody out there really equipped to limit its explosive attack. With a dynamic dual-threat quarterback, the best tailback in the country, a powerful offensive line and a dazzling array of receivers, the Buckeyes are essentially able to do whatever they want against anybody in the country. So, that certainly made it a bit odd to see Day going with such a conservative approach against the Nittany Lions, rushing 61 times and finishing with just 22 pass attempts. Combine that with the uncharacteristic fumbles and Ohio State was essentially shutting down itself in a matchup that could have been over early. Maybe, though, that just means Day has more tricks up his sleeve for rival Michigan.

The turnovers are going to be harped on incessantly for Ohio State, even though Justin Fields already knows fumbling three times is clearly unacceptable. There are excuses that can be made for all of them, including the fact that one should have been overturned by replay and he probably shouldn’t have even been in position the last one, but that doesn’t matter. Fields will have to be better with the football, and that’s no secret. But when he is taking care of it, the sophomore quarterback is capable of producing magic for the Buckeyes. His touchdown throws to K.J. Hill and Chris Olave were gorgeous, he left no doubt that he’s willing to run as much as Ohio State needs him to and he continues to bounce back even from big-time hits as he shows remarkable toughness. The performance against Penn State’s touted defense was a bit of a mixed bag — but it was another win for the first-year starter.

The main attraction is always going to be Chase Young for Ohio State, and certainly his dominance is a major part of the overall turnaround of the Silver Bullets. But the defensive end can’t do it all by himself, and the linebackers in particular were fantastic in the effort against Penn State, underscoring how critical the improvement of that unit has been for the rebuild. That group took the most heat for the historically-inept defensive work a year ago, and it was deserved — though not necessarily because of the players, who have all shown this year that personnel wasn’t the problem. Pete Werner drew tough matchups in coverage and broke up two passes to go with a team-high 10 tackles. Baron Browning returned from injury with 2.5 tackles for loss, 1.5 sacks and off-the-charts energy. And Malik Harrison was seemingly everywhere, finishing with 9 hits and 2 tackles for loss of his own. Those guys all deserve credit for sending a message about the quality of the Ohio State defense. 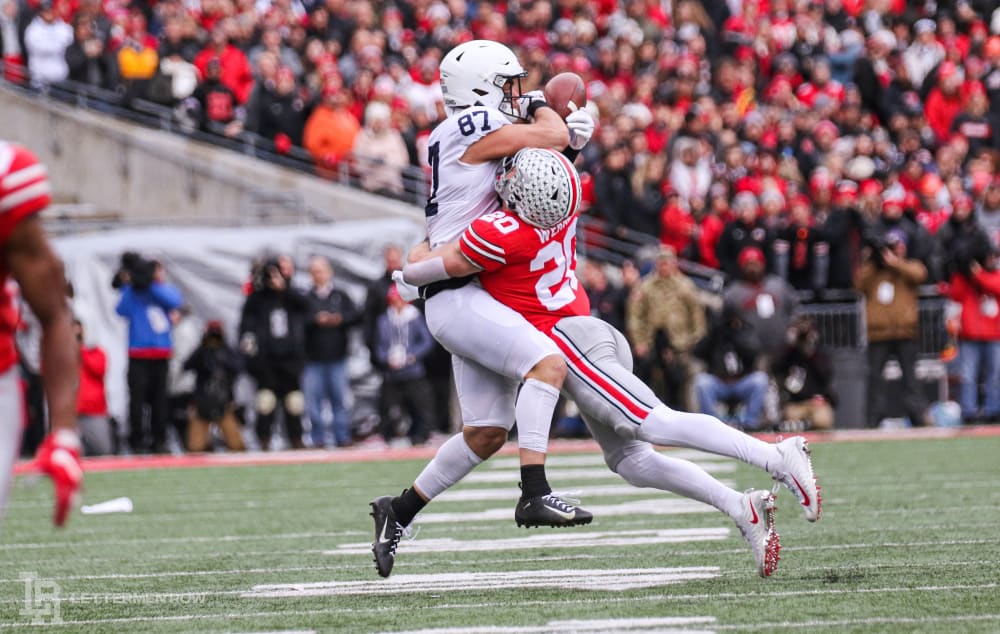 Ohio State linebacker Pete Werner played one of his finest games with the Buckeyes. (Birm/Lettermen Row)

The offseason tradition of speculating about which top-ranked recruits are going to play right away as a freshman is always fun, and Garrett Wilson and Zach Harrison are actually delivering key plays for Ohio State in their debut seasons. But the strength of the program is that the Buckeyes don’t need newcomers to give them significant contributions — even when there are so many four- and five-star talents arriving every year. In fact, it’s the ability of Ohio State to add them in every recruiting class that makes it hard for young guys to see the field — and makes the team a national-title contender. Having grown men like Jashon Cornell, Justin Hilliard, K.J. Hill and others who have spent five years getting developed is a difference-maker. And looking forward to next year, Jonathon Cooper will get to play that role now that he’s elected to redshirt.

It’s entirely possible that Ohio State built a three-touchdown lead and then thought that was going to be enough with the way the defense was dominating and bad weather on the way. If that’s the explanation for the lopsided, run-heavy offense, that’s understandable. But when the Buckeyes needed another big play to put a championship game away, it once again turned to Chris Olave, who is becoming Mr. Clutch for the program. His soaring, strong-handed touchdown grab in the fourth quarter added to his legacy of delivering for the Buckeyes when it matters most, and quite simply, he’s going to need to have more than two catches in every game left if they’re going to win a national title.