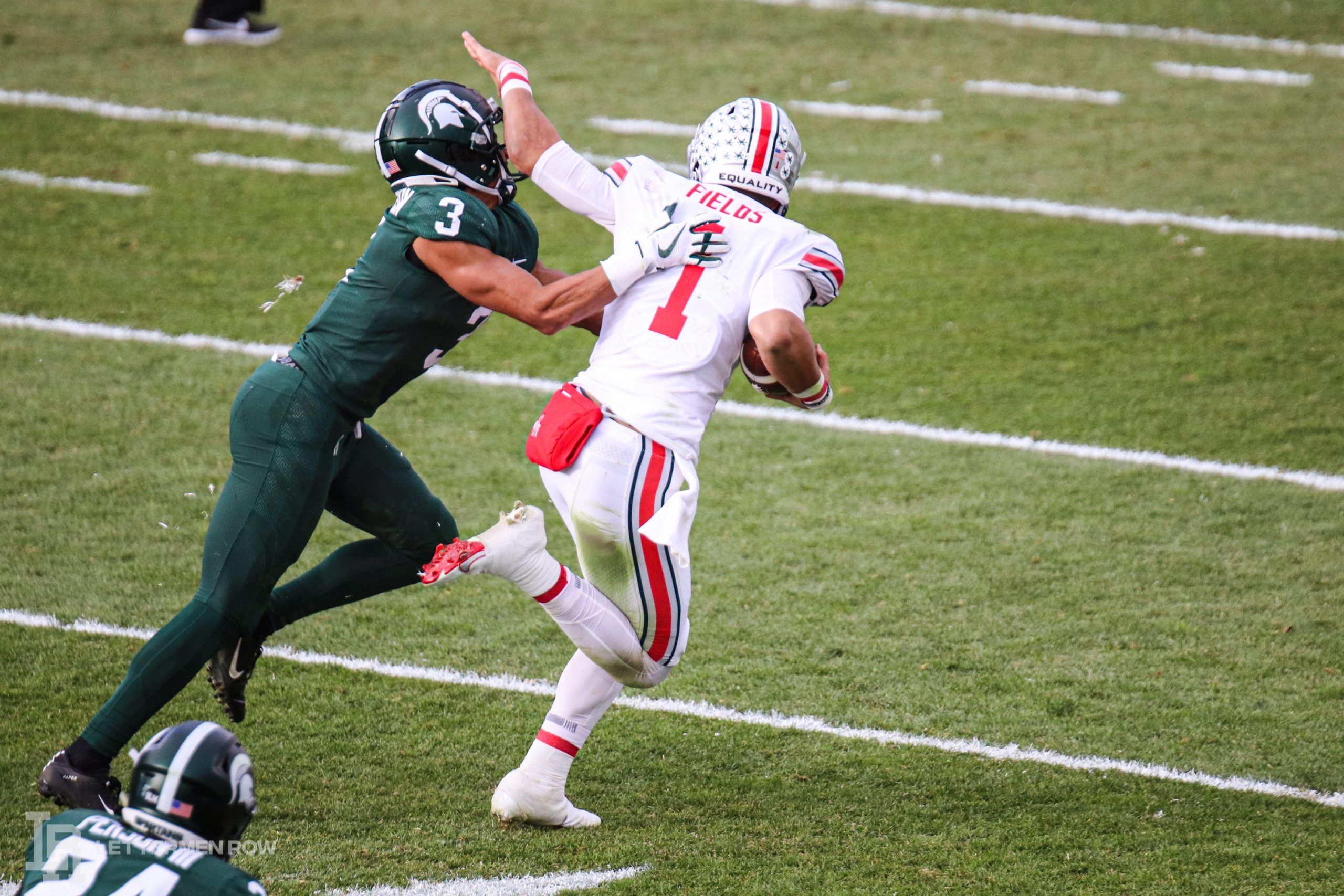 Isolated thanks to his positive COVID test hours away from his team and with all communications shut off once kickoff arrived, Day made it clear there wasn’t a lot of relaxing going on as he watched the broadcast from home.

Of course, the Buckeyes wound up making it as easy as possible for him, leaving little use for nervous energy with easily their most impressive, dominant four-quarter stretch of the season so far. Ohio State roared back to life following its pause and cancellation a week ago, sending an undeniable message that it remains a legitimate championship contender even with its coach and a large handful of key starters unavailable for the 52-12 beatdown at Michigan State on Saturday.

“We take a lot of pride in being Buckeyes,” Ohio State coach Ryan Day said. “There’s so much emotion going into this season, so to see the team rally together in this moment [was great]. We certainly have a lot more football to play, but we live to see another day. With these kinds of challenges and the adversity that we’ve been through, I think that was a moment.

“It’s something that everybody needs to enjoy for a night, and then we’re on to the Team Up North.”

It remains to be seen if The Game against rival Michigan will actually happen as scheduled or if other arrangements will have to be made for the Buckeyes. But either way, Ohio State heads into the final week of the abbreviated regular season with newfound momentum and plenty of confidence after overcoming a number of significant challenges to cruise past the Spartans.

What did Lettermen Row learn about the Buckeyes in the process? Let’s break it down. 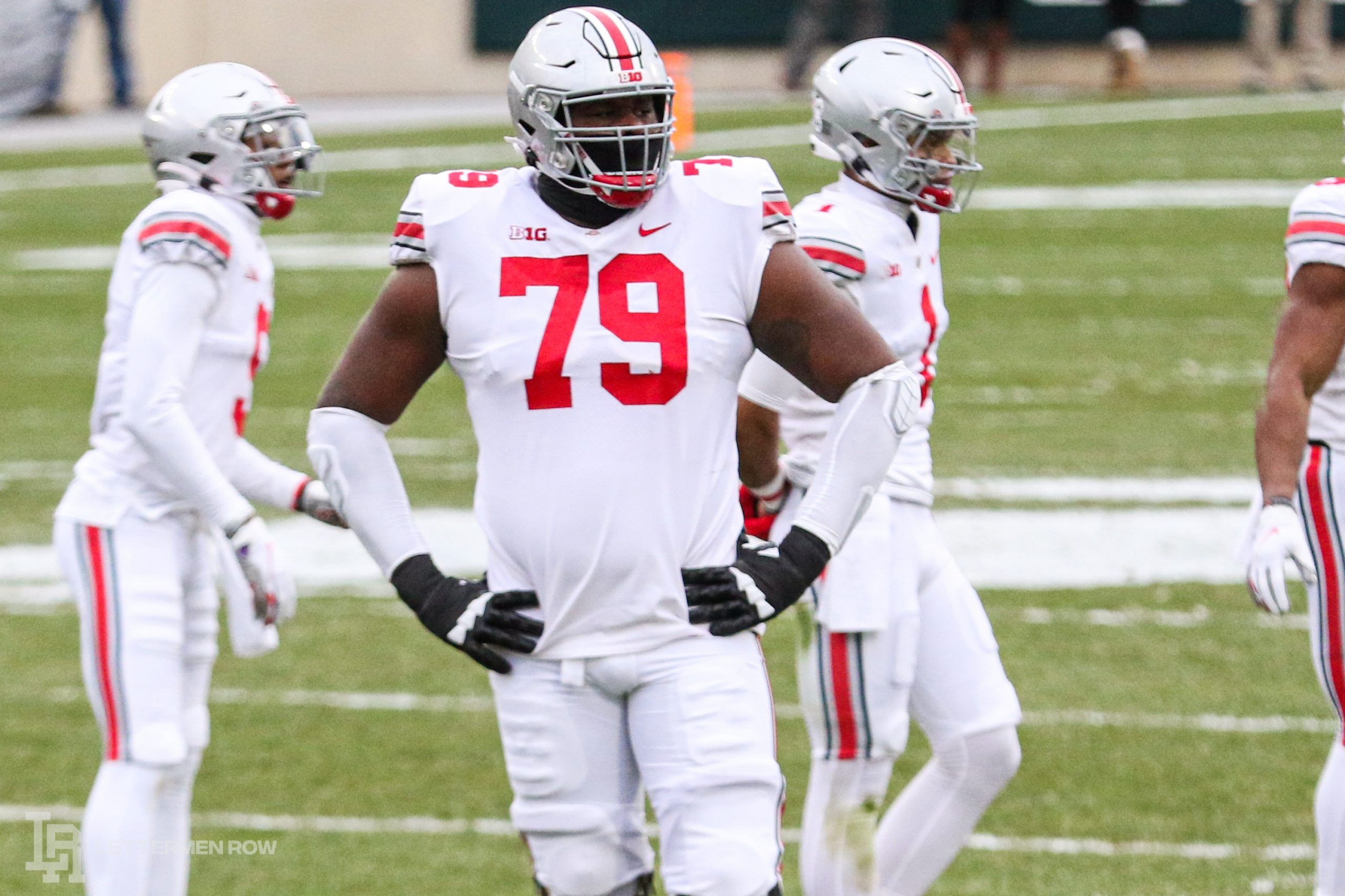 Dawand Jones can have massive impact for Ohio State

Ohio State suffered huge losses on the offensive line, and it turned to the biggest guy it has to help fill the void. Dawand Jones made it work, throwing his enormous frame and freakish athleticism around at left tackle to anchor a truly remarkable outing from a patchwork unit up front.

Jones doesn’t deserve all the credit, of course, since Max Wray and Matthew Jones also were key contributors making their first starts and Harry Miller did an admirable job of sliding to center on short notice. But the spotlight is always going to find that mountainous man when he’s on the field, and he continues to make far more of an impact than ever could have been projected at this point in his career. Viewed as a long-term project as a recruit, the Buckeyes wound up pulling the redshirt off him last year and have worked him at both guard and tackle this season to establish him as one of the most important backup options. He’s looking like a future star for the Buckeyes now.

The old-school, physical Big Ten battle was almost perfectly designed to feature Tuf Borland, but the three-time captain at linebacker was unavailable for the trip to Michigan State. Maybe in past seasons it would have been a bigger deal to not have the signal-caller and run-stuffer in the heart of the defense, but Ohio State has built up the depth in that unit to a level where it could keep humming along without much disruption.

Justin Hilliard took on a heavier workload, and the veteran responded with five tackles and a jolt of energy for the Buckeyes. Dallas Gant was called on for more snaps on the inside as well, and he continued to make the most of his opportunities with five tackles and an assisted tackle for loss. The Buckeyes obviously knew what they would get from unheralded superstar Pete Werner and playmaker Baron Browning, but it’s still worth a reminder of just how far the linebackers have come in two seasons working with position coach Al Washington. 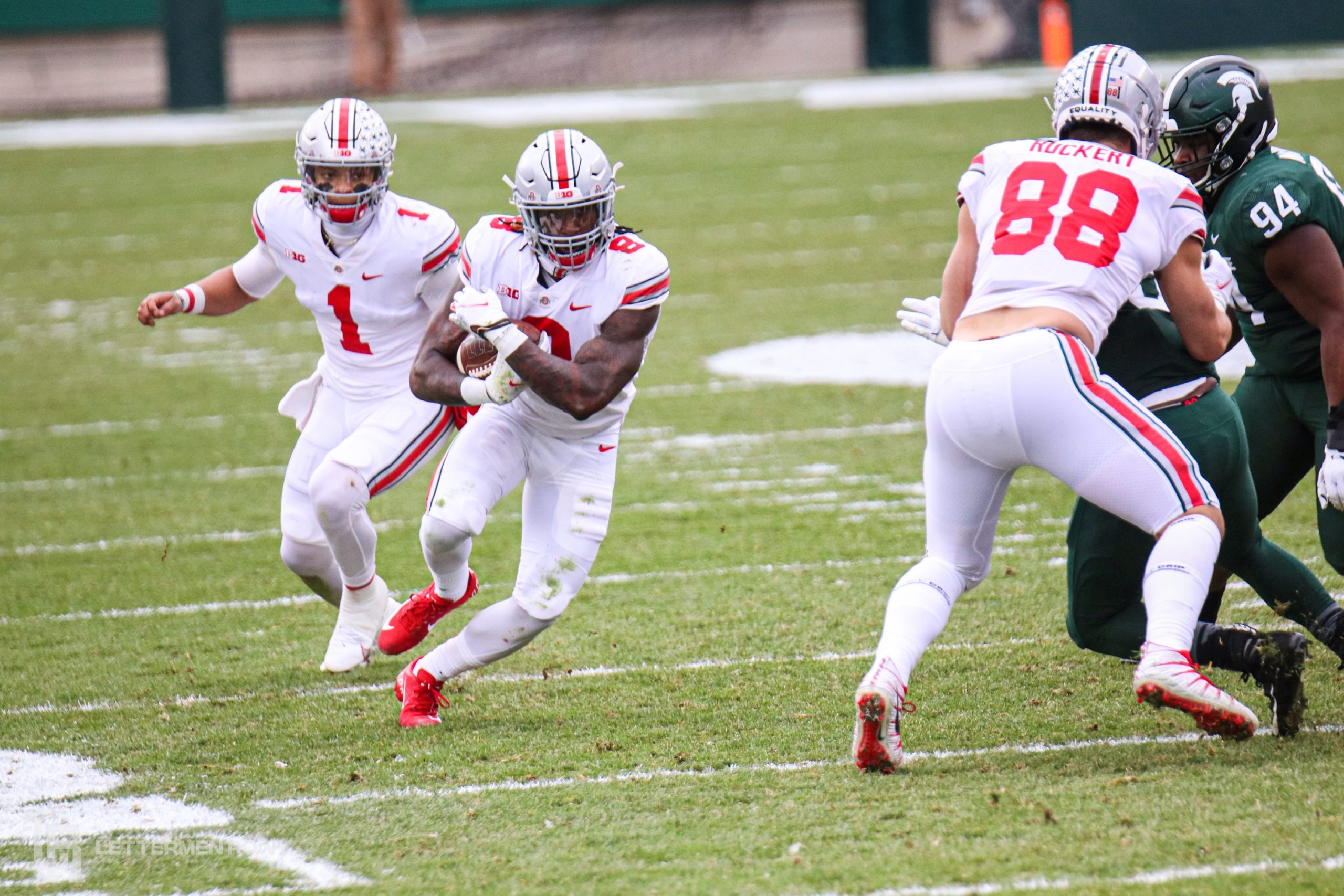 There was so much hype around the graduate-transfer arrival of Trey Sermon in the offseason, it was easy to forget all the challenges he was facing to make a smooth transition into the program. Sermon had a knee injury during his last season at Oklahoma, he didn’t get to go through spring practice with the Buckeyes, training camp was unusual and there were no nonconference games for him to work his way into comfort in a new system.

But his fifth outing with Ohio State showed exactly why that buzz existed with Sermon exploding for a pair of lengthy runs on the way to 112 yards and a touchdown — which he capped by pointing to his wrist and signaling that it was about time for his first score with the program. The Buckeyes appear to have played their two-tailback approach exactly right so far, since playing both Sermon and Master Teague allows them to ride the hot hand. It was Sermon’s turn to break through against Michigan State, and he’s building steam at just the right moment.

Buckeyes still need to be more careful with football

Everything starts with the snap, of course, and that will be where the conversation about protecting the football begins for Ohio State this week. Harry Miller obviously is aware of the importance, and he spent just about every free second on the sideline on Saturday working to get the issue corrected and hit the target more consistently. The sophomore is one of the hardest workers on the roster and should only improve coming out of his first start at center — and that definitely isn’t an easy transition on short notice.

The more puzzling development was the lack of ball security from Chris Olave, who fumbled twice and has now done so four times this season. The junior wide receiver has some of the strongest, surest hands in the country, and the Buckeyes leaned heavily on him with 10 catches for 139 yards and a score in the win over the Spartans. But after the catch, Olave still needs to do a better job securing the football as the stakes continue to escalate.

The Game is not sure thing for Ohio State, Michigan

The final week of the regular season is here, but a rivalry showdown is not guaranteed for Ohio State and Michigan. So, instead of immediately turning the page to focus on The Game on Saturday, the Buckeyes will return to practice without knowing for sure who they will play on Saturday.

The Wolverines are in the midst of a pause of team-related activities following a spike in positive cases within the program, and that has put plans for the rivalry on hold as well. After conversations with Lettermen Row sources with direct knowledge of the situation, Ohio State and the Big Ten will have daily conversations starting Sunday to try to reach a decision about its status for this week as early as possible. If Michigan can return to its practice facility on Monday or practice by Tuesday like the Buckeyes did coming off their COVID issues, that would obviously be an encouraging sign that the rivalry can continue in the Horseshoe. But if not, the Big Ten is currently unwilling to drop the six-game requirement to play for the conference title, which will instead put pressure on it to find another opponent for the Buckeyes.

The team to watch right now is Minnesota, since a cancellation from the Gophers will provide a relatively tidy solution for the conference by sending Rutgers to play Nebraska and having Ohio State make up its trip to Maryland. That situation could get more complicated if the Gophers are able to return to action this week, but the Big Ten is certainly aware of the credibility issue of its championship if it doesn’t help the Buckeyes get a sixth game — and the potentially significant financial implications if the league doesn’t get a spot in the College Football Playoff. The expectation is that the Buckeyes will play on Saturday, but the opponent might not be definitively known until Tuesday or even Wednesday.