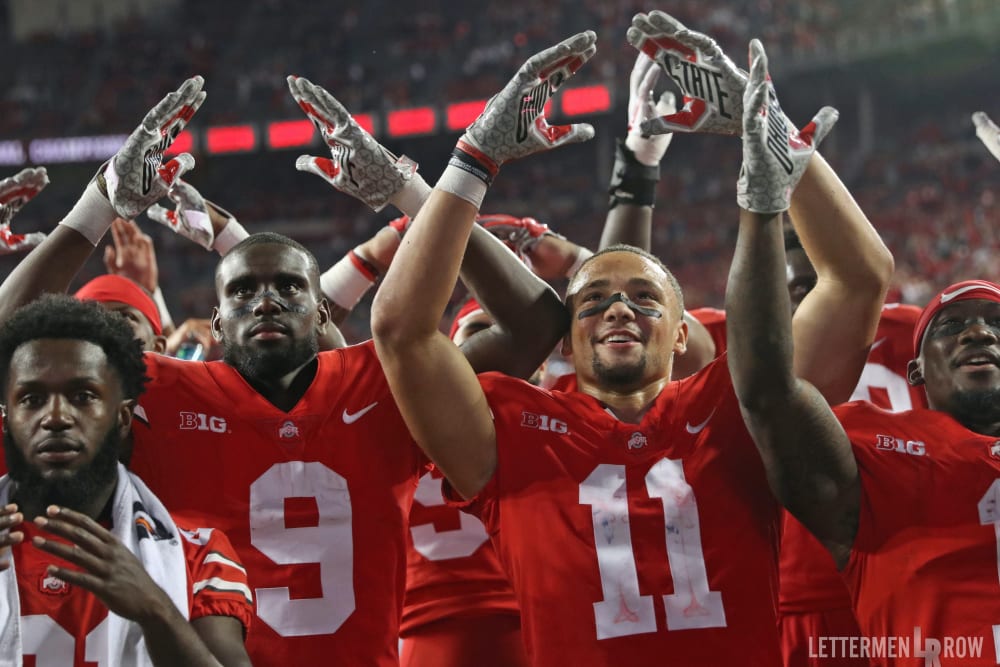 COLUMBUS — The standards at Ohio State are extremely high for a reason, and Urban Meyer isn’t going to compromise them.

So, if what the Buckeyes delivered on Saturday against Indiana counts as a shaky performance, the program is in even better shape than it even gets credit for typically.

By its own admission, Ohio State didn’t practice well coming off the emotional and physical drain of rallying on the road against Penn State. The defense continued to have issues allowing big plays. The offense uncharacteristically turned the football over three times.

And yet the undefeated Buckeyes stayed that way by ultimately still cruising to a lopsided 49-26 win over the Hoosiers at the Horseshoe. That will serve as the latest reminder of just how high the ceiling is for this team since there was clearly so much left on the table for Ohio State even while comfortably dispatching a division opponent.

What else did Lettermen Row learn about the Buckeyes in the win at the midway point of the regular season? Let’s break it down before getting ready to turn the page to Minnesota next weekend.

Not every game is going to be perfect in college football, and it’s important to remember that and put each week in the proper context. It was easy for Ohio State to talk about fighting off the Penn State hangover and much tougher to actually do, which was finally conceded on Saturday evening by a bunch of exhausted players and coaches. A sluggish outing against Indiana doesn’t change anything when it comes to the championship potential for the Buckeyes, though, and the way they battled through it should actually go down as a sign of improvement compared to last season and the epic letdown at Iowa. First and foremost, 23-point wins against solid Big Ten opponents when Ohio State doesn’t have its best stuff are significant — and not something that should be taken for granted. 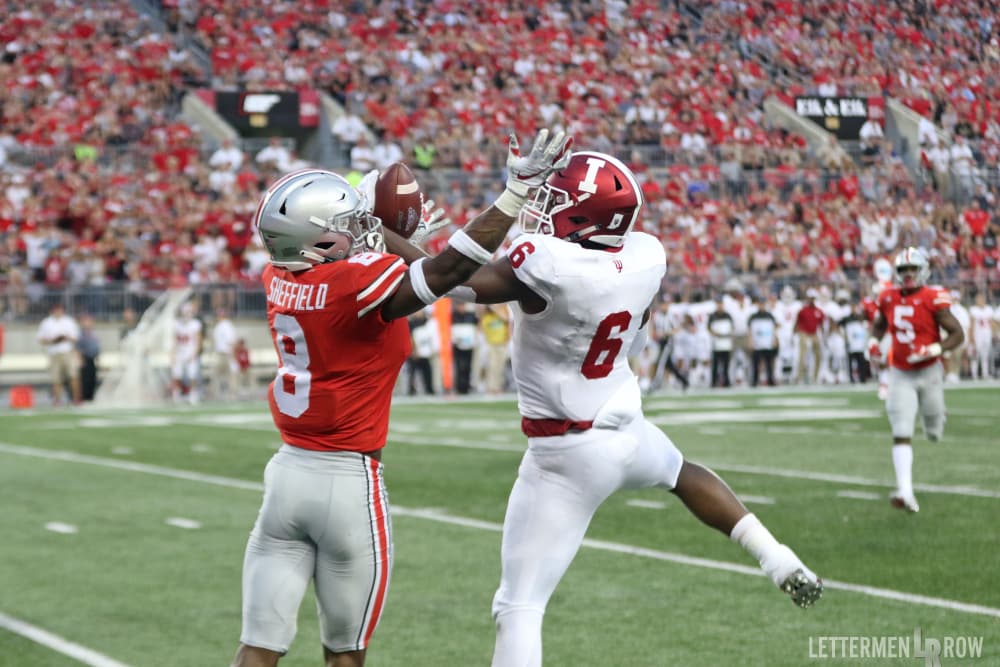 Breakdowns in the secondary must be addressed soon

There hasn’t been a rush to hit the panic button yet, but Ohio State might want to dial up its concern level with the secondary now that it’s officially played half of the regular season and the same problems keep popping up. It’s not uncommon to have transition periods with new coaches, and the Buckeyes have fresh faces working with both the safeties and cornerbacks after the arrivals of Alex Grinch and Taver Johnson, respectively. But there has been such an incredible amount of talent stockpiled at those positions according to the recruiting rankings, it’s hard to understand why the Buckeyes are continuing to take such poor pursuit angles or how they continue to be victimized by either long catches or pass interference flags with such regularity. Whether it’s scheme, personnel or a combination of both, Ohio State can’t wait much longer to get it fixed.

The clutch play at Penn State was important for a number of reasons, but the confidence and validation it’s given Binjimen Victor might be the one with the most lasting impact. After sparking the comeback for the Buckeyes last week with his ridiculous catch-and-run touchdown, Victor followed that up with one of the most eye-popping grabs of the season in the back of the end zone for a 30-yard yard score from Dwayne Haskins. There aren’t many wideouts who can adjust to the football at full speed, stretch out, secure the football and stay inbounds the way Victor did against the Hoosiers. And after dazzling solely on the practice field for the last couple years, now he’s showing the world what he can do.

After already losing Nick Bosa until at least November, Ohio State could hardly afford to lose another potential first-round draft pick on the defensive line. But it appears the ankle scare for Dre’Mont Jones isn’t going to be a problem for the Buckeyes moving forward. The redshirt junior defensive tackle was back to being a beast in the trenches, making the most of his snaps against the Hoosiers with a sack, a forced fumble, a recovery and a pair of tackles. Jones might not have been completely back to full strength, but he was still able to provide a big lift for the Buckeyes defensively and didn’t miss any starts due to the ankle injury. 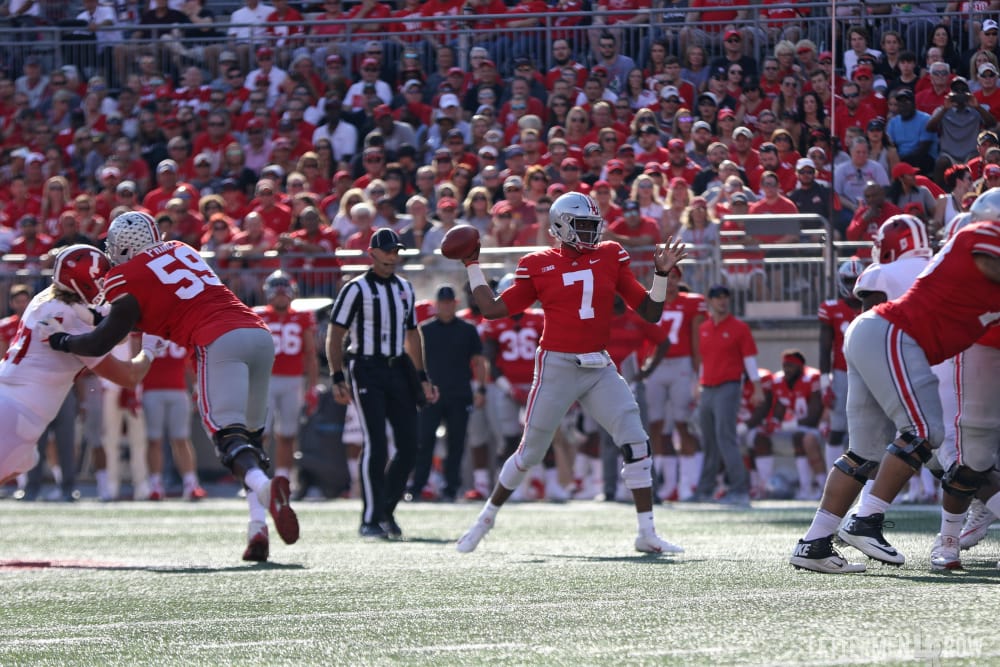 Like just about everybody else, Dwayne Haskins didn’t seem to have his best stuff on Saturday. But he still nearly set a school record with 455 yards passing and casually tossed six more touchdowns, which is obviously pretty solid for a so-called off night for the Ohio State quarterback. Haskins was pressured by the Hoosiers, though, and he had his first two-interception performance thanks to a pair of throws that missed the mark after he was hit in the pocket. The Buckeyes would like to see the turnovers disappear, but it’s hard to really complain about all that production from Haskins as he appears to be on the way to punching a ticket to the Heisman Trophy ceremony in December.