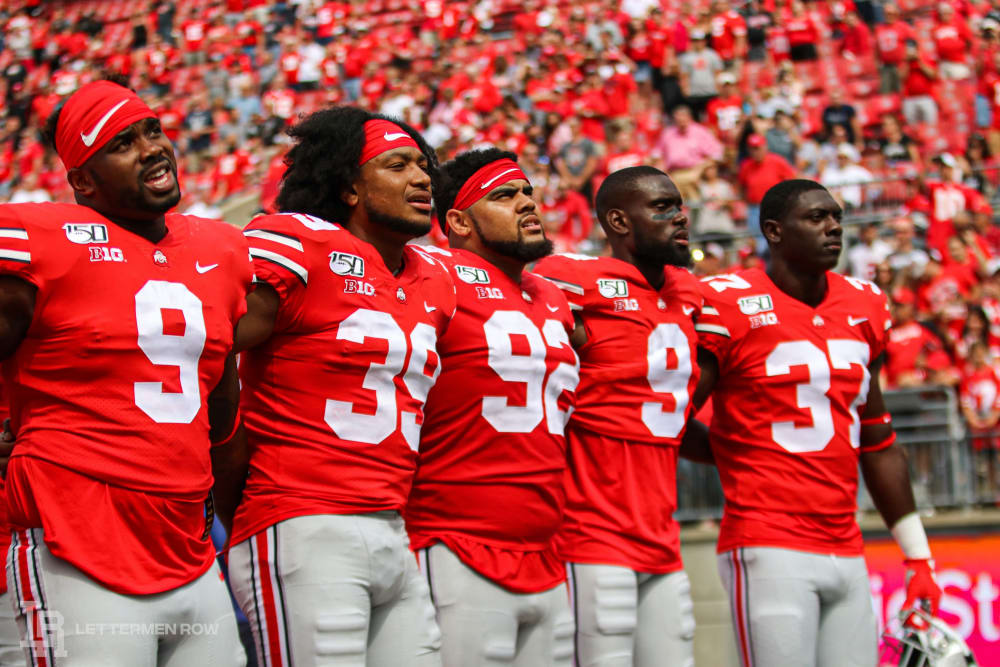 Ohio State claimed the first win of the season by cruising past Florida Atlantic on Saturday. (Birm/Lettermen Row)

COLUMBUS — For at least a quarter, Ohio State gave a glimpse at the team it might become this season.

From there, it’s a matter of interpretation to figure out exactly what else the easy opening win for the Buckeyes really meant.

Did they take the foot off the gas on purpose after that overpowering barrage in the first few minutes of the season? Was Ohio State just complacent after essentially sealing a victory before the second quarter even started? Were those simply the understandable, expected inconsistencies of a team shaking off the rust in a real game and breaking in a bunch of new players?

Maybe it’s all of those things for No. 5 Ohio State, which in the end is probably all acceptable for Ryan Day. The first-year coach gets some positive reinforcement for the Buckeyes, a healthy dose of teaching points and a handful of examples that his team has work left to do on the way to becoming a national-title contender as they get back to work preparing for Cincinnati.

But before turning the page to Week Two, Lettermen Row is breaking down what it learned about Ohio State in the 45-21 win over Florida Atlantic on Saturday at the Horseshoe. 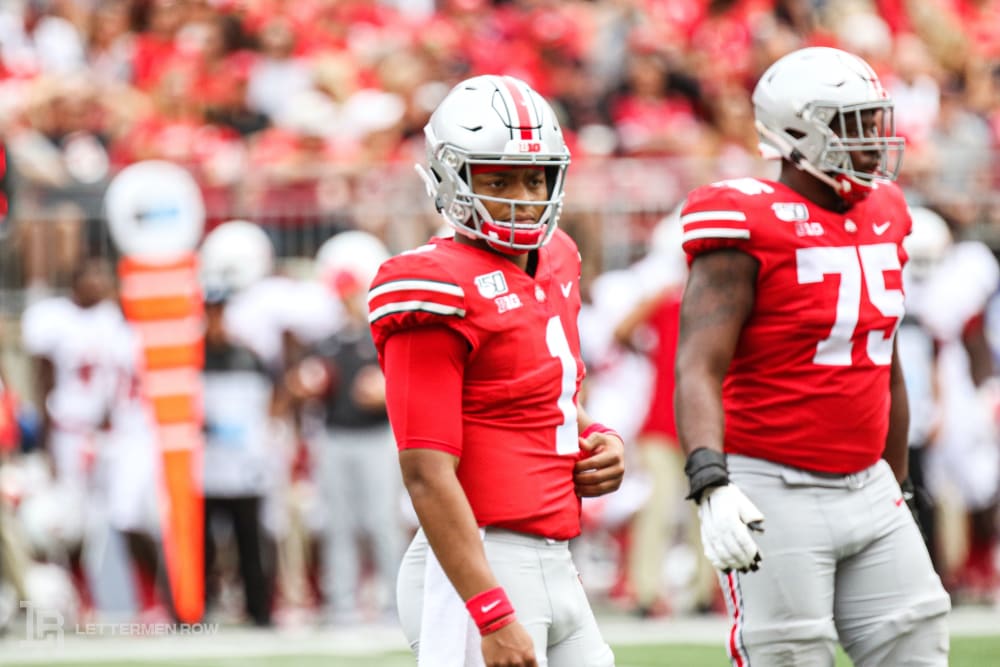 The hype was probably reaching unreasonable expectations for the highest-rated recruit in school history. But all Justin Fields did in his debut was put four touchdowns on the board in the first nine minutes of his Ohio State career — and effectively launch a Heisman Trophy campaign before he had even played a full quarter.

Maybe that’s another premature conversation with Fields, because there were reminders that he’s still inexperienced and developing as a quarterback. But the glimpse at what he can do when Fields was turned loose as a runner, the accuracy and arm strength he flashed and the toughness he showed after getting popped a couple times all point to the sophomore having a chance to become a superstar for the Buckeyes. There are going to be stiffer challenges than the one Florida Atlantic posed, but it’s hard to see a five-touchdown outing in the first start of his career as anything but a sign of great things to come for Fields.

There were stretches in the second half where Ohio State appeared to be dialing back on the defense and was content to just let a handful of young guys get experience, even if it meant giving Florida Atlantic a chance to tighten up the margin of defeat. But the first half was enough to provide evidence that the rebuild of the Silver Bullets is working and a dramatic turnaround for the worst unit in school history is underway.

Ohio State had positives at all three developments, including Chase Young reintroducing himself as a game-changing force up front and Jeff Okudah playing like a first-round pick in the secondary. But it’s the much-maligned linebackers who really showed off some improvement, with Malik Harrison leading the way with a couple tackles for loss and one bone-rattling hit that set the tone for the defense as a whole.

Pete Werner also showed why he reclaimed his starting job and how he could be used in the Bullet/strong-side linebacker role, finishing with four tackles and a takedown for a loss while also doing solid work in coverage out in the slot. Another guy to keep an eye on after the opener? Baron Browning appears to be playing more freely and confidently and also chipped in a tackle for loss. 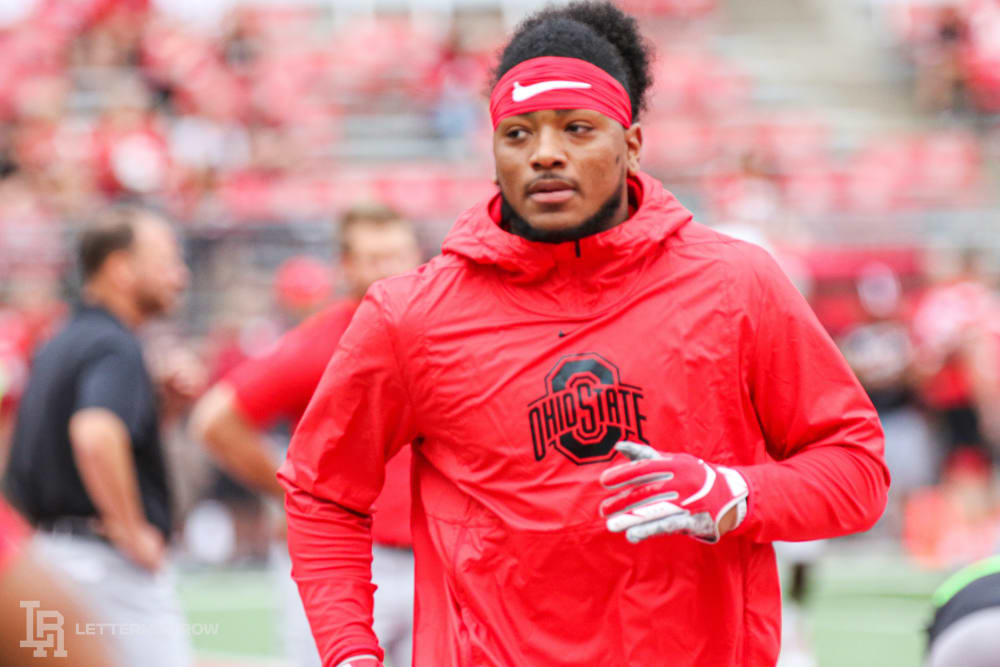 Ohio State linebacker Malik Harrison was all over the field in the season-opening win for the Buckeyes. (Birm/Lettermen Row)

Ryan Day had tried to play it coy about the new wrinkle in the playbook. But there had been signs since spring that the Buckeyes would be shifting away from the all-shotgun approach to snapping, and sprinkling in some under-center work for Justin Fields looks like it can be a major positive for the Buckeyes.

It’s kind of amusing that a traditional center-quarterback exchange can be seen as revolutionary for Ohio State, but after years of working exclusively in the shotgun in the power-spread system with Urban Meyer, it’s obviously a notable change. The benefits are already clear in the running game, where the Buckeyes can use an extra tight end as a blocker and let J.K. Dobbins get downhill more quickly or potentially use H-backs on jet sweeps. It’s also an effective tool for the play-action passing attack, and for Fields it allows him some pro-style snaps that can enhance his development at quarterback. Maybe more than anything, it’s a sign that Day isn’t content with the status quo and will always keep searching for new edges for the Buckeyes.

Maybe the touchdown catches won’t always be that wide-open and easy for Jeremy Ruckert. But it’s a safe bet that a lot more of them are coming his way as the sophomore continues to blossom at tight end.

Last year was a developmental season for the former highest-rated recruit in the country at the position, and there were growing pains. But Ruckert showed why he was so touted as he opened his second season with the program, grabbing a team-high four catches and scoring his first two touchdowns to help fuel the offense. Ruckert’s pass-catching ability has never been in question, and as his blocking ability improved, that has opened up even more chances for him to be on the field — and he’s going to be a major headache for defensive coordinators trying to slow him down in the red zone.

Chase Young was dominant. Jashon Cornell again proved that he’s one of the most versatile pieces on the defensive line. Tommy Togiai showed off his brute strength and gave a tantalizing peek at what he could become on the interior.

For the most part, the season-opening outing for the Rushmen has to be considered a success considering how short-handed they wound up being. Almost any program in the country would be pleased with that performance — which is scary because Ohio State can play so much better than that. Jonathon Cooper didn’t dress with an ankle injury and the Buckeyes played it safe with game-time decisions in Tyreke Smith and Tyler Friday, leaving the unit without three of its top options at end. Throw in the absence of defensive tackle Taron Vincent and the Buckeyes had quite a test of that vaunted depth for the first week of the season.

Given the way they responded, look out for the Buckeyes when they get back to full strength.