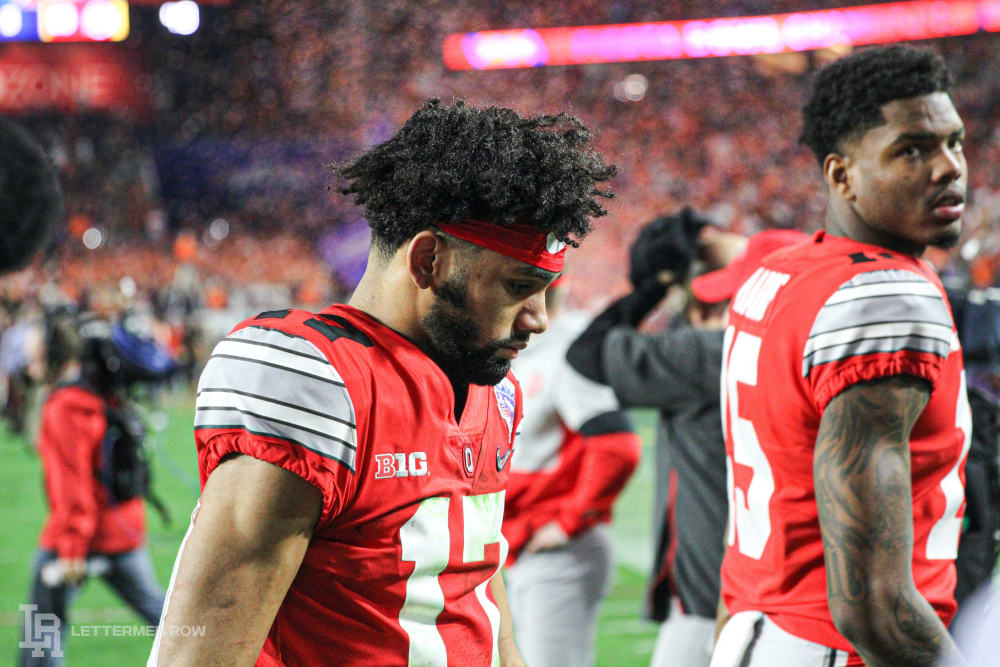 The first setback was going to come eventually, but it certainly didn’t look like the Fiesta Bowl was going to be where the streak ended.

Not with the Buckeyes rolling on both sides of the football. Not with Day continuing to pick his spots for aggression and dialing up perfect offensive plays. And not without a string of bad-luck breaks going against Ohio State in a game it was dominating in the College Football Playoff.

But Clemson got the best of Ohio State again, and the world got its first glimpse of how Day handles a loss. And considering how inexplicable several of those moments that went against him were, the first-year coach revealed plenty about his character on Saturday night at the Fiesta Bowl.

“Unbelievable [effort], I’m so proud of the way our team responded like that,” Day said. “[The negative plays] didn’t get us down. We kept fighting. We kept swinging all the way to the end. I couldn’t be prouder of the way we responded because that was hard to swallow.

“Just a lot of tears, a lot of disappointment, a lot of people angry in that locker room right now. There’s a lot of throwing helmets. A lot of just: ‘Can’t believe it’s over.’ So what do you say to a bunch of guys like that, other than you love them? The older guys, the seniors have left a legacy, and the younger guys have to learn from it. Wake up in the morning, the sun will come up and we’ll regroup.”

The Buckeyes are built for another run back to compete for championships, and bright days are obviously still ahead for the program when the sun comes back up in Columbus. But before moving on to what’s next for Ohio State, Lettermen Row is looking back at the lessons learned at the Fiesta Bowl. 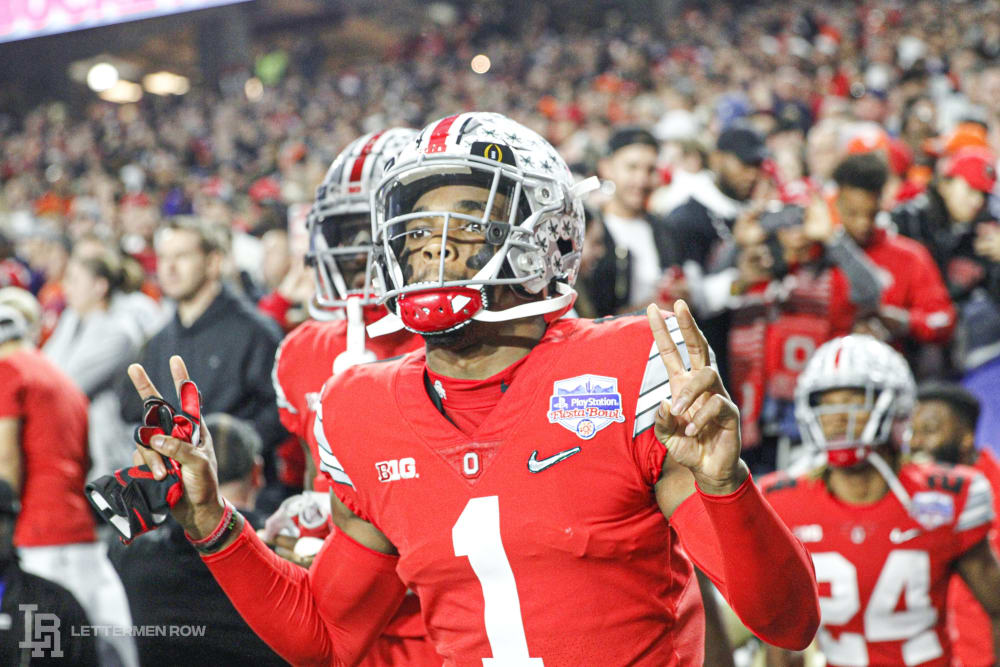 Ohio State cornerback Jeff Okudah lived up to his billing as one of the best players in the country. (Birm/Lettermen Row)

After falling completely flat during the previous visit to the Fiesta Bowl, dropping puzzling losses as massive favorites over the last two seasons and then coming up short of the four-team field in the last two seasons under Urban Meyer, there was plenty of uncertainty about how Ohio State fit into the national picture even while dominating the Big Ten crown. Considering what it took for the Buckeyes to not pull out the win against the defending national champions and how thoroughly they were able to dominate Clemson for long stretches, it’s impossible to deny them a spot at the table as one of the sport’s true powerhouse programs. There might not be a lot of value in that to brighten the mood for Ohio State, but that cachet is hugely important on the recruiting trail and could help influence the way the selection committee views them next year — something that could have helped it avoid the surprising drop to the second seed this season.

The breakdown on the loss-sealing interception was surprising for a number of reasons, starting with how reliable Chris Olave is at wide receiver, how careful with the football Justin Fields has been and the impressive chemistry the two have shown all season. So, the fact that Olave was breaking off a route and putting Fields in a tough spot was a shocker, but the sophomore wideout shouldn’t be as hard on himself as he was in the locker room after the game. Yes, that turnover ended the comeback bid and will be the final memory of the game. But Olave had already stepped up with a clutch touchdown catch for the Buckeyes, and there were probably a dozen plays before that point that would have prevented that situation from even happening. Olave is one of the hardest workers on the roster, and that play will probably only fuel him to new heights next year. 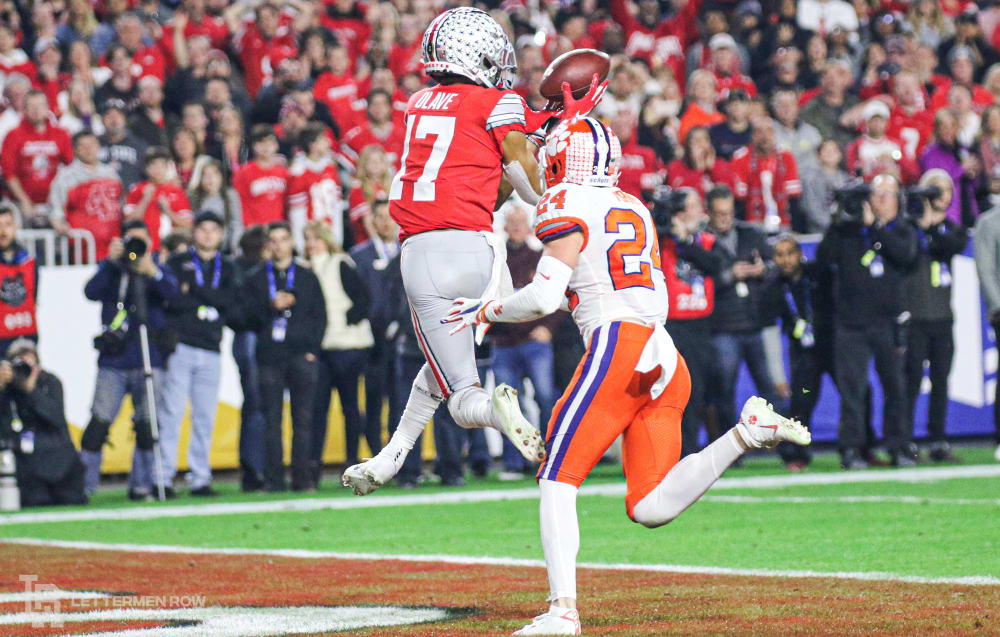 Shaun Wade offers another reminder of his value

For the second time in the last three games, the absence of Shaun Wade loomed large every time Ohio State gave up a play on defense. The redshirt sophomore defensive back was in the process of showing just why he’s so valuable to the Buckeyes schematically when he blitzed off the edge and leveled Clemson quarterback Trevor Lawrence. But when that sack was turned into a targeting ejection, Ohio State was never really the same and the flexibility in the secondary was limited — just like it was in the win at Michigan last month. If Wade elects to declare for the draft, his absence will again loom large in the reload heading into next season.

The Buckeyes haven’t heard an official decision from star tailback J.K. Dobbins yet, but it would qualify as a significant surprise if the junior elected to return for another season with the program. That puts the spotlight on Master Teague to step up in the Ohio State backfield, and he didn’t look quite ready for that role against a talented Clemson defense while managing just 9 yards on 7 carries while spelling Dobbins when he was injured. There was plenty of optimism about Teague early in the season as he formed a dangerous duo with Dobbins, and the second-year tailback came into the Fiesta Bowl ranked sixth in the Big Ten in rushing. But the drop-off in critical games was clear, and Teague is going to need to take another leap forward if he’s going to be the lead guy — which will be a role a healthy Marcus Crowley fights for next year as well.

There is no bright side to losing a Heisman Trophy finalist and arguably the most dominant defensive force in the nation. But the Buckeyes have proven repeatedly that they can reload the Rushmen. And the sack from Tyler Friday against Clemson, the key snaps played by Zach Harrison and Tyreke Smith and the return of Jonathon Cooper are all reminders that there will still be life after Chase Young declares for the NFL Draft. Plus, as long as Larry Johnson is around for the Buckeyes, there’s no reason at all to expect anything from top-notch pass rushing.