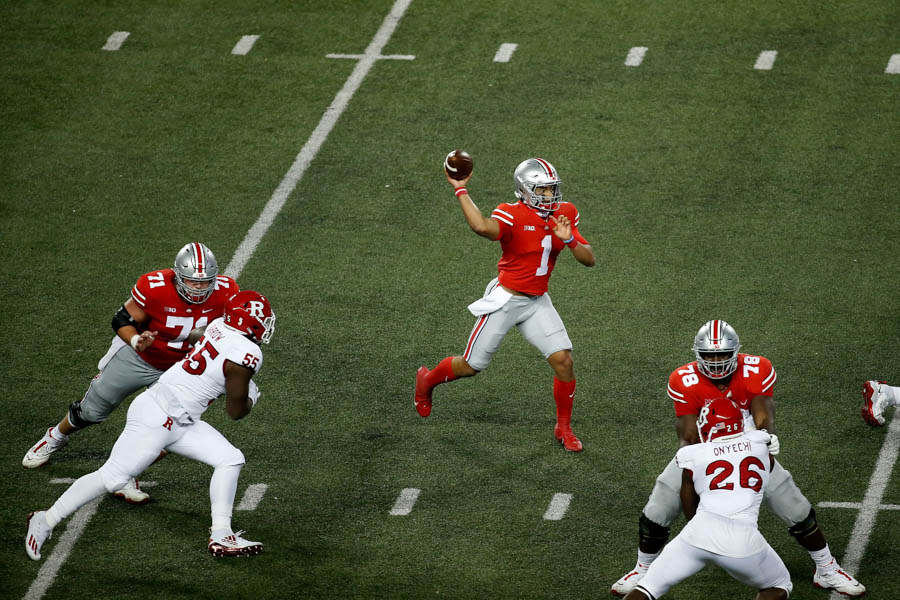 COLUMBUS — Justin Fields has completed 87 percent of passes this year. Yet, he’s somehow been even better than that for Ohio State.

Fields’ accuracy has headlined the season so far for the Buckeyes, with an absurd completion percentage that hasn’t accounted for a handful of dropped, on-target passes.

But that’s not that stat that has impressed Fields the most.

“The craziest? I would have to go with more touchdowns than incompletions, for sure,” Fields said before practice on Wednesday. “That’s the craziest one.”

Fields’ performance this season has been unquestionably great.

Have there been other aspects which allow room for improvement in Columbus? Sure. The defensive secondary is young and suffering from injuries. Penalties have been an issue the last two weeks.

But, it’s hard to nitpick a 3-0 team — especially a 3-0 team in a misshapen season such as this. The running game has improved each week, Ohio State’s offensive tackles have allowed one pressure in 110 pass blocking opportunities and the receiver group has been everything that was promised.

3-0 isn’t the end goal for this team, but it is a good baseline.

“It’s a work in progress,” Day said. “I’m really not disappointed in anything, to be honest with you. We want perfection here, we want to be the best in the country at what we do and we’re just not there yet.”

So, what has Lettermen Row learned about the Buckeyes through three games, and which statistics have defined their season? Start with these five: 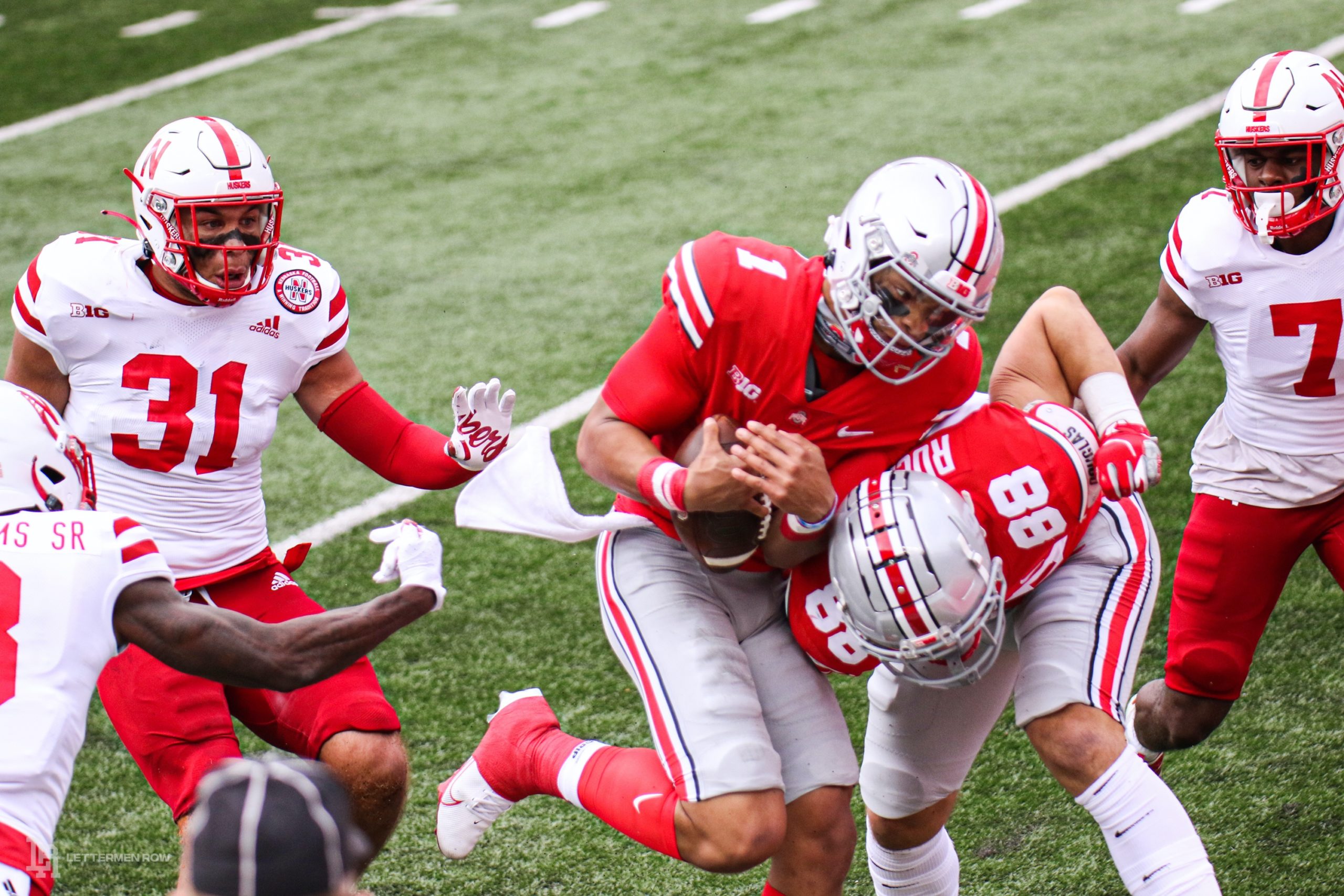 The selling point of Justin Fields’ game last year was his accuracy — the then-sophomore quarterback completed roughly two-thirds of passes in his first season as a starter. That pales in comparison to his numbers so far this season. Through three games, Fields has more touchdowns than incompletions, which has elevated him to the top of the Heisman conversation despite the Big Ten’s shortened schedule.

The last time an Ohio State receiver recorded three consecutive 100-yard receiving games was in 1998 when David Boston did so twice in the same season. Garrett Wilson matched that three-game mark with 104 yards against Rutgers. For now, Cris Carter holds the record of five-straight 100-yard performances.

If one elite receiver wasn’t enough, Chris Olave moved into a tie for seventh all-time in Ohio State receiving touchdowns with a pair of scores against Rutgers last Saturday. Olave’s 19 touchdowns are tied with Joey Galloway, Dane Sanzenbacher and Terry McLaurin. 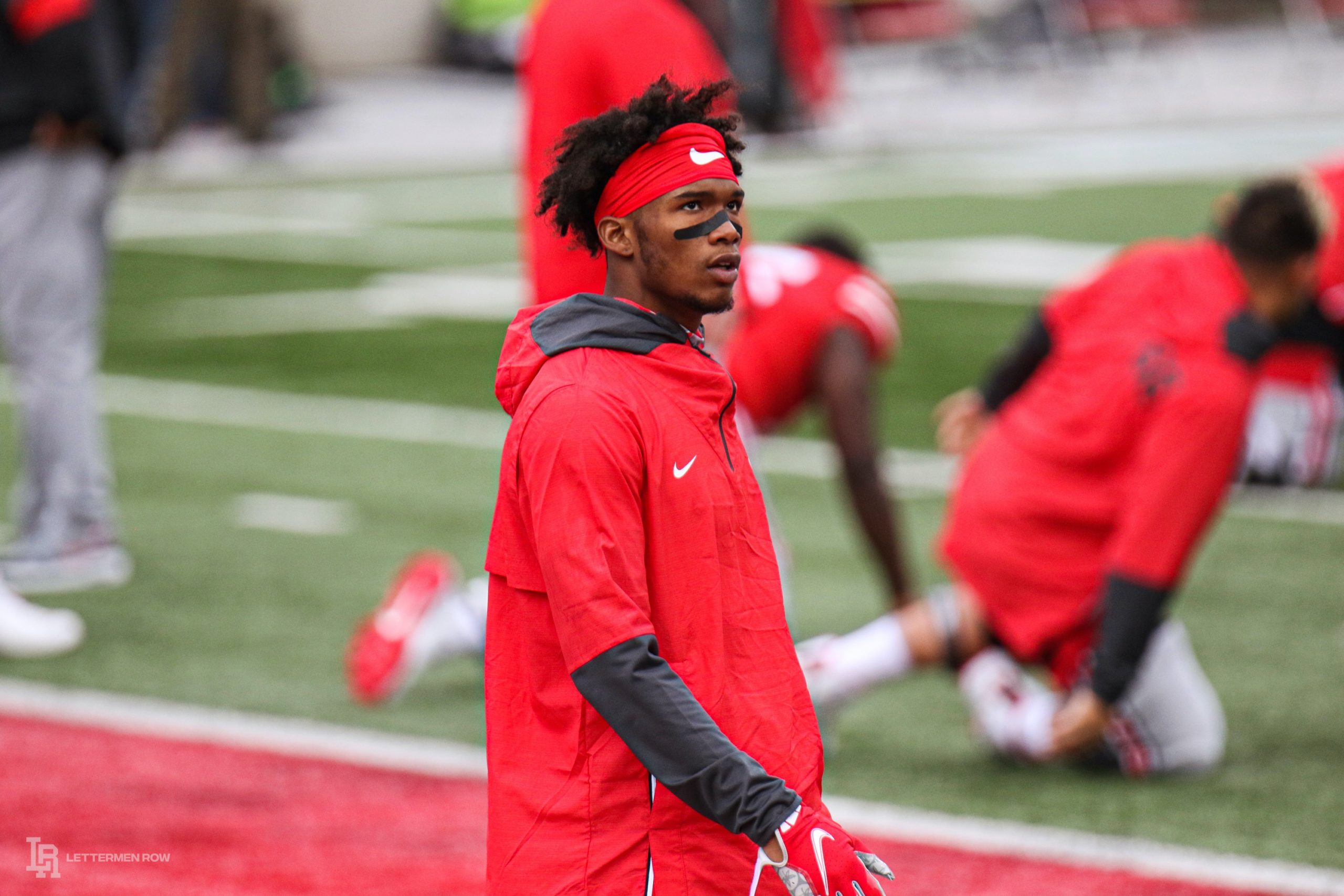 Ohio State ranks second nationally in both scoring and third-down offense among teams who have played at least three games.

The Buckeye offense averages 46.3 points per game and has converted 58.1 percent of third down attempts. They’ve ranked in the top 20 of both categories each year since 2016.

Wilson remains the primary passing target on third downs with eight receptions; next is Jeremy Ruckert with two.

Buckeyes can clean up penalty issues

Youth on the interior offensive line and defensive secondary certainly has contributed to the high number of infractions — which is understandable. But those are the kind of mistakes the Buckeyes cannot afford later in the season against upper-echelon teams in college football.

For as strong as Ohio State has been in the first half, the leads that it has taken into halftime have produced some lethargic second halves. The Buckeyes been outscored twice in the second half this season; 24-14 against Rutgers and 19-17 at Penn State.

Nonetheless, Ohio State is 3-0 and stronger finishes to games will likely come with experience as the season progresses.