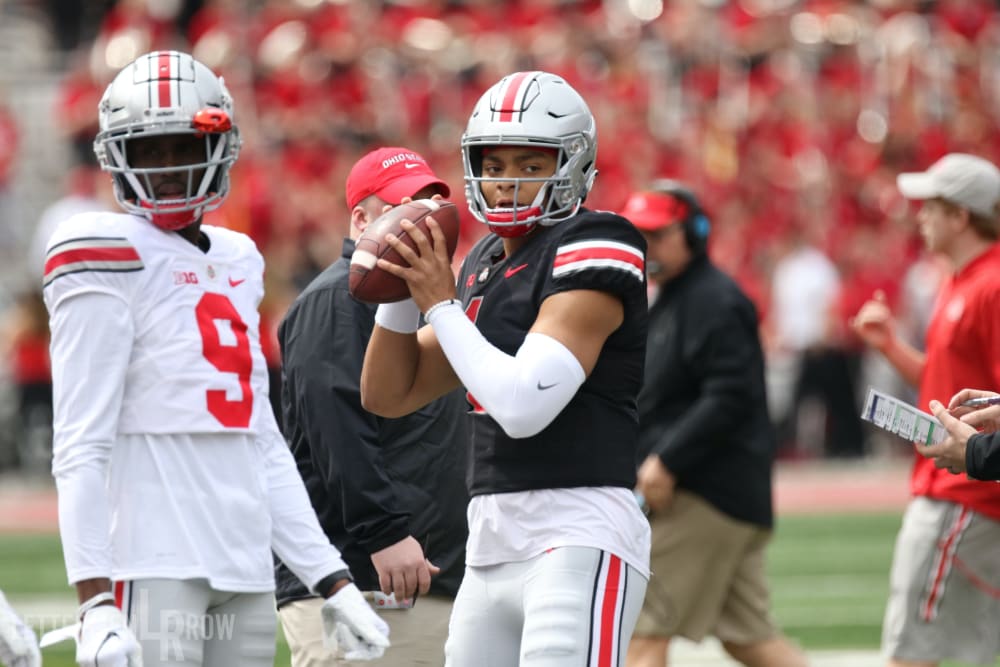 Ohio State quarterback Justin Fields had a performance for the ages at the Elite 11 two years ago. (Birm/Lettermen Row)

COLUMBUS — Justin Fields has seen the big stage before.

Certainly the Horseshoe is different than a television show, where he was featured on the Netflix documentary series QB1: Beyond the Lights, but he’s used to having his every move chronicled for the world to see. The first-year Ohio State quarterback has spent significant time in the national spotlight that’s now shining on him ahead of his starting debut.

And obviously the stakes are different suiting up for a powerhouse program looking to win a national title compared to a recruiting camp in the summer. But there is also pressure to walk into a huge national recruiting camp/combine/bonanza and know a matchup looms against Trevor Lawrence — the passer who led Clemson to a national championship as a true freshman and is widely considered the best quarterback prospect of the last decade.

But Fields did that. And during the Elite 11 in Los Angeles in June of 2017 and throughout The Opening Finals in Oregon later that month, he shined as bright as any quarterback to ever put on cleats for those recruiting bonanzas — if not brighter. 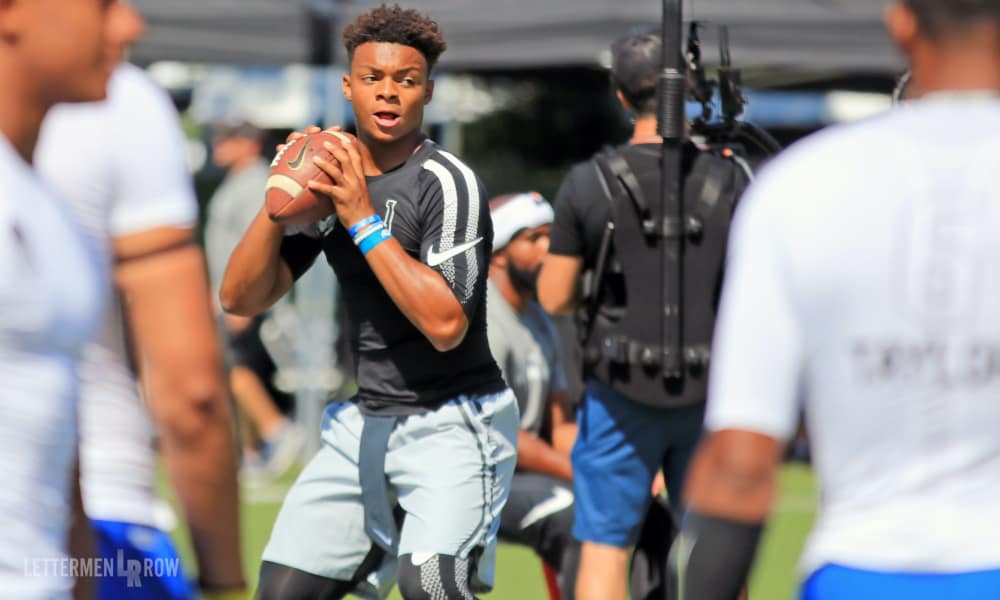 Justin Fields at The Opening in 2017, a week that solidified his standing as one of the country’s best prospects. (Birm/Lettermen Row)

“At the Elite 11 Finals, I watched Justin literally put on a clinic,” Quincy Avery, Fields’ personal quarterbacks coach, told Lettermen Row. “I’ve never seen someone go through that playbook — a high-level NFL playbook — and understand the routes and conceptualize them so quickly and then be able to make all the throws necessary to play football at a high level. He did it better than anyone I’ve ever seen over those three days.”

Even if only for that few-day stretch of flag football at Nike’s World Headquarters outside of Portland, Fields vaulted himself into the conversation as the country’s best quarterback prospect and one of the premier athletes of the internet recruiting age.

He was that good. Reluctant to take the word of Avery for fear of potential bias? Consider the breakdown of that memorable performance from Fields from then-foe, now-teammate Teradja Mitchell.

“You could tell from the get-go that they were the two best quarterbacks in the country,” Mitchell, who was tasked with defending both Fields and Lawrence that week in Oregon, told Lettermen Row. “The way they were analyzing the defenses, throwing the ball? You could tell. It stood out. Those were the guys.”

Those two would finish the recruiting cycle as the two best players in the country, with Fields checking in at No. 2 overall prospect behind Lawrence. But for those few days, it was Fields that struck the most fear into the hearts of defenders. It was Fields that no one wanted to have to play. 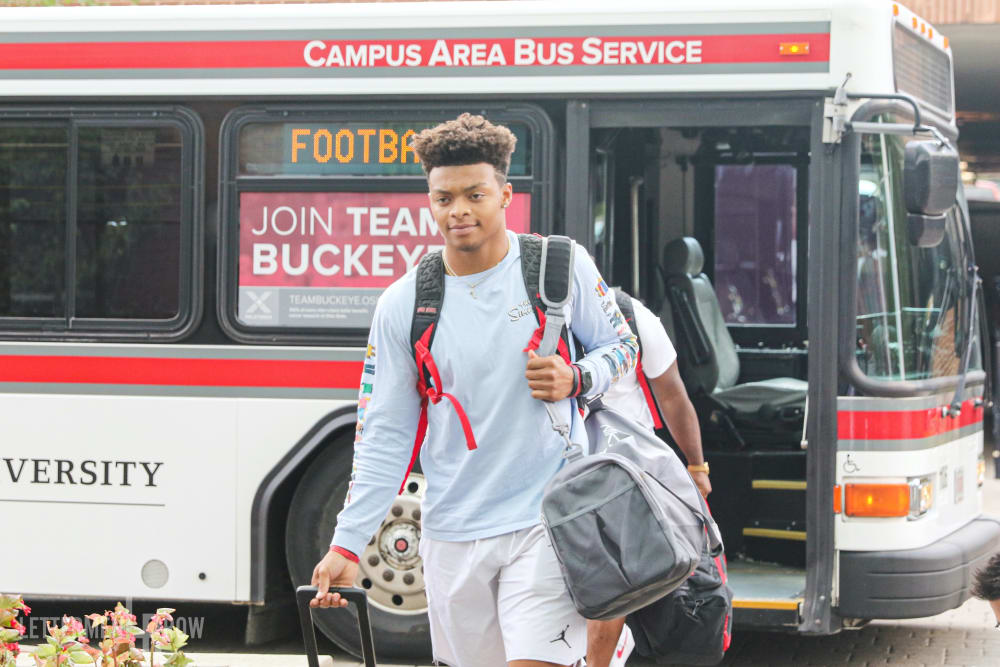 “We played Justin in the championship and he tore us up. After that I realized, this guy was legit. It was after the championship game. He exceeded expectations,” Mitchell said. “Like, ‘He can throw the ball.’

“Both of them can sling the ball, obviously, and on film Justin is more mobile but at The Opening? Justin was hot. He gave it to us.”

Trent Dilfer, who ran the Elite 11 for years, told Jeff Sentell of Dawgnation.com that were there an “All-time Elite 11 list,” that Fields would be on it.

“No question about it,” Dilfer said. “He handled this process from the time he was invited up to today as well as I’ve seen many NFL quarterbacks prepare for training camp. Many. Not just a handful. Many. Truly professional. His work, his note-taking, his engagement and the questions he asked, the buy-in or whatever term that you want to use there.”

It’s that kind of praise for the 6-foot-3, 230-pound sophomore that changed the conversation about the country’s best quarterback prospect in the summer of 2017. And it’s probably that sort of talk that changed the way Fields career would unfold.

Without those heightened expectations, maybe the rush to play at Georgia as a freshman or to supplant Jake Fromm as the starter never happens. Maybe Fields, a player Dwayne Haskins called “a freak” during last year’s Rose Bowl practices, would have stayed in Athens and taken the time to be developed by the Bulldogs.

But Ohio State is where Fields is now. The time at Georgia doesn’t matter.

Those days competing in and dominating at the Elite 11 and at The Opening against the best of the best may not matter either. But it at least serves as an example of what kind of talent Ryan Day has in his young quarterback. And it’s a reminder of what the ceiling is for Fields.

“Justin had such a great week there,” Ohio State tight end Jeremy Ruckert, who competed against Fields in Oregon, told Lettermen Row. “He was just a step ahead of everybody. I don’t think he even threw an interception the whole week. He just went at it the whole week, he went off that whole tournament.

“To see him perform the way he did, now coming back, you can totally tell why he made those strides because he’s continuing to get better and better every day. I could see how much he cares about taking care of the football and not forcing anything, I noticed that back then and I think I can start noticing it now.

“He’s not forcing anything. Coach Day does a good job of [emphasizing] where to go with the ball at certain times, and he’s really starting to grasp that.”

Now the challenge is to grasp what it means to lead a program like Ohio State. If the Buckeyes want to win a third-straight Big Ten title and compete for a national championship, then Justin Fields will have to be better than good.

He’ll need to be Elite.