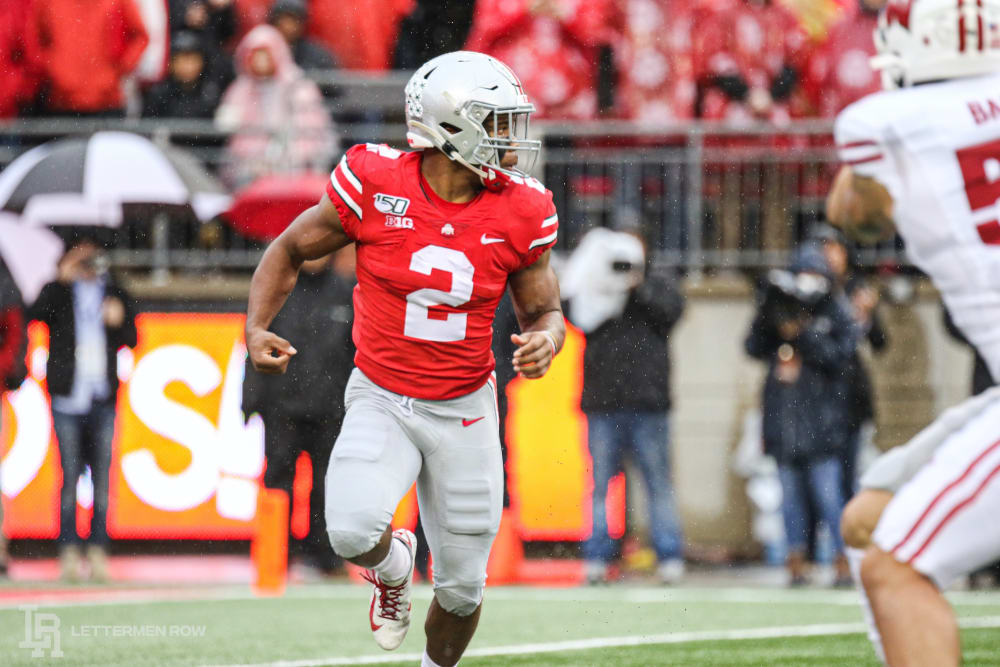 Ohio State running back J.K. Dobbins has been snubbed for a big award already this week. (Birm/Lettermen Row)

COLUMBUS — That Ohio State’s J.K. Dobbins runs with a target on his back is the metaphoric burden he shares with other great running backs, including Wisconsin’s Jonathan Taylor.

And as Buckeyes right guard Wyatt Davis revealed this week, Dobbins also always runs with a target in his mind.

“J.K. will tell us what he wants [yardage wise], and we try to get him up to that,” said Davis, one of the space-creating forces up front on the nation’s fourth-ranked rushing offense. “We try to get at least 200 yards rushing.”

Davis expects the Dobbins target to be in the 200 range again Saturday night in the Big Ten title game at Indianapolis when the Buckeyes take on Wisconsin in a rematch of the regular season tangle back in October, during which Ohio State held sway 38-7. That dreary day, Davis and the line launched Dobbins to 163 yards rushing and two touchdowns, and he added 58 yards receiving while the Ohio State defense put the usually prolific Taylor in near total eclipse with a season low 52 yards rushing.

In the rematch in Lucas Oil Stadium, there promises to be determination on display by both Dobbins and Taylor, the juniors each having made a substantial case to be considered the best running back in the nation this year: Dobbins with a career-high 1,657 yards rushing and 19 touchdowns, plus 200 receiving yards and two touchdowns; Taylor with 1,761 yards rushing and 20 touchdowns, and 201 receiving yards and five touchdowns.

For sure, theirs is a mutual admiration society, Taylor said during the buildup this week.

“I think J.K. is a great runner,” Taylor said. “I really like the way he finishes his runs. … He always finishes very physical. … We’re just going out there trying to make plays for our teams.” 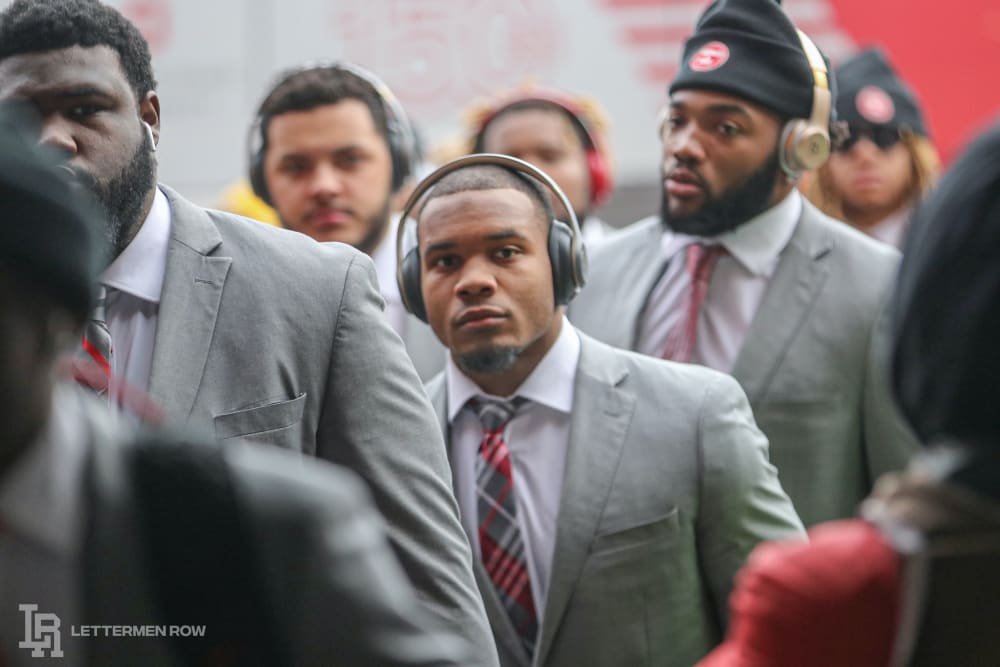 Ohio State running back J.K. Dobbins has been all business this season. (Birm/Lettermen Row)

Dobbins, coming off the most prolific total-offense day for an Ohio State running back in the history of the rivalry with Michigan (211 yards rushing, 49 yards receiving, four touchdowns), wasn’t made available to the media as the program went about preparations to try to win an unprecedented third straight Big Ten title game.

But there has been something obvious about his mindset this season, according to coach Ryan Day. That’s been especially on display in the four games against the best defenses against the rush Ohio State has faced — rushing for an average of 176 yards against Michigan State, Wisconsin, Penn State, Michigan.

“I’ve just seen a look in his eye that he’s hungry, and he’s just very, very determined to be great,” Day said. “But I think it’s a combination of him, the offensive line and the tight ends and their approach that they’re all in that together.

It’s the reason comparing production from tailbacks isn’t necessarily fair, Wisconsin coach Paul Chryst said, because it is such a teamwork exercise. Even if Dobbins is the first Ohio State back to rush for more than 1,000 yards in each of his first three seasons, and even if Taylor already has rushed for 5,932, the most in a three-year span in major college history, their third meeting will be determined a lot by the other forces involved.

“The similarity is they’re both really good, talented football players,” Chryst said. “They’re in different systems, right? And play for different teams. I think that makes it a little bit harder to say that one is this and one is that.

“But they both mean a ton to their team, and they’re both really, really good football players.”

Now consider that when Dobbins and Taylor met for the first time, as celebrated freshmen in the 2017 Big Ten title game, Dobbins out-rushed him 174-41. At game’s end Dobbins was handed the Archie Griffin most valuable player award by its namesake.

Also remember that when the conference season awards were announced this week, while Dobbins and Taylor were named the first team running backs, Taylor was named the Ameche-Dayne Big Ten running back of the year for the second straight year, something only Penn State’s Saquon Barkley and Wisconsin’s Montee Ball had accomplished before.

That’s why Davis and the Buckeyes offensive linemen expect Dobbins to be at his motivated best on Saturday night, and why they’re obligated to be the same. Versus their tougher challenges this season, theirs has been a relentless and symbiotic relationship.

“If we just give him the slightest crease he’ll pop it open and make a big one,” Davis said. “It’s exciting.

“And that puts even more pressure on us: ‘All right, we’ve got to go do this for J.K., and we’ve got to play even harder.'”