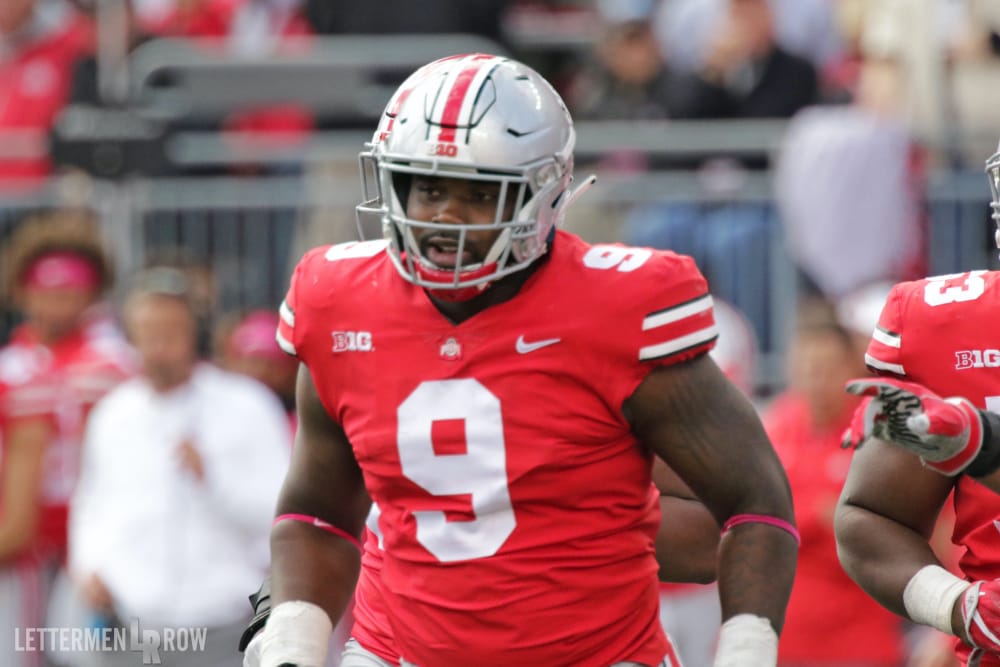 COLUMBUS — It’s not exactly a whistle-while-you-work approach for Ohio State.

But according to defensive tackle Jashon Cornell, a distinct feel-good atmosphere has permeated the unbeaten Buckeyes, ranked No.1 in the first College Football Playoff rankings — and it’s paying off on the playing field.

He and fellow defensive tackle Davon Hamilton especially have emerged as a force inside, helping set the table for — among others — stellar defensive end Chase Young, who with credit for just half of a sack on Saturday against Maryland would tie Vernon Gholston’s school season record of 14. 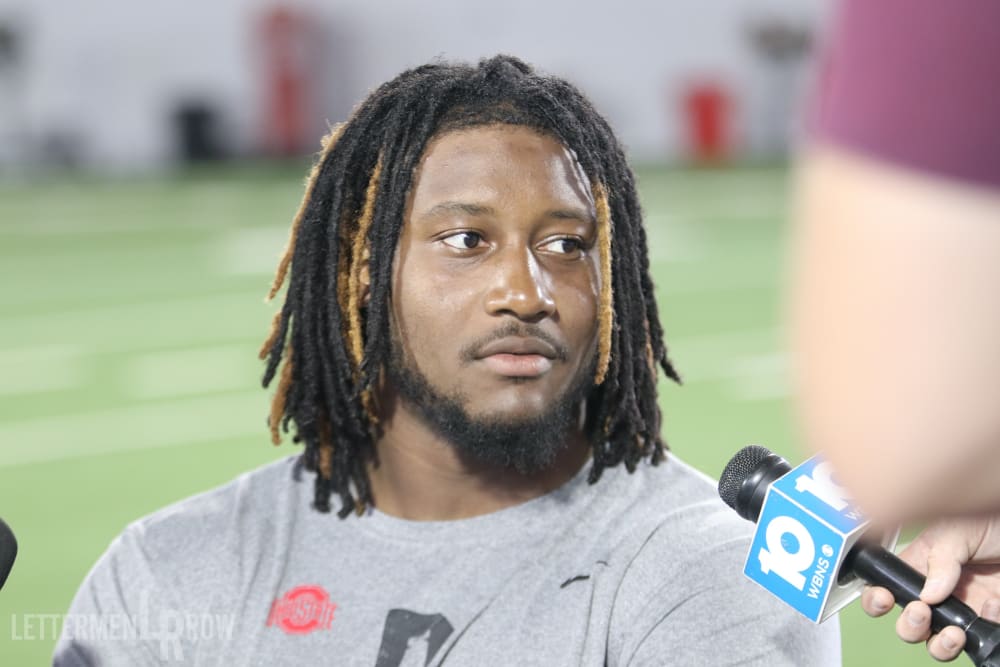 Ohio State defensive tackle Davon Hamilton has been in the thick of the action for the Buckeyes. (Birm/Lettermen Row)

Past the spectacular stats, though, it’s in the fundamental roots of defensive play where Cornell and Hamilton, and the fellows that rotate in for them such as Robert Landers, Tommy Togiai and Haskell Garrett, have helped pave the way for what’s been an about face for the defense compared to a year ago. In a sample serving of defensive statistics through eight games, Ohio State leads the nation in scoring defense (7.9 point avg.) and in fewest passing yards allowed (132.8), is No. 2 in total defense (224.3) and No. 9 against the rush (91.5).

That last category is especially noteworthy this week on an anniversary of sorts for the 52-51 win over Maryland in which the Buckeyes were gashed for 339 yards rushing — including 298 by running back Anthony McFarland, who had breakaway touchdown gallops of 81 and 75 yards. It was the poster game for what ailed the Buckeyes who wound up an abysmal No. 72 nationally in total defense (403.4).

When Day took the whistle from Urban Meyer following the Buckeyes win over Washington in the Rose Bowl, Day made sweeping changes on the defensive staff. Gone were four coaches, including coordinator Greg Schiano. Welcomed in were coordinator Greg Mattison and linebackers coach Al Washington from the Michigan staff, co-coordinator Jeff Hafley from the San Francisco 49ers and assistant defensive backs coach Matt Barnes from Maryland, while venerable line coach Larry Johnson was retained.

That the new Ohio State staff has clicked is an understatement, and so is the initial statement from Mattison about the desire of “not letting the scheme get in the way of good players just playing the game.” It has been embraced, Cornell said.

“I think it’s just letting us play,” he said. “And that’s one thing that we’re doing, just playing ball.”

Nowhere is that more evident than by the way he and Hamilton have gotten after it on the inside. It’s been nothing fancy.

“It’s pretty much man on man, like it’s you versus that guy across from you,” Cornell said. “You’ve got to win your one-on-one battle first before we do all the extra stuff.

“That’s one thing that we strictly know now, that we attack the line of scrimmage. If you can beat that man one on one, if you can beat the double team, then we’re fine. We can play ‘base’ the whole game. All you’ve got to do is win your one-on-ones, and that’s one thing we’ve been doing really well this year.”

Not that they’re just winging it. Like the way they throttled Wisconsin, which has one of the reputed great running backs, Jonathan Taylor, and running attacks in the nation two weeks ago. It was an acid test for the revamped rush defense.

“Coach Johnson – that’s one thing we stressed in the off-season is fitting the run,” Cornell said, meaning to maintain gap responsibility through the initial part of a play. “That’s one thing I feel like we have been doing really well is being able to fit the double teams and being able to fit the base box, understanding the concept of the offense.

Past that is the sense camaraderie within the ranks.

“We learned not to be selfish,” Cornell said. “You want to play for yourself sometimes, but now … the team, it’s like we’re playing for each other. We’re not arguing, we’re not yelling at each other, we’re not getting down on each other. If a player makes a mistake we’re pushing them up: ‘We’ve got ‘em on the next play.’

“That’s one thing that not we’re doing that we did previously, we’re not playing selfish. … We’re playing for each other. I feel like this is just a brotherhood now, and it’s a really strong brotherhood. I’m not saying we didn’t have a brotherhood before, but now the bond we have for one another, it’s really different this year.”