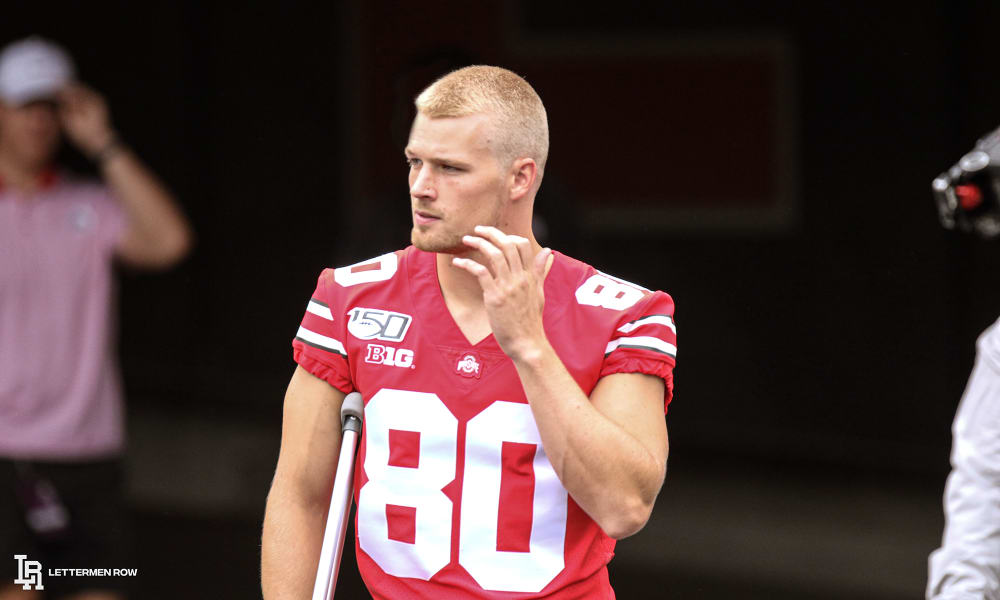 Ohio State captain C.J. Saunders will miss another game for the Buckeyes this week. (Birm/Lettermen Row)

COLUMBUS — Ohio State will again be without two senior captains when it takes the field at the Horseshoe.

And with the degree of difficulty going up against visiting Cincinnati, there will be even more pressure for other Buckeyes to step up and carry the load with Jonathon Cooper and C.J. Saunders still out of the lineup.

Those two veterans were joined by defensive tackle Taron Vincent on the list of notable unavailable players released by Ohio State on Friday. But the absence of Cooper on the defensive line and Saunders as an offensive weapon at H-back continues to linger as an early challenge for the depth of the Buckeyes.

“I mean, it affected us [at H-back] because C.J. as the backup going into the preseason,” Ohio State coach Ryan Day said on Thursday. “His absence was felt — and a little bit on special teams as well. But we have some good depth there, and we’ll be OK moving forward.”

The Buckeyes survived just fine in the opener last week against Florida Atlantic, and the way the program has recruited over the last couple seasons has certainly provided talented options ready to step in off the bench.

On offense, the load is likely to get heavier for K.J. Hill until Saunders returns, though it remains unclear just how long he’ll be out after arriving in the stadium last week using a crutch and wearing a compression sleeve on his left leg. Sources have indicated to Lettermen Row that the former walk-on wide receiver could potentially miss a few more games with that undisclosed issue, which could put Jaelen Gill in position to get on the field more.

“He’s kind of in the mix,” Day said. “He’s right there and providing some depth for us, and the more he plays, the more experience he gets, the better it will be for him.”

Ohio State also turned to some fresh faces on the defensive line with Cooper unavailable and fellow defensive ends Tyler Friday and Tyreke Smith also held out despite going through some pregame warmups. The primary short-term fix for the Buckeyes, though, was sliding defensive tackle Jashon Cornell out to the edge, a move that paid off with a pair of tackles for loss, a sack and a forced fumble from the senior.

With Cornell expecting to be back at three-technique on Saturday against the Bearcats, that suggests a clean bill of health for Friday and Smith — and neither were listed as being out for the Cincinnati game. Here’s the full availability report as announced on Friday by the program, making note that Ohio State doesn’t differentiate between injuries or disciplinary matters: