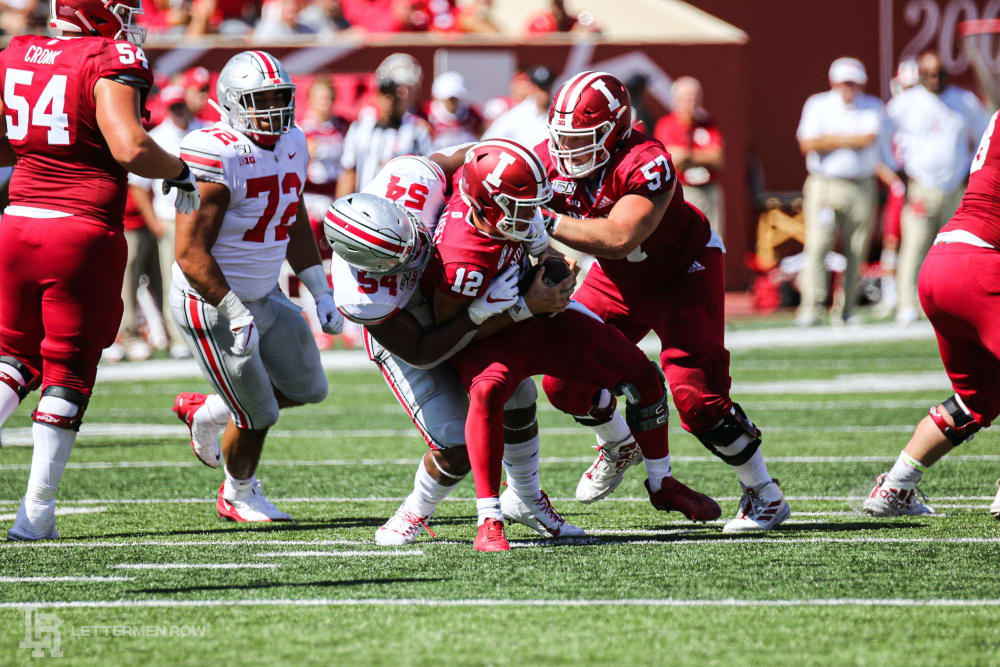 The Buckeyes had an unexpected off date and a game cancelled at Maryland. They are undefeated but not technically in first place in the East Division of the Big Ten. And the most important game of the season is now against Indiana.

None of that would have made sense back in March. But that’s the situation Ohio State finds itself in as it prepares to host the surging Hoosiers for what has effectively become the division championship on Saturday in the Horseshoe.

“There are a few positives to it, but we’re very disappointed that we weren’t playing [at Maryland],” Day said last week. “If you’re going to look for positives, it’s an opportunity for our guys to continue to rest and heal — although we haven’t played very much football. There’s less exposure going to Maryland, and it allows a few more preparation for Indiana.

“This is the first time we’ve really been affected by it, through no fault of our own. But this is the way it goes. It’s going to be difficult moving forward. We have to continually make sacrifices, and we’ve done that. But at any moment, it can turn sideways.”

That possibility always exists this year, of course, and the Buckeyes experienced that firsthand on Wednesday with Maryland surprisingly calling off the game just three days before it was supposed to be played. At this point, everything appears on track for this unexpectedly important clash for Ohio State and Indiana, so Lettermen Row is getting ready for the week ahead like normal with with Five Questions. 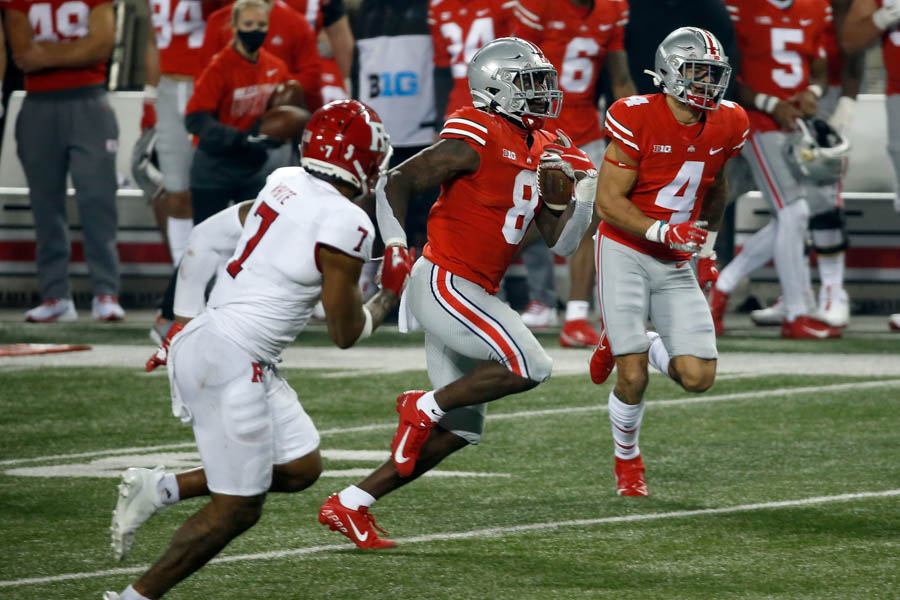 Ohio State running back Trey Sermon had an extra week to recover from an injury. (Courtesy/Ohio State Dept. of Athletics)

How much healthier are Buckeyes now?

Ohio State was expecting to have Trey Sermon available for practice last week, so the senior tailback was probably going to be available for the trip to Maryland after his injury scare. The Buckeyes have also been optimistic that freshman cornerback Lejond Cavazos would be able to make his debut soon after dealing with a training-camp injury, and the unexpected off date may have helped bring him closer to full speed.

For the most part, though, the Buckeyes haven’t had many health concerns through three weeks. And that’s also not really enough games for there to have been much desire to take a breather. If Ohio State was going to get an unscheduled  break, it surely would have preferred it to come later in the nine-week Big Ten sprint — although given an option, it would have obviously elected to play every week instead.

The Buckeyes were again a massive favorite for the trip to Maryland, and there’s very little chance that suspect defense could have done anything at all to slow down Justin Fields and his dynamic set of weapons. But there was some intrigue with the Ohio State secondary as it continues to work through depth and relative inexperience issues, and Maryland could have provided a bit of insight into how that reloading process is coming along ahead of what now figures to be a decent test from Indiana.

The Buckeyes have to weigh their options in a couple spots, starting with safety where Marcus Hooker has struggled with missed tackles and in the third cornerback role where Tyreke Johnson still doesn’t appear to fit. What’s on the table for Ohio State? Josh Proctor is currently doing a little of everything in the secondary, but he might be better suited to the job as the primary safety. And after flashing late against Rutgers, Ryan Watts might be ready for a longer look as the extra cornerback in the rotation.

There are no signs at this point that Indiana is dealing with any COVID issues on campus, but the same was true with Maryland at this time last week. So, it will surely be somewhere in the back of the minds of the Buckeyes that nothing is guaranteed after what they just went through, which if nothing else is an added distraction it will need to tune out the best it can.

Ohio State did get some good news from the Big Ten over the weekend when a change was approved by the league that allows teams to schedule conference games against other opponents if multiple cancellations happen during the same weekend. That wouldn’t have changed anything for the Buckeyes on Saturday since Maryland was the only team to shut down its program. But it does upgrade the safety net since right now the three-time defending league champs can only miss one more game before dropping to the current minimum threshold to play in the Big Ten championship. 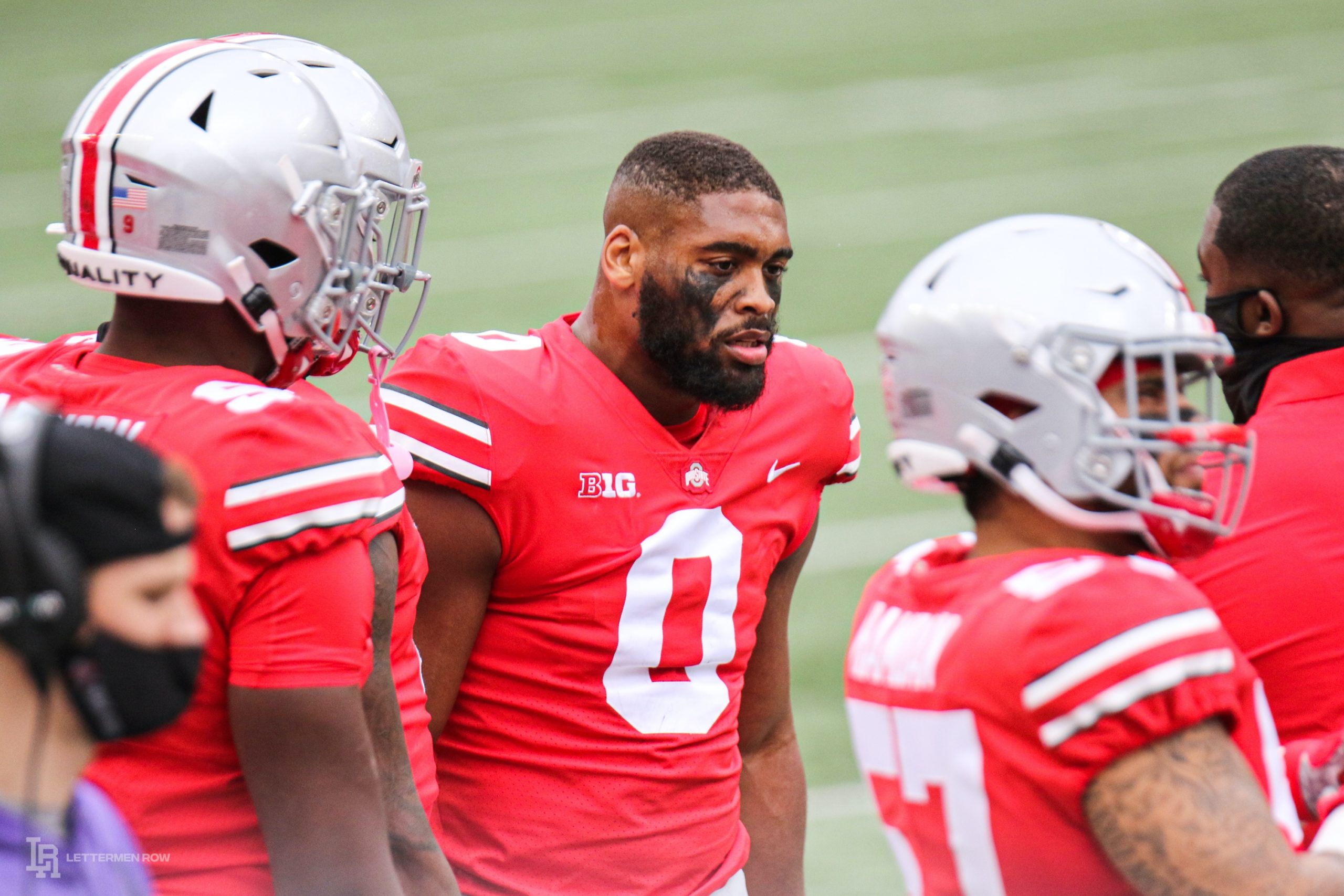 Can Rushmen dial up pressure on Indiana?

Sacks aren’t the only way to measure success for a defensive line, but those are clearly the top goal for that unit. It will rub the Rushmen the wrong way that the only sack in the easy win over Rutgers came from a linebacker, and that’s a challenge that captain Jonathon Cooper will no doubt be throwing down to his pass-rushing buddies.

The Buckeyes are again seeing more quick-hitting throws from opponents in an effort to protect their quarterbacks and limit the effectiveness of guys like Cooper, Tyler Friday, Zach Harrison and Tyreke Smith. That’s not a new development, of course, since teams have been trying to do that for years in an effort to avoid letting the Bosa Brothers or Chase Young single-handedly wreck their game plans. It’s up to the new wave of Buckeyes to adjust and find ways to get home with hits on the passer.

What more can Ohio State offense do?

The Buckeyes keep adding new wrinkles to an already potent offense, and it’s been fascinating even early in the season to see just what else Ryan Day and Justin Fields cook up in the lab as they keep building the attack. Considering the depth and versatility on hand at the skill positions and with a veteran offensive line, there’s almost no limit to what the Buckeyes can do as Fields gets more comfortable in command with every start.

Ohio State has already unleashed a few jet sweeps that have been effective at getting Garrett Wilson the football on the perimeter in a different way, and that action could lead to other opportunities for the ground game moving forward as teams get more concerned about the sophomore receiver — and the potential that Fields might keep it himself more often. Indiana coach Tom Allen has struggled mightily to slow down the Buckeyes offense, and this version might be the most dangerous yet.