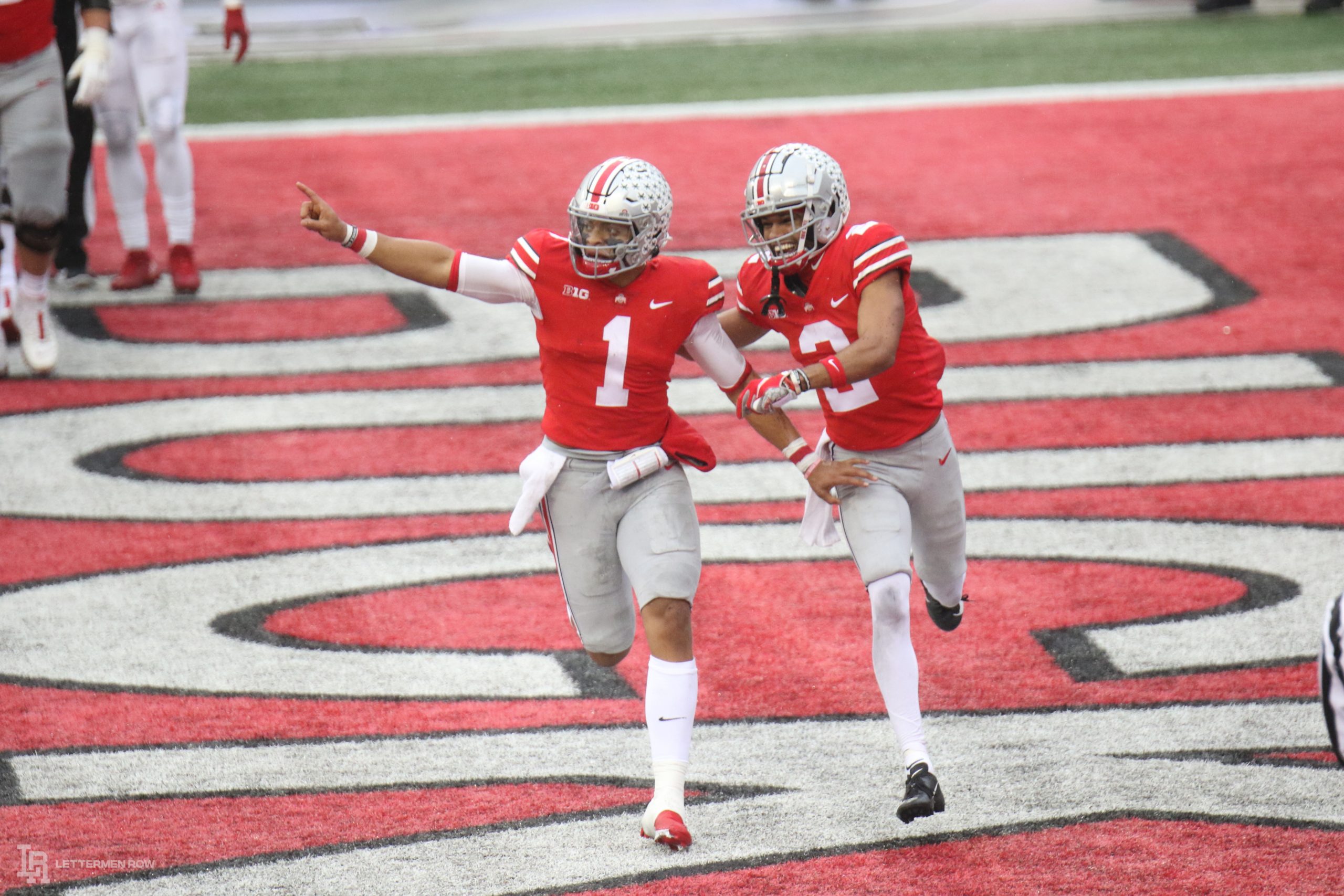 COLUMBUS — Simply playing the game isn’t a guarantee this season for Ohio State.

The Buckeyes haven’t needed any reminder about that tenuous nature of the schedule in this pandemic-challenged year, particularly since they’ve already had one game cancelled.

So, getting to Illinois and putting on the pads Saturday against Illinois will count as a victory all by itself after multiple sources confirmed to Lettermen Row that there were positive tests within the Ohio State program this week. The trip remains on as scheduled after the Buckeyes were below the Big Ten-mandated thresholds and able to continue practicing ahead of the battle for the Illibuck Trophy, but just staying healthy was the first mission.

Now once the Buckeyes get to Illinois, of course, there’s still the matter of handling their business as four-touchdown favorites on the field. And clearly Ohio State wants to make the most of any opportunity it’s given to play, improve and assert its dominance on the Big Ten.

“After four games and a body of work, we can do a great job this week of identifying the issues that are holding us back from pulling away from teams, address them and get better right here,” Day said this week. “I was hoping that, going into the Maryland game, it was the same way. We had that week off. So now, we have this Indiana game on film. Now, we have to really spend a bunch of time and make sure that everything that we’re doing is toward getting better.

“That’s what good teams can do. I think there are a lot of good things going on, and I don’t think we’re that far away.”

How close can the Buckeyes get to where they want to be against Illinois? The Lettermen Row crew is again unanimously expecting a win from unbeaten Ohio State, so the Bold Predictions are going deeper than just the score ahead of the trip to visit the Illini. 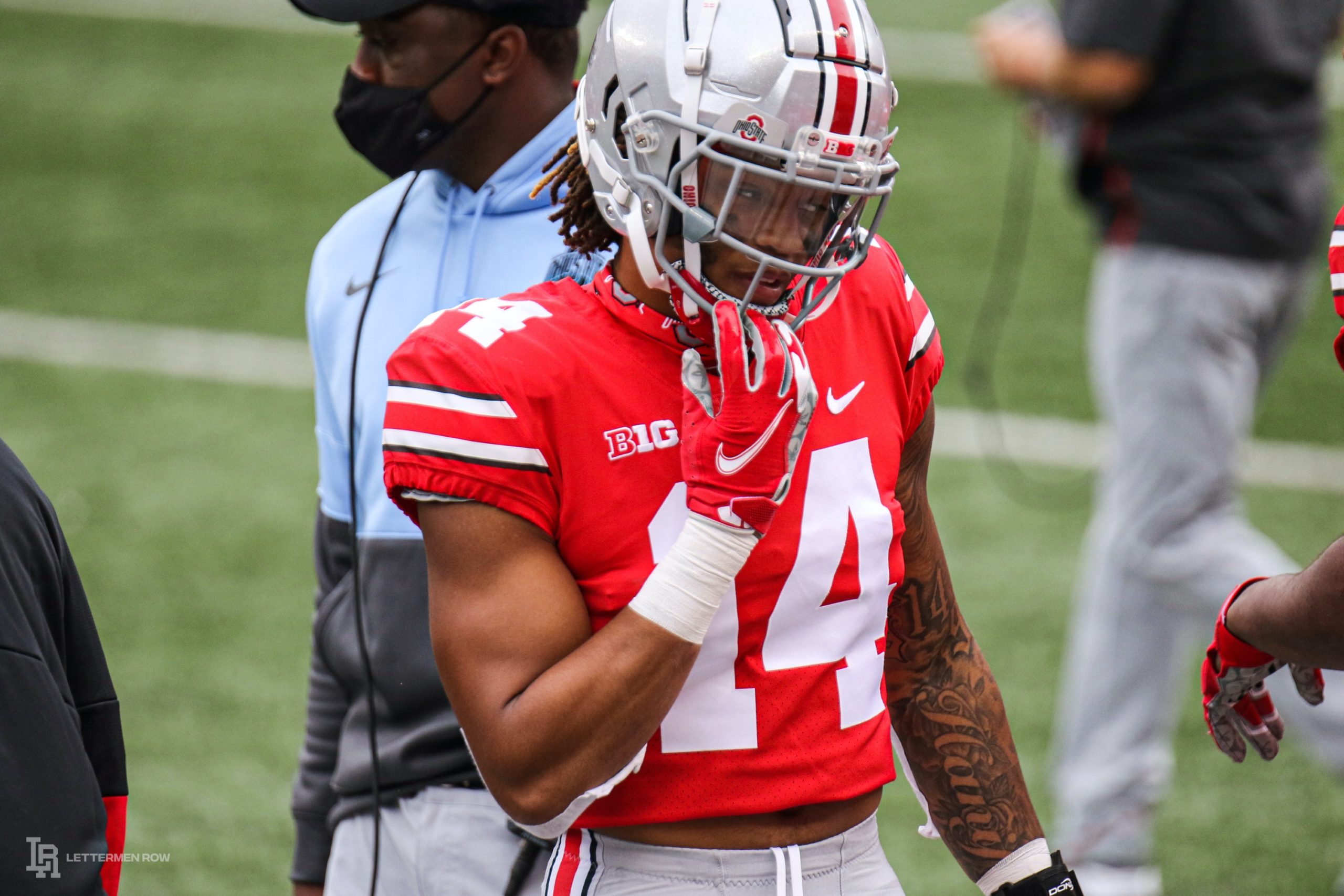 Ohio State defensive back Ronnie Hickman could be a secondary solution. (Birm/Lettermen Row)

Ohio State has hinted there will be different combinations of personnel in the secondary, and it’s surely overdue given the second-half struggles there in each of the last three games. The Buckeyes didn’t point to any specific individuals, but it’s clear that the safety spot has left plenty to be desired — and it’s time for one of the promising young players waiting int he wings to earn a crack at it. Now fully healthy after missing all of last season while rehabbing an injury, Ronnie Hickman has been opening eyes with his work on special teams and with limited snaps on defense. The expectation here is that Hickman will get a chance to show what he can do, and he might just come back from Illinois with a starting job secured.

The Buckeyes passing game has been as efficient as anyone in the country, and though a lot of the focus remains on Garrett Wilson — who will record his fifth 100-yard game in a row on Saturday as well — Chris Olave has lived up to all the offseason discussion centered on him. He’s put himself into the conversation as a first-round pick in next year’s NFL Draft, and this weekend he’ll cement that reputation. Against the Illini, it’s Olave’s turn to step into the spotlight and he’ll take full advantage of it, recording two long touchdown receptions among his seven-catch, 200-plus yard afternoon.

Ohio State finally got its run game going against Indiana last week, and since then, all the attention has been on Master Teague, who posted 169 yards rushing and two scores. But the name being left out of the conversation is Trey Sermon, who had nine carries and averaged 6.7 yards per attempt, showing explosiveness with the football for the first time at Ohio State. Sermon will finally break a long run for a touchdown of more than 60 yards with an impressive scamper against Illinois. 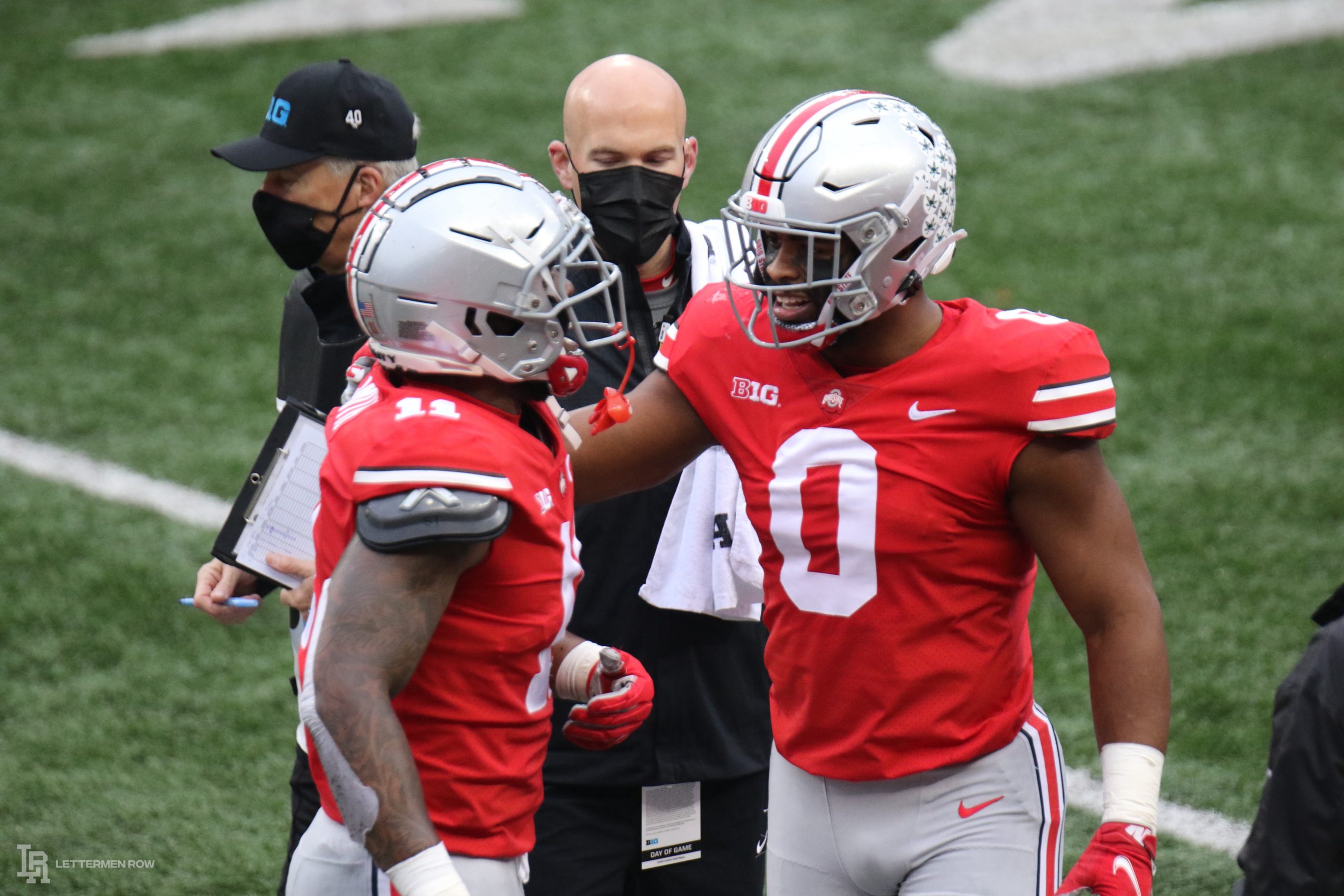 Tim May: Ohio State racks up five sacks at Illinois

It’s Ohio State at Illinois, Covid 19-avoidance willing, and there is one number that has the critics of the defense screaming for more: Sacks. Ohio State has gained merely 11 through its first four games and had just two last week in the 42-35 win over Indiana, which otherwise attempted 51 passes. Sure, the Buckeyes created some quarterback hurries and hit Michael Penix Jr. many times. But the sack is the stat upon which defensive front-sevens are judged. Now look at the Illinois stats: The Illini have given up just 11. Something has got to give, and it will be the Illini pass protection. Look for the Ohio State defensive linemen to shut up their critics, at least for a week, with a minimum five-sack assault.

Will Crall: Master Teague will rush for 200 yards for Buckeyes

Master Teague is rolling into the weekend after the best game of his career, gouging Indiana on the ground for 169 yards on 26 carries. It’s clear that Teague has won the competition with Trey Sermon, and I expect we will see him as the featured tailback moving forward. Illinois is near the bottom of the Big Ten in rushing defensive, giving up 195 per game. It’s always windy and tough to pass in Champaign. This feels like a game where Teague will have a ton of carries — and as a result he will rush for over 200 yards.