Ohio States's offensive line paved the way for a brilliant day on the ground against Penn State.

COLUMBUS — Ohio State isn’t the one getting tested at this point.

After multiple games and a handful of matchups where opponents were bringing in top-ranked defenses into battles with the Buckeyes, it’s time to reframe the conversation.

Ohio State is a proven commodity, and it’s the one setting the standard. The only tests being issued are to the guys on the other side of the ball, and it’s up to them to stop the Buckeyes before they can really be considered a truly elite defense — a challenge that now falls to rival Michigan on Saturday in the Big House.

Buckeyes coach Ryan Day is going to trust his offensive line to block. He’s going to let J.K. Dobbins take as many carries as he can stand. He’ll turn dual-threat quarterback Justin Fields loose on the ground. And he’ll run the football until somebody can finally stop the top-ranked Buckeyes. 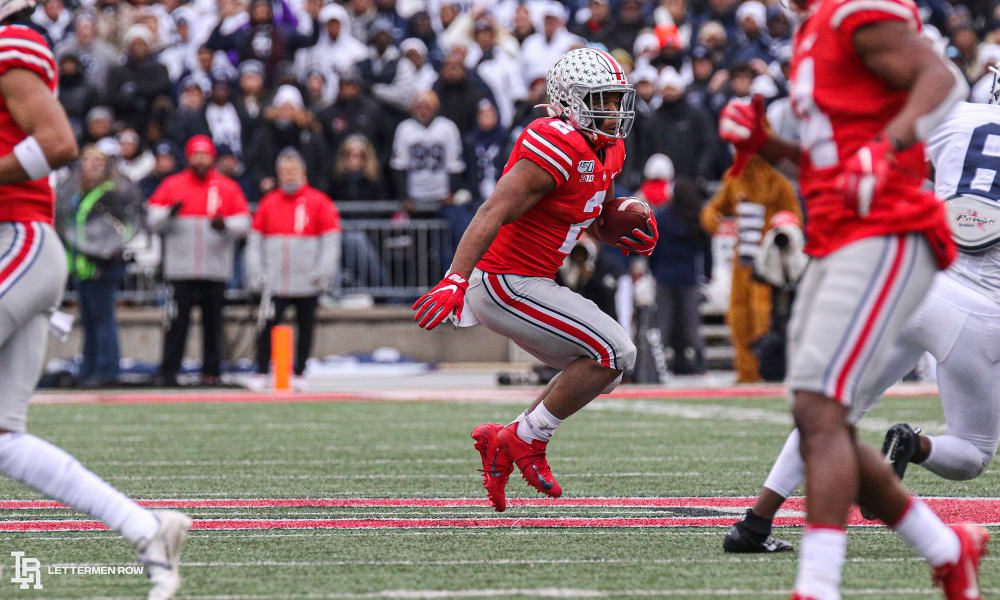 Ohio State running back J.K. Dobbins has had plenty of rushing room behind the Buckeyes offensive line. (Birm/Lettermen Row)

“Penn State had a very good run defense. … So, to win a game like that that was not clean shows the toughness that we have, because you walk out of that game thinking: Oh, we probably could have won a lot bigger than that.”

That was obvious from the outset with the Buckeyes marching directly down the field for 91 rushing yards and the opening touchdown — topping the season average Penn State allowed on the ground on the first drive alone.

It was a statement from Ohio State that it wouldn’t back down against anybody, and the offensive line in particular has allowed the program to rediscover a power ground game that simply didn’t exist on a consistent basis a year ago. Thayer Munford, Jonah Jackson, Josh Myers, Wyatt Davis and Branden Bowen have been the unsung heroes for the Buckeyes all year, and those five guys are the ones who will be critical in settling the latest edition of The Game.

What made that opening drive for Ohio State so impressive last week against Penn State? How have the Buckeyes been able to turn around the effort in the trenches this season? Where will Michigan pose a test for that powerful ground game? Former Ohio State offensive tackle Reid Fragel was back in the Lettermen Row film lab breaking down the film and answering those questions in the latest episode of BuckIQ.