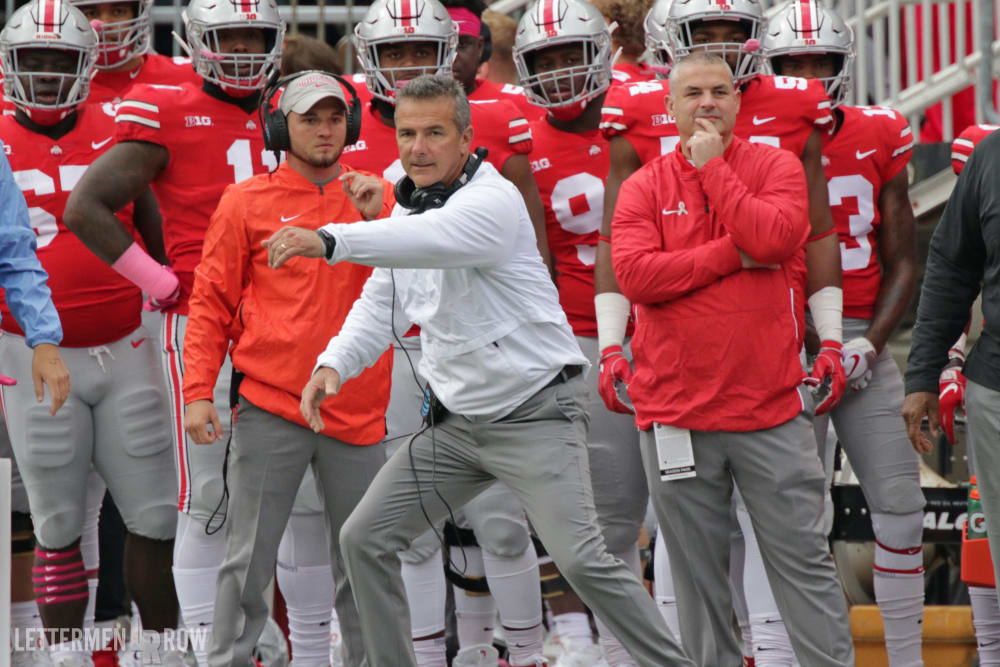 Urban Meyer and Ohio State are heading to Purdue with the Buckeyes looking to stay unbeaten. (Birm/Lettermen Row)

COLUMBUS — This was always the top pick as the sneaky, under-the-radar challenge for Ohio State on the path to another Big Ten championship.

Sure, everybody knows what kind of test looms in a Whiteout against Penn State and how rude of a host Michigan State can be for the Buckeyes. But championship teams always have to be prepared for the unexpected pothole, which obviously Urban Meyer and his program found out the hard way last season at Iowa.

So, if Purdue has always been circled as the one to look out for, maybe that will work in favor of the Buckeyes as they gear up for the tricky Big Ten road trip. Of course, the Boilermakers have been rolling offensively and will have a fired-up crowd for a primetime battle on national television, so that will present a different set of tests for unbeaten Ohio State.

But if nothing else, the Buckeyes shouldn’t be caught off guard by what’s coming in their last game for the month of October. Will they be ready? That depends on how they answer the Five Questions that Lettermen Row asks every Monday to set the scene for the week ahead.

How healthy will Ohio State be at Purdue?

The Buckeyes know they won’t be getting their superstar Nick Bosa back until at least November, and his absence as both a leader and game-changing force continues to be significant. But it’s the piling up of injuries to other starters that is really taking a toll on the team’s ability to live up to its enormous potential week after week. Ohio State was without its other starting defensive end on Saturday against Minnesota with Jonathon Cooper on the sideline, and linebacker Malik Harrison was also held out with a concussion. Throw in a short appearance for defensive tackle Robert Landers as he deals with a nagging issue, lingering health problems for cornerback Damon Arnette and the fact that defensive tackle Dre’Mont Jones isn’t at full strength and it’s easy to see why the Silver Bullets can struggle to find consistency. It bears watching to see just how much closer to clean bills of health the Buckeyes can get this week, particularly when it comes to Cooper and Harrison. 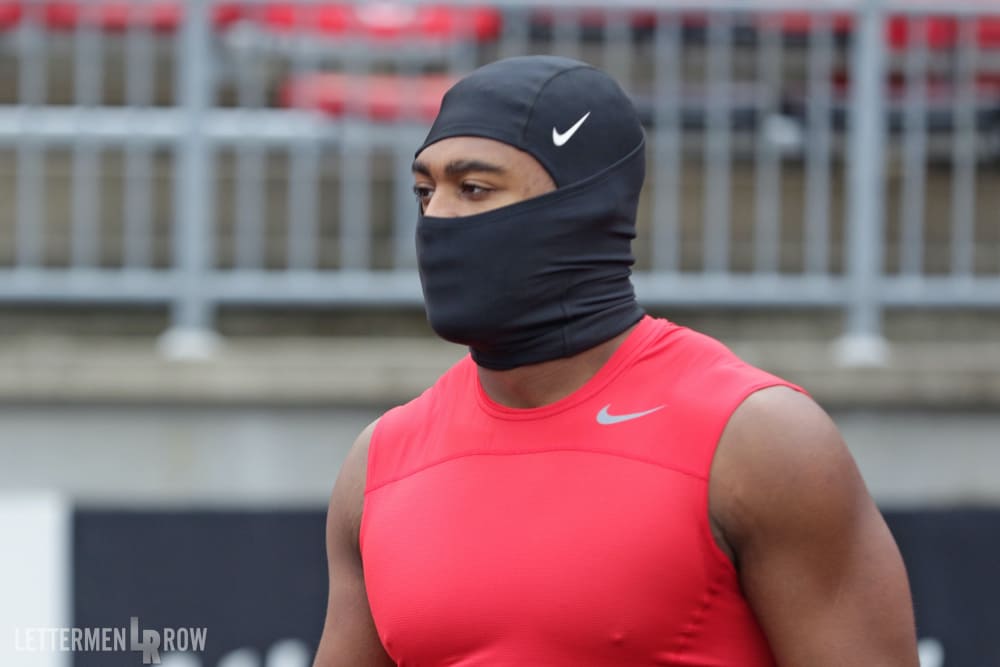 Ohio State defensive end Jonathon Cooper was held out of the win over Minnesota. (Birm/Lettermen Row)

Do the Buckeyes even need a rushing attack?

It’s possible that a passing attack which has been unleashed by Dwayne Haskins and racked up more than 860 yards over the last couple weeks might be all the Buckeyes really need. Now, that approach is obviously never going to fly with Urban Meyer around to lead the program, and it would certainly be to the program’s benefit if the coaching staff can start finding some answers for a stagnant ground game to hep balance the offense. But it’s worth at least mentioning that Haskins and that deep cast of wide receivers are close to unstoppable right now, and at times the only issue hurting the Buckeyes is actually trying to run the football the way it has in the past.

Few coaching staffs in the country have proven more adept at making key halftime adjustments, buttoning down the defense and finding the right solutions offensively to lock up victories. But what if the Buckeyes actually came out early and set the tone themselves in a Big Ten road game? That would probably be a nice little changeup, and it would certainly be effective to help silence the crowd on the road and keep a Purdue team looking for a signature victory from gaining confidence. Ohio State once again had the clear edge after intermission on Saturday against Minnesota, pitching a shutout and expanding their collective second-half scoring lead to 140-53 over opponents this season. Getting out of the gates quickly would obviously only make the Buckeyes more difficult to handle.

There was no advance warning that Sean Nuernberger wouldn’t be ready to play for Ohio State on Saturday, but Blake Haubeil was the latest player to embrace that fabled Next Man Up approach and deliver when needed. In the process, the sophomore might have staked a claim to the full-time job after hitting all three of his field goals — including a 47-yard bomb that was easily the longest converted kick of the season for the Buckeyes. If there has been any consistent area where Ohio State has been shaky over the last few years, it’s been at placekicker. But Haubeil may be poised to step in and provide some steadiness based on the way he booted the football in a Big Ten win over Minnesota. 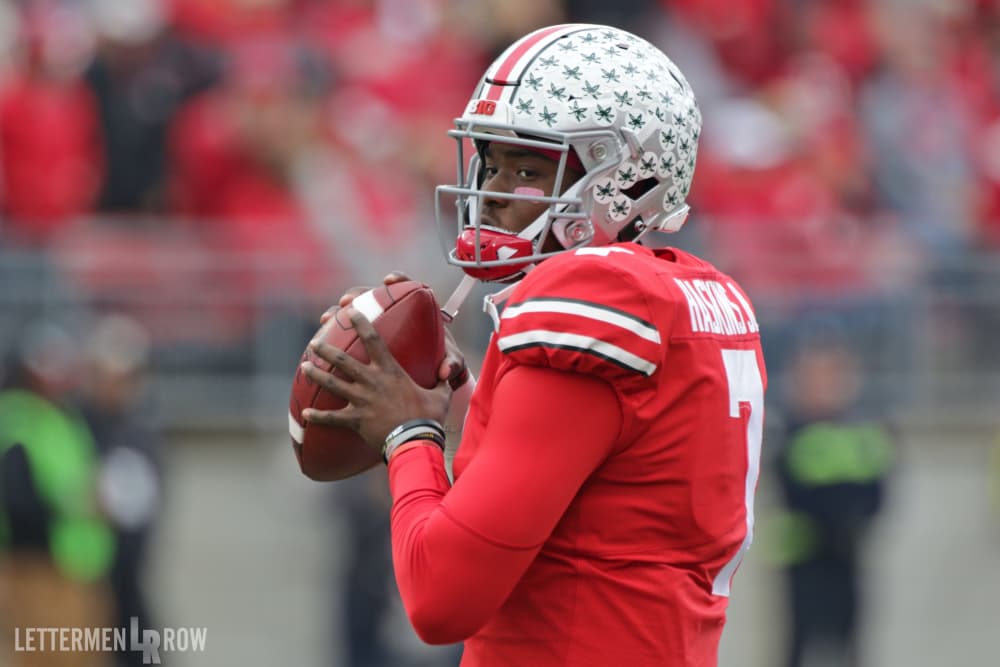 What does Dwayne Haskins have in store next?

The records keep falling, the Heisman Trophy buzz keeps growing and Dwayne Haskins just keeps impressing more with each successive performance. His latest masterpiece is stringing together consecutive 400-yard passing outings — which is even more amazing considering Ohio State only has one other such game in school history. Just when it feels like the level Haskins is playing at might be unsustainable, he kicks it up to an even higher notch and keeps on rolling for the Buckeyes. Purdue has struggled at times defensively this season, which could make for another golden opportunity for Haskins to add to his Heisman campaign.