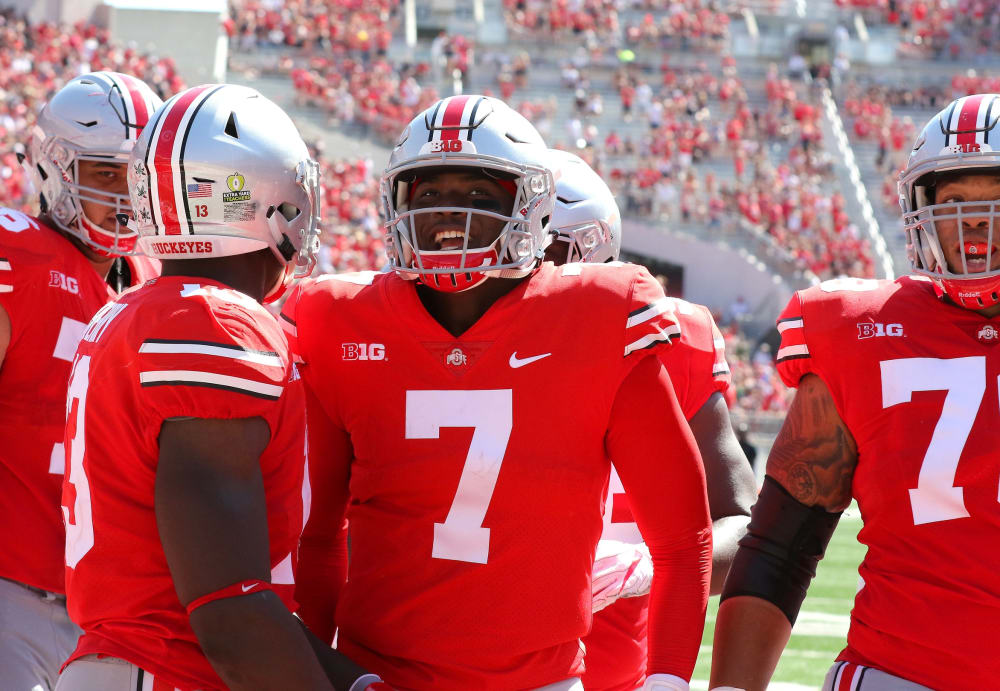 The month of secret practices during training camp are coming to an end. The investigation into Urban Meyer is already over. And all the drama of August is set to be replaced by an actual football game for the Buckeyes.

Saturday still can’t come soon enough, but at least the season-opening matchup between Ohio State and Oregon State at the Horseshoe is in sight. With that debut for the year, the Buckeyes will at last be able to provide answers to questions that have lingered throughout the offseason.

So, what issues will Lettermen Row be watching most closely this week and on Saturday afternoon? Let’s kick this off with Five Questions.

The absence of Urban Meyer isn’t exactly new to the Buckeyes at this point after spending the entire month with their coach on paid administrative leave. But it’s still surely going to be weird for everybody involved not to see him in the locker room or the sideline when the season officially begins against the Beavers. Acting coach Ryan Day will be in the spotlight, and it will be fascinating to see what kind of tone he sets for the team both in public and behind closed doors during what amounts to a three-game audition to run his own program — or eventually take over some day for Meyer.

Is Dwayne Haskins ready to air it out?

It’s probably not going to come as a surprise that Ohio State isn’t going to magically transform into some sort of Air Raid attack just because Dwayne Haskins likely brings more arm talent to the quarterback position than J.T. Barrett. The Buckeyes still have a loaded backfield, they are still going to primarily rely on a powerful rushing attack — and even with Haskins, they will still run the quarterback. But the threat of the deep ball from Haskins is what theoretically should open up the playbook for the Buckeyes, and the first start for the redshirt sophomore is going to reveal plenty about his potential running the show this season. 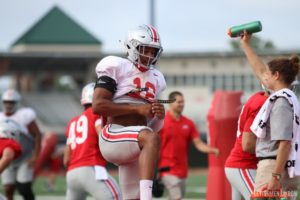 Keandre Jones is competing for a role at linebacker for Ohio State. (Birm/Lettermen Row)

Who are the new starters on defense?

Ohio State has never made it official, and even the release of a depth chart on Tuesday is likely to still leave a bit of uncertainty about who all will be stepping on the field first against Oregon State. Is Tuf Borland truly ready to return in time for the first game at middle linebacker after working with the first unit during both open practices? Is Pete Werner sliding into the other starting role on the outside opposite Malik Harrison? Are the Buckeyes ready to officially give Isaiah Pryor the top spot at safety alongside Jordan Fuller? There isn’t anything to worry about on the defensive line, of course, but how Ohio State lines up behind them will bear monitoring.

What about Tate Martell?

Given the expected level of competition, at some point the backup quarterback is going to play this week. But there has been endless speculation about how the Buckeyes will use Tate Martell either situationally or in special packages, and this will be the first glimpse at how the coaching staff decides to proceed with him. Given the lack of experience at the most important position on the roster, it makes sense to get Martell involved and build up some reps to draw from moving forward. But the Buckeyes also have to be careful managing the risk with Matthew Baldwin apparently not yet fully cleared from his offseason knee surgery, leaving plenty of intrigue at quarterback behind Haskins.

How many freshmen will play in the Ohio State opener?

Given the new rules that allow participation in up to four games without losing a redshirt season, it’s possible the Buckeyes might give a test run to every freshman on the roster. The potential pro in that decision is that Ohio State can right away find out which guys are ready and could help throughout the season. If there is a con, it might be taking away one potential opportunity at the end of the season for a guy who might not be prepared at the moment but could contribute to a stretch run by November or December. This is all new thanks to the first go around with a rule change, so it’s going to be interesting to see how the Ohio State coaching staff manages the options.

WATCH: Get set for Ohio State season kickoff with hype video
Who will score first touchdown of the season for Ohio State?
Advertisement