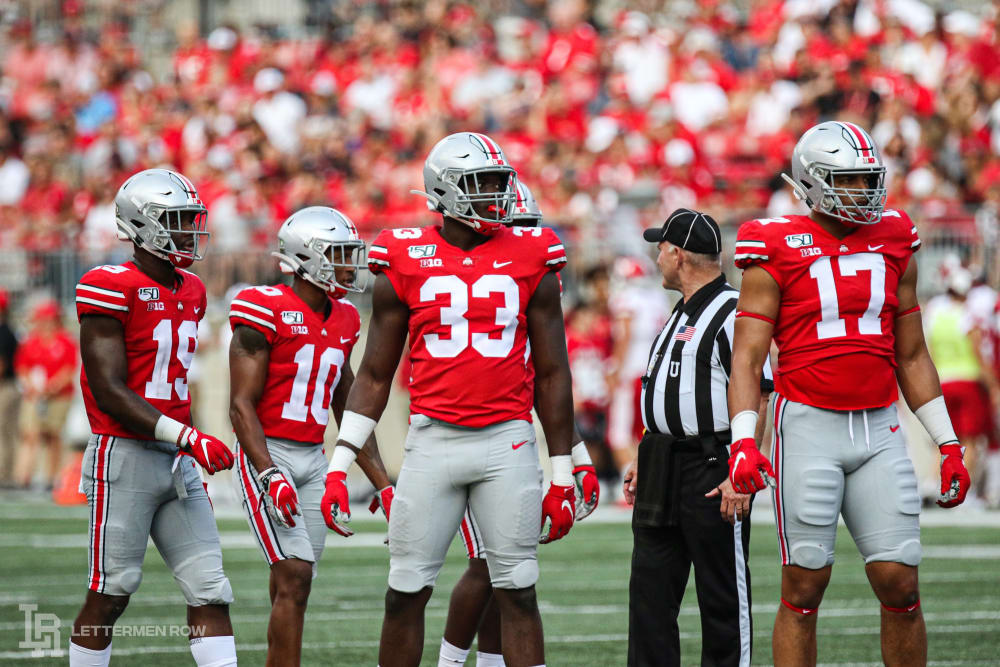 Zach Harrison and the Ohio State defense are preparing for a test from Nebraska. (Birm/Lettermen Row)

The Buckeyes have certainly still treated the first four weeks as business opportunities, and they clearly made the most of their opportunities to get better while enjoying themselves plenty during the string of blowouts that opened the season.

But Ryan Day looked at the front half of the schedule as a unique challenge for his team for a reason, because it was all building toward the next two weeks and a couple Big Ten tests before the bye week. So, after dispatching Miami (Ohio) with ease on Saturday, Day quickly flipped the page to make sure the No. 5 Buckeyes were locked in on Nebraska ahead of an intriguing road trip this week to Memorial Stadium.

How will the Buckeyes tackle it? Lettermen Row is getting set for the week ahead as it always does, asking five key questions of Ohio State with the answers potentially making the difference in keeping the winning streak rolling. 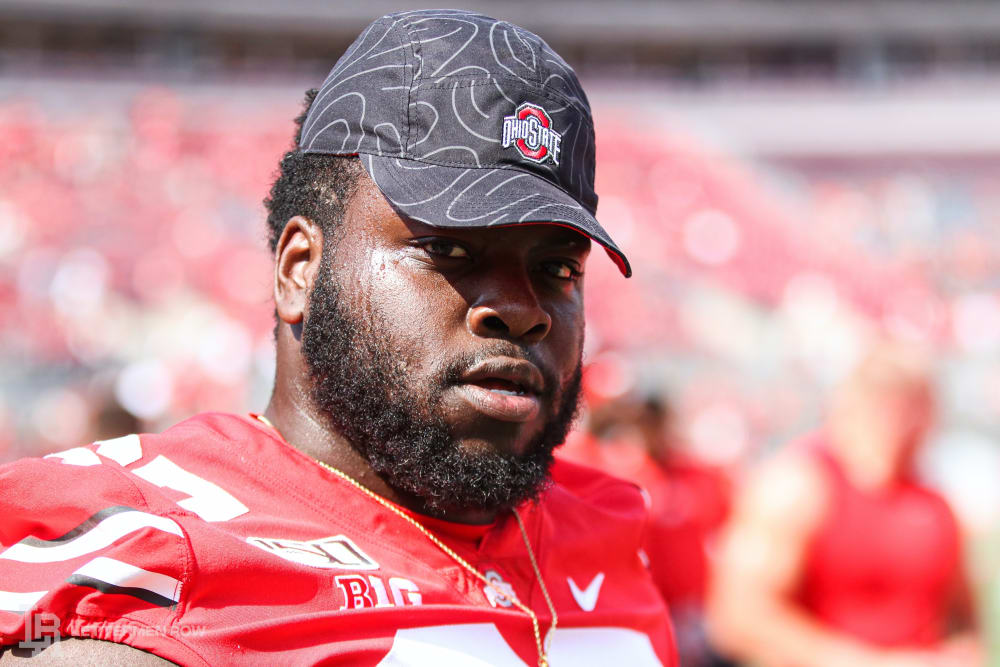 How many Buckeyes are returning this week?

Ohio State had pinpointed Week Five all along as the target date for a couple key players who left training camp with injuries, and it appears to be time for captains Jonathon Cooper and C.J. Saunders to both get back in the lineup. The return of Cooper, in particular, should be a lift for the defense and the pass rush as he settles back into the rotation opposition Chase Young on the edge. And while the offense hasn’t really missed a beat during the first month, Saunders bolsters the depth at H-back and as a slot receiver — and he might be an option on special teams. The Buckeyes also appeared to be playing it safe last week with defensive end Tyreke Smith and defensive tackle Robert Landers, so the Rushmen might finally be approaching full strength in time to battle the Huskers.

Both Damon Arnette and Jeff Okudah have got their hands on interceptions. Jordan Fuller is continuing his stellar work at safety, and Shaun Wade is becoming one of the best playmakers on the team from his do-it-all defensive back spot. Nebraska, though, is really going to be the toughest test so far for the revamped secondary, and Ohio State actually seemed to hit a couple rough patches last week with miscommunication in zone coverages creating a couple opportunities for big plays against it. The Huskers have a dynamic weapon at quarterback in Adrian Martinez, so the Buckeyes will have their hands full. 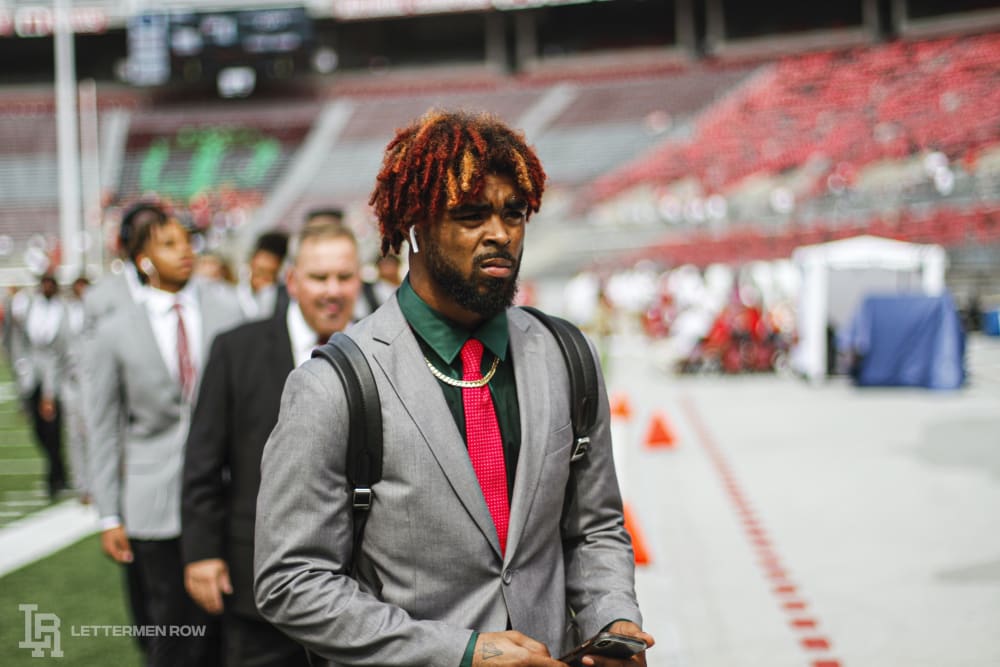 Ohio State cornerback Damon Arnette has been one of the best performers for the Buckeyes this season. (Birm/Lettermen Row)

Does Nebraska have any shot to slow down Buckeyes?

Honesty, it’s hard to envision the Huskers doing much to limit the effectiveness of a red-hot Justin Fields, a surging rushing attack and a dangerous group of wide receivers and tight ends. And while Ohio State is going to have success moving the ball against just about anybody, that probably goes double for a Nebraska squad that has been fumbling around in the darkness trying to find Blackshirts. The Huskers have already allowed 34 points to Colorado and somehow just gave up 38 to Illinois, which doesn’t exactly bode well for their chances of stopping one of the most prolific scoring attacks in the country.

One of the real mysteries over the last couple seasons is how a team with as much talent as Ohio State struggles to find a spark in the kickoff and punt return game. But an answer might have emerged in the tuneup win over Miami (Ohio), and it could be time to hand off that responsibility to freshman Garrett Wilson. Granted, the competition level doesn’t make for an exact comparison. But over five return attempts, Demario McCall has managed 51 yards — and Wilson’s first try of the year went for 52. The Buckeyes also got a glimpse at the blinding speed of Jameson Williams, so it appears he might be worth a shot at some point, potentially on kickoffs as he keeps gaining the trust of the coaches. And Saunders could also be back this week, giving Ohio State three more options to add to the potential on special teams.

Will Buckeyes get sick of ‘trap game’ questions?

Anytime Ohio State goes on the road it’s almost certainly going to get asked about the surprising upsets over the last couple years to Iowa and Purdue — and that will be even more inescapable this week since the program is taking on another West Division opponent. There is no reason whatsoever for the Buckeyes to be caught off guard by Nebraska, though, so it’s hard to imagine this could be considered a trap game for them. Ohio State played a close game with the Huskers just last year, so it knows it can’t take anything for granted. And beyond that, the Buckeyes are more aware than ever that they can’t afford a slip-up since the College Football Playoff committee appears to grade their mistakes more harshly and discount their achievements more than any other program. But it will still be interesting to hear from Ohio State about their mentality this week, what they’ve learned from the shocking losses over the last two years and how that will factor into preparations for Nebraska — because those questions are definitely coming.

Jeff Okudah gets ‘monkey off back,’ building Ohio State momentum
Who helped their cause in Buckeyes blowout win over Miami?
Advertisement
Advertisement