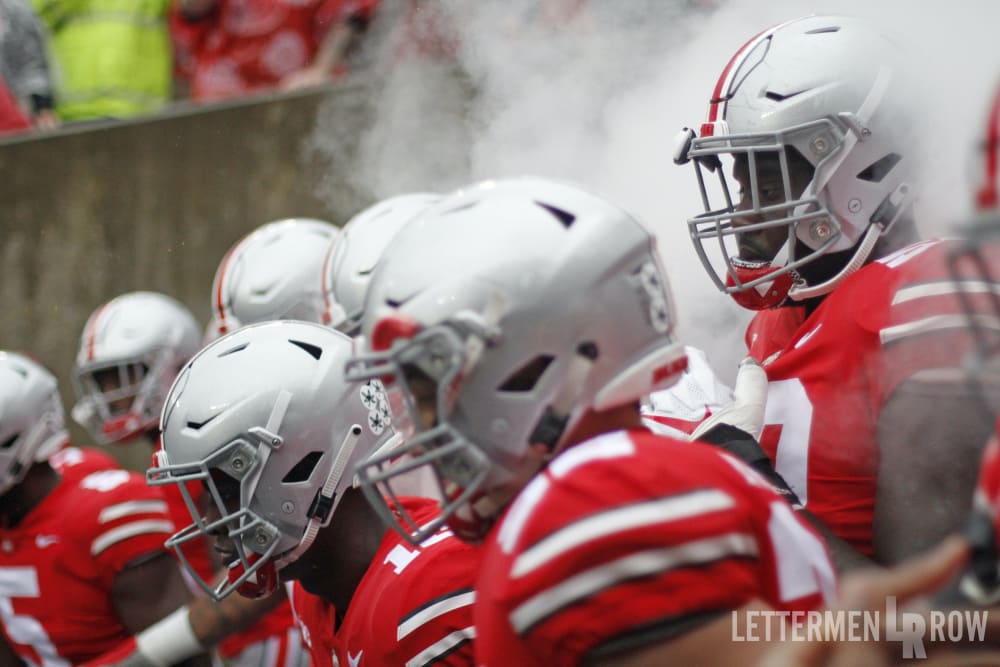 Ohio State is looking to get back in championship form heading into the final month of the regular season. (Birm/Lettermen Row)

COLUMBUS — The time to compete for championships has arrived, and Ohio State is still strongly positioned to contend for them.

Now the Buckeyes just need to again play like a team worthy of winning some hardware heading into November.

The month of October, obviously, turned out to be pretty forgettable for Ohio State and was certainly capped in ugly fashion with a blowout loss at Purdue. That stunner sent the Buckeyes into the off date reeling and looking for answers, even while everything they want to accomplish this season remains in reach with a perfect run through the end of the regular season.

If the Buckeyes are going to pull that off, they’ll have to made the most out of those extra practices last week and the days of preparation left before taking on Nebraska on Saturday at the Horseshoe. And that’s exactly where Lettermen Row’s Five Questions for the Buckeyes will start setting the table for a pivotal stretch.

Has anything changed for Ohio State?

The Buckeyes had been talking about the issues plaguing the team well before they manifested in the upset at Purdue, but they clearly hadn’t done enough to address them. With the extra time afforded by the off date, Ohio State has given a perfect opportunity to finally make some tweaks to find fixes for a stagnant rushing attack, a floundering red-zone offense and a defense that has been repeatedly gashed for explosive plays. Whether it’s schematic adjustments or personnel swaps, it should be clear by Saturday afternoon what the Buckeyes have planned to get back on track down the stretch. 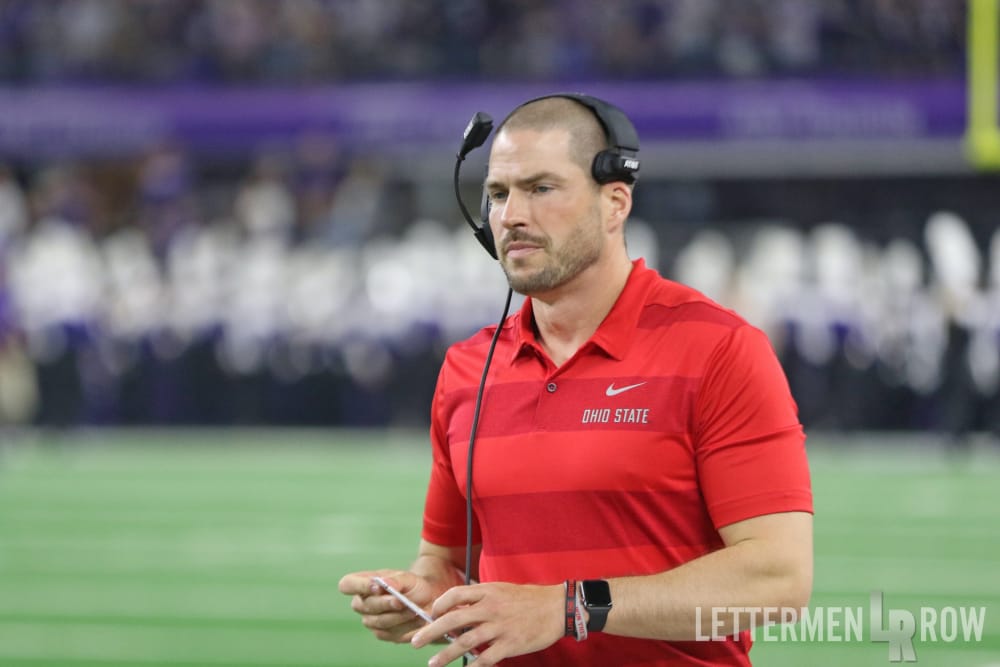 How healthy are the Buckeyes?

A handful of key contributors have been dealing with nagging injuries, and it’s possible that some of them might linger for the rest of the season. But guys like defensive tackles Robert Landers and Dre’Mont Jones, cornerback Damon Arnette and left tackle Thayer Munford surely needed a break last week to try to get closer to full strength, and that could be a significant boost starting with the matchup against Nebraska. Losing wide receiver Austin Mack to foot surgery last week obviously was a setback, and the Buckeyes surely don’t need another reminder that Nick Bosa isn’t coming back — so there’s only so healthy the roster is going to get. But the off date likely fell in a nice spot for the Buckeyes.

Can Ohio State rediscover some energy?

The team that took the field at Purdue looked to have its swagger back based on all the dancing around Ross-Ade Stadium and the good vibes they all seemed to be feeling. But that didn’t translate into an energetic performance after kickoff, and Ohio State just hasn’t seemed to look like itself in the energy department lately. Maybe the time off gave the Buckeyes a chance to recharge the batteries, or perhaps some new alternate uniforms for Saturday will provide a jolt. Either way, Ohio State could use a bit of juice to put together a four-quarter performance for the first time in a while. 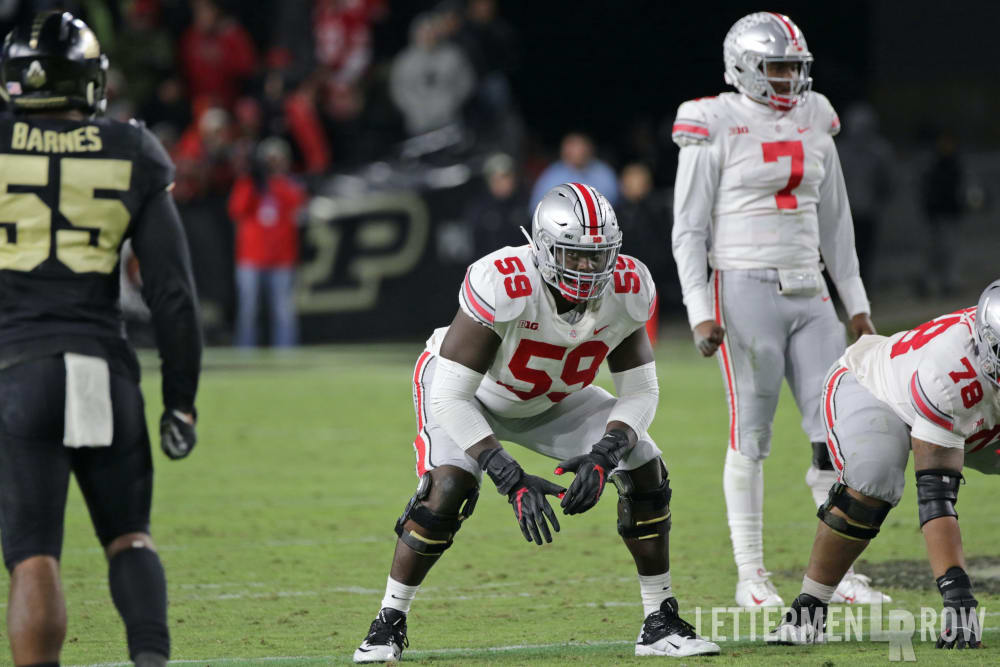 Isaiah Prince must step up for Ohio State at right tackle. (Birm/Lettermen Row)

Will the leaders step up for Buckeyes?

Now is the time of the season where Ohio State needs its captains the most. The Buckeyes are facing adversity coming off a loss, there is no margin for error in the Big Ten race and there are clearly issues that have to be addressed with hard work and commitment. Last year it was center Billy Price setting the tone and the expectations moving forward after a loss, and he handled that role incredibly well both in public and private for the programs. Immediately after the Purdue loss, Isaiah Prince was apparently the guy trying to take up that role — now he needs to deliver both better performances on the field and with his voice off it.

Does Ohio State have solutions in the red zone?

There isn’t exactly a shortage of suggestions for the Buckeyes when it comes to finding a way to fix the breakdowns in the red zone. From using Tate Martell as a dual-threat weapon to having Dwayne Haskins go under center to take snaps or putting J.K. Dobbins and Mike Weber in the backfield together, Ohio State could do any number of things to get more creative in the red zone. Honestly, the Buckeyes would probably be better off if they just kept it simple and got back some of their smash-mouth mentality with the tailbacks and improved blocking from the offensive linemen coming out of the off date. On Saturday, Urban Meyer will get a chance to unveil what he thinks is the best path forward.