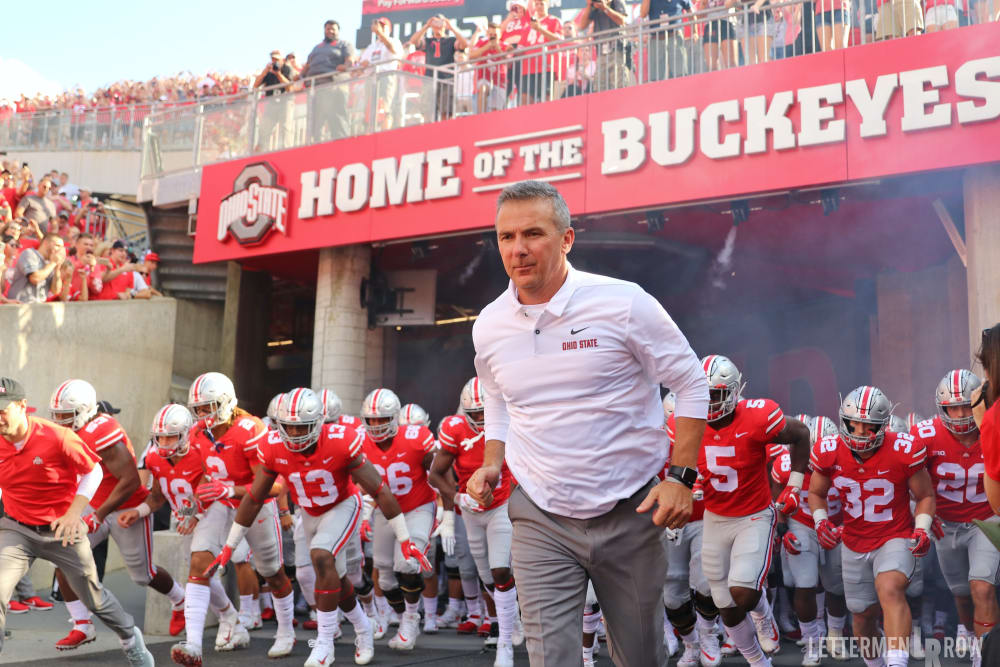 Urban Meyer and the Ohio State Buckeyes are back at home on Saturday against Minnesota. (Birm/Lettermen Row)

COLUMBUS — Somehow the first half of the regular season is already complete at Ohio State.

Time is flying as the Buckeyes are rolling. And if the opening portion of the schedule has revealed anything, it’s that Ohio State is both a legitimate national-title contender — and still a team with room to improve.

Taken together, that’s kind of a scary thought after the program was essentially sleepwalking on Saturday against Indiana and still wound up coasting to a 23-point victory over a division opponent. It can also be viewed as at least some reason for concern, since some of those weaknesses the Buckeyes have shown aren’t exactly new but remain unsolved despite the incredible amount of talent they have to work with this season.

But there are obviously still far more positives than negatives for an unbeaten team in control of the Big Ten race heading into the second half of the season. That kicks off on Saturday at noon against Minnesota, and Lettermen Row is getting ready for the week ahead as it always does with Five Questions for Ohio State.

What is the solution in the Ohio State secondary?

Indiana certainly deserves some credit for the plays it made in the Horseshoe. The Hoosiers came prepared with a solid scheme, they were able to find ways to slow down the Ohio State pass rush and quarterback Peyton Ramsey and his receivers combined to make some impressive plays. But the fact that another team was both so willing and able to connect through the air against the Buckeyes is clearly starting to irritate Urban Meyer, and there’s good reason for that. At some point, Ohio State is going to have to make adjustments to slow down the onslaught of explosive plays and costly penalties in the secondary. Does that mean swapping out personnel, changing up the schemes or maybe a combination of both? The Buckeyes are paying defensive coordinator Greg Schiano more than a million bucks to figure it out. 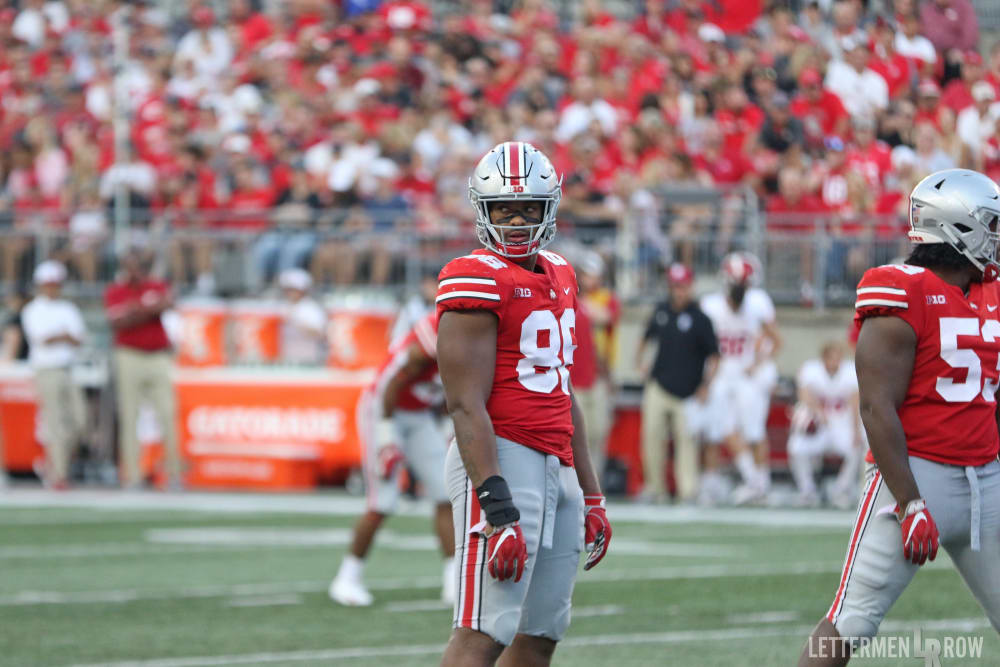 Dre’Mont Jones has been slowed by an ankle injury, but he’s still having a major impact for the Ohio State Buckeyes. (Birm/Lettermen Row)

How healthy are the Buckeyes?

There was no immediate update on the two starters who were carted to the locker room in the second half on Saturday, but the injuries seem to be starting to pile up for the Silver Bullets. There’s no doubt that health concerns are adding to the degree of difficulty for the defense, and the Buckeyes will really be scrambling if linebacker Malik Harrison and defensive end Jonathon Cooper are out for any extended period of time. Obviously Nick Bosa isn’t going to be back until at least November, and Dre’Mont Jones and Robert Landers are both dealing with nagging issues, which is stretching Ohio State pretty thin up front at the midway point of the season. The first order of business this week will be figuring out the status of a beat-up defense.

What is holding back the rushing attack?

Truthfully, it might not really be that big of a deal that Ohio State is uncharacteristically struggling to run the football even with two of the Big Ten’s best tailbacks. If Dwayne Haskins is going to throw for 455 yards and six touchdowns, it doesn’t make much difference that the offense is only averaging 3.2 yards per carry on the ground. Of course, for a coach like Urban Meyer who wants his attack to be balanced, he’s not going to accept what he saw on Saturday — especially given more problems converting in short-yardage situations. Since the Buckeyes are opposed to going under center for quarterback sneaks, it might be time for more creative approaches to the play calling. And the way Mike Weber is playing, Ohio State may also need to reconsider the distribution of carries. 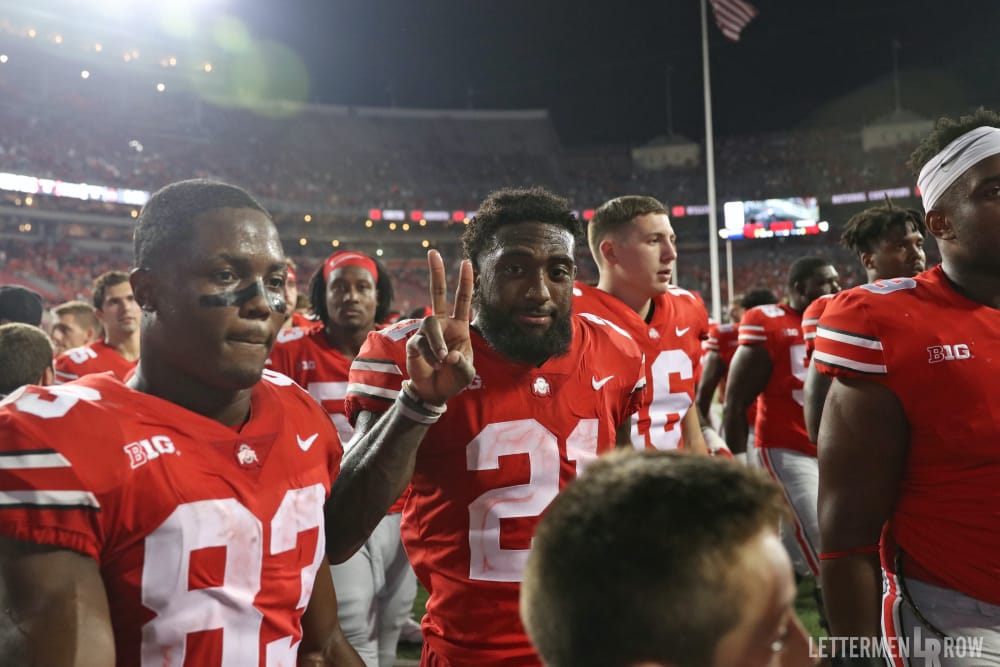 Is it time to start counting Parris Campbell touches?

The Buckeyes are deep enough at the skill positions now where it’s probably not necessary to go back to the time where it was imperative to get game-breakers like Curtis Samuel to a certain threshold of touches every week for the offense to thrive. But the freaky speed of Parris Campbell and his improved reliability as a receiver is starting to make it seem like he must be included as a featured part of the game plan every week. There are surely few things more terrifying to a defense than seeing Campbell fly across the field on a drag route or blockers getting set up in front of him on a screen, and his 9 catches for 142 yards and a pair of touchdowns against Indiana offered more examples of how dangerous he’s become. The Buckeyes aren’t going to forget about him, of course. But they might be able to even add to his workload moving forward.

Just kidding, the answer is obviously no at this point. But the conversation is definitely not going away any time soon with Dwayne Haskins on pace to absolutely shatter some important school records for quarterbacks. At the top of the list is the single-season mark for touchdowns, since he’s already got 25 at the midway point of the regular season — just 10 shy of J.T. Barrett’s all-time mark with at least seven games ahead of Haskins (and potentially two more on top of that). It’s not news at this point that Haskins has exceeded virtually every reasonable expectation of him so far as the starter. But he is still finding new ways to impress with each passing week.