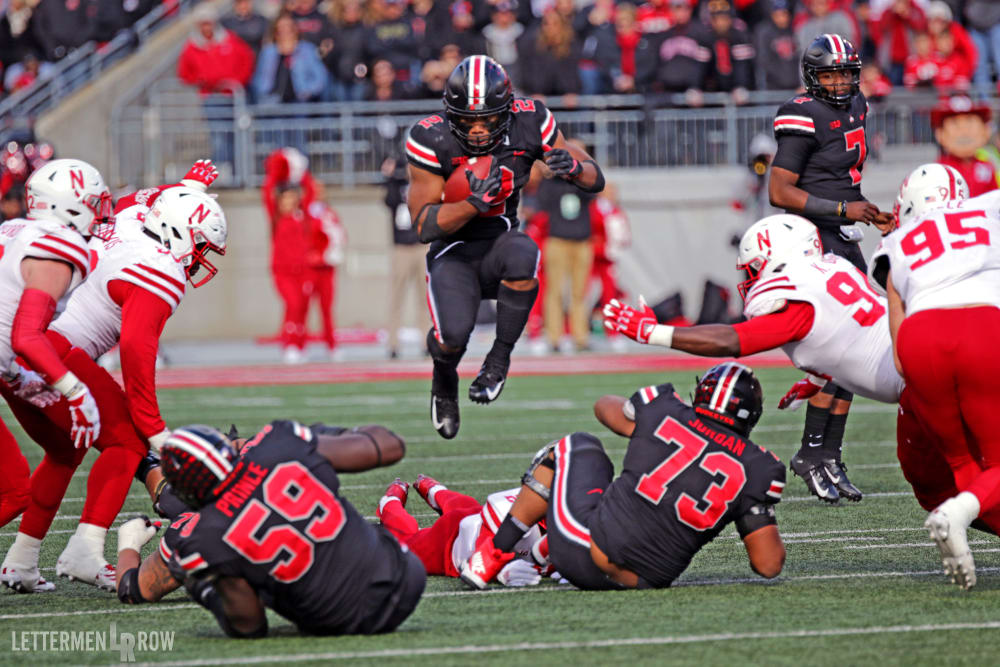 Ohio State running back J.K. Dobbins believes the ground game for the Buckeyes is on track again. (Birm/Lettermen Row)

COLUMBUS — Stage One of the November run to a championship is complete for Ohio State.

The next step isn’t the most challenging of the month, but it’s clearly the runner-up and packed with no shortage of challenges for the Buckeyes.

Michigan State has certainly given Urban Meyer his share of tests during his seven-year tenure with the program. And while he’s had success on the road against the Spartans, it rarely comes easily for the Buckeyes in that hostile environment against a savvy coach and occasionally in some terrible weather.

Ohio State is almost certainly going to need to be at its best against Mark Dantonio and Michigan State on Saturday at noon, and that kind of effort has been surprisingly elusive during the second half of the season — even after an off date and with the chance to refocus following the blowout loss at Purdue.

The Buckeyes bounced back with a win to start the final month of the regular season on Saturday against Nebraska. But now it’s time to turn the page to the next leg of the journey, and Lettermen Row is starting it in customary fashion with Five Questions for Ohio State.

Has the running game really turned the corner?

The Buckeyes pounded in some touchdowns on the ground, put up impressive numbers and left the Horseshoe feeling like the rushing attack was back on track. But there’s a big difference between the Buckeyes moving the football against Nebraska and going on the road and imposing their will against Michigan State defense that allows the fewest rushing yards per game in the Big Ten. Ohio State absolutely deserves credit for trying out a couple new schemes and scaling back on the run-pass options to regain traction for tailbacks J.K. Dobbins and Mike Weber. But now it has to validate that progress in a much tougher environment. 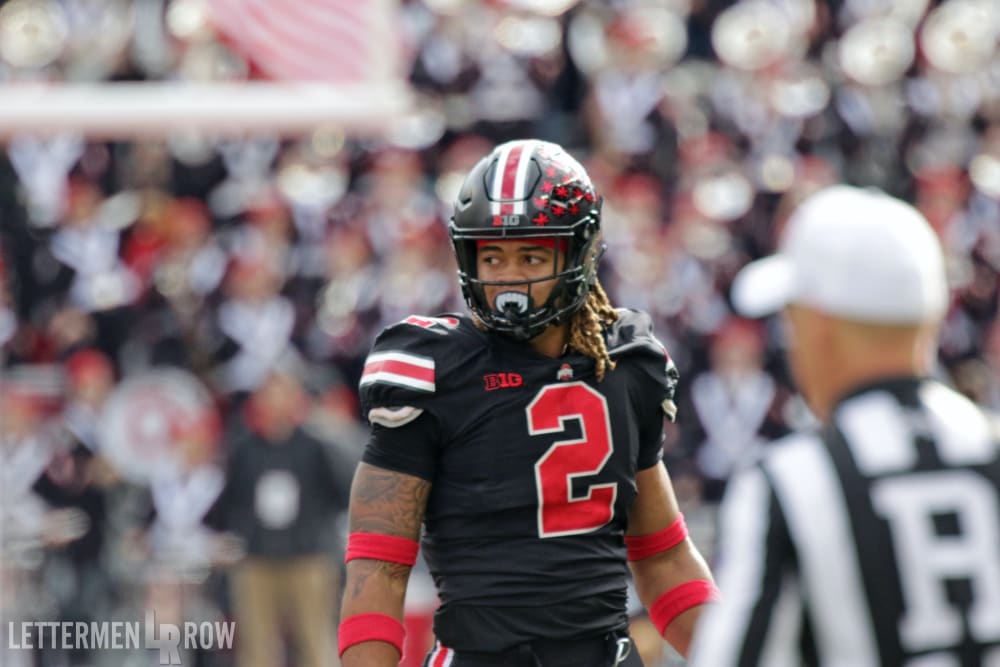 Does Ohio State have swagger back?

The margin of victory might have looked a lot different without those three turnovers against Nebraska in a matchup that really shouldn’t have been that close. That’s not an excuse as much as a possible justification for why Ohio State appeared to be looking much more confident than it had in weeks, particularly when it was jawing with the Huskers as it locked up the victory. The Buckeyes have to be careful at times to keep their emotions in check considering how much they’ve struggled with careless penalties this season. But clearly getting fired up once again and talking a little trash might be a sign that Ohio State is fully invested in getting everything rolling and winning championships.

Are the leaders making a mark for Buckeyes?

The most visible sign of a captain imploring Ohio State to do more actually came with Jordan Fuller heading to the locker room following his questionable targeting ejection. That’s not ideal since the junior safety couldn’t influence the game anymore, but seeing him imploring the crowd to get loud with his helmet off was yet another positive sign that the veterans know a bit of extra effort is required right now with these Buckeyes. Fellow captain Tuf Borland delivered one of his stronger performances of the season, right tackle Isaiah Prince helped establish an aggressive mindset for the ground game and Ohio State once again got great effort from its trio of captains at wide receiver. That leadership will be even more crucial on the road against Michigan State.

Will Brendon White get a full-time role at safety?

At this point, the Buckeyes should have a reasonably good idea what Isaiah Pryor can give them when he’s completely healthy again, and they seem to have made up their minds on Jahsen Wint. There isn’t any denying the upside with Shaun Wade, and he continues to make a couple flashy plays as Ohio State tries him at safety. But nobody has really even come close to making the kind of impact off the bench that Brendon White did against Nebraska, and his 13 tackles — including two for loss — left it fair to wonder why he’d been stuck there for so long. Either way, now Ohio State needs to figure out the next step when it gets Jordan Fuller back from his targeting ejection, because it looks like he might have a new sidekick in White. 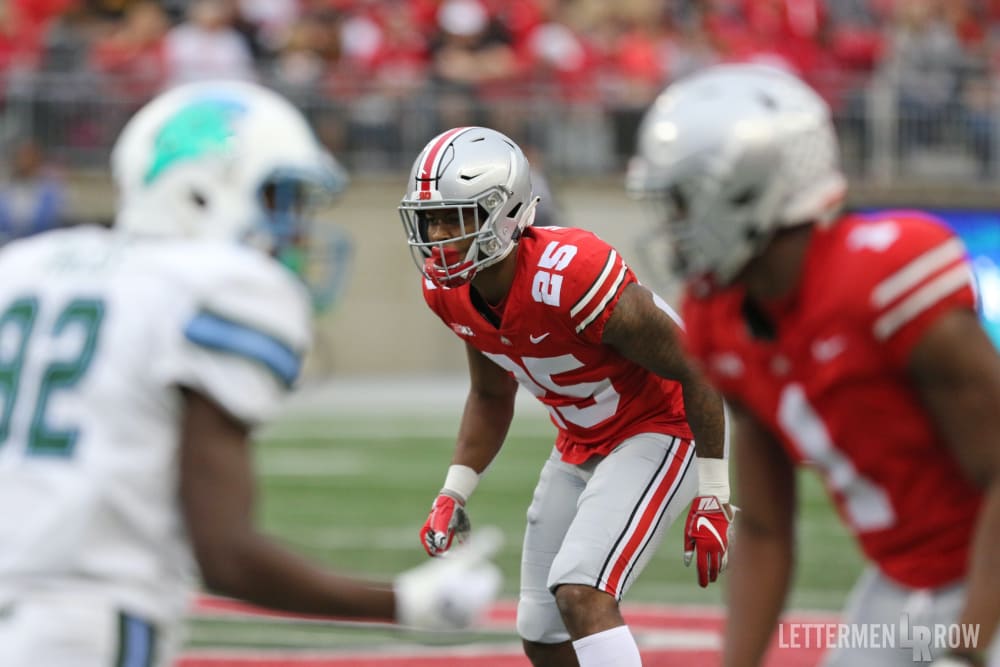 Seriously, can Ohio State ever get healthy?

Injuries happen to every team in college football, and Urban Meyer has repeatedly stressed that he won’t be using them as an excuse for an Ohio State roster that is loaded with more elite recruits than just about any program in the country. But the Buckeyes still are losing starters at an alarming amount, and against Nebraska it was the secondary that was scrambling with Pryor and Okudah missing without much public warning. The off date was supposed to help Ohio State get healthy for the stretch run, and Meyer suggested after the game that everybody should be back in time for the visit to Michigan State — not including Nick Bosa, of course. A matchup like the one on the road against the Spartans calls for all hands on deck, so that bears watching in the week of practice ahead for the Buckeyes.