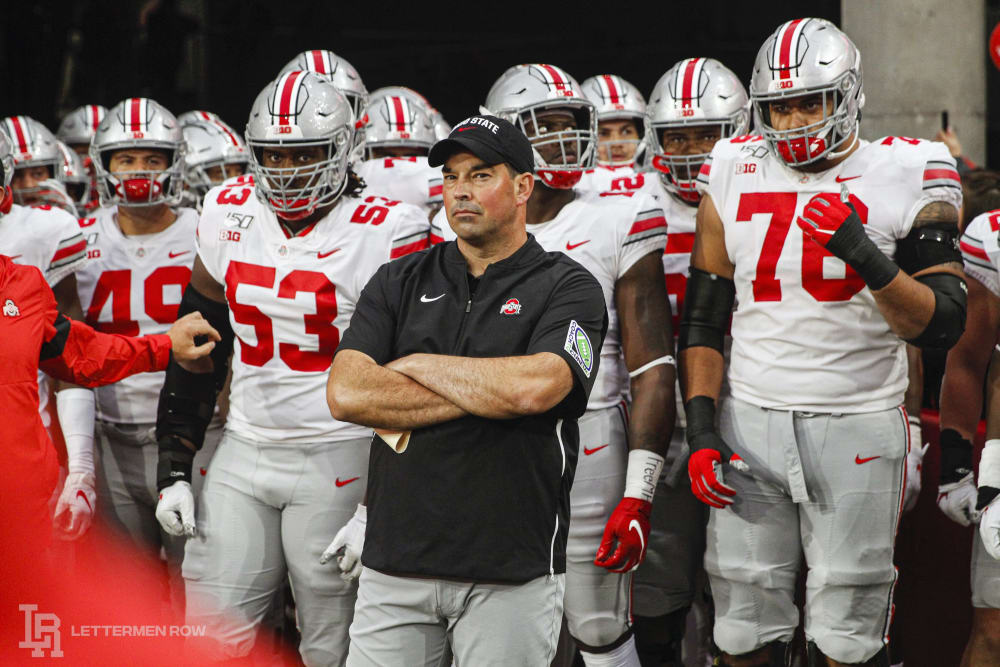 Ohio State coach Ryan Day has the Buckeyes rolling after picking up win No. 5 at Nebraska. (Birm/Lettermen Row)

Can there really be any left at this point? Every week is bringing an outing more impressive than the last for the Buckeyes, and it’s hard heading into the midway point of the regular season to find any flaws at all with the two-time defending champs in the Big Ten.

It’s true that the poll voters haven’t really caught up yet with the dominance. Perhaps there’s also some holdouts because of the lingering memories of Ohio State tripping up during the last two seasons or because the schedule isn’t perceived to have been that difficult over the first month of the season. It’s possible there still could be some skeptics left over clinging to the notion that a first-year coach, first-time starter at quarterback and a rebuilt defense would be too much for Ohio State to overcome — a preseason discussion that seems almost laughable after the 48-7 destruction of Nebraska on Saturday night.

“I still feel like people don’t think it’s real yet,” Fuller said. “I mean, maybe not. Maybe our fan base doesn’t think that. Maybe you guys [who cover the team] don’t feel that way. But I know there are people that don’t believe the hype yet.

“I think the hype is real. But we’ve got a long way to go, though.”

It’s hard to argue with the Buckeyes when there is virtually unanimous agreement from the coaching staff all the way down through the roster pointing to improvements that can still be made. But the version already on display is pretty dangerous already, and now there’s another week to make corrections before Ohio State takes on Michigan State in an East Division battle in the Big Ten.

As always, Lettermen Row is getting set for the next matchup with Five Questions for the Buckeyes. 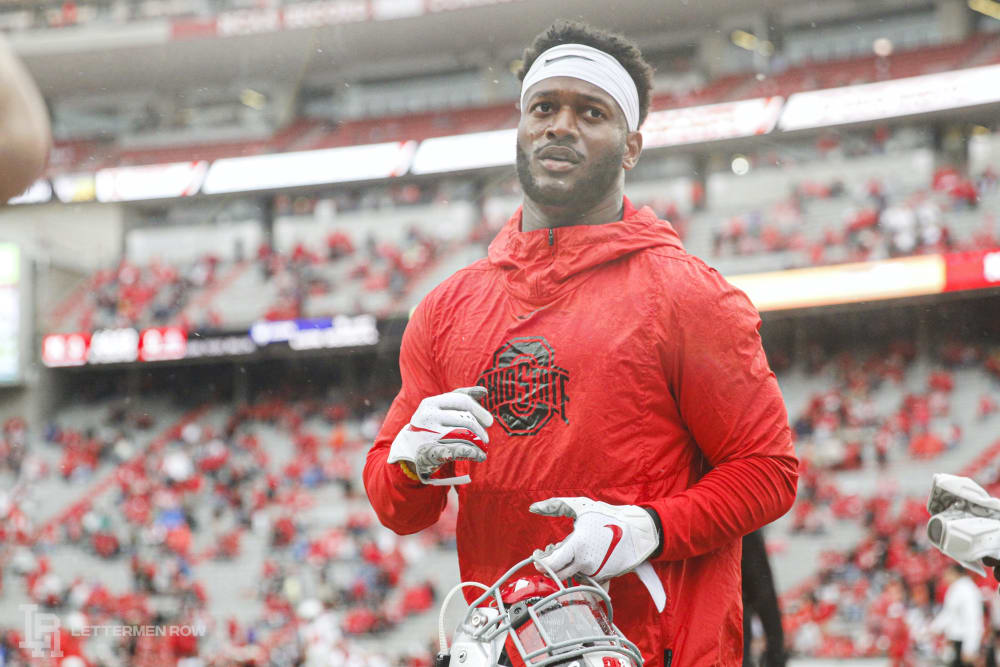 How long can Buckeyes keep that shoulder chip?

Ryan Day is getting a gift from voters, and in the short term the fact that the rankings keep favoring the SEC teams and Clemson is going to keep fueling guys like Fuller — a captain who is well aware of the situation for the Buckeyes right now. Do those polls actually matter at all? No, not to a team that looks like the class of a competitive conference and will be favored in every game for the rest of the regular season. If Ohio State handles its business, it’s obviously going to be in the College Football Playoff. But it will be interesting to see if the Buckeyes can keep playing with the edge, attitude and mindset to prove the doubters wrong all season when the praise does start coming more steadily. It’s always easier to find motivation as an underdog, and the Buckeyes rarely get chances to act like one. But the polls are serving as that sort of fuel right now.

When will Tyreke Smith return for Ohio State?

The odds look long for the Rushmen to ever get completely healthy with the shoulder injury for Taron Vincent trending toward a season-ender. But the Buckeyes did get a big boost from the returns of Jonathon Cooper and Robert Landers last week, and the next guy in line to get back in the mix is rising star Tyreke Smith. Since leaving the win over Indiana early with what appears to be an upper-body issue, Smith has been ruled out of the last two games and wasn’t able to contribute to the tackle-for-loss party at Nebraska. The Michigan State offense isn’t likely to pose much of a challenge for the Buckeyes and a bye date looms after that, so it will be interesting to see how the Buckeyes proceed from here and how serious that issue might actually be for Smith. 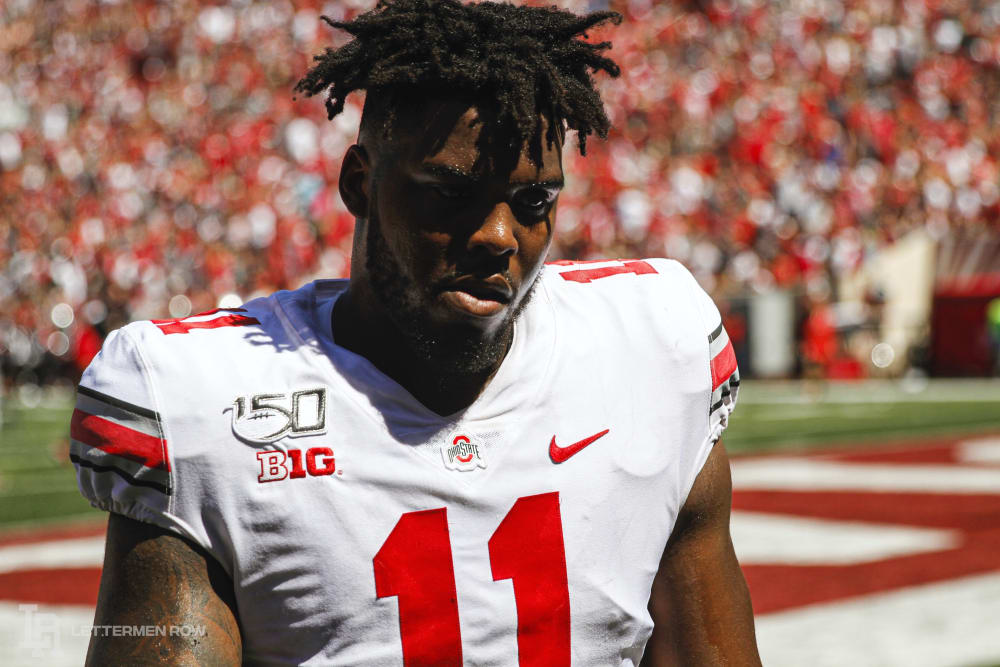 Ohio State defensive end Tyreke Smith hasn’t been able to shake the injury but this year so far. (Birm/Lettermen Row)

Starters at Ohio State don’t typically lose their jobs due to injury, and there was absolutely nothing wrong with the first few games for Branden Bowen that had raised any concerns up front when he was racking up Champion grades. So, after missing the Nebraska matchup with what sources described to Lettermen Row as a back injury, Bowen would figure to get his spot back as soon as he is fully cleared — and he was close on Saturday based on the fact that he was a game-time decision. But Joshua Alabi was just named the Offensive Player of the Game in Bowen’s place, and he did some jaw-dropping stuff as a blocker on the right side. This is the second time over the last six games that Alabi has stepped in and done a solid job for the Buckeyes after holding his own in the Rose Bowl, and he has to at least be in the conversation for more playing time. If nothing else, Ohio State appears to be in great shape with Alabi as the first guy off the bench.

Are tight ends due for turn as targets for Ohio State?

Luke Farrell finally snapped a personal drought with his first catch of the season, and now all four Ohio State tight ends at least have one reception to their credit. It can’t be emphasized enough that the Buckeyes are thrilled with the production they’re getting from those guys as blockers, and the coaching staff also still has a lot of confidence that it can use Farrell, Jeremy Ruckert, Rashod Berry or even Jake Hausmann as weapons in the passing attack. There are a number of factors contributing to the lack of targets for them, and one of them simply comes down to matchups. Last year against Michigan State, both Berry and Farrell had key opportunities to make plays — so this might be a week where the opportunities return for that unit.

Under the previous regime, Urban Meyer was always cautious about giving a public endorsement for his players in the Heisman Trophy race, often falling back on the fact that he hadn’t been able to evaluate the other candidates around the country. It will be interesting to see how the former Ohio State coach evaluates the field this year now that he’s in the media and not on the sideline. But beyond that, Day and the Buckeyes could be juggling multiple pushes for the stiff-arming statue with Justin Fields on a record-setting pace at quarterback, J.K. Dobbins playing like one of the best tailbacks in the country — and Chase Young making a rock-solid case that he’s the best overall player in America. Ohio State rather famously threw its weight behind a player from a position that is usually overlooked in the Heisman voting when it helped boost the signal for Orlando Pace and his pancakes. Would it do the same to help Young try to make history as a defensive player? Granted, that’s not the most pressing issue for the Buckeyes with the Spartans coming to town, but it’s the kind of topic that will come up if the program keeps rolling along like it is now.

Ohio State opens as heavy home favorite against Michigan State
Which Buckeyes helped their cause in blowout win at Nebraska?
Advertisement