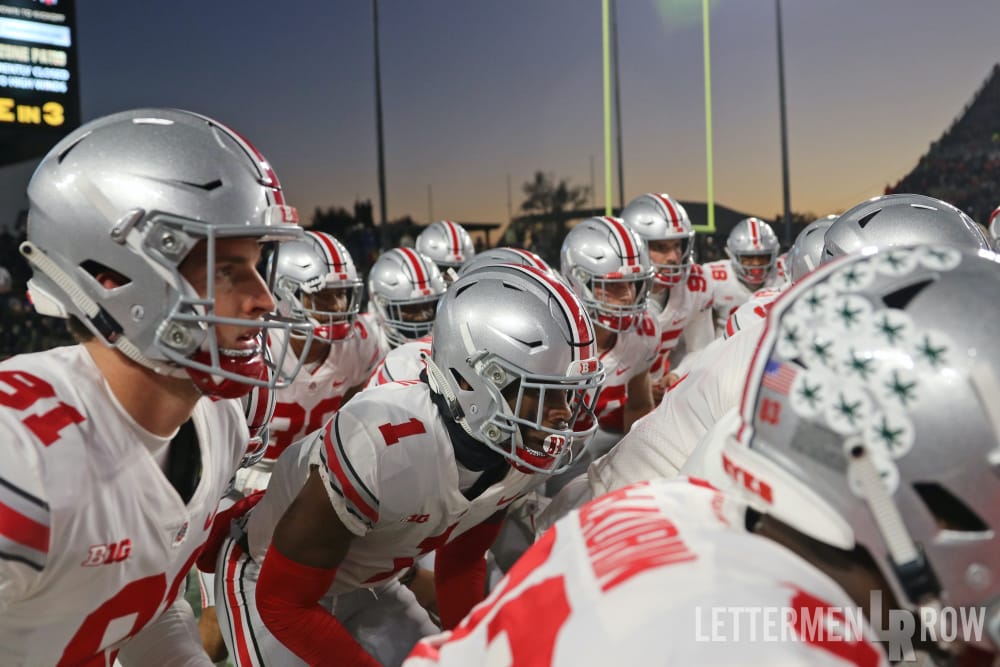 Ohio State is looking to regroup after a shocking upset at Purdue. (Birm/Lettermen Row)

COLUMBUS — The pain will certainly still be raw for Ohio State as it gets back to work, but maybe that’s a good thing.

The Buckeyes have channeled frustration into positive results many times before, and they’ve also used a shocking upset on the road against a Big Ten West Division opponent as fuel to make a run to a conference championship.

So, as shocking as the final score might have been on Saturday night at Purdue and as stunned as Ohio State might still be early in the week, there is still a lot of football left. All the goals are still on the table for the program — except for going undefeated, obviously.

The off week may have come at an opportune time as the Buckeyes get a chance to refresh both physically and emotionally, plus there’s the benefit of being able to take a long, hard look at what went wrong and address their issues heading into November.

Where to begin? Even with no game this week, Lettermen Row is kicking things off with Five Questions for the Buckeyes just like normal.

Does Ohio State have championship leadership?

The turning point for the Buckeyes coming off last year’s baffling upset loss at Iowa came immediately afterward with captain Billy Price standing up in front of the team and setting the standard for what was going to happen for the rest of the season. And his words both resonated and proved prophetic as Ohio State refocused and wound up winning the Big Ten to claim the kind of really big rings the program loves to wear. Isaiah Prince apparently took up that role on Saturday night at Purdue, but the week ahead will be critical for a group of captains that has seemingly not yet really embraced everything that is required both inside and outside the locker room to blaze the trail for the Buckeyes. Guys like Terry McLaurin and Jordan Fuller deserve credit for facing the tough questions in public, but at this point there just hasn’t seem to have been the same fiery spark from the leaders across the board that Price provided. 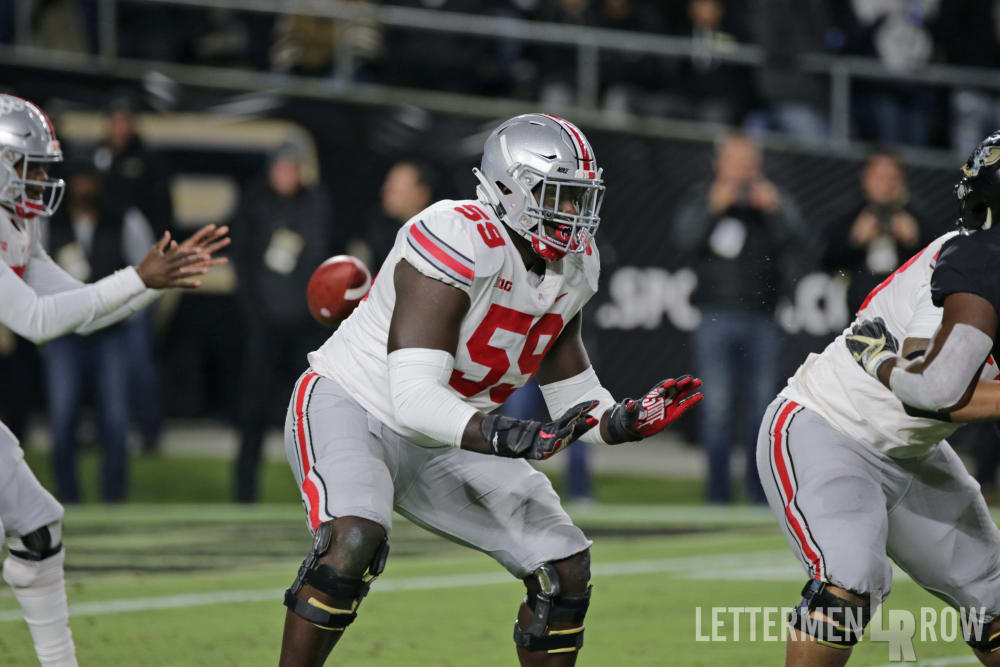 Isaiah Prince is trying to become a leader that can rally the Ohio State Buckeyes. (Birm/Lettermen Row)

Do Buckeyes have a championship coaching staff?

This might seem like a silly question for a program with Urban Meyer leading the way with three national-championship trophies on his resumé. But it’s fair at this point to at least ask some questions about the makeup of his coaching staff given some of the repeated issues that have gone uncorrected, most notably for a group of linebackers that have had breakdowns dating back to last year’s losses and with an offensive line that has seemingly lost the ability to run block. The Buckeyes appear to miss cornerbacks coach Kerry Coombs even more than anticipated, and the first season working with safeties for new hire Alex Grinch surely hasn’t met the standard for that position through eight games. Now that there is some adversity and changes that clearly need to be made, this is the time for that staff to show that it’s up to the challenge as well.

It was understandable why the Buckeyes might not have been overly concerned with running the football when the passing attack had developed into one of the most potent in America and was racking up yardage with ease. But the one place Ohio State hasn’t proven to be effective through the air is in short-yardage and red-zone situations, the kind of plays that typically rely on toughness and a powerful ground game. Meyer’s teams have consistently been among the best in the country in that area, so it’s been puzzling to watch talented tailbacks like J.K. Dobbins and Mike Weber struggle to do anything behind a group of blockers that all have the physical tools to get the job done. The expectation is that Ohio State will devote plenty of time to addressing the problems with two full weeks of practice.

How can Silver Bullets get back on track?

Excluding the disastrous fourth quarter, Ohio State largely did enough defensively to hold Purdue in check and give the offense a chance to escape Ross-Ade Stadium with another win. But without getting any scoring help to dampening any of the confidence of the Boilermakers, eventually the dam broke and some familiar problems emerged once again. Ohio State is not getting enough consistency from the pass rush, the linebackers often appear to be out of position and the secondary is still not showing the kind of ability needed to play press-man coverage on every snap. How many of the problems are due to scheme and how many are based on personnel? The Buckeyes need to make a serious evaluation of both if they’re going to get rolling in November. 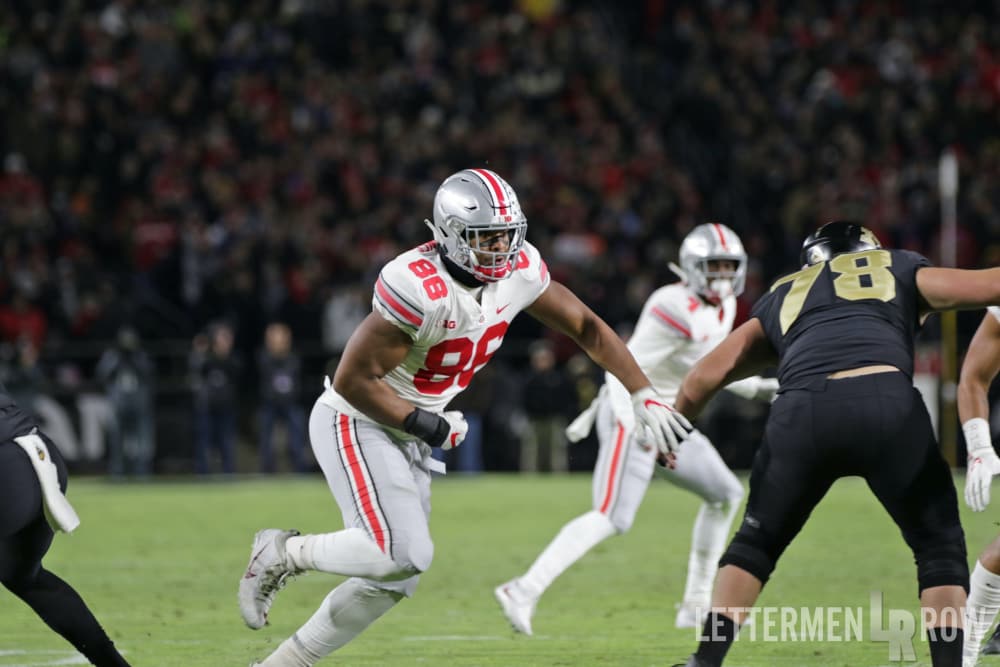 Dre’Mont Jones has been dealing with a nagging injury for the Ohio State Buckeyes. (Birm/Lettermen Row)

Will Ohio State get healthy enough to make a run?

The off date originally seemed like a target for when Nick Bosa might be nearing a return at defensive end, but that huge boost is now officially lost for good with the superstar having withdrawn from school to prepare for the NFL draft. But Ohio State still has a handful of guys that could use a week without a game to get healthy for the closing stretch of games, including key contributors like defensive tackles Dre’Mont Jones and Robert Landers, cornerback Damon Arnette and left tackle Thayer Munford. There’s also some uncertainty about the status of wide receiver Austin Mack after he left the stadium on Saturday night on crutches with an apparent foot injury. The Buckeyes will have to balance some of the work to correct problems with the need to get guys healthy.