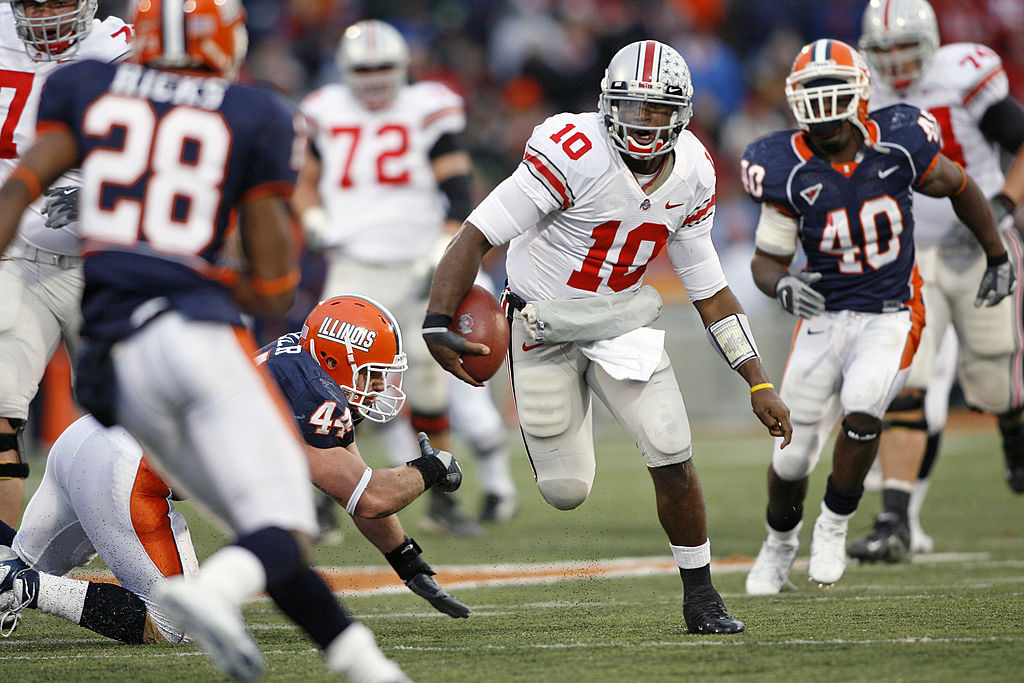 The summer offseason is in full swing, and Lettermen Row is trying to survive it with our annual Position Week breakdowns. By the time all nine units at Ohio State have been covered, training camp and media days will nearly have arrived — and the return of football in the Horseshoe will be just around the corner. Let’s kick it all off with the Buckeyes quarterbacks.

With eight national championships in program history, it’s not surprising the Buckeyes have had their fair share of talented gunslingers. They have seen 23 former quarterbacks selected in the NFL Draft since its inception in 1936.

But the hardest question when talking Ohio State quarterbacks is picking the best one. Is Terrelle Pryor better than Troy Smith? Was Joe Germaine or Bobby Hoying the better quarterback of the John Cooper Era? And even most recently, it’s hard to deny the all-around talent Justin Fields possessed.

So, what criteria to use? First, victories have to be factored into the equation. The Ohio State brand is established across the country because of the winning tradition. Ryan Day and his staff are reeling in top-rated recruits from Texas because prospects know they’ll compete for national championships with the Buckeyes.

Second, big-game performances. The reason why certain players become legendary with the Buckeyes isn’t because of wins against Indiana or Minnesota. It’s about beating Michigan, winning Big Ten titles and competing for national championships.

Talent and leadership play factors, too. A quarterback’s raw talent or ability to lead an offense isn’t the main factor, but they shouldn’t be ignored. Obviously, all post-Ohio State accolades and achievement don’t factor in.

So in honor of Quarterbacks Week at Lettermen Row, here are the five best quarterbacks in Ohio State history. 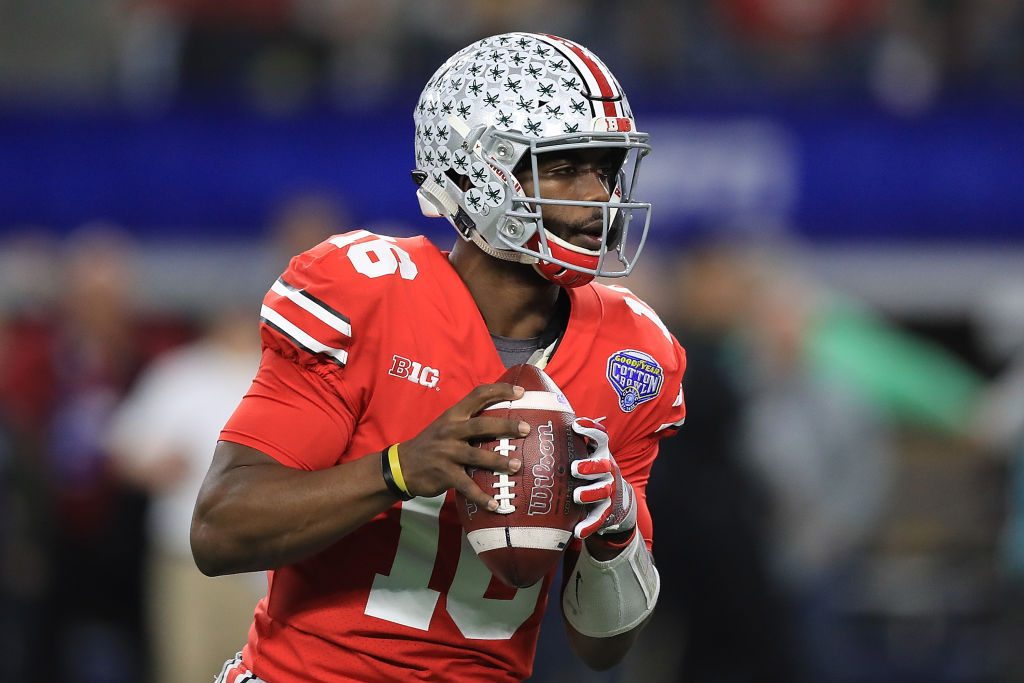 J.T. Barrett has the most wins in Ohio State history. (Ronald Martinez/Getty Images)

The winningest quarterback in Ohio State history is a no-brainer. J.T. Barrett always was at his best under pressure; Penn State at Ohio Stadium in 2017 is the best example of his talents. Down 15 points entering the fourth quarter, the two-time captain was 13-for-13 with three touchdowns in the fourth quarter. Barrett never won a Heisman Trophy, and he missed the Buckeyes 2014 national championship run with a broken ankle injured against Michigan. But he did go undefeated against the Wolverines and was a three-time winner of the Griese–Brees Quarterback of the Year award. His dual-threat abilities helped him win Big Ten Freshman of the Year in 2014 as he compiled 3,772 yards of total offense. By 2017 when he was working with Ryan Day, Barrett was showing off his arm strength in a revamped Ohio State offense. After a disappointing loss to Oklahoma early in his redshirt senior season, he rallied back to lead the Buckeyes to a Big Ten title and Cotton Bowl crown.

Troy Smith never won a national championship, probably his biggest knock. The only Ohio State Heisman Trophy winner in the 2000s, he won the award in 2006 after leading the Buckyes to an undefeated regular season and throwing for 2,542 yards and 30 touchdowns. Smith had the opportunity to go a perfect 13-0, but Ohio State fell in the BCS National Championship Game to Florida, 41-14. He finished just 4-of-14 passing for 35 yards along with an interception and a fumble in the game. But for the disappointment to cap his career, there are more positives that outweighs the cons. He was 3-0 against Michigan, making him the first Ohio State quarterback since Tippy Dye to quarterback the Buckeyes to three victories against their archrival. With a 25-3 overall record, he won the Davey O’Brien Award and has his No. 10 jersey retired. 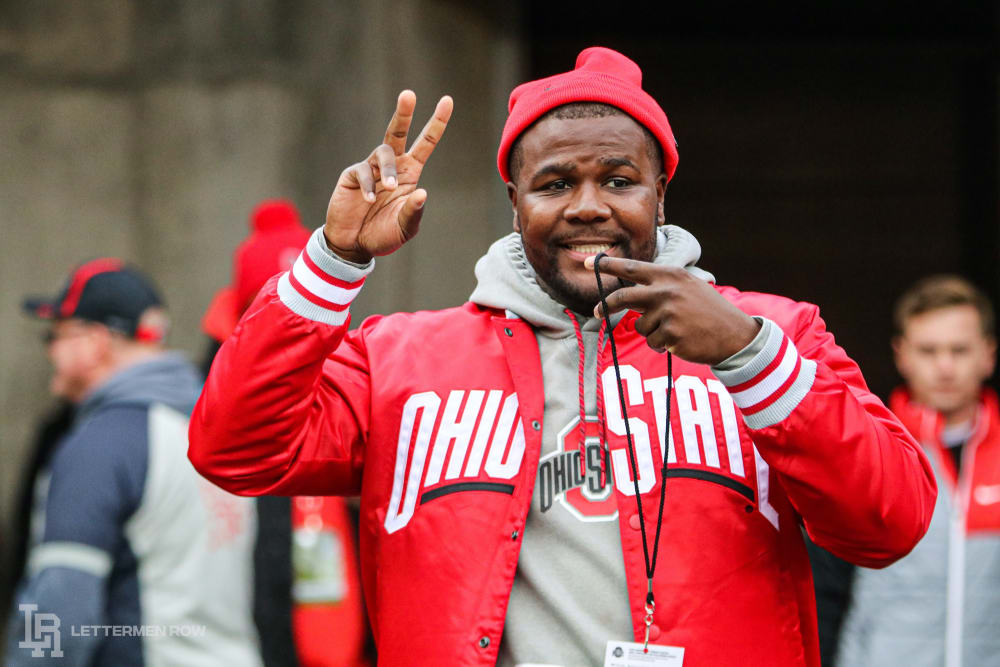 Sure, he only started 11 career games during his time with the Buckeyes. But he was 11-0 in those starts, and the brilliance he showed under center in three games at the end of the 2014 season will never be forgotten. With Barrett sidelined with a broken ankle, Cardale Jones started his first college football game against Wisconsin in the Big Ten Championship Game, a 59-0 rout. He never slowed down, leading Ohio State past Alabama in the College Football Playoff semifinals and Oregon in the national championship game, delivering the Buckeyes their first title since 2002. The Cleveland native’s big arm was the most impressive, but his decision making was key in the 2014 postseason run. He started the first seven games of the 2015 season before being benched in favor of Barrett. Still, Jones perfect record and CFP run will never be forgotten.

Forgotten in the mix of Ohio State quarterbacks, Rex Kern quarterbacked the famed group dubbed the Super Sophomores. After quarterbacking the freshmen team, Kern got his start in 1968 and led the Buckeyes to an undefeated season topped off by a Big Ten title and a win in the Rose Bowl over O.J. Simpson-led USC, sealing Ohio State’s consensus national championship. After falling to Michigan in 1969, Kern led Ohio State back to the Rose Bowl in 1970, losing to Stanford. Known as a stellar passer but more dangerous runner, Kern compiled a 25-2 record across three season. A captain, he never won a Heisman Trophy but finished in the top-five in voting the last two years of his career. 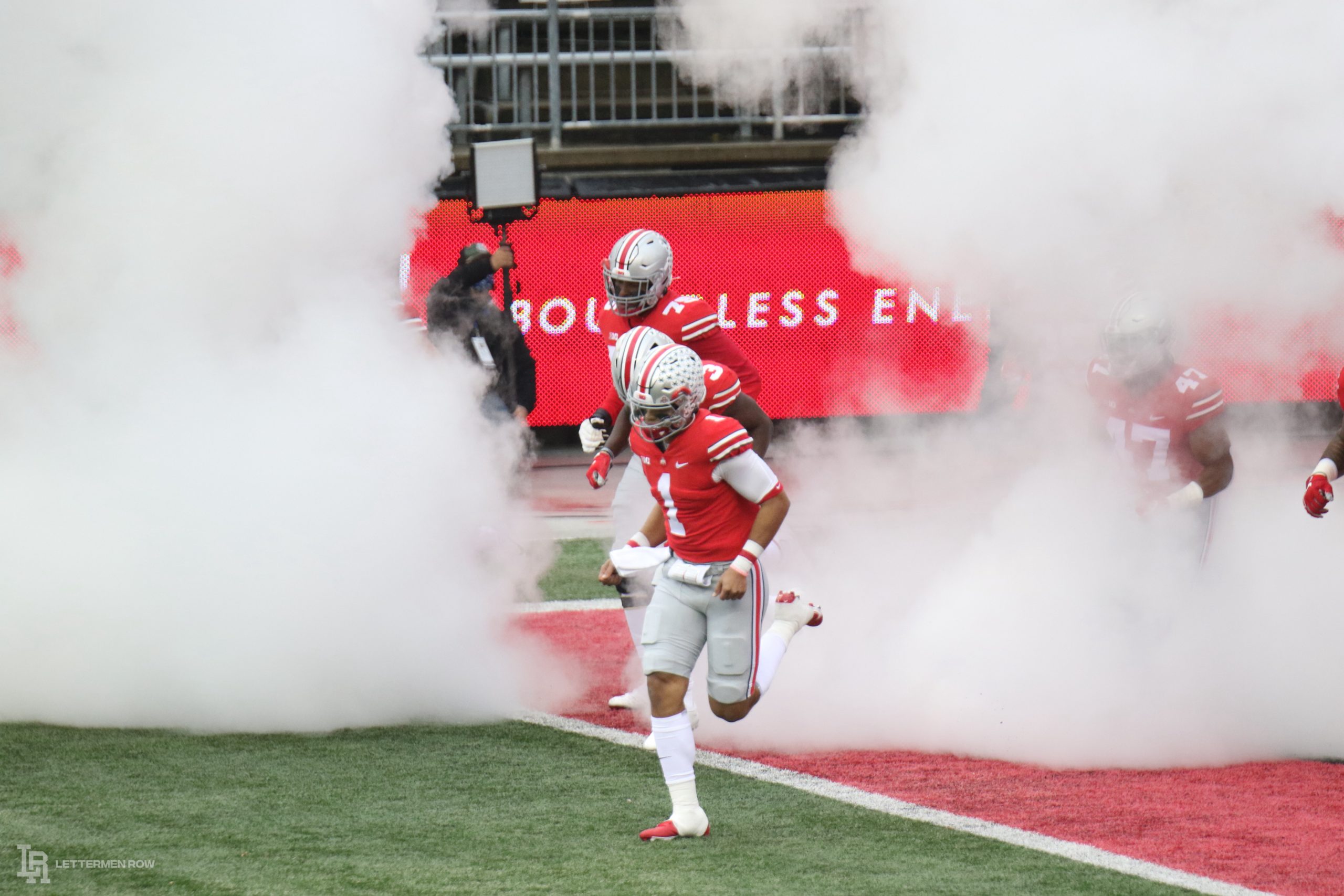 Justin Fields is the most talented quarterback in Ohio State history. (Birm/Lettermen Row)

The Georgia transfer came to Columbus after his freshman season and immediately made Ohio State a national-championship contender. The arrival of Justin Fields immediately changed the trajectory of the Buckeyes, easing Ryan Day’s first two years at the helm of the program. He might not have the most wins, but there’s no questioning the combination of talent Fields had. His leadership partnered with his physical skills made him a dynamic threat whenever the ball was in his hands. He led the charge for the Big Ten to reinstate football this past season, getting redemption in the College Football Playoff with a win over Clemson in the semifinals. But it was the way he dismantled the Tigers which was the tipping point of Fields’ magic. The quarterback took a shot in the ribs and hip in the second quarter, sending him to the ground. He rallied back, however, finishing the game with six touchdown passes.