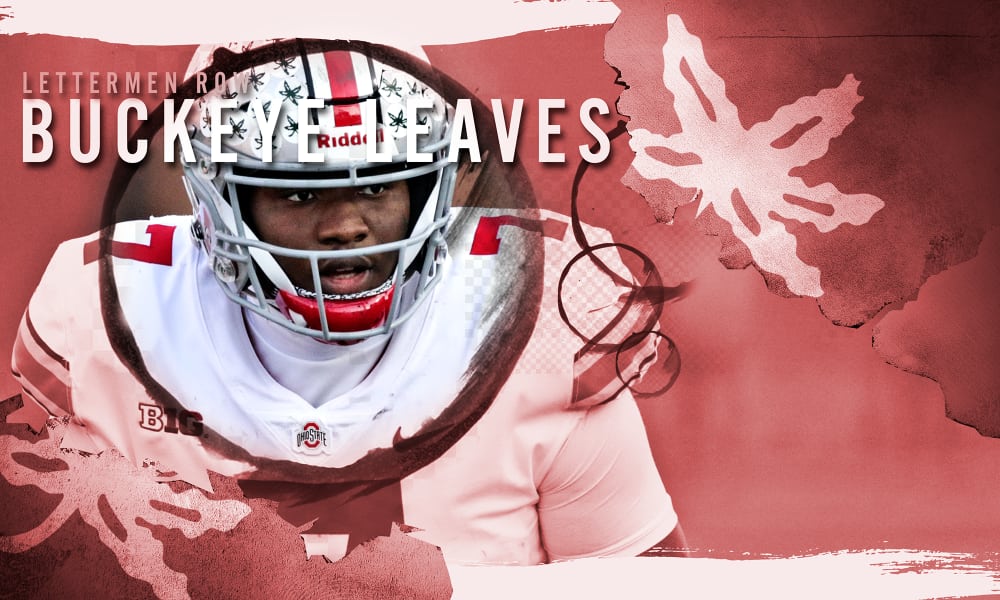 And a shoulder that will be lowered. And a relentless will, bottomless supply of confidence and a lot of toughness that hadn’t really been on display much lately either.

There’s nothing new about the redshirt sophomore quarterback leading the way for the Buckeyes. But the way Haskins did it when Ohio State absolutely needed everything he could possibly provide on Saturday at Maryland was different, and it ultimately tipped the scales in the 52-51 shootout.

“It was probably just our competition, being back home an having those guys talk a little smack to me [that brought it all out],” Haskins said. “I can run. I guess today I just wanted to show it more.”

The evidence was clear, and by the time the overtime duel finally ended, Haskins had added 59 rushing yards with three touchdowns to go with his 405 yards passing and three more scores through the air.

Of all the eye-popping statistical performances from Haskins this season, the way he stuffed the box score against Maryland will stand alone. And his running essentially turned his arm into an afterthought in the same game where he became Ohio State’a single-season record holder for passing yards in a season.

“Dwayne went in there and kept the ball a couple times, and you have to,” Ohio State coach Urban Meyer said. “I just don’t know any other way, or you have to throw it a lot.

“He needed to take that step, it’s the next step in his career. The toughness, the leadership. You’ve got to remember that, that’s a [tough] defense we went against.”

The Buckeyes survived it thanks to Haskins. And he leads the Lettermen Row selections for Buckeye Leaves coming out of the escape at Maryland. 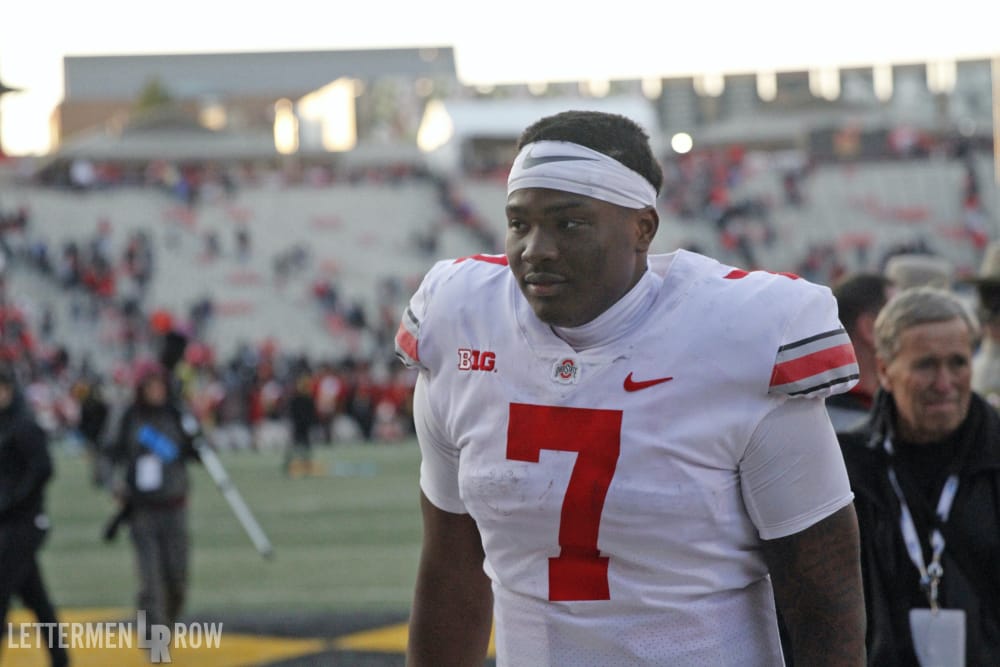 There was no choice but to once again make Dwayne Haskins eligible for an award that Lettermen Row had previously decided to remove him from contention for due to his frequent wins early in the season. Haskins was that good, that important and that tough in the win over Maryland, and it simply had to be recognized. Up next is another huge test against a vaunted Michigan defense, and there’s really no question that if the Buckeyes are going to win The Game, he’s going to have to be a superstar again. 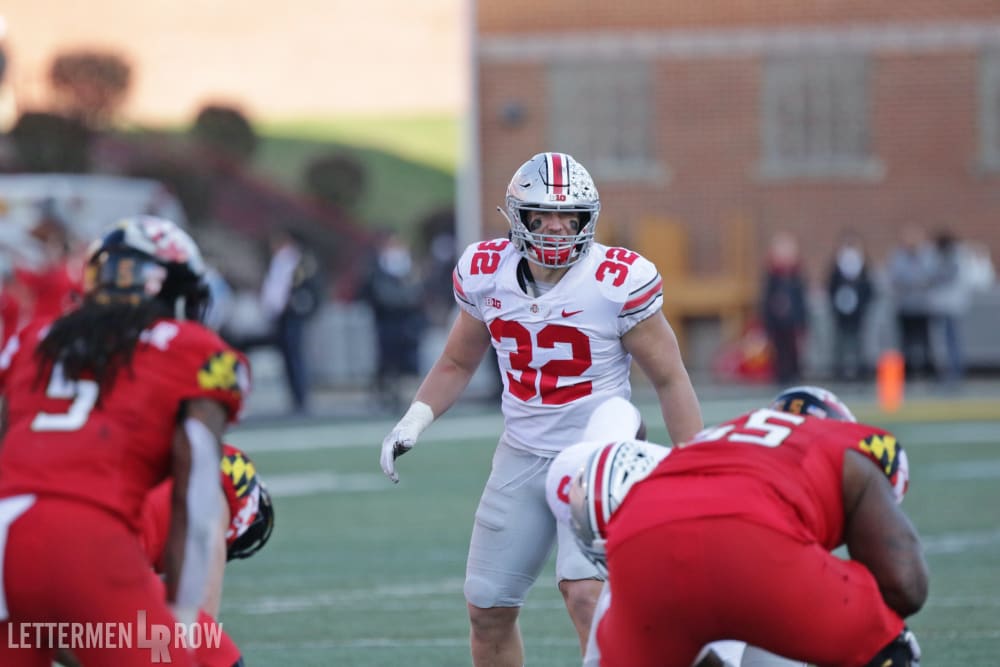 Ohio State linebacker Tuf Borland racked up four tackles for loss in the win at Maryland for the Buckeyes. (Birm/Lettermen Row)

The Buckeyes had all sorts of breakdowns defensively, and every position group will have to shoulder the blame for what happened as Maryland rang up 51 points by the end of overtime. But Tuf Borland provided some bright spots at linebacker, aggressively pursuing plays in the backfield from his spot in the middle and finishing with four tackles for loss and a sack. Ohio State obviously has a lot of room for improvement even at this late stage of the season, but Borland did his part to at least help the Buckeyes get enough stops to come back and win on the road. 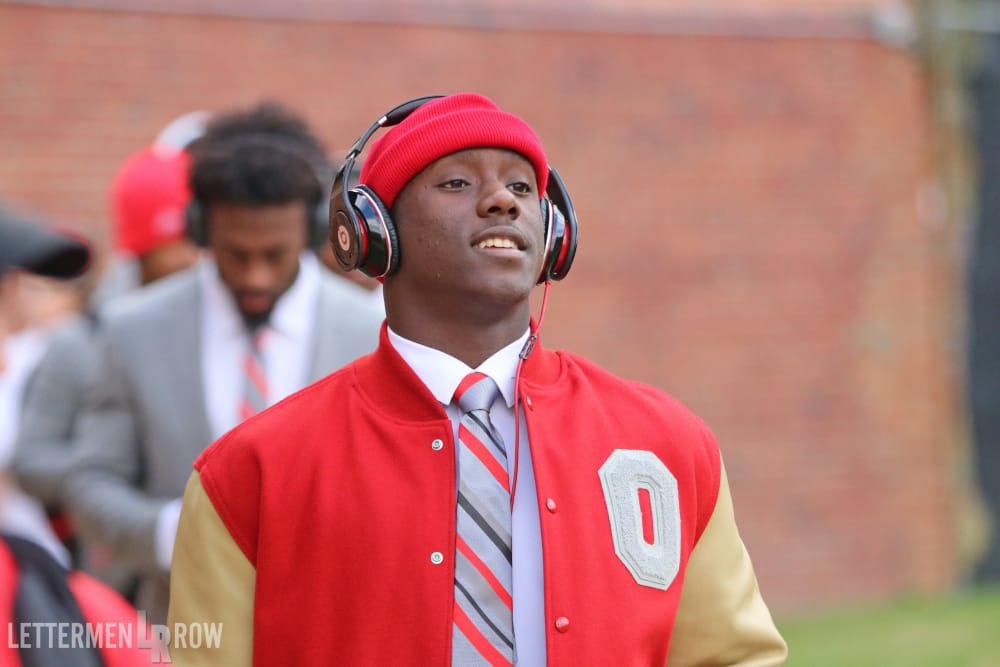 Demario McCall arrived at Maryland in style and left as the new kickoff returner for the Buckeyes. (Birm/Lettermen Row)

The Buckeyes have been missing a spark in the kickoff-return game for a while. But more than that, Ohio State needed somebody just to catch the football first after a complete disaster when it allowed the first kickoff to it of the game to hit the turf and allowed Maryland to recover it. Enter Demario McCall, who was supposed to be the solution for the Buckeyes on special teams this season. The dynamic redshirt sophomore fell out of favor early in the year due to some ball-security issues, but he was key for Ohio State down the stretch with a 42-yard return that helped provide good field position for the crucial game-tying drive in the fourth quarter. McCall should be back as the first-choice option heading into The Game.