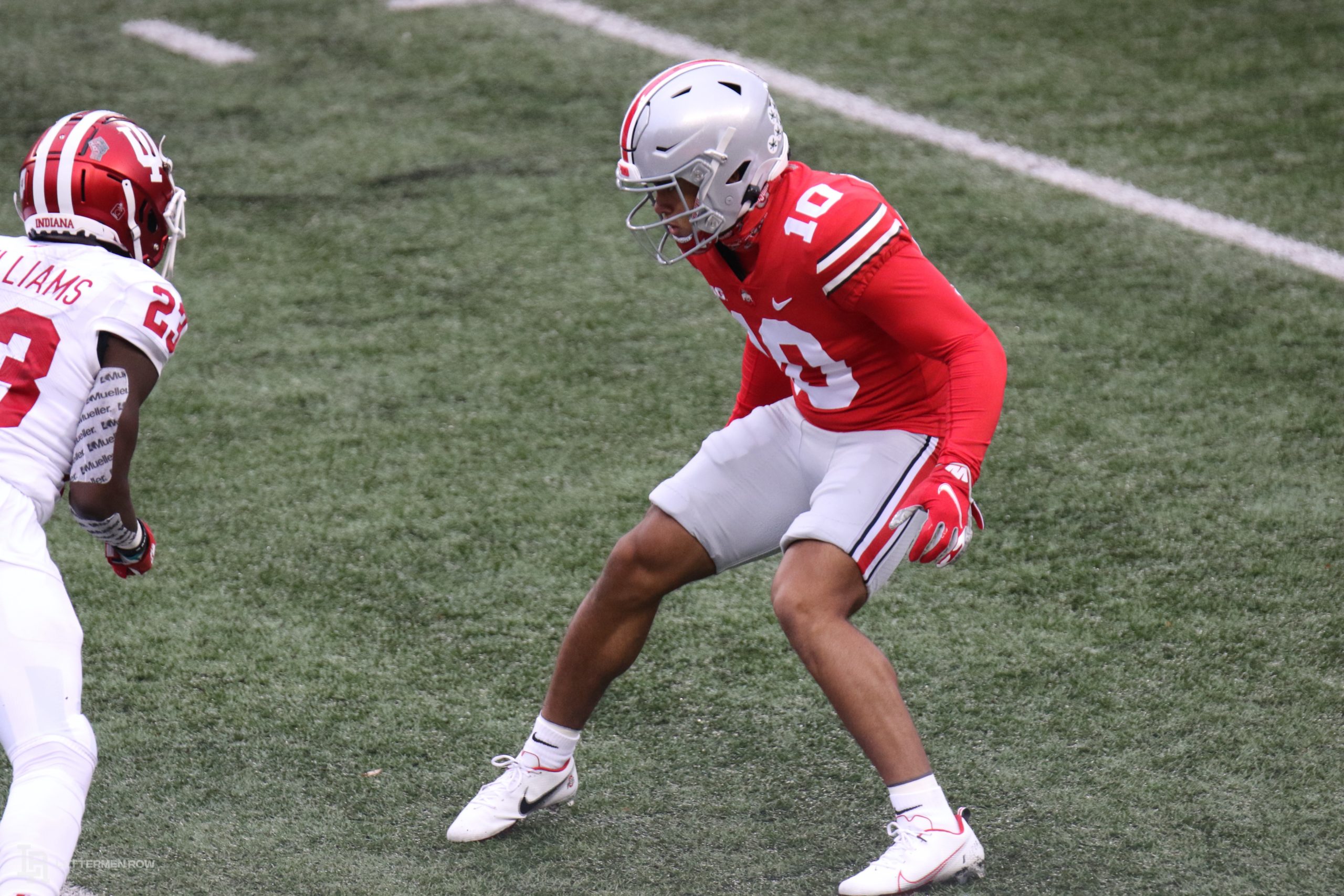 Cameron Martinez is one of five freshmen defensive backs who were signed by Ohio State in the Class of 2020. (Birm/Lettermen Row)

COLUMBUS — Winning in 2020 can’t be taken for granted. But nobody at Ohio State is feeling all that good about the Buckeyes 42-35 escape against Indiana.

Ryan Day knows that something isn’t right. Kerry Coombs knows that too, undoubtedly. The challenge is identifying what is wrong — and according to Day, there’s a checklist to help provide clarity. That list has three items on it, and now Day and Coombs have to decide where the fix is.

“Usually, when you assess something like that, it’s not like: ‘OK, it’s only this,'” Day said. “It’s usually a little bit of this, a lot of this, maybe a little bit here and there. If you tighten up all three of those areas, usually you see improvement.”

So, start with what’s working for the Buckeyes. The linebackers are playing well. The defensive line is playing well, applying a lot of pressure even if they’re not collecting a bunch of sacks. Ohio State has put together dominant halves in all four games.

Then there’s the defensive backfield.

For the third straight game, Ohio State was listless on defense in the second half. Against a top-10 opponent, the lack of energy and focus nearly cost them a chance to continue chasing a national title. The Hoosiers abandoned the run and simply torched the Buckeyes through the air, piling up 491 passing yards — 294 of them in the second half — without resistance until a pair of late fourth-quarter stops sealed the win for Ohio State. Penn State threw for more than 250 yards in the second half against the Buckeyes. 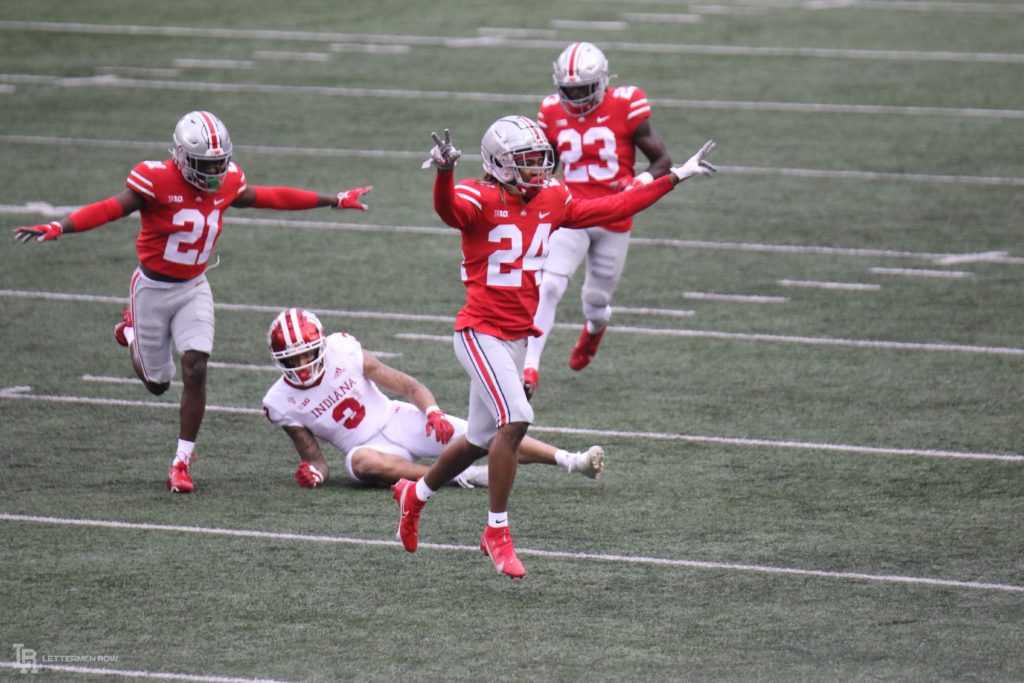 Ohio State has had little reason to celebrate in the secondary through four games in 2020. (Birm/Lettermen Row)

The always proud members of B.I.A. have been plagued by inconsistent play through Ohio State’s first four games. There have been missed assignments, blown coverages and regular miscommunication. Saturday’s performance didn’t give many reasons to believe improvement is happening.

Is it a matter of personnel? Is it a problem with the Buckeyes defensive coaching scheme? If it’s neither of those two things, then Day’s checklist next goes to figuring out if Ohio State is coaching and teaching the correct scheme to the capable personnel.

The Buckeyes are four games into the weirdest season of all time and they’re not going to completely change defensive philosophy mid-stroke. The scheme isn’t changing, so Ohio State needs to make the best of what it is. If there’s a need to adjust things in a more comprehensive way for the future, that isn’t going to happen until the end of this season.

Kerry Coombs hasn’t forgotten how to teach. He’s one of the country’s premier developers of defensive back talent and helped change the culture of the Tennessee Titans defensive backs room in his two year NFL stint. He’s probably spending less time than usual on technique because he’s in a coordinator role for the first time in his life, but Coombs knows how to get the most of the guys he’s leading.

So maybe, just maybe, Ohio State is getting the most out of the currently utilized defensive backs. The challenge to replace Jeff Okudah, Damon Arnette and Jordan Fuller wasn’t going to be easy. The Buckeyes lost Jahsen Wint and Amir Riep in the offseason, and both played a lot of football. Early-enrolled freshman Kourt Williams — who may have started for Ohio State this fall — was lost for the season before it began. At Penn State, veteran cornerback Cameron Brown was lost as well.

It’s not entirely hard to understand the struggles, but at Ohio State the standard is excellence. There can’t be excuses, and so now it’s time for adjustments. The easiest spot to make those adjustments is the secondary, and the Buckeyes, simply put, have nothing to lose by trying to work in new, inexperienced players. That’s especially true at safety, because the play has been so poor it seems like it’d be impossible to go backward. 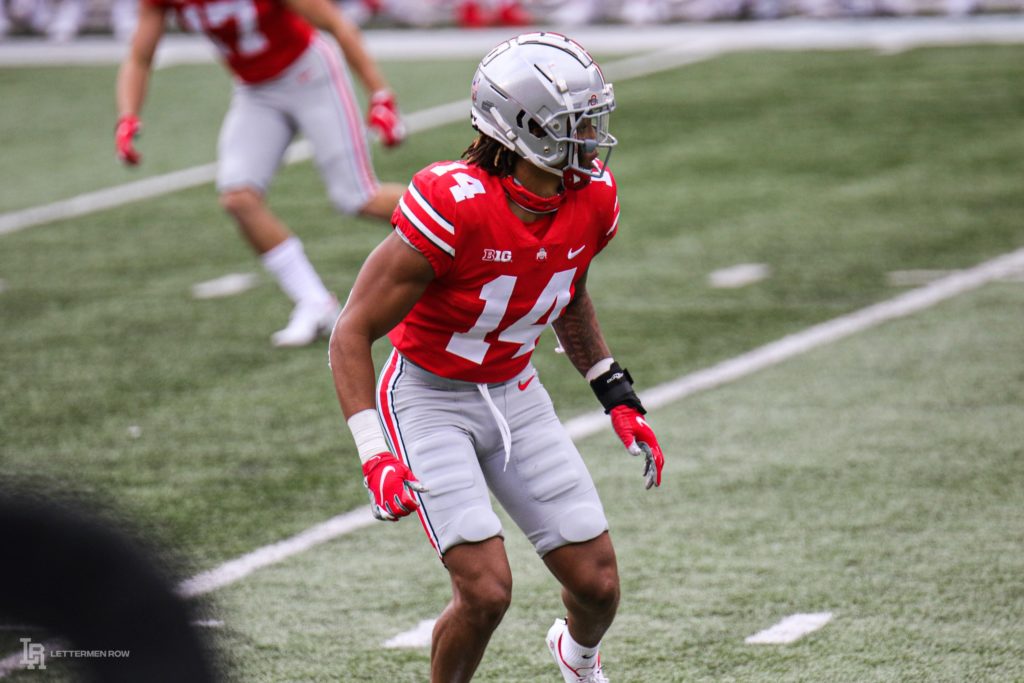 Ronnie Hickman is fully recovered from a knee injury that kept him off the field a year ago. (Birm/Lettermen Row)

Coombs didn’t recruit Ronnie Hickman or Bryson Shaw. He didn’t recruit Lathan Ransom, Ryan Watts, Lejond Cavazos or Cameron Martinez, and Covid-19 forced him to miss out of getting to see what they’re really able to do. Admittedly the things that happen at practice are behind closed doors and inform every decision. But what happens on Saturday is seen by everyone, and it’s hard to imagine any way the back half of the Buckeyes defense could play worse than it did on Saturday. Ohio State recruits as well as anyone in the country. The Buckeyes need to trust their talent.

With no eligibility being exhausted by any player this year, and with Illinois and Michigan State on the docket these next two weeks, it’s time for the young guys to take their swings. Brendon White single-handedly changed a struggling Buckeyes defense in 2018. Maybe there’s someone — anyone — who could provide a similar playmaking spark over the next month.

What is there to lose?

“At the end of the day you have to put the best players on the field — we believe in our guys,” Day said. “We have confidence in our guys and I’ll be very surprised if we have to make changes. But maybe we will. We have to watch the film and see, because almost 500 yards of offense in terms of passing is too much and that’s just not acceptable.”

Calling things objectively, the Buckeyes defense isn’t good enough right now. It’s not a national-champion-caliber defense through four games and almost 60 practices and it has to get better.

That starts in the Ohio State secondary.