COLUMBUS — Pick any unit on an Ohio State defense that had been under fire. All of those Buckeyes just tossed a bucket of water on the criticism.

The defensive line was again collapsing the pocket and scored another touchdown.

Embattled nearly all season, the linebackers delivered hard hits and sure tackling with perhaps the most consistent effort of the year.

The secondary avoided costly penalties, continued to see Brendon White emerge at safety and clinched the game by snagging an interception.

For the first time in a while, the Silver Bullets lived up to the moniker in a 26-6 domination at Michigan State fueled by the defense. And the improvement is coming at just the right time for the Buckeyes as they head into the final two weeks of the regular season with a Big Ten title well within reach.

“But we’re still not where I would like us to be.” 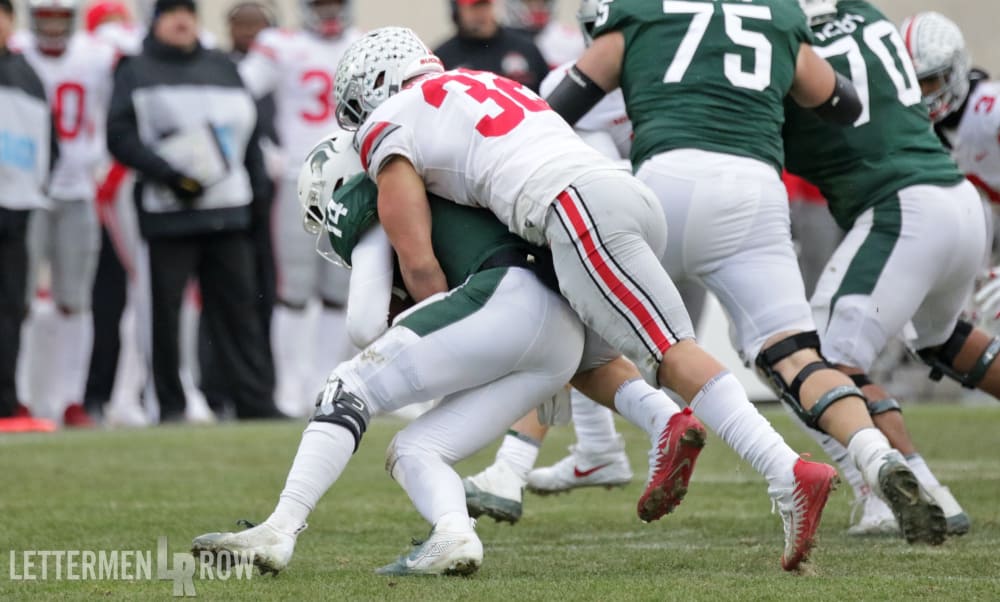 Ohio State linebacker Tuf Borland delivered six tackles in the win over Michigan State — including a big one for a loss. (Birm/Lettermen Row)

The Buckeyes are closer than they’ve been in weeks, though, and the defense deserves a lot of credit for that. More specifically, the steps forward at linebacker appear to be really fueling much of the progress as the starting group of Tuf Borland, Malik Harrison and Pete Werner have elevated their games.

All three of those defenders finished with champion grades in the physical, hard-hitting win over the Spartans. And collectively, the first-team linebackers finished with 17 tackles, 1.5 tackles for loss and 2 passes broken up to help set the tone.

From back to front, Ohio State linebacker Zach Boren returned to the Lettermen Row film lab for a BuckIQ episode looking at areas where the defense has adjusted down the stretch. From personnel to scheme to attitude, Boren looks at all the signs suggesting the Buckeyes are ready for the tests that are looming over the final two weeks of the regular season.