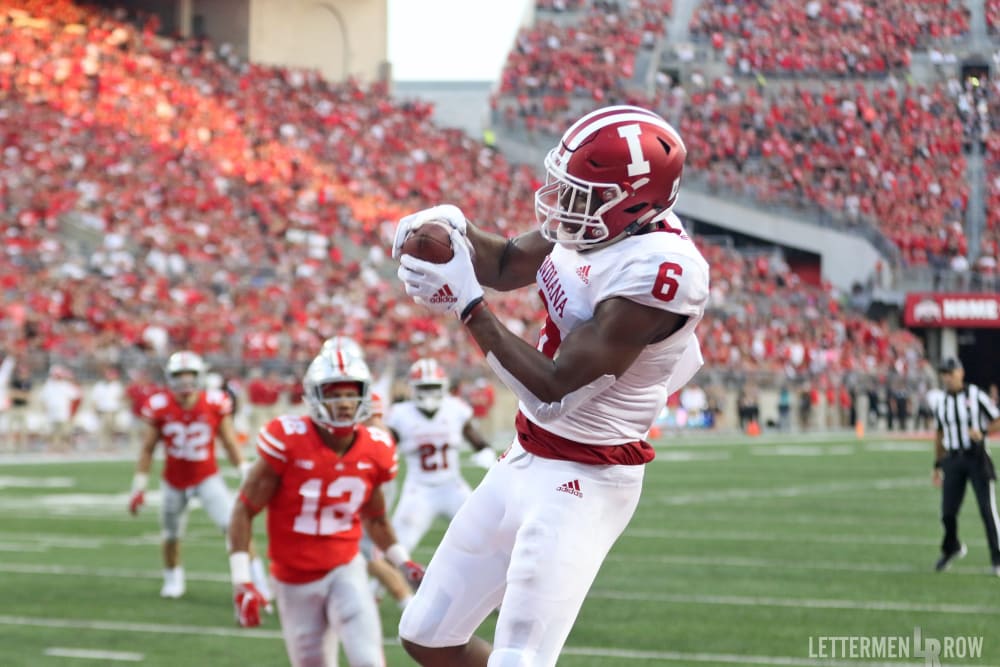 Ohio State has seen way too many wide receivers behind their secondary this season. (Birm/Lettermen Row)

COLUMBUS – It didn’t take long for Urban Meyer to bring up another underwhelming defensive effort. When he did, he spoke bluntly about what everyone who has watched Ohio State this season is thinking.

“That first half was awful,” Meyer said following Saturday night’s 49-26 win against Indiana. “A combination of poor pass rush and not blocking on your guys. …The big hits [through the air], and we’re a man coverage team.

“… We’ve been fine against the run, but the pass has been killing us and that’s going to bite us. Something we’ve got to get fixed.”

Whether or not Ohio State has been fine against the run is somewhat debatable. Penn State quarterback Trace McSorley ran for 175 yards a week ago in Happy Valley. TCU averaged over five yards a carry against the Buckeyes, though that number is inflated a bit thanks to a 93-yard touchdown run. Oregon State ran for five yards per carry as well, including two touchdown runs of more than 75 yards in a four-minute span. 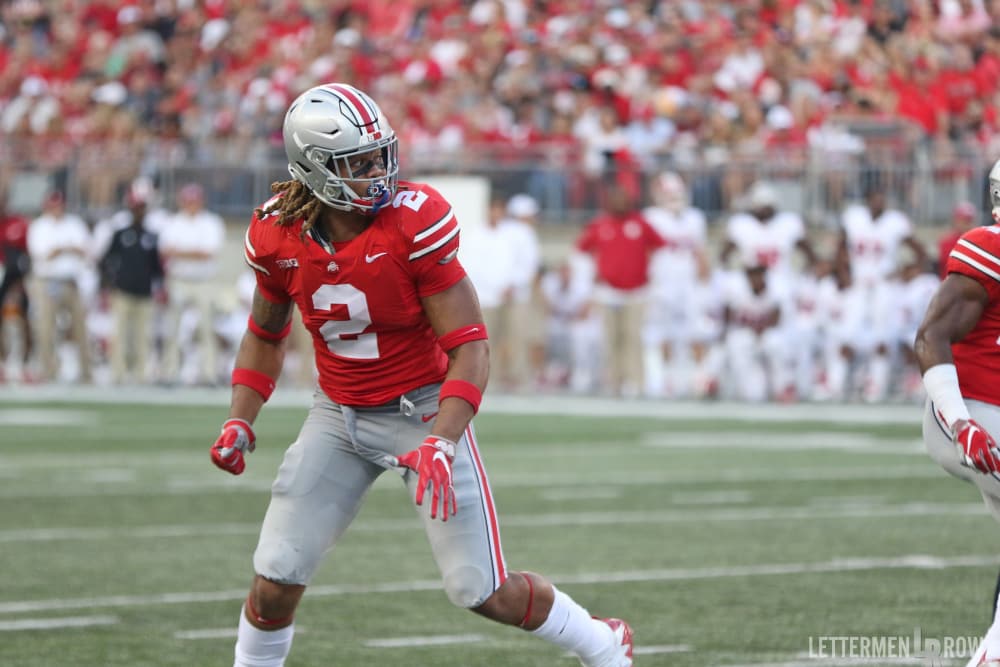 Of course, they’ve not been great against the pass, either. Neither have the Buckeyes cornerbacks, who seem to be penalized for interference or holding far too regularly. There’s no way around it: The Ohio State secondary in total has been lackluster to this point.

Some of that is expected, even though the Buckeyes aren’t going to offer anything that could be potentially construed as an excuse. Still, Ohio State has two new coaches coaching its defensive backs with Taver Johnson taking over as the cornerbacks coach for Kerry Coombs and Alex Grinch handling the safeties. The depth in the Ohio State secondary has been ravaged by early departures to the NFL draft in the last three years, and it can be reasonably stated that has caught up to them a little bit.

But Ohio State is far and away the most talented team in the Big Ten, player-by-player. They pay their coaches well and have high expectations of them, just as they expect the new wave of players on the roster to live up to the standard created by Bradley Roby, Eli Apple, Marshon Lattimore, Gareon Conley, Malik Hooker and others.

Following an awful defensive season in 2013, Urban Meyer discarded zone coverage for a press-man, ultra-aggressive approach that has since become the hallmark of Ohio State football. That recipe, cultivated by Chris Ash and Kerry Coombs and since tweaked by Greg Schiano, has proven pretty darn effective.

But this current roster is missing a key ingredient, and Meyer alluded to it with the pass rush on Saturday.

Maybe that seems unfair since without Chase Young’s epic performance at Penn State the Buckeyes are probably looking not undefeated. But it’s an issue that bears watching. Nick Bosa is the country’s best player, but he’s not available and no one knows when or if he’s going to return. Jonathon Cooper left Saturday’s game and his status is unknown. Dre’Mont Jones, who had one of Ohio State’s three sacks against the Hoosiers, is limited and took maybe 16 total reps in practice last week while he tries to play through a foot injury that’s bothering him far more than he’s publicly admitted.

The injuries are piling up, sure. But there’s no time for excuses. It’s time for fixes.

“We’ve got to keep evaluating,” Meyer said. “But some of those weren’t even on man coverage. So we just have to keep working at it. I trust our staff. I trust our players. We’re banged up a little bit. And we’ve got to fight through it. But gotta play better.” 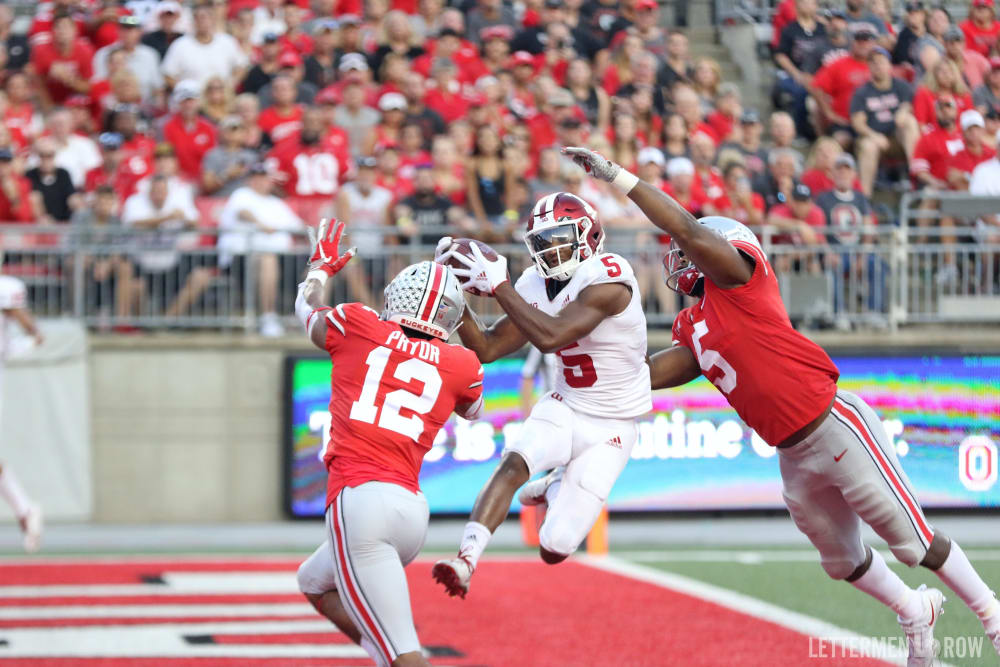 Isaiah Pryor and Baron Browning broke up this pass in the endzone against Indiana. (Birm/Lettermen Row)

That starts with the inexperienced Ohio State back seven needing to step up and create some difference makers. If that means changing up the coverage a bit, so be it. Urban Meyer suggested that’s already begun, but between chunk plays, penalties and missed assignments, there is plenty to rectify.

“That’s our job to fix the problem,” defensive coordinator Greg Schiano said. “There are different reasons. We need to identify them, we need to look in the mirror and ask first, ‘Is it something we’re teaching or coaching?’

“Second, can it be improved or do we have to make a change personnel-wise? There are a lot of steps when you identify issues. … We need to coach better and we need to play better.”

Cleary the Buckeyes need to find some answers.

The bigger concern? There may not even be a consensus as to what the questions really are.