COLUMBUS — There won’t be any option that isn’t considered to try to plug the holes in a leaky Ohio State defense.

Personnel. Scheme. The way the Buckeyes are coaching. All of it is up for discussion as the explosive plays continue to pile up and ruin what at times has looked to be a unit with the potential to operate at a high level.

The inexperience excuse no longer applies for Ohio State with half of the regular season now complete, and Urban Meyer and his coaching staff are now facing a critical juncture for a team with legitimate national-title aspirations.

“I don’t want to get in too much detail other than it’s a variety of things [happening],” Meyer said on Monday. “But getting to the second level, when someone gets a second level, get them on the ground. And then there are some coverage issues we’ve had.

“I have conversations [with the defensive coaches]. But I have so much confidence in the people doing it that we’re going to get that fixed.”

The vast majority of the time, Ohio State doesn’t seem to be in need in of much repair.

The Buckeyes are capable of bottling up even potent rushing attacks. The pass rush is dangerous, the linebackers are starting to turn the corner and there isn’t much doubt about the potential in at defensive back given all the talent the program has recruited over the last few years. 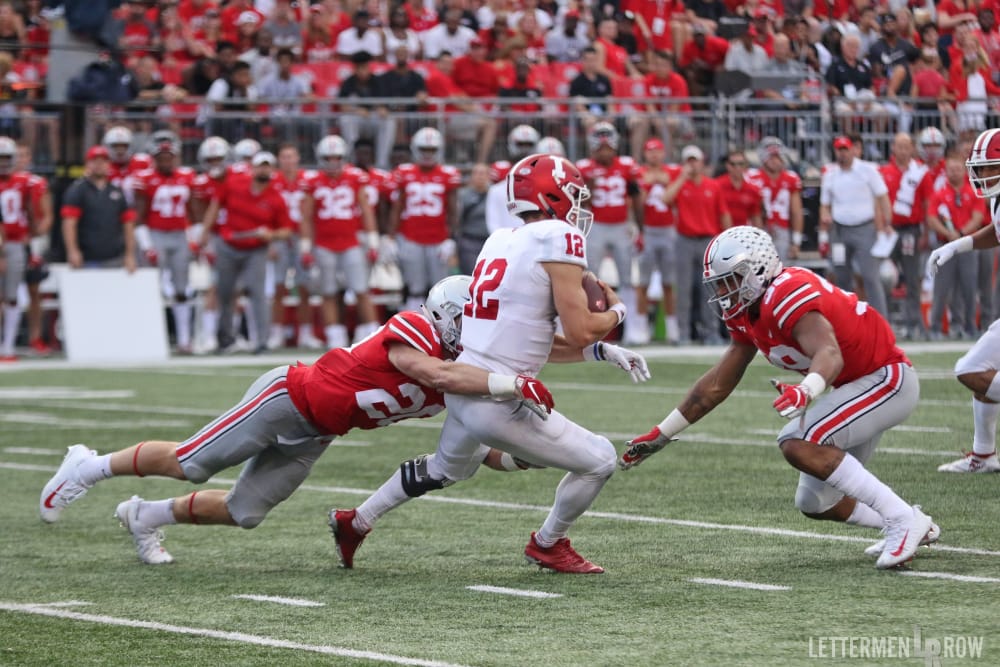 Ohio State has enough talent on defense to roll out an elite unit if the Buckeyes can cut down on the mistakes. (Birm/Lettermen Row)

But there are a handful of plays seemingly every week for each unit that are making it hard for the Buckeyes to truly become an elite defense. There were reps where the Rushmen couldn’t get home last week against Indiana without Nick Bosa, the linebackers still appear to have occasional lapses against the run and the penalties and poor angles in the secondary have been a recurring issue.

And yet, Ohio State has also made the plays needed to stay undefeated, most notably late in the huge clash on the road at Penn State. It also helps, of course, to have an offense capable of providing decent margin for error — although, that also puts the Silver Bullets on the field a lot given how quickly and efficiently the Buckeyes can score points.

Either way, former Ohio State and NFL linebacker Bobby Carpenter was in the Lettermen Row film lab for his first episode of BuckIQ to break down a handful of defensive letdowns from last week’s win over the Hoosiers. And once again, the issues appear to be correctable as the Buckeyes keep developing and gearing up to compete for championships in November.

To catch up on all the previous BuckIQ episodes with former Ohio State players, check out the Lettermen Row channel on YouTube.

Heisman race: Dwayne Haskins keeping tabs, in touch with Tua Tagovailoa
Ohio State won’t back down from press-man coverage: ‘That’s who we are’
Advertisement
Advertisement