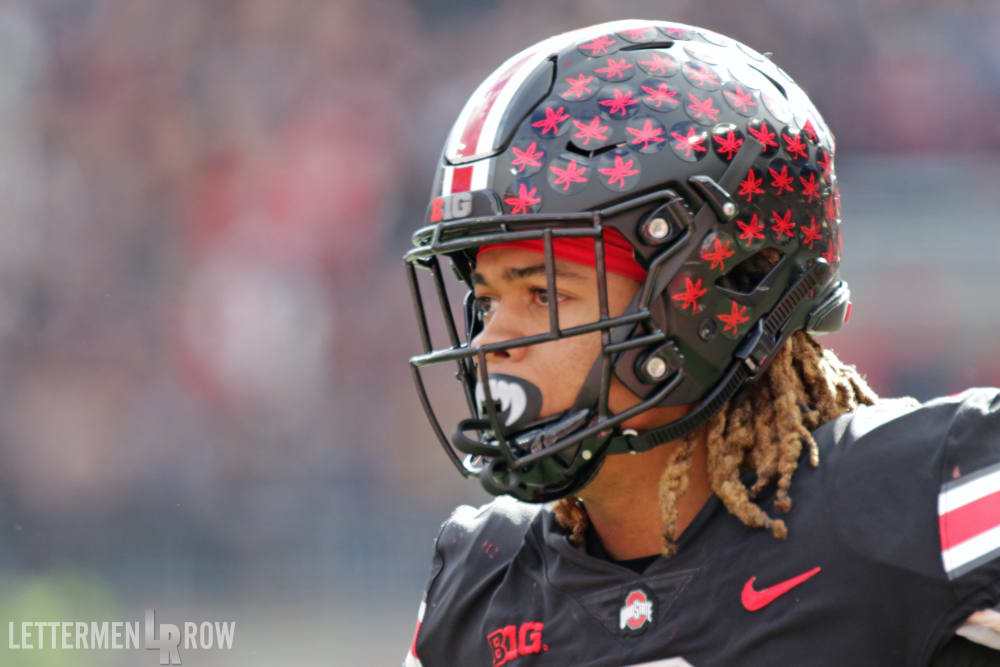 Feel that? No, not the chilled November air. I’m referring to the chaos of the College Football Playoff, Ohio State fans.

It’s here, and the world has had a taste of it over the last week with LSU receiving a shutout beating from Alabama at home and remaining in the top 10. It’s hard for anyone to understand it, but the important thing is that it’s the College Football Playoff rankings on Nov. 6 and not Dec. 2. So, as Aaron Rodgers once said, R-E-L-A-X.

As for the Buckeyes, Urban Meyer and Co. remained stagnant at No. 10 in the latest poll released Tuesday night after an ugly win over Nebraska. And with that, Ohio State stays four spots outside of the playoff picture. So, how can it get there?

Other than winning the rest of their games starting with Saturday at Michigan State, the Buckeyes might require some help around college football in order to make their way into the top four. Last week, I gave you all a handy viewing guide of who Ohio State wanted to win those matchups and only one actually happened (sorry, Joe Burrow). However, it’s back baby, and here are the five games you should watch this weekend and who to root for.

Georgia did not listen to me last week and decided to just end the Kentucky pipe dream right then, and put itself into the SEC Championship game. Fine, but now you should be rooting for Auburn even harder than you did for Mark Stoop’s Wildcats.

If last year wasn’t enough, an Auburn win would completely end the possibility of two SEC programs making the College Football Playoff for the second season in a row. Not saying that Georgia would beat Alabama in Atlanta, but just the fact that there would be basically zero opportunity for the conference to miraculously have the Dawgs join the Tide in that top four at the end of the season would be a warm feeling in many people’s hearts.

Also, possibly even more importantly, it would likely move Georgia out of the top 10 in the rankings to assist the Buckeyes in their quest for the top. Unless, you know, they pull an LSU.

So, I guess for this week, War Damn Eagle.

Speaking of the Tide, Ohio State would really appreciate if they could just keep on rolling through the month and into bowl season.

After just demolishing LSU in shutout fashion last week, Alabama returns home against with Mississippi State — and you don’t need to watch. The Tide are favored by more than three touchdowns in this “top-20” matchup. And if you think about it, that’s kind of insane. I do not have a doubt in my mind that Nick Saban will be sure his team covers that spread this weekend, and if you play for Ohio State or are a fan of the Buckeyes you should want that every week until late December.

I have no idea how many different ways I can say this: IF YOU WANT OHIO STATE TO MAKE THE COLLEGE FOOTBALL PLAYOFF, YOU HAVE TO ROOT FOR ALABAMA TO WIN OUT. You may not like it, but yes, you have to support Nick Saban at least for a little bit. He was the last Michigan State coach to beat the Buckeyes in East Lansing, and that was nearly 20 years ago so the least you can do is hope the guy helps your team. That is all.

At first glance, you may see this game and think: Why in the world would I care about a sub-.500 team Ohio State already beat playing a top-10 team on the road?

The answer: The Big 12, and slightly improving Ohio State’s strength of schedule.

Hear me out, TCU is has struggled hard since losing to the Buckeyes earlier this season, losing four of their last six including beating a 3-6 Kansas State team last week thanks to a missed extra point in the fourth quarter. With all that said, however, we’re talking about the Big 12 here — the most dysfunctional conference in college football.

The lack of defense played in the Big 12 gives me hope that this weekend’s clash of the Horned Frogs and Mountaineers in Morgantown could be more interesting than some will think. Sure, on paper West Virginia should just annihilate TCU and move on to two weeks of preparation for the biggest game of their season against Oklahoma. But don’t be shocked if for some reason this is close for some reason … or not.

Overall, Buckeyes fans should be Horned Frogs fans this weekend.

The Irish narrowly avoided my hope of a Northwestern upset last week, and I’m not going to be the crazy guy to predict this Florida State team to show signs of life for the first time all season and beat a top-5 team on the road.

Sidebar: I compare the current state of the Florida State football program to the movie “Space Jam.” Why? Because Jimbo Fisher is basically the Monstars and the football team is all of the NBA players the Monstars stole the talent from.

Not actually, but the Seminoles have not been great since he had one foot in College Station, Texas, halfway through last season. (Also, Space Jam is a great film if you haven’t seen it, by the way. Back to football now!)

I do not see any way for Notre Dame to lose this one at home unless they just completely blow it. However, in terms of what would assist the Ohio State on their path to the College Football Playoff, a Seminoles upset in South Bend would be just glorious for Urban Meyer and the Buckeyes. And if it doesn’t happen this week, be sure to watch next Saturday when the Fighting Irish travel to Yankee Stadium for an interesting clash with Syracuse.

In my humble opinion, I think this will end up being one of the games of the weekend. Washington State is No. 8 in the current College Football Playoff rankings, and to be honest I don’t know why. Sure, quarterback Gardner Minshew leads the nation in passing yards this season, but the most impressive wins for the Cougars are a 14-point victory at home against Oregon and a three-point win on the road at Stanford — neither of which are currently ranked.

Oppositely, Colorado has had one of the weirdest seasons I have ever seen. The Buffaloes kicked off the year very hot with a 5-0 record and even sat at No. 18 in the coaches poll during Week 6 of play. Since then, though, it has been tough sledding for coach Mike MacIntyre, as the Buffs have lost their last four games — which is why I’m thinking this one may get weird.

Folsom Field is a strange place to play, and a Colorado win would completely eliminate a team from the “Conference of Champions” from College Football Playoff contention. And if you’re an Ohio State fan, you should also be thinking “‘Sko Buffs” all weekend long.