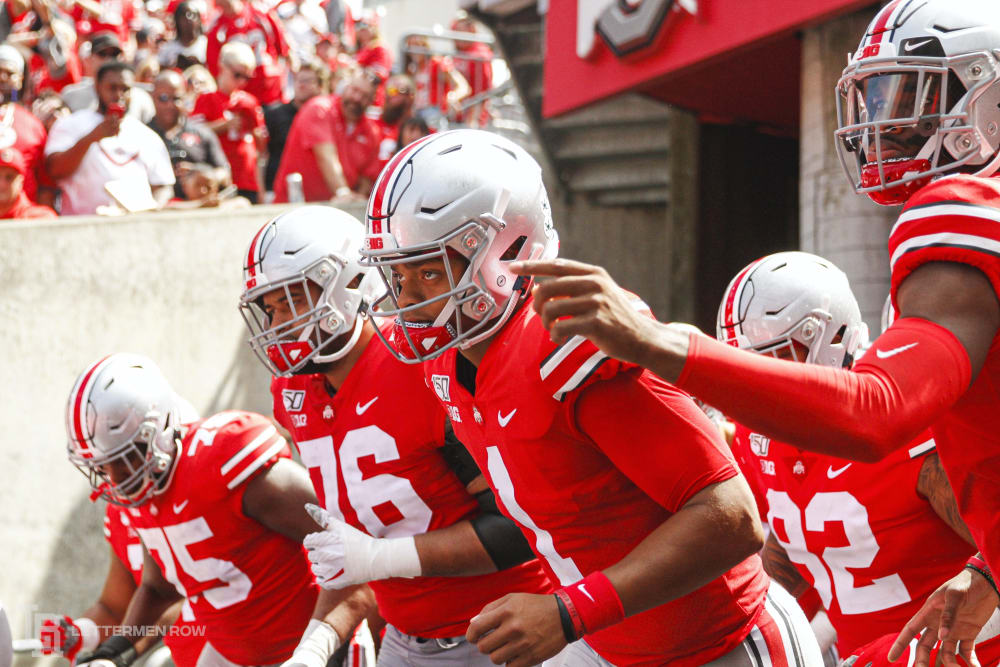 Ohio State dominated Cincinnati from start to finish on Saturday at the Horseshoe. (Birm/Lettermen Row)

COLUMBUS — The challenge did really look like it was bigger for Ohio State.

It’s just that the Buckeyes raised their own game accordingly, taking something that was supposed to be an early test and shattering the grading scale against Cincinnati.

Ohio State coach Ryan Day certainly walked off the field on the Horseshoe in a different mood than the week before after an uneven opener. And in the process, the Buckeyes picked up in-state bragging rights, sent a warning shot to the rest of the Big Ten heading into conference play and spoiled any chance of a memorable homecoming for Luke Fickell with a 42-0 destruction of the Bearcats.

” … I’m disappointed that we couldn’t give them a real game.”

With the way the Buckeyes are rounding into form with one of the most talented rosters in the country, the Bearcats almost certainly won’t be the last team to feel that way this season. And before turning the attention to the next team with a crack at the Buckeyes as they prepare to head to Indiana, Lettermen Row is looking back again at the romp over Cincinnati with the lessons learned over the weekend.

Ohio State can torture defenses in so many ways

Thanks to the incredible depth, talent and versatility of the Ohio State personnel, just about the only limit to what the attack can do is how much imagination Ryan Day has every week. The Buckeyes can go under center and be a traditional pro-style team with multiple tight ends or even a fullback look. They can spread the field with five wide receivers or create mismatches by putting three or four tight ends on the field. They can unleash dangerous Run-Pass Options with Justin Fields using his dual-threat ability at quarterback. All of it was on display against Cincinnati, and Fields already seems to be opening up the possibilities in the playbook and letting Ohio State apply even more pressure to opponents thanks to all the different ways it can move the football.

The look at the progress for the Next Great Ohio State Pass Rusher had to wait a week with Tyreke Smith limited for what appeared to be precautionary reasons in the opener. But the sophomore was cleared to give it a go on Saturday, and he certainly lived up to the growing hype that he’ll be the guy to take the torch and lead the Rushmen next season when Chase Young is done terrorizing quarterbacks at the college level. Smith played a key role in the sequence that led to the blocked field goal that ultimately preserved the shutout, flying around the edge for his first sack of the season and then holding his ground to stuff the rush with a third-down tackle two plays later. Ohio State can still get stronger up front when Jonathon Cooper returns, which could be as early as next week at Indiana. But the return of Smith and Tyler Friday has already provided a boost for the Buckeyes. 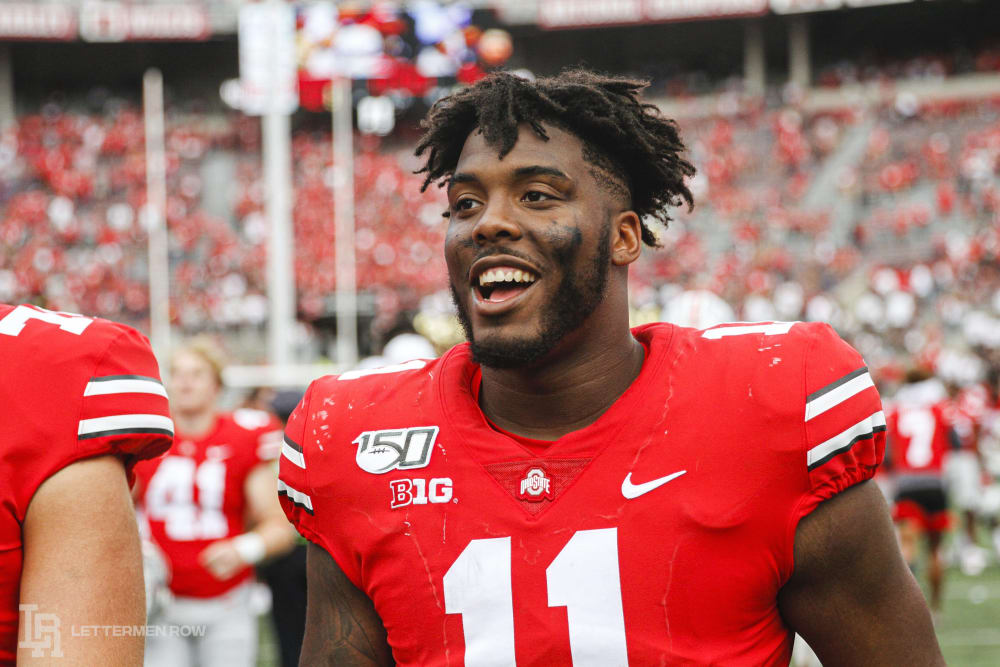 Maybe wide receivers coach Brian Hartline will still find a few teaching points like he did the last time Garrett Wilson was leaping up to make a jaw-dropping catch in the Horseshoe. But it’s hard for the untrained eye to find any flaws with what the freshman did in the north corner of the end zone, especially since his latest highlight-reel grab wasn’t in a scrimmage and actually counts for the Buckeyes. The freshman from Texas only made the one reception in the win over Cincinnati, but he certainly made the most of it by soaring up to snatch the 9-yard pass from Justin Fields and again raising expectations for what he can provide right away at receiver.

There is plenty of credit to go around for the work the much-maligned linebackers have provided through two games. But it’s Malik Harrison who best represents how significant the turnaround has been as he’s clearly taken his game to a higher level. There has never been any reason whatsoever to doubt Harrison’s ability to be a difference-making force on defense thanks to his freaky athleticism. But whether it was the scheme, miscommunication or maybe poor fundamental instruction, it wasn’t translating to the field — and Harrison obviously wasn’t alone in those struggles. But those appear to be in the past now with the new coaching staff validating Harrison’s decision to put off the NFL for a year, and with 2.5 more tackles for loss and another assisted sack against Cincinnati, his stock is soaring. 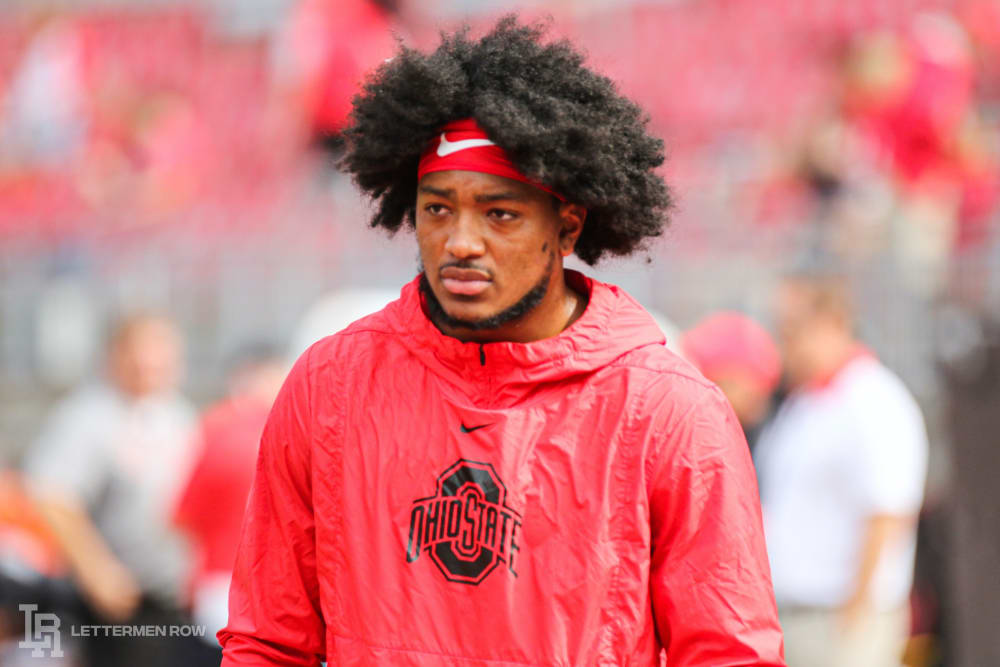 Ohio State linebacker Malik Harrison is playing at the highest level of his career with the Buckeyes. (Birm/Lettermen Row)

Yes, Damon Arnette dropped an interception in the opener. It’s not easy to catch with a bulky cast on one hand, though.

Yes, Damon Arnette got beat on a perfectly thrown deep ball against Cincinnati. No, it’s not that simple for players to lock back in after being told their day is over and to relax on the sideline.

The senior cornerback doesn’t need anybody making excuses for him, and Ohio State does hold everybody who steps on the field to a high standard. But Arnette seems to strangely come in for a lot of criticism that doesn’t really match up with what the Buckeyes see as reality, and defensive coordinator Jeff Hafley was quick to go to bat for him after the game ended.

“I want to make sure that I say this,” Hafley said. “You guys saw Damon Arnette get hit on that go ball at the end of the game. I know he was frustrated. I had told Damon he was done for the game, he had actually unbuckled his shoulder pads. Sevyn Banks was going in, and Sevyn got hurt on the kickoff so Damon ran on the field. I’m not using that as an excuse by any means, but I credit him for going in.

“As a coach, I take responsibility for that. I admit my mistake, and I want to have Damon’s back on that so everybody understands it.”