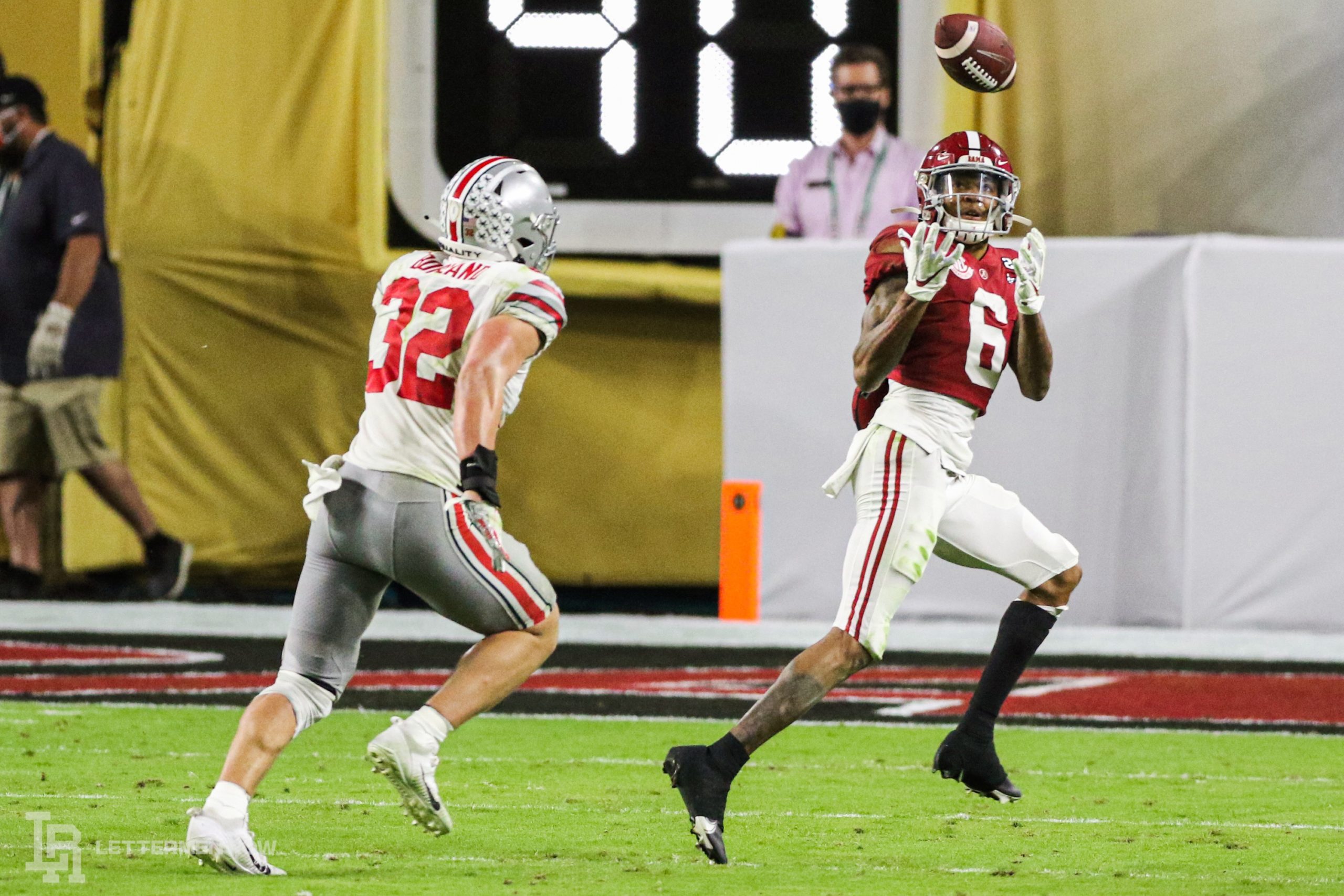 MIAMI GARDENS, Fla. — There was no happy ending for Ohio State.

Waiting in the final chapter of what was supposed to be a fairytale for the Buckeyes was a monster, and they simply couldn’t slay it.

The offense couldn’t find its top gear. The defense was absolutely picked apart. And injuries and positive tests that Ohio State had mostly shrugged off during this unprecedented season finally caught up with it in key spots as Alabama dominated the national-title matchup in a 52-24 decision on Monday night at Hard Rock Stadium.

Make no mistake: The Buckeyes didn’t make any excuses, and the Crimson Tide was clearly the better team. But Ohio State had a handful of chances that showed it belonged on the championship field before the missed opportunities and blown coverages caught up with them.

Now the Buckeyes head into an interesting offseason full of intriguing personnel decisions on the roster along with a looming situation to watch on the coaching staff if Urban Meyer takes the Jacksonville job as expected and tries to raid the program of key staff members.

Bottom line: Ohio State proved it deserved a shot at the title, but it was outclassed in every phase by rampaging Alabama.

The Lettermen Row postgame coverage starts with that Snap Judgment as Ohio State’s bid for another national championship came up short in South Florida. 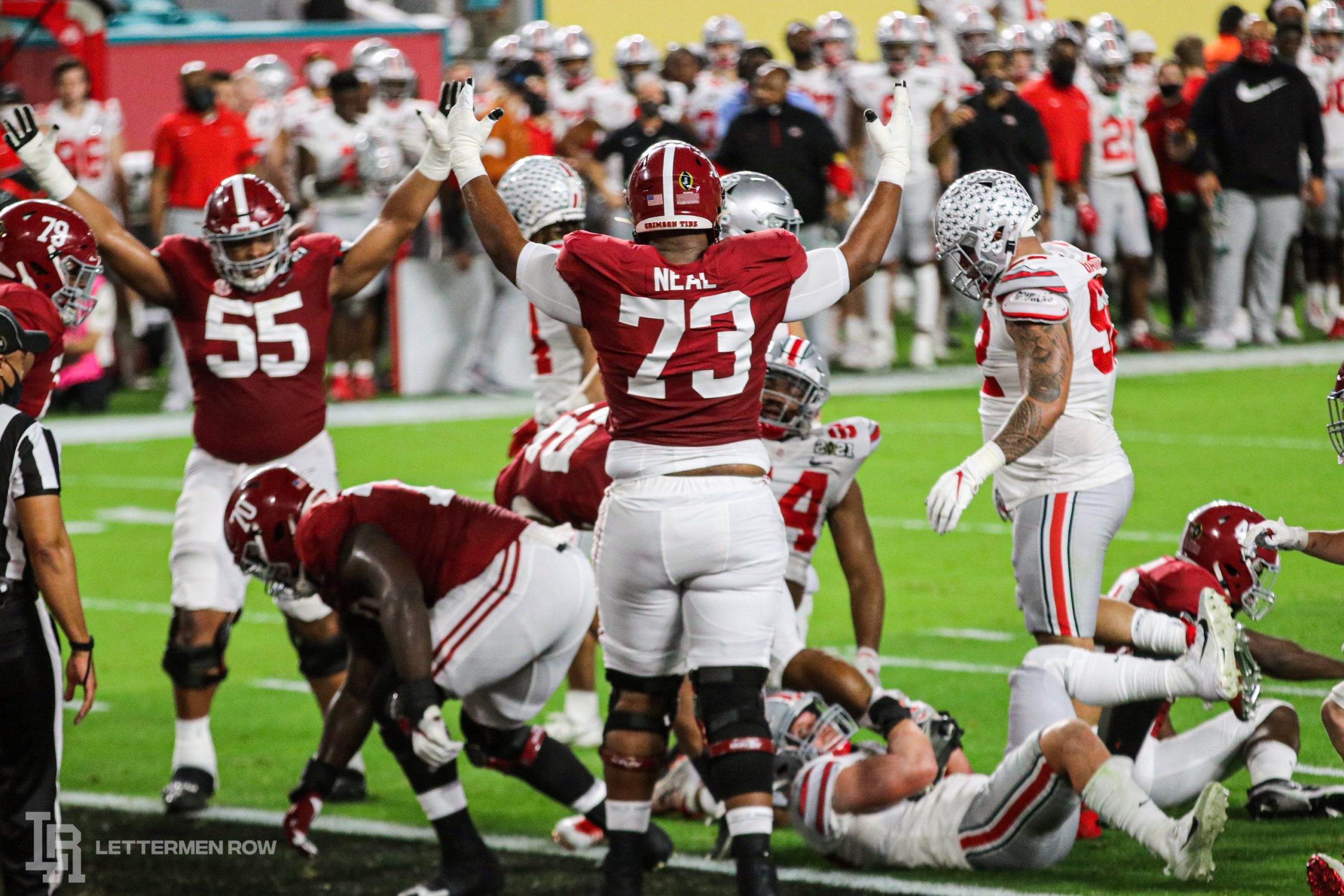 The issues weren’t new, but Ohio State thought it had made enough progress in the secondary that it could generate a couple stops and at least somewhat slow down the vaunted Alabama passing attack. Instead, the Buckeyes were constantly on the back foot, repeatedly confused by motions and completely unable to find a successful matchup against Heisman Trophy winner DeVonta Smith.

Granted, just about everybody this season has struggled against the Crimson Tide, so it’s really not a tremendous surprise. But for a program with as rich of a tradition in the secondary as Ohio State has built, it was staggering to see it picked apart so effortlessly. The Buckeyes never really had a chance to build the depth in the back end thanks to the challenges created by the pandemic, and there is plenty of talent on hand for the future. But Kerry Coombs will have to answer some questions heading into his second season as the defensive coordinator.

Ohio State will never blame injuries for anything, but there was no question that removing Trey Sermon from the lineup after the first drive was a massive blow to the attack. Add in the lingering hip-pointer issue for quarterback Justin Fields and a leg injury that Wyatt Davis has gamely battled through over the last month and it’s understandable why the Buckeyes weren’t quite firing on all cylinders against a physical Alabama defense.

Master Teague gave a bit of a lift with two first-half touchdowns, but the junior running back simply doesn’t have the cutback ability or vision in the hole that Sermon has used to elevate the Buckeyes in the postseason. The setback for the ground game trickled over to the passing attack, which never was able to get in a rhythm in what will likely be a disappointing end to the Ohio State career of Justin Fields. There were opportunities available for the Buckeyes, but they just couldn’t quite connect on them — with no play better summing that up than the near-miss on what appeared to be a perfectly-blocked screen late in the second quarter. 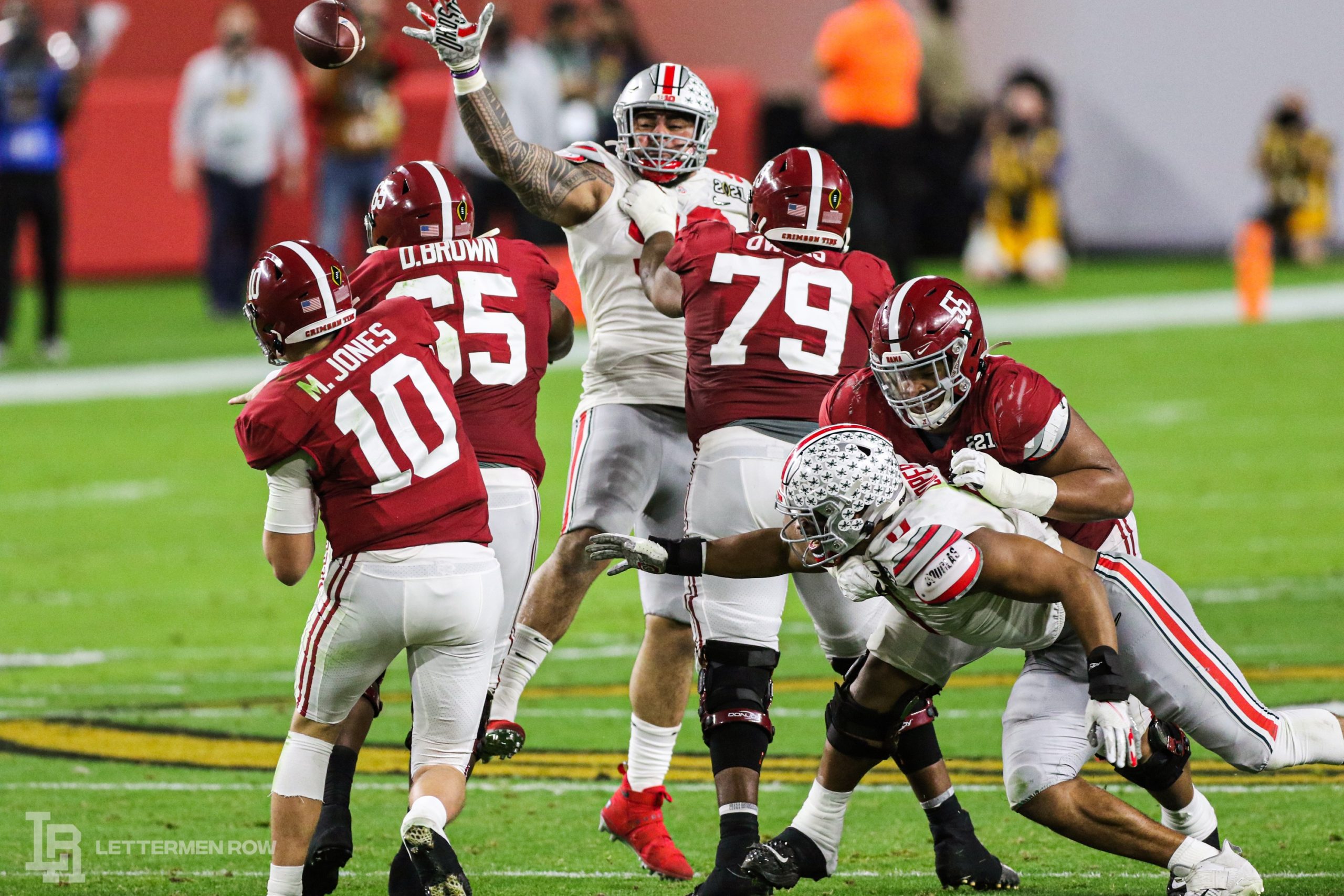 Eventually the Next Man Up approach gets stretched too far, and Ohio State simply didn’t have enough in reserve at defensive tackle to lose such a key piece of the unit. The pandemic was a nonstop challenge for the Buckeyes over the last six weeks, and for the most part it did an admirable job containing it after it got into the Woody Hayes Athletic Center in November. But the one place the Buckeyes really couldn’t afford to lose anybody was in the heart of the trenches, a spot where they had been incredibly stout with Tommy Togiai alongside Haskell Garrett. His absence truly stung for Ohio State, which missed more tackles against the rush than it has all season and also couldn’t collapse the pocket from the middle with the consistency that gave Clemson fits in the Sugar Bowl.

Retooled Buckeyes will be back in contention

Ryan Day will obviously have to replace some key pieces, most notably with a generational talent at quarterback almost certainly heading to the NFL. But he’s got an absolutely loaded roster, a dynamic recruiting machine and a program that is built to contend for championships on an annual basis. The Buckeyes need to get the quarterback situation just right as C.J. Stroud, Jack Miller, Kyle McCord and potentially a graduate-transfer with previous experience contend to replace Fields. But the Buckeyes have a useful head start thanks to the elite recruits dotting every unit, and if they get a more normal year of development, Day will be right back in the College Football Playoff next season.