Justin Fields led the Ohio State offense, even in the title loss to Alabama. (Birm/Lettermen Row)

MIAMI GARDENS, Fla. — This was not the ending Ohio State fought for all year.

The Buckeyes scratched and clawed, pushed, petitioned and pleaded for a season after their football schedule was canceled in September. And when it was reinstated, the Buckeyes had one goal in mind: Winning a national title.

Leading the charge to play a season with a championship in mind? Superstar quarterback Justin Fields, who knew his team had the tools to compete for a crown.

Except Monday night inside Hard Rock Stadium, the ending wasn’t what Fields had in mind. There was no national title, as the No. 3 Buckeyes were rolled 52-24 by No. 1 Alabama and Fields had to walk to the locker room through a sea of confetti that was falling for the Crimson Tide.

“We’re just going to use it to get back and just work our butts off.”

Fields did everything he could for five months to put Ohio State a position to win a championship. He never considered opting out of the season to prepare for the NFL. He made a petition to play the season. He torched opposing defenses nearly all season, including the vaunted Clemson defense for nearly 400 yards and six touchdown passes en route to a national title appearance.

The only thing he couldn’t do was help the Buckeyes overcome a rash of injuries and missing pieces to lift them to a national championship win Monday night. Fields struggled to generate offense against the Crimson Tide, failing to crack 200 passing yards and only tossing one touchdown pass.

And although he will likely leave Ohio State for the NFL Draft having never won a national championship, he is in an elite group of all-time great Ohio State quarterbacks.

“He’s a warrior,” said Ohio State wide receiver Chris Olave, who led the Buckeyes with eight catches for 69 yards against Alabama. “I mean, that’s a guy you always want on your team. He’s a leader on and off the field. And people look up to him. And the season he had this year, the growth he had from last year, it’s huge. And I’ve got all love and all respect for him. Can’t wait to see him do big things.”

Fields was the catalyst for the Buckeyes run to the national championship game, which earns him a Buckeye Leaf. But he wasn’t the only Buckeyes star who stood out despite the championship game loss. Lettermen Row is handing out individual awards after a tough title-game loss. 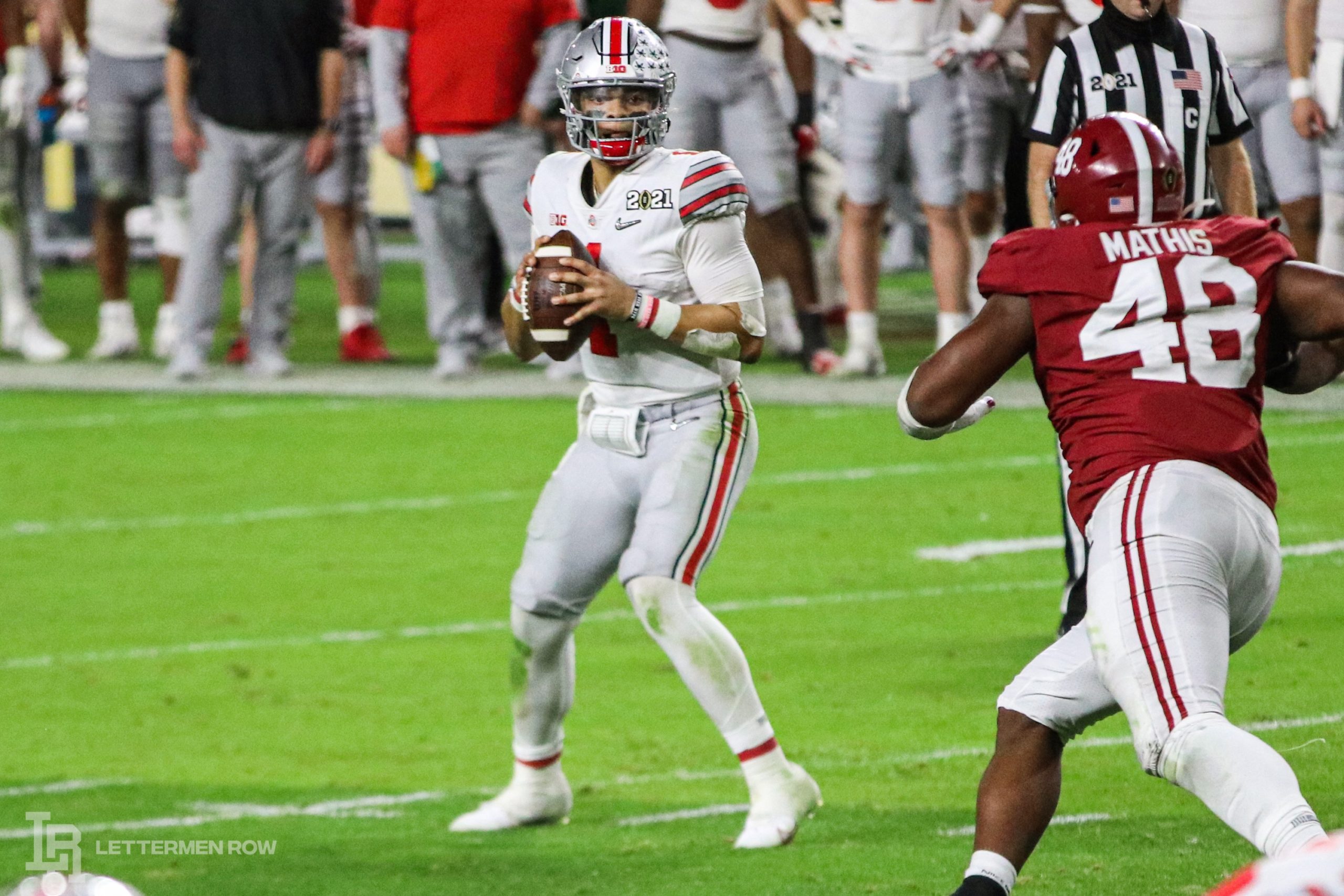 Justin Fields did not finish this season he fought for at Ohio State the way he wanted to. No, his performance didn’t want to lose the national title game. But after helping save the college football season, being named the best offensive player in the Big Ten and destroying Clemson in the College Football Playoff semifinal, Fields made it to the title game and had the Buckeyes within one win of a championship. Fields finished the night against the Crimson Tide with just 194 yards passing and one touchdown throw to go along with 67 yards rushing, a modest performance for the future first-round NFL draft pick. But he helped the Buckeyes play a season — and nearly win a national title. That certainly is worth a Buckeye Leaf. 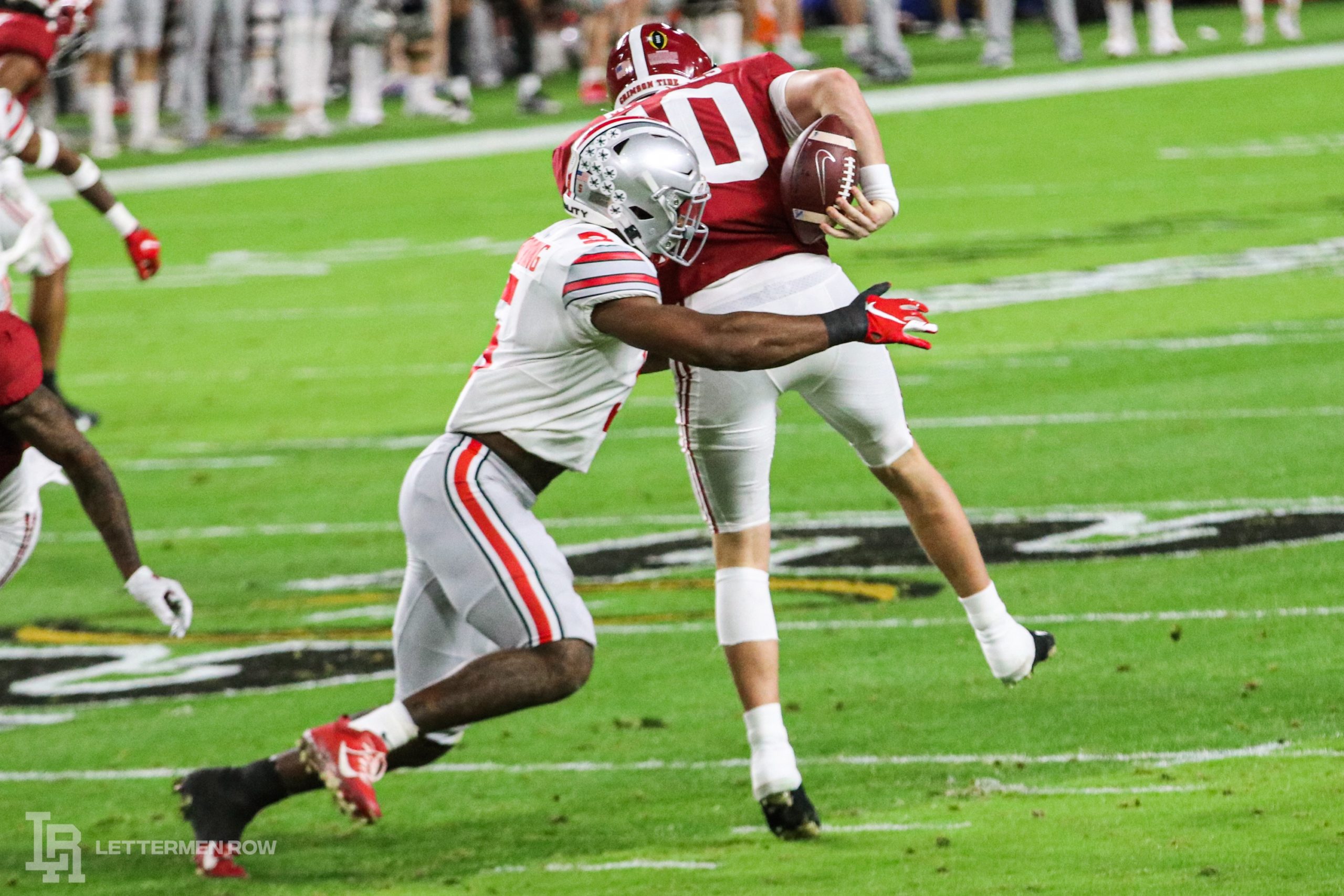 Ohio State was down 14-7 in the second quarter and seemed to be in danger of falling behind by two scores. But as Alabama quarterback Mac Jones dropped back to pass on a play-action call, Baron Browning sacked Jones, forced a fumble and recovered it to give the Buckeyes a possession that started in the red zone. Ohio State punched the ball into the end zone to cap off a short 19-yard drive just two plays later to tie the game and give the Buckeyes life. Browning’s disruptive play helped keep the Buckeyes in the game — for at least that moment. Browning’s best moments in the last two years have come as an edge rusher. The national title game was no different for the former five star. 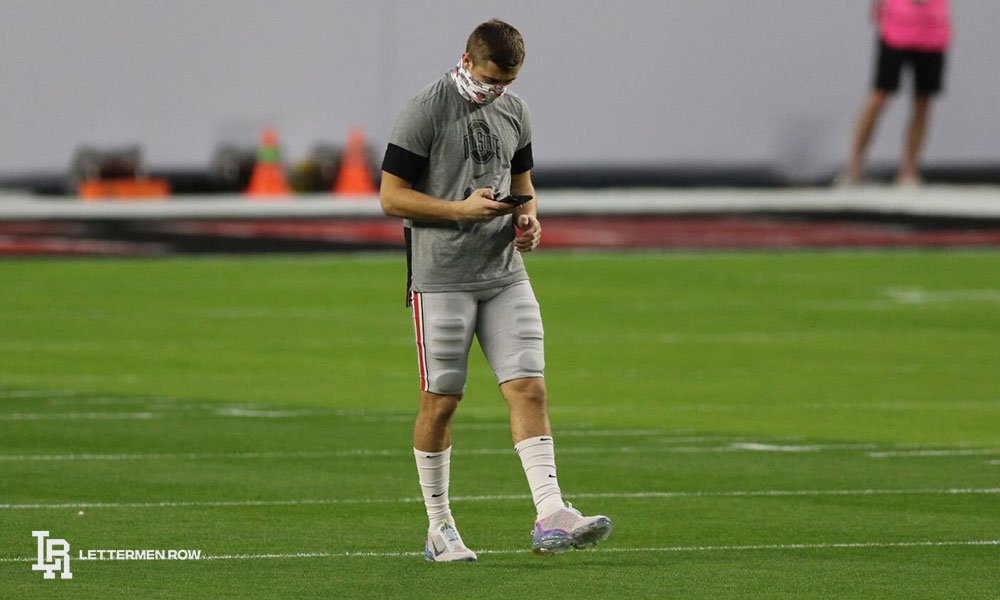 With Ohio State kickers Blake Haubeil and Dominic Dimaccio both out due to COVID-19 protocols, the Buckeyes had to turn to freshman kicker Jake Seibert to handle extra points and field goals. He got the job done. Seibert was perfect on his extra points, hitting all three of them, and he also made a short field goal to help the Buckeyes add points in the first half. He wasn’t needed in a crunch-time moment, but Seibert was perfect at his job in the national title game, proving the Ohio State kicking game is in good hands moving forward into next season.