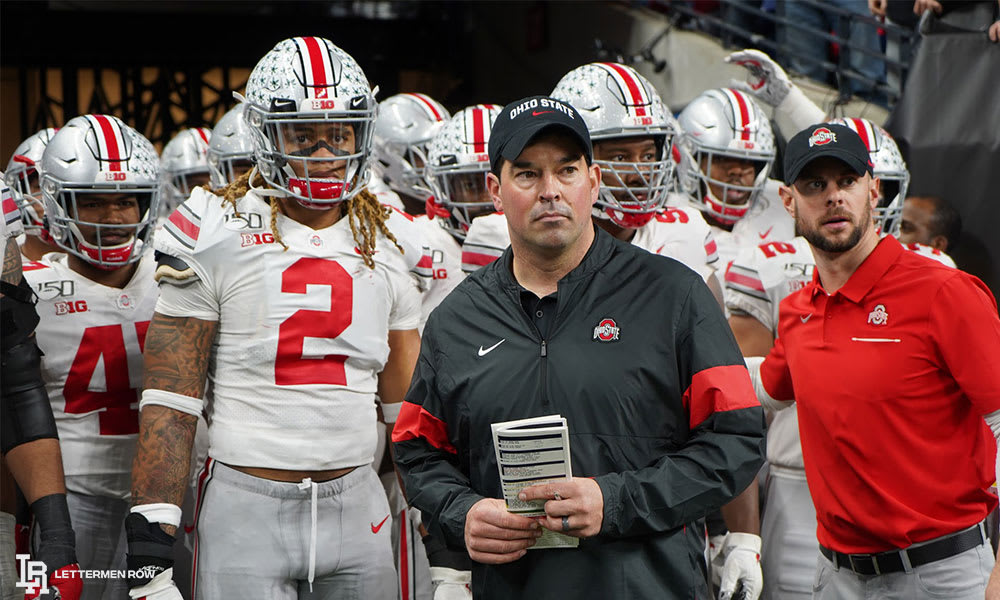 COLUMBUS — The big stage is nothing new for Ohio State.

But now the program is officially back on the grandest one of all.

The Buckeyes have obviously been no stranger to huge matchups and high stakes while winning top-1o matchups, claiming three consecutive Big Ten championships and winning the Cotton Bowl and the Rose Bowl since their last appearance in the College Football Playoff. But at least by comparison to Clemson heading into the Fiesta Bowl, Ohio State doesn’t have quite the same semifinal experience — which isn’t likely to matter given all the other trophies it has played for in recent years.

“The game hasn’t changed,” Buckeyes coach Ryan Day said. “It’s just being ready for that moment, and I thought we showed something in the second half [against Wisconsin] that we could overcome a game and just impose our will on teams. We have to carry that over into this game and show that we can do that and have enough confidence to do that against a team like Clemson.

“But really, our guys see ourselves as being the best in the country. The moment won’t be too big for our guys. It’s just a matter of keeping our emotions in check and just doing a good job of staying focused.”

The Buckeyes have plenty of time to prepare for that opportunity against Clemson in the desert. And as Ohio State starts that process, Lettermen Row is looking ahead with five questions for the program heading into a busy December stretch. 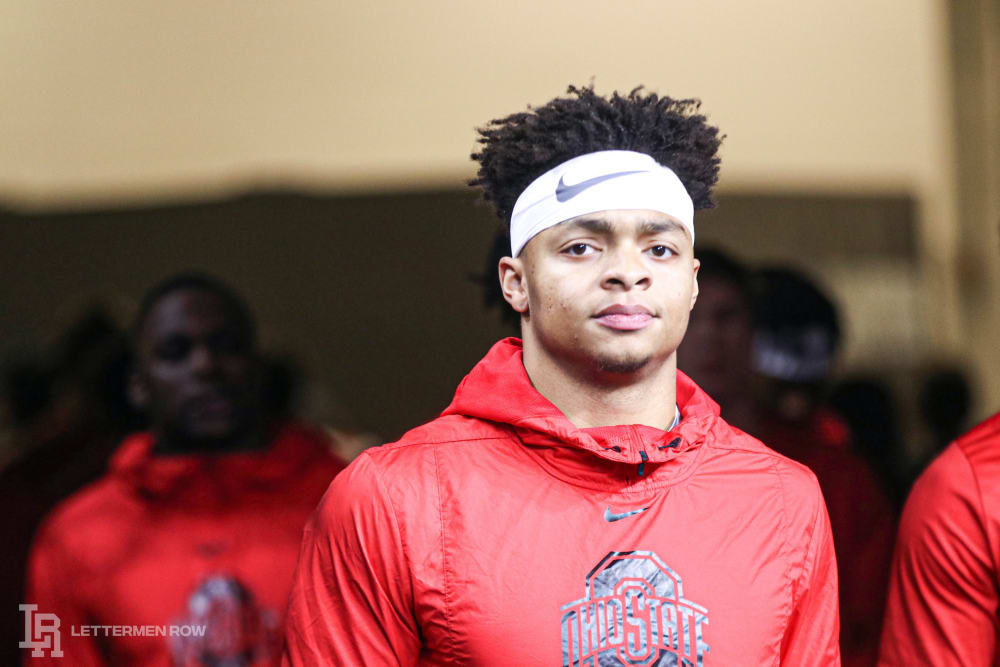 How much time does Justin Fields need to recover?

As close to the vest as the Buckeyes keep injury information, it’s hard to know exactly how severe the knee sprain for Justin Fields really is at this point. The sophomore quarterback has left no doubt about his legendary toughness, but he obviously wasn’t thrilled to be wearing a bulky brace on his left leg in the win over Wisconsin and admitted he wasn’t at full speed — even though he proved plenty effective while winning the Big Ten title game MVP award. During previous off dates for the Buckeyes, Fields has preferred to keep taking as many first-team reps as possible on the practice field. But he seemed to be aware that a little rest this week would be positive for him, and it will be interesting to see just how close to 100 percent he can be by kickoff on Dec. 28.

Who will represent Buckeyes at Heisman ceremony?

After capping his incredible first season as a starter for Ohio State with three more touchdown passes and having thrown only one interception all year, Fields has almost certainly earned an invitation to New York as a finalist for the Heisman Trophy. The looming question now is if voters have paid close enough attention to Chase Young while he’s been getting triple-team blocked and held every week to ignore the fact that he didn’t have a sack in the last two games. The junior defensive end is still the most dominant force in college football, and the Big Ten Silver Football winner would seem to have done enough to join Fields and LSU quarterback Joe Burrow at the ceremony on Saturday evening. 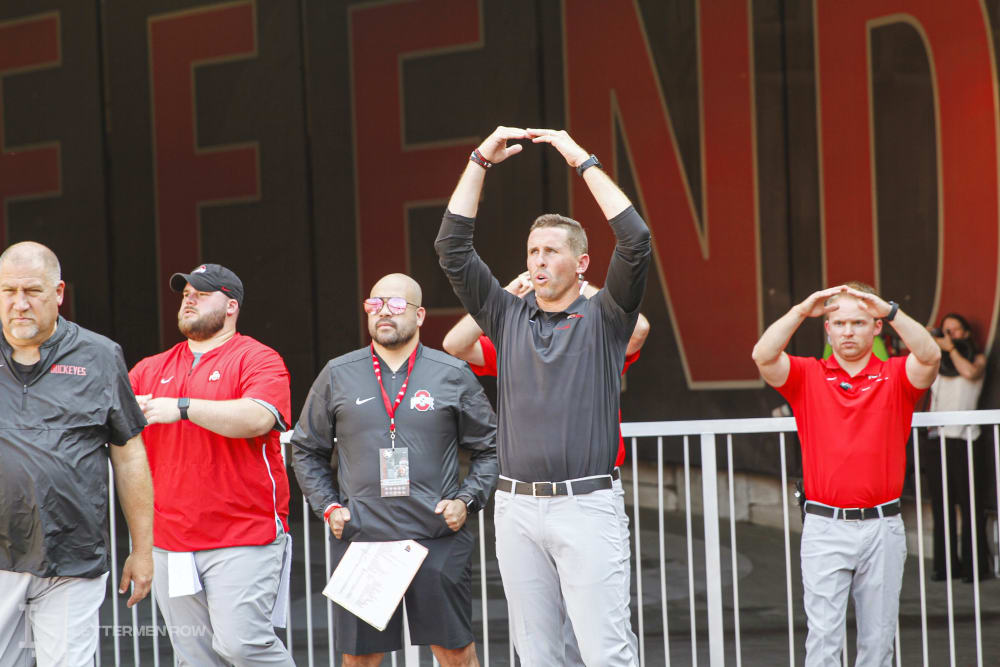 Ohio State wide receivers coach Brian Hartline will be in line for a raise to stay with the Buckeyes. (Birm/Lettermen Row)

Will Buckeyes lose any coaches this offseason?

Ryan Day wants his assistants to be performing at a high enough level that other programs want to hire them to be head coaches. The first-year boss for the Buckeyes doesn’t necessarily want a bunch of distractions during Fiesta Bowl preparations, but he’s been through this process before himself and is aware that it’s just a fact of life for elite teams at this time of year. So, the primary question then becomes what happens with Jeff Hafley as Boston College pursues him. Does Hafley make the leap after one season with the program and take his chances with that job — or is it better to wait like Day did after his debut year at Ohio State when Mississippi State came calling, betting that better offers would come down the road? Tony Alford has also been in the mix at Colorado State, and there might still be more dominoes that could fall to put Al Washington or Kevin Wilson in play elsewhere. Plus, wide receivers coach Brian Hartline is going to need a raise real soon to keep other schools from trying to pry him away.

What is status of Brendon White at this point?

Former Rose Bowl defensive MVP Brendon White was one of the most hyped Buckeyes on the roster throughout spring practice and the offseason as he appeared to be the top candidate for the new Bullet position. But after a season of struggling to get in the lineup while transitioning to a role that required more linebacker abilities than the safety skills he had used previously, White was not on the travel list for the Buckeyes last week at the Big Ten title game. Day cited personal reasons for White’s absence on Sunday, indicating there would be a conversation with the junior this week as the program tries to “get that figured out” moving forward.

There isn’t a lot of room left to be done with the Ohio State recruiting class, but this is a huge week for the coaching staff to jet around the country making visits after spending last weekend focused solely on winning another Big Ten crown and punching a ticket to the College Football Playoff. All eyes, though, should be on California quarterback C.J. Stroud ahead of his official visit with the Buckeyes, who are looking for a second player at that position to start preparing for the future — especially with Fields already looking like he won’t be around after the 2020 season. The Buckeyes have Jack Miller committed already, and they are considered the favorites for Stroud. If Day can land that tandem, Ohio State will be absolutely thrilled with the competition and depth on campus heading into next year.