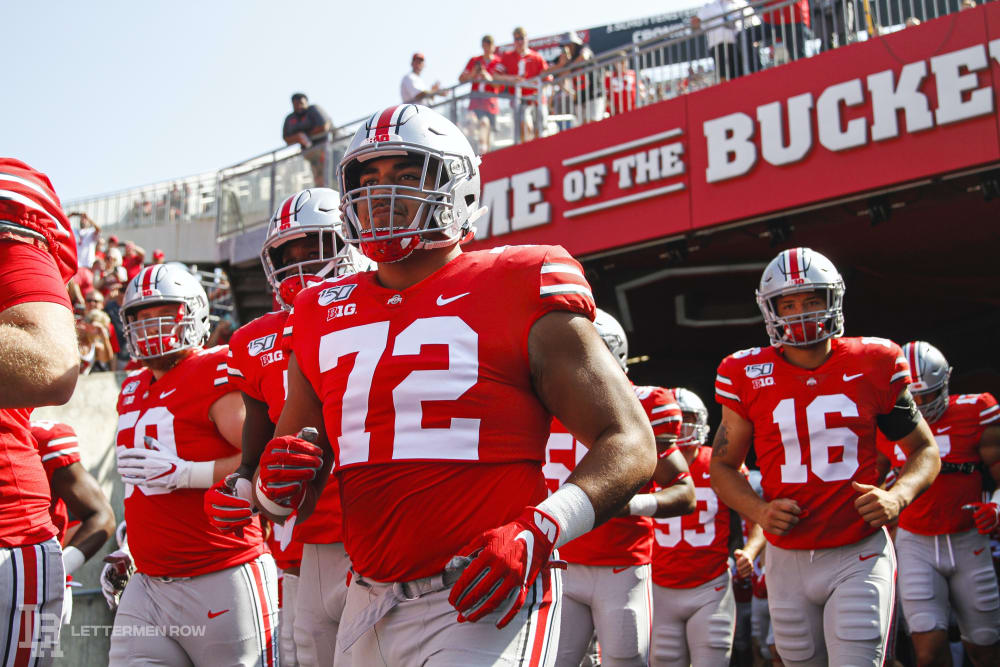 Ohio State is a double-digit favorite on Saturday at the Horseshoe against Wisconsin. (Birm/Lettermen Row)

COLUMBUS — Ohio State hasn’t had to completely empty the tank yet.

That, of course, is a benefit of blowing every opponent out so far for the Buckeyes. But it’s also at least a little bit annoying for a group of high-achieving players and coaches who want to be pushed in a competitive game and get a challenge.

Now, that doesn’t mean the rest of the opponents Ohio State has already dispatched weren’t capable of that. But none of them so far have achieved what Wisconsin has even with one loss on its resumé, and that has clearly earned the attention of the Buckeyes as they gear up for a fight on Saturday at the Horseshoe.

“We have a special group of guys that can be great,” Ohio State coach Ryan Day said. “Again, it doesn’t mean anything if we don’t perform week in and week out. We have a huge challenge this week. It’s going to be tough, hard. These guys are physical. We’re going to have to bring it in every single way. If we just stay focused on that, all those things are going to come down the road we can look back on.

“I mean, you cannot let one get away. This is going to be as hard as it gets. These guys are coming off a tough loss, they’re going to be more hungry than ever coming in here. I read a few of the articles saying they have something to prove more and more as we get closer to this game. It’s going to take everything we have to win this thing.”

The Buckeyes have adapted that mindset in every game so far anyway, and that obviously hasn’t really been the case. Once again, Ohio State is a double-digit favorite and widely expected to extend the winning streak this weekend against the Badgers — with the entire Lettermen Row crew again picking a victory as well. So, beyond the score, what’s going to happen as Ohio State takes on Wisconsin? Here are the Five Bold Predictions from our staff.

Quite simply, the turnaround of the Ohio State defense as a whole has been simply remarkable. But that resurgence has been primarily driven by the improvement stuffing the rush, which will certainly be put to the test by Wisconsin. Thanks to the attention to details, the fundamentally-sound tackling and the relentless energy the Buckeyes have been playing with so far, there’s no reason to expect they’ll be going backwards even with Taylor bringing an impressive reputation and physical offensive line with him to the Horseshoe. The Buckeyes have famously shut down Heisman Trophy candidates in recent years and refused to let those guys beat them, and this will be no exception. Wisconsin will have to throw the football if it’s going to spring the upset — and that’s also a tall order against the “Best in America” secondary.

The rain is coming to Columbus and so is a wounded group of Badgers who will no doubt have one goal in mind: make Justin Fields win the game for Ohio State by forcing him to throw the football in less-than-ideal conditions.When times get tough for Buckeyes quarterbacks, K.J. Hill has been the answer more often than not in the last three years and he’s going to be the solution on Saturday against Wisconsin. Look for Hill to emerge as the safety valve/security blanket as he sits in zones and proves difficult to guard as the hot receiver when Wisconsin tries to pressure Fields into mistakes.K.J. Hill will lead the Buckeyes on Saturday. 100-plus yards and three scores. Book it. 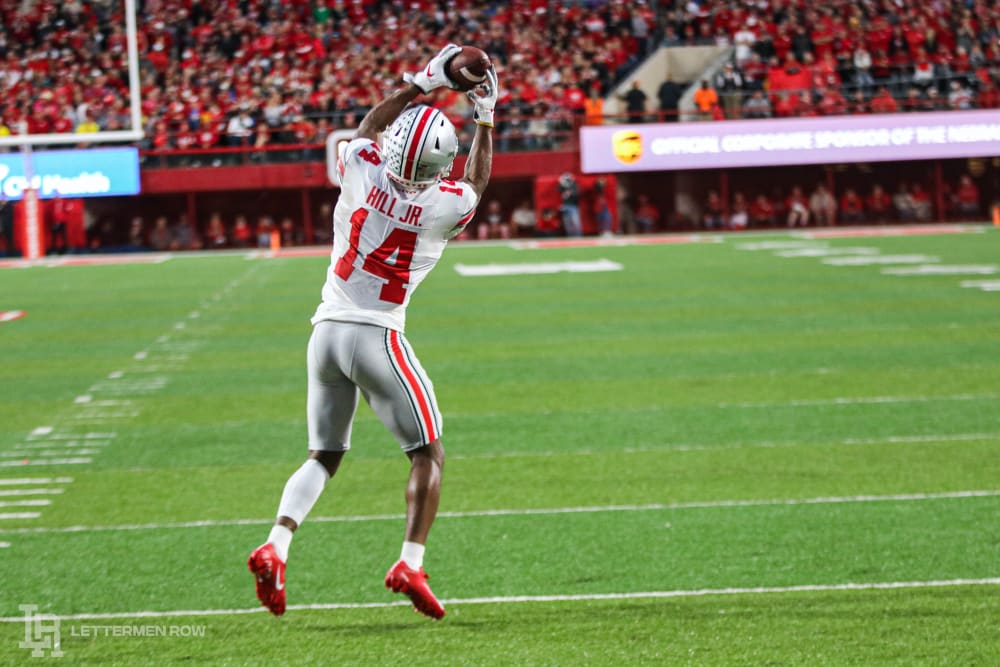 Ohio State wide receiver K.J. Hill has some records in his sights for the Buckeyes. (Birm/Lettermen Row)

All week the talk has centered on the Ohio State defense and how it’s going to handle the Wisconsin offensive line and its celebrated running back Jonathan Taylor. Short shrift has been made about how the Badgers might handle the Ohio State line and its increasingly productive back J.K. Dobbins. Check the stats: OSU is third nationally in rushing (287.1-yard avg.); Dobbins is fourth individually (947). Wisconsin is No. 17 as a team (235.4); Taylor is third (957). So, it’s the Ohio State rushing offense, that includes quarterback Justin Fields and relief blaster Master Teague, that’s going in with a chip on it shoulder pads. It says here the Buckeyes will hold sway. “[Strength coach] Mick [Marotti] said it the other day, any time you go into a game, you have a one-on-one battle you have to win,” Buckeyes coach Ryan Day said Thursday. “I think our guys are looking hard at that.”

If Northwestern’s long snapper knew how to get the ball to the punter, Ohio State would have blocked a kick last week. Instead, the poor punter had to dive on the ball. The Buckeyes seem to have blocking punts down to a science and have clearly improved under new special teams coordinator Matt Barnes. They have already blocked two this season and should have had a couple more. I don’t think Wisconsin will have much success with Jack Coan against this Ohio State defense, meaning the Badgers will likely punt more than five times. One of those is going to be blocked, and it might even lead to a special teams touchdown. 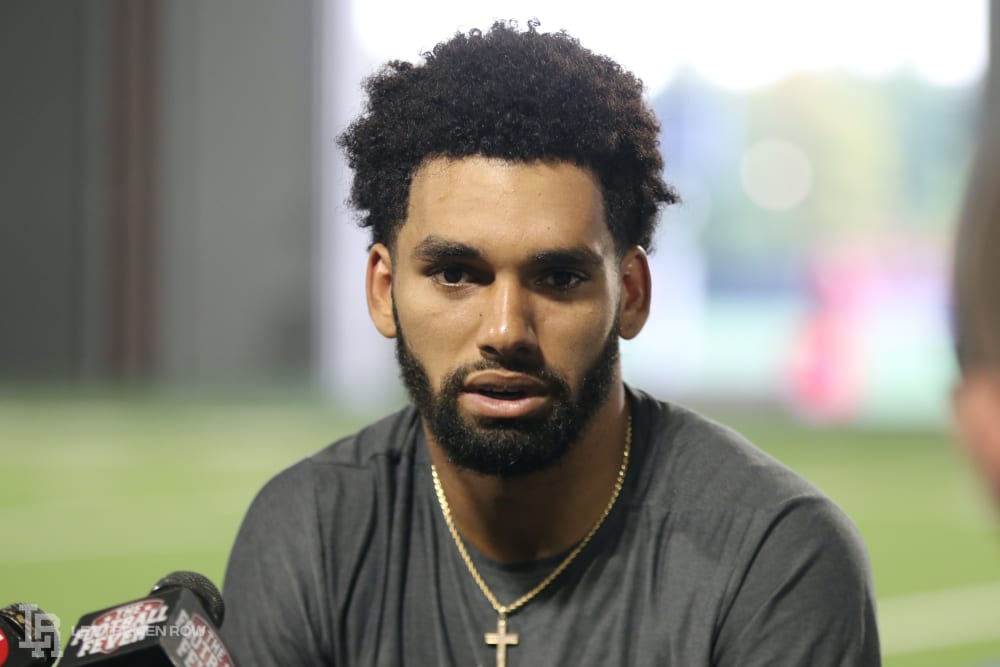 Will Crall: Ohio State will keep Jonathan Taylor in check

The Ohio State defense will hold Wisconsin running back Jonathan Taylor under 100-yards rushing. Taylor has been one of the nation’s best rushers through the first half of the season, averaging 136 yards per game. But I think that Ohio State’s interior defensive line will have a big day led by guys like Jashon Cornell, Davon Hamilton and Robert Landers. I believe that a quality opponent like Wisconsin will bring out the best in the Ohio State defense — and the Silver Bullets will assert themselves as the best defense in the nation after this game.