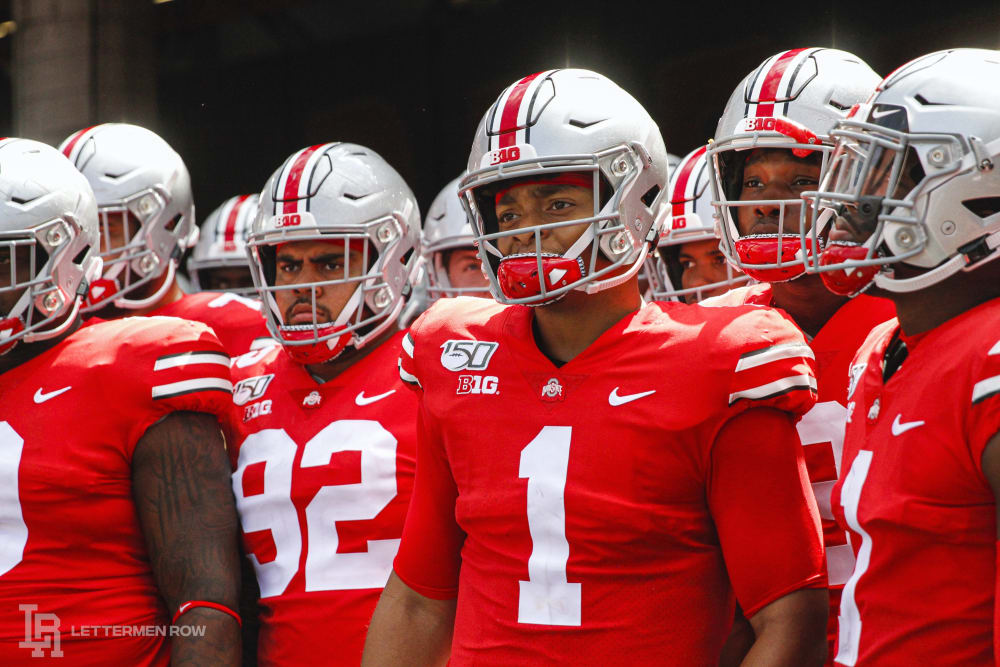 Ohio State and quarterback Justin Fields are heading on the road for the first time this season. (Birm/Lettermen Row)

COLUMBUS — Ohio State is right where it expected to be after two weeks.

There may still be issues that first-year coach Ryan Day wants corrected, but it’s pretty hard to find much to worry about for the Buckeyes after a couple easy wins — and on the heels of a dominant shutout over a respectable opponent.

But Ohio State is striving to be a national-championship caliber program this year. So, Day will keep working to squeeze more out of quarterback Justin Fields, looking to keep the momentum rolling on defense and now trying to get a feel for how his team performs on the road as Big Ten play opens at Indiana.

“The seasoned coach or the veteran player can identify [problems], be critical of themselves,” Day said. “If you’re worried about the process as opposed to the result, you’re going to be more focused on that. Just keep hammering away. As much as you say it, some of the younger guys don’t quite get that. The older guys I think do. We’re going to keep swinging as hard as we can to make sure they know what it is.

” … You have to make sure that as a team we know how to run the ball, take care of the football, we’ve got to stop the run, then we got to play with toughness. That’s how you win on the road.”

The Buckeyes are again double-digit favorites to come out on top. And as Lettermen Row does every week, the staff is going beyond the final score with Five Bold Predictions about what will happen on Saturday against the Hoosiers. 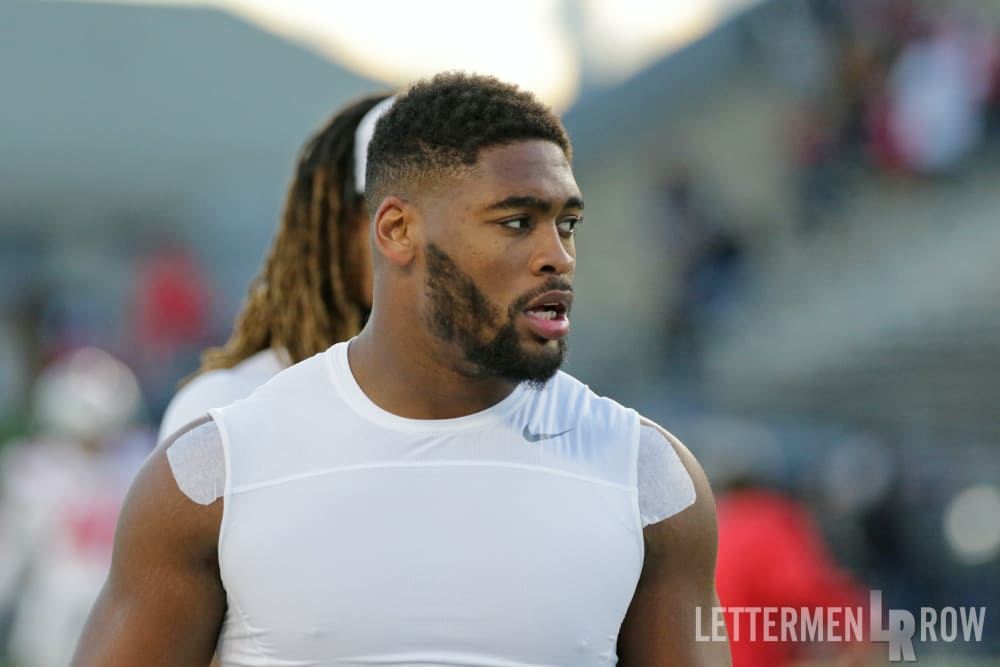 Ohio State defensive end Jonathon Cooper has been out for the first two game with an ankle injury. (Birm/Lettermen Row)

The Buckeyes have survived just fine through two games without their senior captain on the defensive line, but they appear to be poised for a boost from the return of Jonathon Cooper from his high-ankle sprain. Always good-natured anyway, Cooper’s smile has been even bigger around the practice facility this week since he appeared ready to get back on the field and show what he’s been building for all offseason. Ohio State doesn’t have to push it with Cooper. But there are only a certain number of games left in his career, and he won’t want to waste any more chances to put on the uniform and get after the quarterback. Expect to see Cooper back in action — and in the Indiana backfield.

(Editor’s note: Some predictions are just too hot to even make it to game day, and Cooper was ruled out on Friday morning. Given a mulligan, Austin Ward is going with a five-touchdown performance from Justin Fields. The Ohio State quarterback is gaining confidence and comfort every week, zipping through the learning curve and unleashing his dual-threat ability. The Hoosiers won’t have an answer for what Fields can do with his arms and mobility.)

Tim May: Davon Hamilton will be disruptive force for Ohio State

Defensive disruption doesn’t always show up as a statistic. Sometimes it must simply be observed. Take the case of Ohio State defensive tackle Davon Hamilton. Most of the time at the nose position, periodically at the three-technique, the 315-pound fifth-year senior has been making waves in the midst of the trench so far this season. After blooming midway through last season, at times he’s become a double-team chore for opponents, helping fray the edges for defensive end Chase Young and his cohorts. Expect to see the same dynamic on Saturday when the Buckeyes travel to Indiana to begin defense of their two-year reign as Big Ten champions. Hamilton’s credit for a mere three-tackle participation through the first two games don’t tell the whole story. He has become an A-gap attacker.

Ohio State’s defense has been dominant through two games. But the Buckeyes have only forced three turnovers. Hoosiers freshman quarterback Michael Penix threw two interceptions in the season-opening win over Ball State, and last time I checked, Ohio State has a better secondary than Ball State. On top of that Penix is now a game-time decision due to injury, which could add to the challenge for the Hoosiers. The Buckeyes will find a way to create turnovers like they did in training camp on their way to a blowout win. Three turnovers shouldn’t be a tough ask for the Silver Bullets. 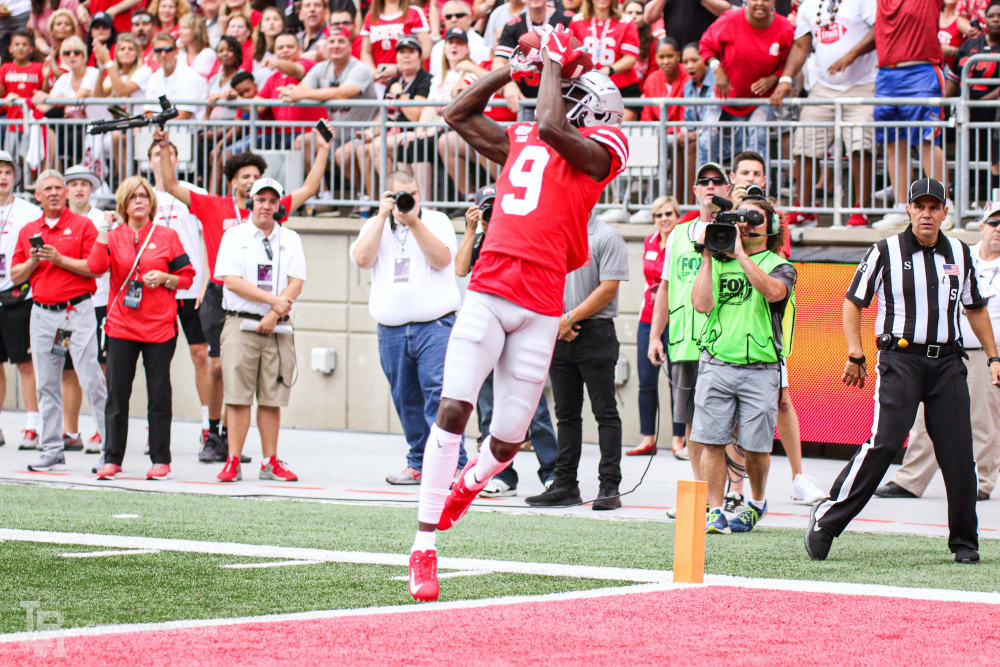 It’s been a tumultuous few years for Binjimen Victor. But the senior receiver has looked the part for Ohio State in its first two games, and this weekend those efforts will pay off with his first two-touchdown outing of the season. Victor has been inconsistent throughout his career, but as his proverbial light comes on, so do his opportunities to be a difference-maker in the Buckeyes offense. He’s become a security blanket early for Justin Fields, and against Indiana, that will turn into a deep-threat weapon for Ohio State.

Before I tell you why the Ohio State defense will deliver a shutout for a second week in a row, let me apologize for last week’s prediction. I projected the tight ends would have a big outing against Cincinnati — they had zero receptions. I know better than to predict catches and touchdowns from Ohio State tight ends, and I’ll do better.

As for the defense, I think it will post the first back-to-back shutout since 2009, because the Buckeyes are finally playing with the confidence they lacked last season. Chase Young’s play speaks for itself. But look at some of the other young lineman who are stepping up. Tyreke Smith, Tyler Friday and Zach Harrison all look great. The defensive backs including Jeffrey Okudah, Damon Arnette and Jordan Fuller all look like NFL players under Jeff Hafley. Indiana’s starting quarterback Mike Penix is a game time decision, but it doesn’t matter if he plays or not. Ohio State’s defense rolls.