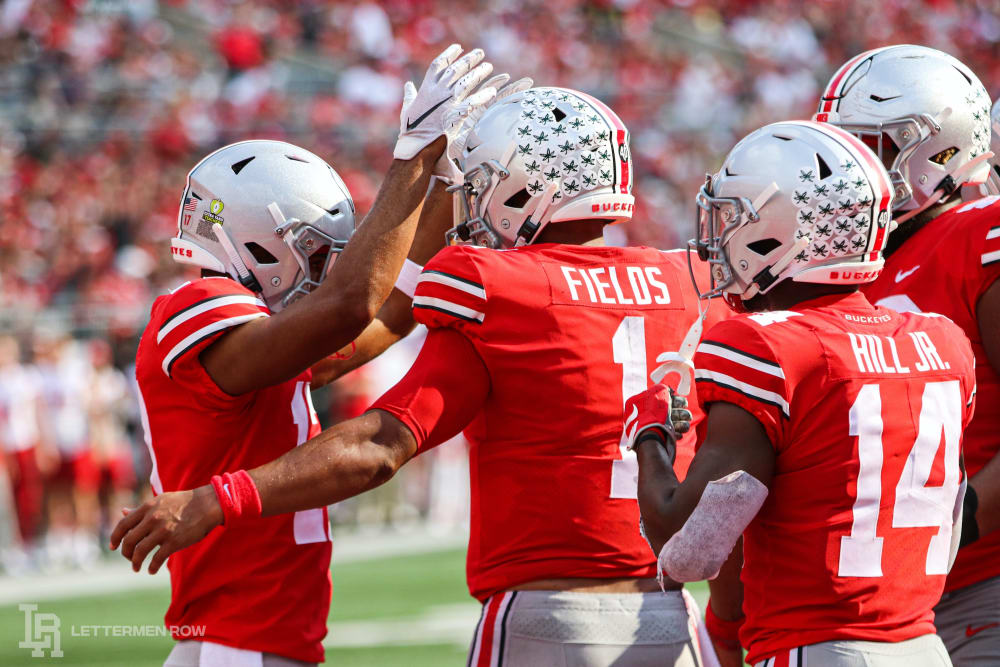 Ohio State and quarterback Justin Fields had plenty to celebrate in the rout of Miami. (Birm/Lettermen Row)

COLUMBUS — There might not be anything more terrifying than Ohio State with a full head of steam.

Maybe the Buckeyes could have built it up a little quicker on Saturday afternoon at the Horseshoe. But if they slightly overslept the alarm against Miami (Ohio), it certainly didn’t take them long to come to life and make up for it with another dominant display.

Yes, Ohio State was always supposed to cruise against a ridiculously overmatched opponent. But that shouldn’t diminish the complete effort in all three phases that followed a strange few minutes to open the game, with the No. 6 team in the country unleashing a barrage after that which few teams in the country can match.

In the end, the final score doesn’t really matter after building a 49-5 lead at intermission. And with Ohio State having an opportunity to empty the bench early against Miami, Lettermen Row isn’t waiting for the final gun either to start breaking down the latest win for Ryan Day and his program.

If there was any concern about his passing ability following one somewhat inconsistent outing last week, Fields did his best to erase them all against Miami. The sophomore quarterback throws gorgeous deep balls down the field, he’s able to make accurate throws on the move and it’s becoming more clear every week that he’s developing rapport with a dangerous cast of wide receivers — particularly Chris Olave. Ohio State is going to face far tougher defenses than the RedHawks threw at him, but they had chances to slow him down that Fields was able to avoid with remarkable elusiveness in the pocket. After accounting for six more touchdowns in the first half, he’s firmly establishing himself as a Heisman Trophy contender. 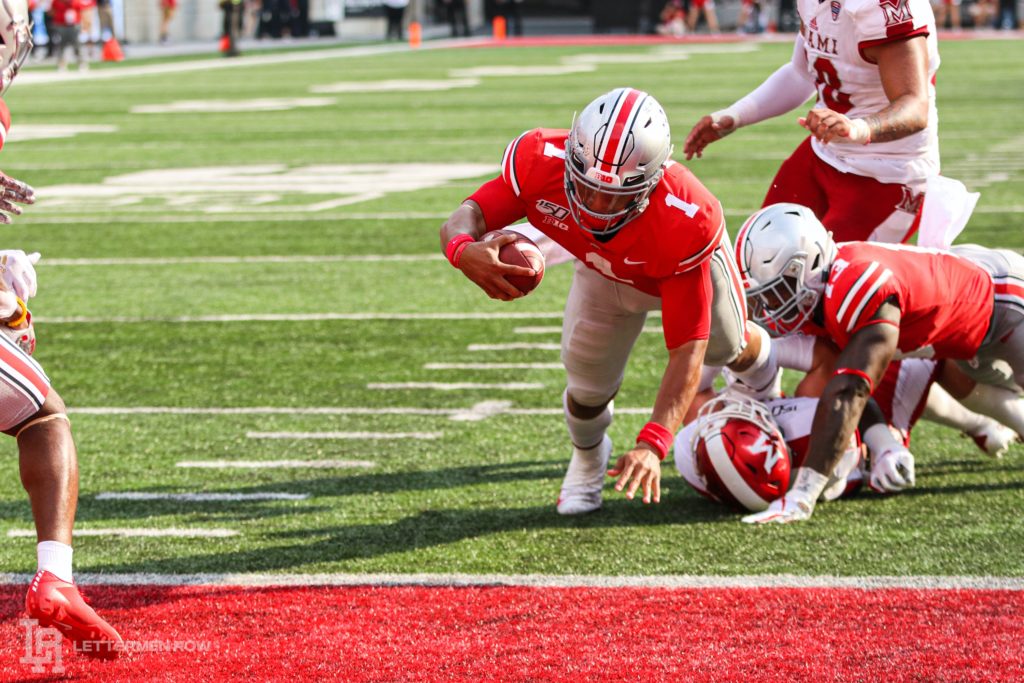 Chase Young is a superstar, that was already well documented before he utterly dominated the Miami offensive line and forced fumbles on a pair of first-half sacks. But the Ohio State defensive end isn’t working alone, and he’s got plenty of company racking up tackles for loss and taking down opposing quarterbacks. The Buckeyes had eight different players make a play in the backfield before the third quarter even started, and Baron Browning turned in one of his most impressive outings with two of them as he flew around the field at linebacker. Again, Ohio State is going to play a much better offensive team in Nebraska next week — but the talent is undeniable for the Silver Bullets.

The cutting-edge addition to the Ohio State attack is actually a throwback. And after a handful of years facing questions about why the Buckeyes wouldn’t simply line up a big, athletic quarterback and plow him into the line to convert a short-yardage situation into a first down, Day unveiled one with Fields on Saturday. The reasons the Buckeyes have played it safe with their passers or continued to leave the options open for bigger plays by forcing defenses to cover the entire field always made sense. But sometimes the simple, straight-ahead approach is a fine way to get the job done — and it’s another addition to the expanding under-center package for the Ohio State offense.

In the end, it wasn’t much of a gamble for Ohio State to err on the side of caution with a couple key guys battling injuries. Could Jonathon Cooper, Robert Landers, C.J. Saunders or maybe even Tyreke Smith have played for the Buckeyes if needed on Saturday? All of them probably could have gone, starting with the senior captain Cooper who has been on the brink of a return for the last two weeks. But Ohio State knew it had a dramatic edge in talent and wouldn’t need the full complement of players to survive against Miami, and that means it could be in line for a major boost next week at Nebraska.