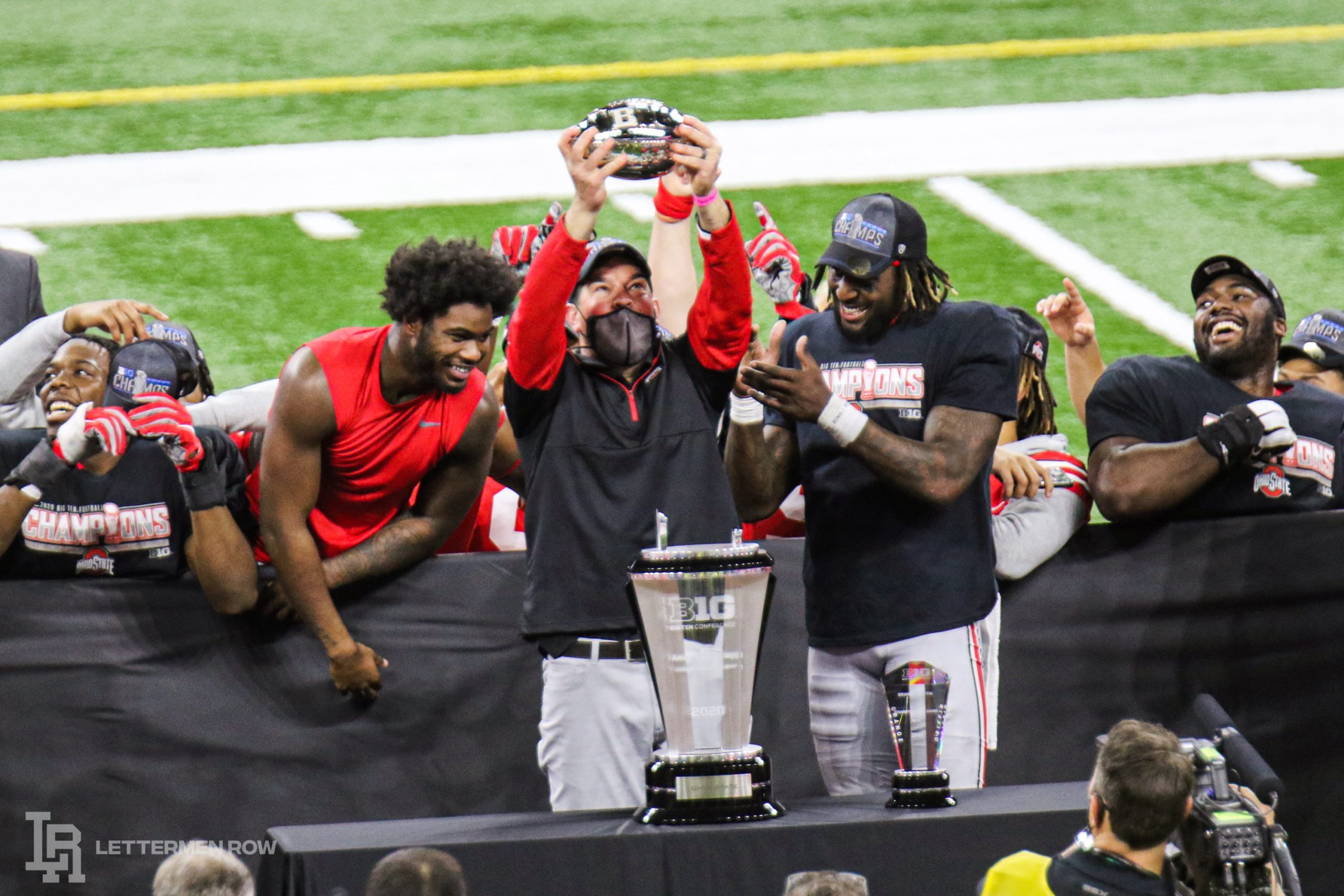 Now the Buckeyes have earned the right to chase a second.

Nothing about this season has been perfect, of course, and the program is just as unhappy as anybody else that it didn’t get more chances to prove itself on the field this year. But the Buckeyes check every box for a College Football Playoff participant: They’re undefeated, they’ve passed the mythical eye test — and they won a conference title on Saturday with a 22-10 win over Northwestern at Lucas Oil Stadium.

The latest victory certainly wasn’t a work of art. But that’s been a running theme during this incredibly challenging year.

“And I tell you what, this is one of my favorite teams that I have ever been around. And maybe not because of what’s going on all the time on the field, but more importantly just that this team is so tough. They’ve been through so much, and they just don’t flinch. And I cannot give this team enough credit. And I’ll say this: If we had to play one game against anybody in the country, I’ll take the Ohio State Buckeyes.”

The Buckeyes are actually aiming to play twice more in the postseason. And after claiming another Big Ten trophy in the Big Ten title game, Lettermen Row is breaking down what we learned from another successful trip to Indy for Ohio State. 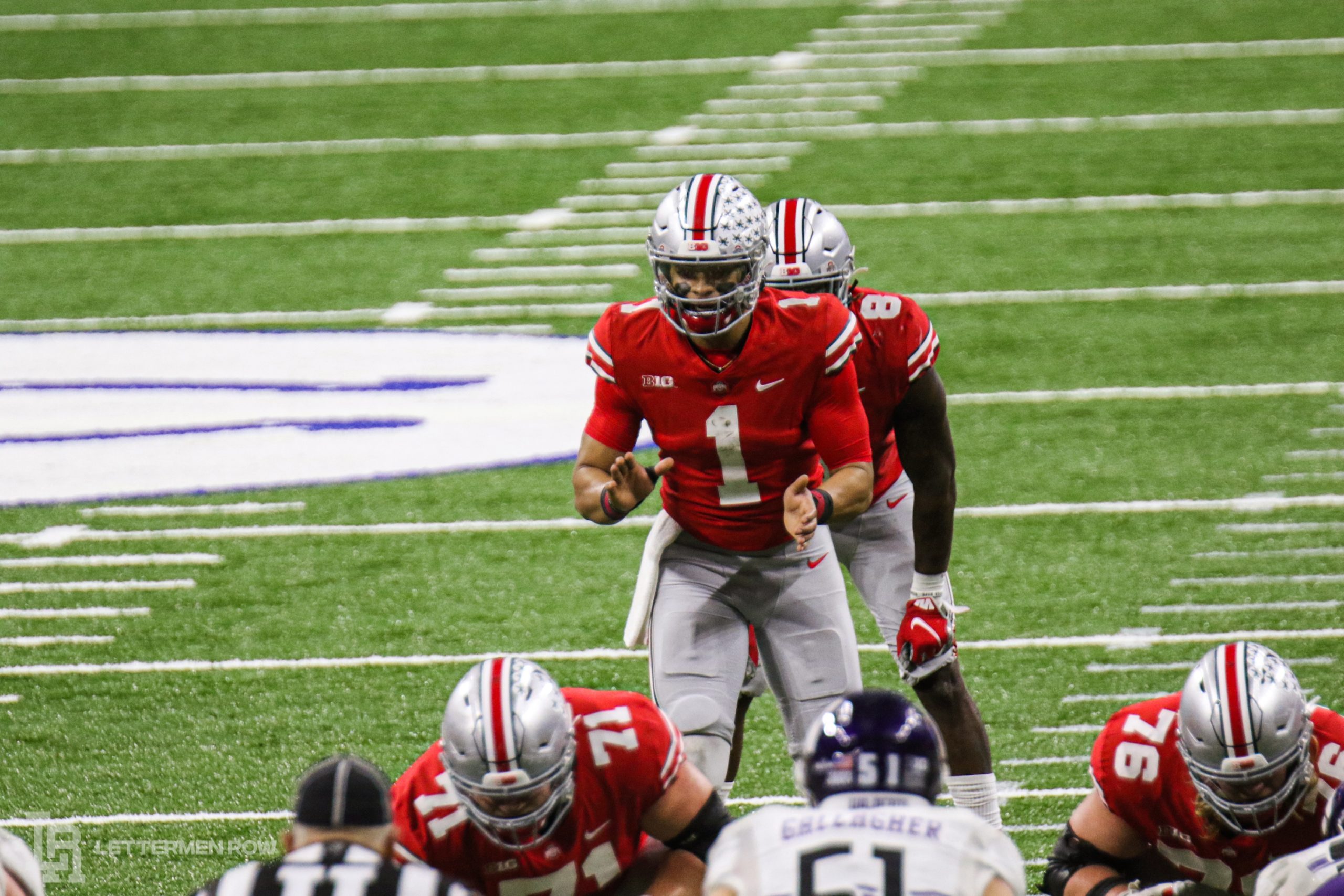 Justin Fields put the blame solely on his shoulders. The Ohio State quarterback could have easily blamed the absence of his security-blanket receiver, made a bigger deal of his thumb injury or even just tipped his hat to a tenacious Northwestern defense. Instead, though, the captain kept the focus on himself and stressed that he simply must play better leading the attack if the Buckeyes are going to win a national championship.

Clearly those factors contributed to what was undoubtedly the worst performance of his career with the Buckeyes. But it’s also quite uncharacteristic for Fields to complete just 12 of 27 throws with a couple interceptions, and there is plenty of evidence that suggests he’ll be able to bounce back to give Ohio State what it needs in the passing game. Of course, Fields never backs down from challenges, and he’ll be supremely motivated to prove what he can do on another big stage.

The hard-hitting, ball-hawking safety isn’t always perfect, and the aggressiveness of Josh Proctor surely is part of the reason Ohio State has been hesitant to make him the full-time deep safety. But the Buckeyes had no choice but to turn him loose against Northwestern, and the junior responded with a critical interception and four tackles to help the unit overcome the absence of starter Marcus Hooker and two other safeties on Saturday. Proctor’s ability to play in coverage has allowed Ohio State to move him around in the secondary, and it would probably prefer to keep tapping into his versatility rather than lock him into one role. But if he’s allowed to get more comfortable in that role and doesn’t ever come off the field, it’s clear that Proctor can be a game-changer for the Buckeyes. 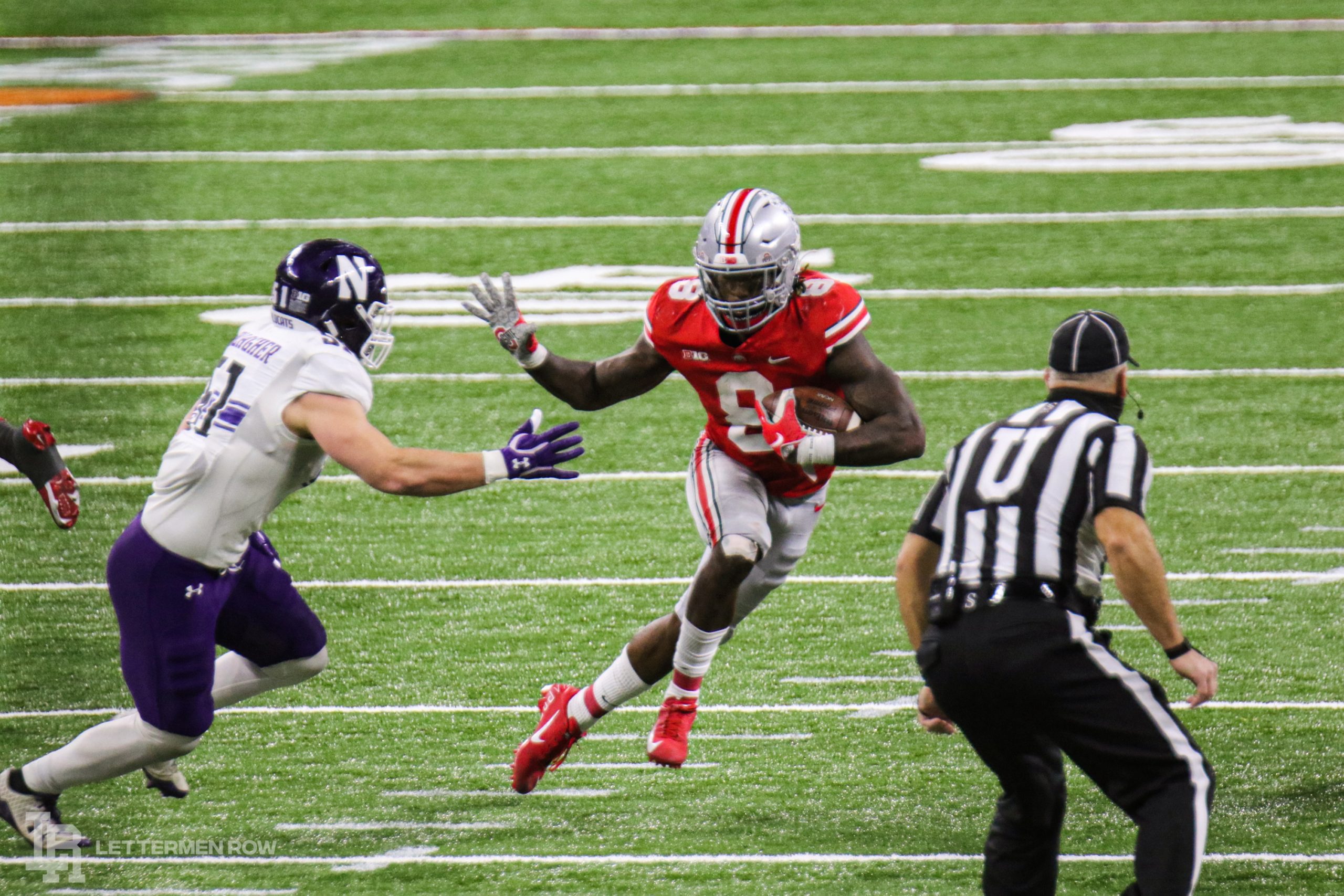 Ohio State tailback Trey Sermon was a beast for the Buckeyes. (Birm/Lettermen Row)

The schedule shuffling kept Trey Sermon from making the kind of early impact he or the Buckeyes expected after his high-profile transfer. The former Oklahoma running back was coming off an injury, was still adjusting to a new offense and wasn’t getting a chance to build much momentum when games were getting cancelled or the coaching staff was rotating rushers. But there can be no doubt whatsoever that the version of Sermon that was promised has arrived now, and his record-breaking performance in the Big Ten title game will only make preparing for the Buckeyes in the playoff tougher for somebody like Clemson. If more resources have to be devoted to slowing down Sermon, a healthy Fields will have more room to operate with either his arm or legs. Sermon’s emergence has come at exactly the right moment for the Buckeyes.

Next Man Up approach is legit at Ohio State

The Buckeyes obviously don’t have a trademark on the well-work coaching cliché about not making excuses and relying simply on the Next Man Up. But few programs actually live it like Ohio State, which continues to keep rolling despite having to piece together lineups on the fly. On Saturday the Buckeyes had to replace a superstar receiver, and Julian Fleming came off the bench to provide a spark. They lost a playmaking linebacker, and Justin Hilliard produced the game of his life. The secondary was down three safeties and Proctor grabbed a critical pick.

Even the coaching staff was tested again with Al Washington and Brian Hartline at home. Ohio State just trusted Michael Cibene to step up to a more prominent role with the linebackers while Keenan Bailey worked with a second unit in as many games to steer the wide receivers. The standards never change at Ohio State, and everybody knows what’s expected as soon as the opportunity to contribute arrives.

Ohio State didn’t want to devote any attention to the potential tweaks needed to the COVID protocol to remain on a level playing field in the College Football Playoff until it actually won the Big Ten. Similarly, it wasn’t going to address the clear problem with the Rose Bowl hosting a semifinal when families wouldn’t be allowed to attend until that became a potential destination.

They won’t have to push for a change out of California after Dallas confirmed as a new semifinal host on Saturday night. But the Big Ten and Ohio State will still need to have a conversation about the testing and return-to-play plans, and it appears that the league and its four-time-defending champion are on the same page. Conference commissioner Kevin Warren briefly acknowledged that possibility in a conversation with Lettermen Row on Friday, and Ohio State athletic director Gene Smith is expected to engage with him and the decision-makers early this week about dropping the 21-day rule down to at least 17 after the CDC lowered its recommended isolation time late last month.