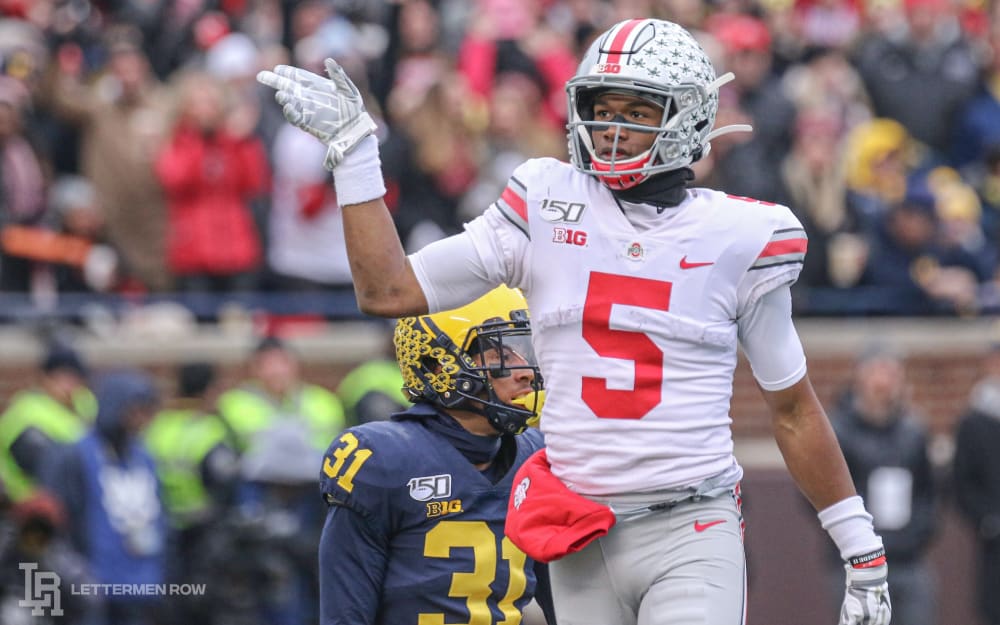 COLUMBUS — An exhausted, relieved Ryan Day sat down at a table after his first rivalry win at Ohio State, and it didn’t take long to figure out just how little thought he had put into the Big Ten title game.

In case anybody was wondering if the first-year coach of the Buckeyes might look past Michigan knowing that his team would have a conference title opportunity and a potential spot in the College Football Playoff up for grabs no matter what happened on Saturday, Day admitted he didn’t know what time the West Division title game was even going to start.

And the eventual winner wasn’t going to make a difference for his approach, either.

Ohio State was locked in solely on the Wolverines on Saturday, and then they were going to enjoy the latest evisceration of the hosts in the Big House on the bus ride home after the 56-27 win. And once that entire process was complete, Wisconsin is about the get the exact same treatment before the matchup on Saturday night in Indianapolis.

“I think we’ve done a good job of staying [focused] on one week at a time,” Day said. “And it’s even one day at a time, because if you start to think too far ahead, you get yourself jammed up. .. The focus had just been on this game and making sure that we were ready to go, now we’ll figure out what’s next.

The results speak for themselves for the unbeaten, top-ranked Buckeyes as they look to claim a third consecutive conference championship. And as the week of preparation kicks off, Lettermen Row is setting the table as always with Five Questions for Ohio State before the rematch with Wisconsin. 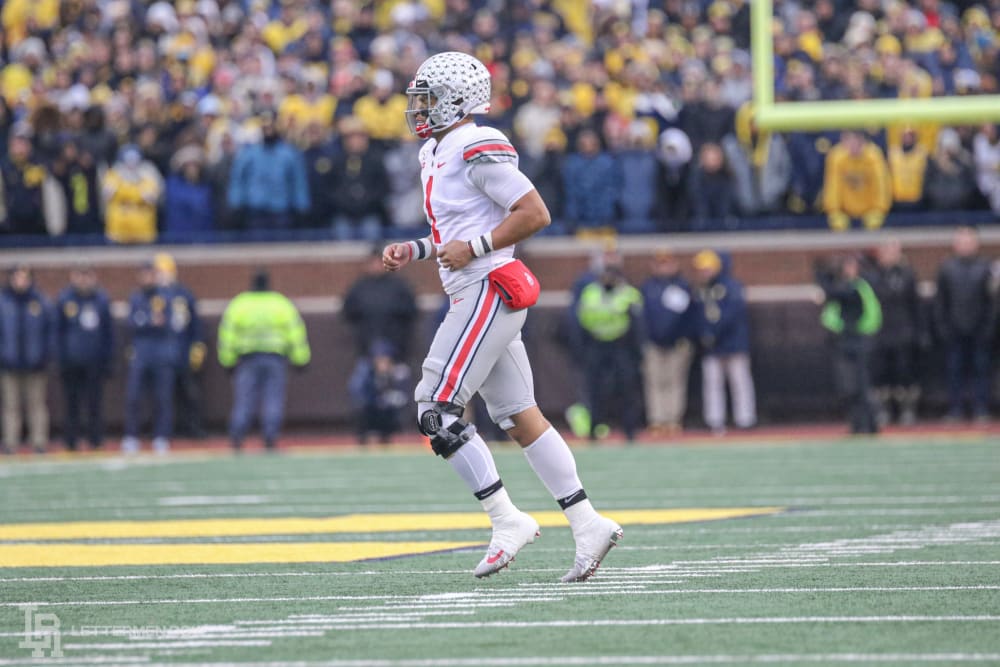 How much will knee issue slow Justin Fields?

There hasn’t been any doubting the toughness for Justin Fields for months since the first-year starting quarterback wasted little time at Ohio State establishing himself as one of the most resilient, competitive guys on the roster. So, there’s no question that Fields will be out there on Saturday night at Wisconsin, just like he was last week at Michigan after becoming an instant legend by popping out of the medical tent to promptly throw a touchdown pass. Fields is dealing with a sprained ligament in his left knee that requires a bulkier brace than he prefers, and that does appear to be scaling back his explosive rushing ability a bit. It’s unlikely that he’ll be able to get back to full strength by kickoff, but it will bear monitoring to see just how close he can get.

What does Chase Young have in store for Wisconsin?

The last time Chase Young saw one of the most respected offensive lines in the country, he torched them for four sacks that officially stamped his Heisman Trophy candidacy as legitimate. Can Wisconsin adjust with a rare second crack at the Buckeyes? Odds are the Badgers are going to have their hands full, because Young will no doubt be even more fired up after being held without a sack last week against Michigan. The superstar junior saw more double- and triple-team blocks than he has all season, finishing with just a pair of quarterback hurries on the stats sheet. And while that still doesn’t quite tell the complete story of his impact on the win, Young will be motivated not to let that happen again. 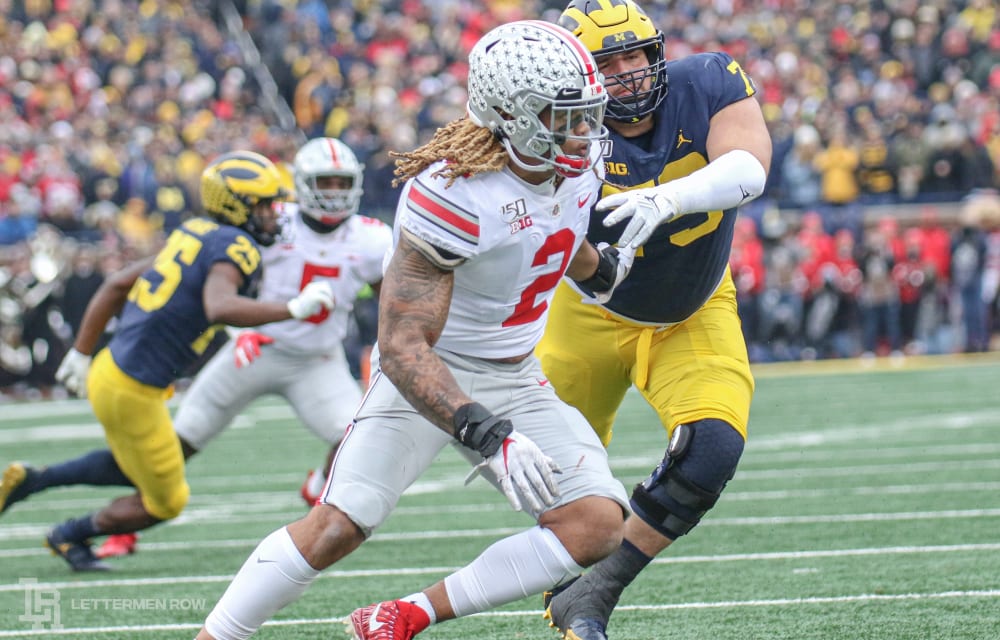 Ohio State defensive end Chase Young made an impact against Michigan without having a sack. (Birm/Lettermen Row)

Will Shaun Wade be back for Ohio State?

After going through warmups and dressing for The Game, it looked like a sure bet that Shaun Wade would get the go-ahead to play after entering the weekend as a game-time decision at Michigan. The green light didn’t come for the redshirt sophomore, and the Ohio State defense sure missed him during a rocky first half. Given the versatility that allows him to play essentially anywhere in the secondary, Wade has been one of the most important pieces of the remarkable turnaround for the Silver Bullets this season. And while Wisconsin has a relatively limited passing attack, Wade can also help against the run and would be a huge boost overall for Ohio State as it tries to match the dominant work it delivered in the first meeting back in October.

Does rematch factor hurt Ohio State at all?

Yes, Wisconsin will want revenge after yet another blowout loss at the hands of the Buckeyes. But motivation isn’t going to be a factor for either side in a championship game, and the Badgers getting picked apart in the Horseshoe in October is really just a reminder that they simply don’t have the same personnel as Ohio State. Drawing on his professional experience, Ryan Day has already compared the second meeting to what happens all the time in the NFL when division opponents play twice every season. Ohio State has multiple coaches on the staff who have been through that process before, and they won’t be caught off guard by having to come up with a new (or tweaked) game plan for a previous opponent. Talent is usually what matters more than any kind of motivational ploy, and the Buckeyes have the clear edge there.

Which Heisman case will get strongest closing argument?

Chase Young has already done some special work against the Badgers, and the defensive end might need a similar outing to solidify his invitation to New York. After adding to his insane statistics and delivering a signature Heisman Moment, Justin Fields would appear to be a shoo-in for the ceremony. And now J.K. Dobbins is coming off an outing that has reinforced his claim as the best tailback in the country. It’s not out of the question that all three of those superstars could wind up with enough votes to be named as finalists, although it might be tough since there’s a possibility they’ll be splitting votes as teammates instead of Ohio State having one clear-cut nominee. But those Buckeyes all have one more game on a big stage to make their case, and it will be fascinating to see how they perform in Indianapolis with a trophy on the line.

Poll watch: Ohio State still stuck behind LSU despite dominance
Which Buckeyes helped their cause in rivalry win over Michigan?