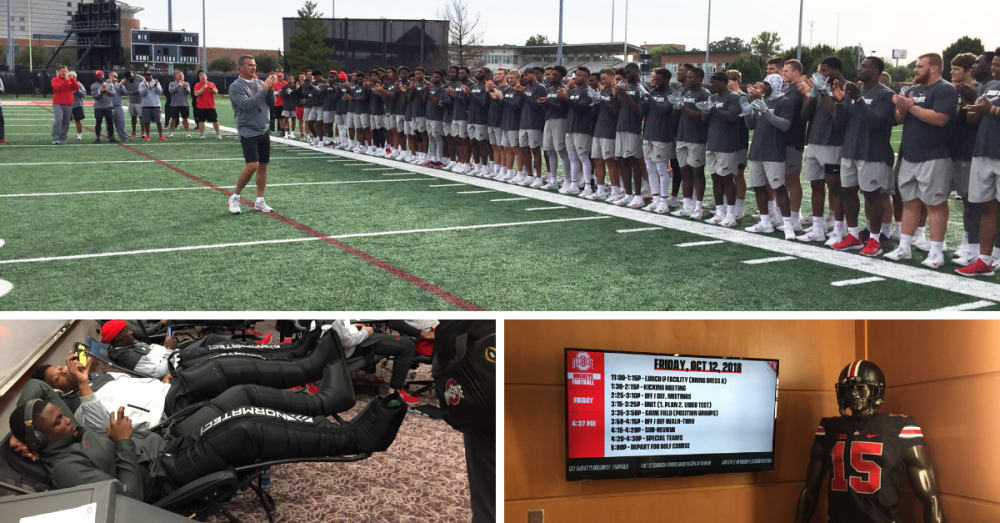 Ohio State uses the Best Fridays in Football to get ready for a game on Saturday. (Austin Ward/Lettermen Row)

COLUMBUS — Terry McLaurin needed to dunk a football in a trash can the day before catching one for a touchdown in the Horseshoe.

Johnnie Dixon had to have his bologna sandwich to keep his routine the same as he got his mind right to help lead Ohio State to another win.

J.K. Dobbins won’t even consider starting a meeting to gear up for Minnesota less than 24 hours before kickoff unless he’s devoured three Dunkin’ Donuts — preferably warmed up in the microwave.

Every routine is different with the Buckeyes, even at a program that is meticulous about its planning and timing, down to the smallest details of when a bus will leave a parking lot for a team meal. But every week is supposed to be the same, designed to make sure the players are all their absolute best when kickoff arrives.

Welcome to the Best Fridays in Football.

How do the Buckeyes find the right one? What does it take to get one of the nation’s most talented teams ready to go on Saturdays? Is there such a thing as too many delicious milkshakes from the nutrition staff at the team hotel?

Lettermen Row embedded with the Buckeyes for a Best Friday in Football experience to find out exactly what it’s all about before they went out and beat Minnesota last month. 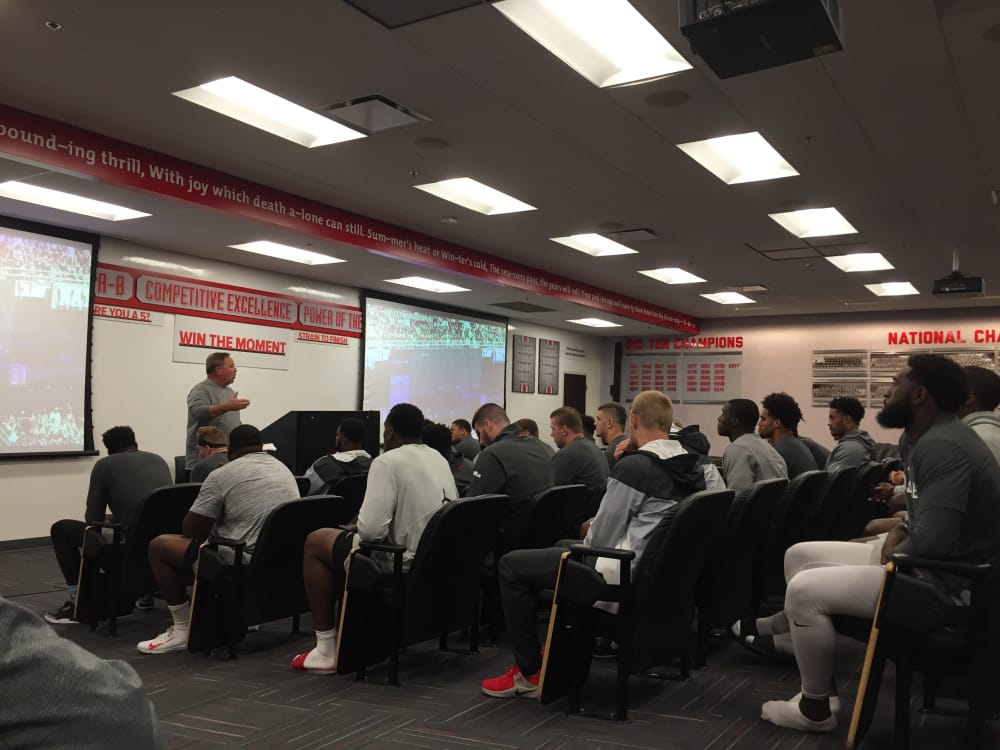 The approach has evolved subtly over time, but the goal remains the same for Urban Meyer.

The seventh-year coach wants his players fully prepared and able to flip on the intensity as soon as it’s required. But he also needs them to relax, have a little fun — and be able to get some sleep.

“I learned it from [Colorado State legend] Sonny Lubick,” Meyer said. “I was used to a much different mentality. The old-school was you met until 10 o’clock at night and until you couldn’t keep your eyes open. You watched a lot of film, and then all that did was not allow you to go to sleep. Sonny Lubick, the first time I was with him, I’ll never forget it. He let them come down and eat whenever they wanted to eat. They relaxed. Played cards.

“I even asked him, ‘What is this?’ I almost fell over. I couldn’t believe they were doing this.”

That approach stuck with Meyer over the years, and alongside his confidant Marotti, they’ve worked to perfect a formula that is equal parts methodical and laid back.

If those seem to be two clashing ideas, that’s largely by design.

Ohio State has to go through final film studies, it has to knock out walkthroughs and it’s going to sit through some absolutely fiery meetings with coordinators like Kevin Wilson peeling paint off the walls with his voice.

All of that is planned down to the second. But there are also large windows carved out for the Buckeyes to get their feet up, take advantage of the four massage therapists brought in on Fridays or linger for a bit longer in the catered lunch room with a buffet from Outback Steakhouse.

“Sometimes on Fridays coaches would just wear players out with meetings,” Marotti said. “At some point, you’re just going to have a blank stare. You still have to get the work done. But get the work done, and then make it fun and have a little chill time — we call it ‘woosa.’ 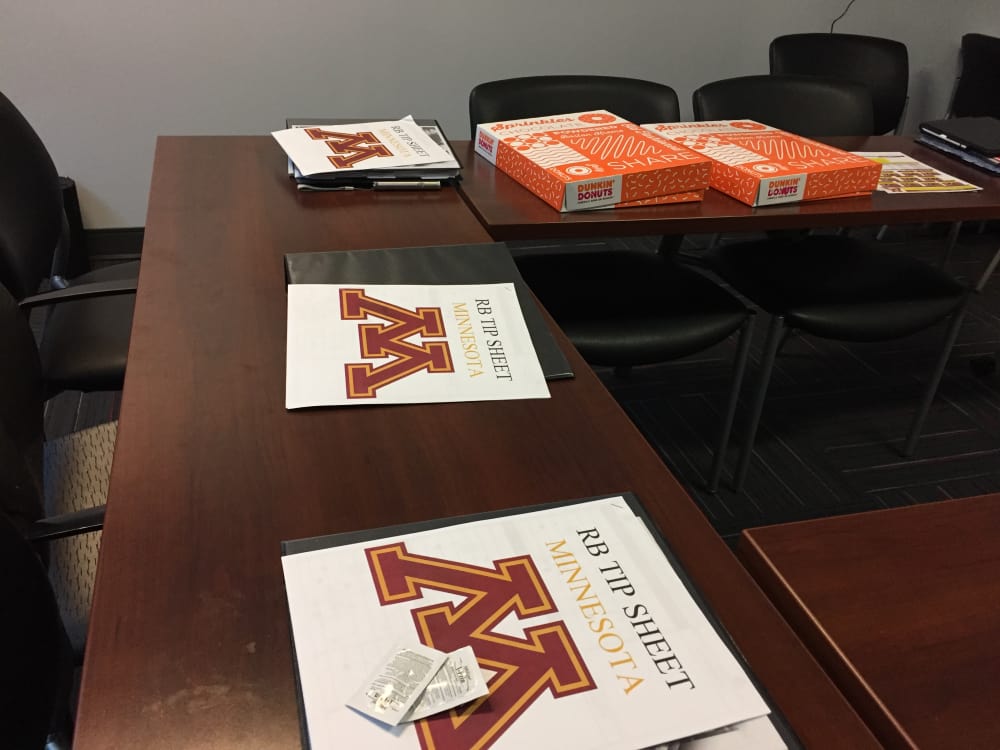 The donuts waiting for the Buckeyes in the Ohio State running back room were a huge hit. (Austin Ward/Lettermen Row)

J.K. Dobbins has a knack for finding that sweet spot between goofiness and seriousness.

“I don’t recall that,” Dobbins said before getting a massage at noon. “Maybe I let him win once when he was on a recruiting visit to be nice.”

Dobbins is quick to crack jokes. His wide smile lights up when he sees the box of donuts in the meeting room for the running backs. And when he’s questioned about his height, he makes Alford stand back-to-back with him and get measured.

But when the film is on and the laser pointer is in his hand, Dobbins doesn’t miss a beat when quizzed on his assignments. And he’s one of the leading examples of flipping the switch on and off that Ohio State is looking to the veterans to pass down to young guys learning the ropes.

“When you’re a young player, you don’t really have a routine,” Ohio State wide receiver and captain Terry McLaurin said. “And Coach Meyer really emphasizes when you’re young to get around an older guy. So, when I was coming up, it was Devin Smith, Mike Thomas, Evan Spencer, and I would see what they did on Friday nights before the game.

“I saw how they prepared and tried to integrate that into my own thing.”

There is some flexibility to that process, and players are free to do whatever they find comfortable.

For McLaurin, that’s making sure he gets exactly three chicken fingers at the team dinner at the Ohio State golf course. But for center Michael Jordan, he skips the provided lunch at the Woody Hayes Athletic Center and brings in his own meal from Burger King instead.

“Hey, there’s no secret sauce,” a team nutritionist joked as he checked off names of players arriving at the facility. “It’s really pretty straightforward with these meals, and we just want the guys to be consistent and get some carbs.” 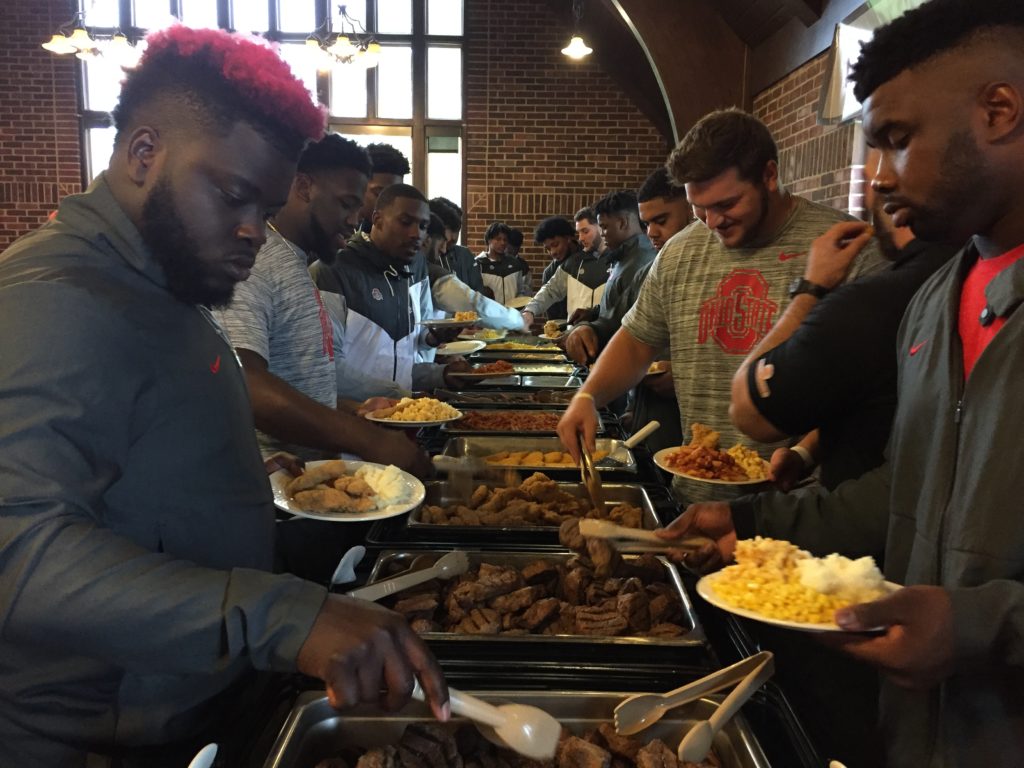 ‘Get the work done, but make it fun’

Urban Meyer has put his stamp on the schedule, of course. But he certainly isn’t one to mess with tradition, especially when he knows what dessert is waiting for him at the Ohio State golf course after dinner.

That short trip over with three busloads of Buckeyes and staffers has always been among the highlights of the weekend for the program. It ranks right along with the overnight stay at The Blackwell, where Ohio State heads as soon as the last pecan roll is polished off and the police escort brings them back within walking distance of the Horseshoe.

But before all that, every position unit has a chance to plan how they’re going to use a 15-minute window before a walkthrough that essentially turns into the world’s most competitive recess.

The Zone 6 version of basketball is played with two trash cans, a football and movement that’s restricted to three steps with possession — and looks much more like a challenge on American Gladiators than an actual game of hoops.

The receivers may have the most physical, competitive game going, but as soon as the whistle blows to start the freewheeling period on the practice fields, the competitive juices are instantly flowing with the Buckeyes channeling it in unique ways.

Defensive line coach Larry Johnson pulls out dozens of tennis balls, splits his unit into two groups and sees which one can throw the most into a trash can from 10 yards away. The specialists up the ante by trying to toss footballs into trash cans from about twice the distance, with kicker Sean Nuernberger providing a constant stream of trash talk on the way to a win over punter Drue Chrisman. There are elaborate games of hot potato, tight ends trying to punt into a net with their wrong feet — and Meyer watching it all in bemusement from the middle of the field. 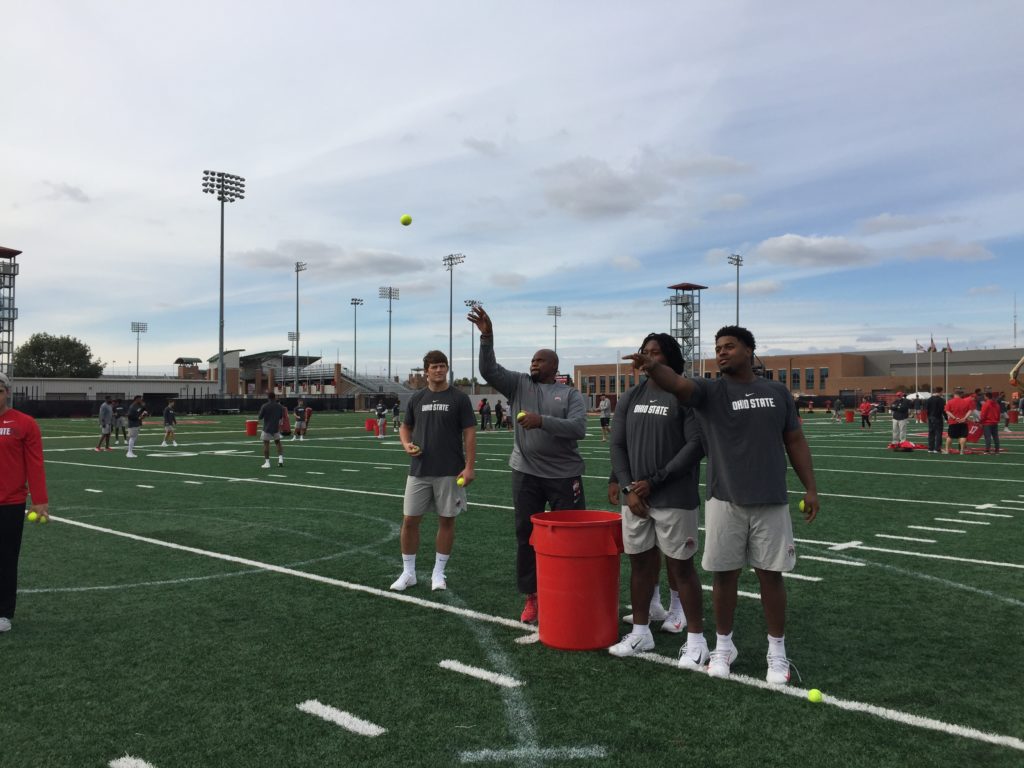 The smiles on the faces of the Buckeyes make it unmistakable: The Friday formula is working.

“It’s cool to go out there and do something a little different during a time when you’re trying to get locked in and ready for a football game,” McLaurin said. “Coach Meyer has been doing this a long time, and he knows you can’t always be serious all the time.

“Fridays are so unique around here. I feel like we have the best thing going.”

It’s right there in the name, and the Best Fridays in Football certainly live up to it.