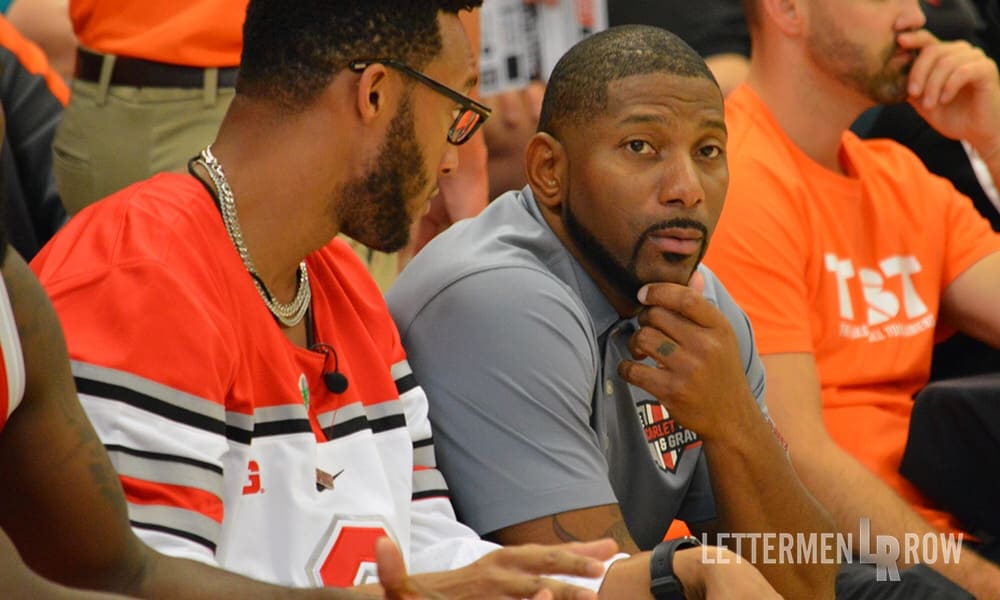 The Ohio State alumni team was knocked out of The Basketball Tournament on Sunday. (Nick Clarkson/Lettermen Row)

Scarlet and Gray unravel in second weekend at TBT

At least nobody on Scarlet and Gray needs to worry about splitting the winning share of The Basketball Tournament prize money now.

For all the good vibes of the opening weekend in Columbus, the talk about brotherhood, the excitement for a sold-out crowd of getting to watch a team of former Ohio State standouts again and the return of Greg Oden, the lasting memory of the TBT for the team might wind up being a fight over the check. After B.J. Mullens was a highlight machine in the first-round victory, the athletic big man was never seen again until publicly revealing that he had left the team over a dispute of his cut of the event’s winner-take-all $2 million payout.

Could he have slowed down Jimmer Fredette on Sunday in Atlanta? Probably not. But surely the squad of former Buckeyes would have been better off with him in what turned out to be a 100-78 loss that didn’t even feel that close down the stretch.

Only one team is going to win the single-elimination tournament, and losing before the semifinals isn’t really that big of a deal for a team that had already shown some signs of weakness during the opening weekend. But with everything from Jared Sullinger coming back from his wedding to play on Sunday to Oden being on the court again and those huge home crowds for an event that is growing in popularity, it’s unfortunate that the feel-good storylines were overshadowed by a squabble within the team.

And that argument, of course, didn’t wind up mattering at all.

The recruitment of Cormontae Hamilton is already legendary, and the 3-star tight end hasn’t even stepped foot on campus yet. If he winds up tapping into the immense potential that Ohio State and Hamilton’s high school coach see, the tale of his round-trip bus ride from Memphis to Columbus will be told for years to come.

On Friday, Hamilton took the next step by giving his commitment to the Buckeyes. And while he’s not quite in the prototypical mold for a tight end at Ohio State, his athleticism and versatility were clearly too appealing for the program to ignore.

“Cormontae Hamilton is strong enough physically, though he may not be as tall, but he’s strong enough to be an in-line guy,” Memphis (Tenn.) Whitehaven coach Rodney Saulsberry told Lettermen Row. “His flexibility to be an H-back or in the slot or even line up outside gives versatility to their offense that maybe they’ve not had.

“That’s a problem for the defense when you’ve got a guy with that versatility. He’s got potential to be an NFL guy. He’s too big for a defensive back to cover and too fast and too elusive for a linebacker to cover. Ohio State sees him as that ‘move’ type of guy. He can play all over.”

The seventh-ranked player nationally at his position, the trip carried enough importance that fellow 2020 recruit and Ohio State commit Paris Johnson Jr., came to town to see him.

“It definitely meant a lot to me,” he said. “Paris and I have a good relationship already and this just grew it even more. It also shows me that this is important to him and that he wants me to play at Ohio State with him someday.”

For more on the visit, check out Friday’s edition of Dotting the ‘Eyes.

By the end of the week, the Buckeyes will be back on the practice field. Let that soak in, because the miserably long, boring offseason is about to come to a close.

To help kill some of these final hours without Ohio State in pads, I looked at five key questions over the weekend that the program will need to answer in August. There isn’t a huge amount of starting jobs up for grabs, but that doesn’t mean there isn’t a lot of intrigue right now for the reigning Big Ten champions.

Lettermen Row, of course, will have complete coverage of training camp all month long heading into the opener against Oregon State on Sept. 1. Keep it locked right here for all the latest news and analysis on the Buckeyes.

You can see the pain when you look in my eyes ! #Year3💰 pic.twitter.com/cUO4HI1TE4

“Set, hit. Shock, shed. No soft guys in the secondary.”