FORT LAUDERDALE, Fla. — There was something missing from the Ohio State offensive repertoire five games into this season, and coach Ryan Day knew it.

He had some running backs — Master Teague III, transfer Trey Sermon, Steele Chambers, freshman Miyan Williams — and he had what most folks considered to be one of the elite offensive lines in the nation. But he didn’t have a running game he could count on consistently. He didn’t yet have a running back who stepped forward to not only claim the top job, but also prove he was a distinct cut above.

Then along came the Big Ten title game against Northwestern, when Justin Fields and the usually potent aerial attack seemed grounded by fog. But the rushing game? Oh my. Sermon was out there ripping through holes, running through arm tackle attempts and sprinting into the second level like never before in his brief stay at Ohio State.

It took Day a half or so to come to grips with the development.

“The Big Ten Championship game was when he really took off,” Day said. “I mean, it was probably the second half when I really realized what was going on. He was running hard, but then it just kind of went to a second level. Then he played great last week.” 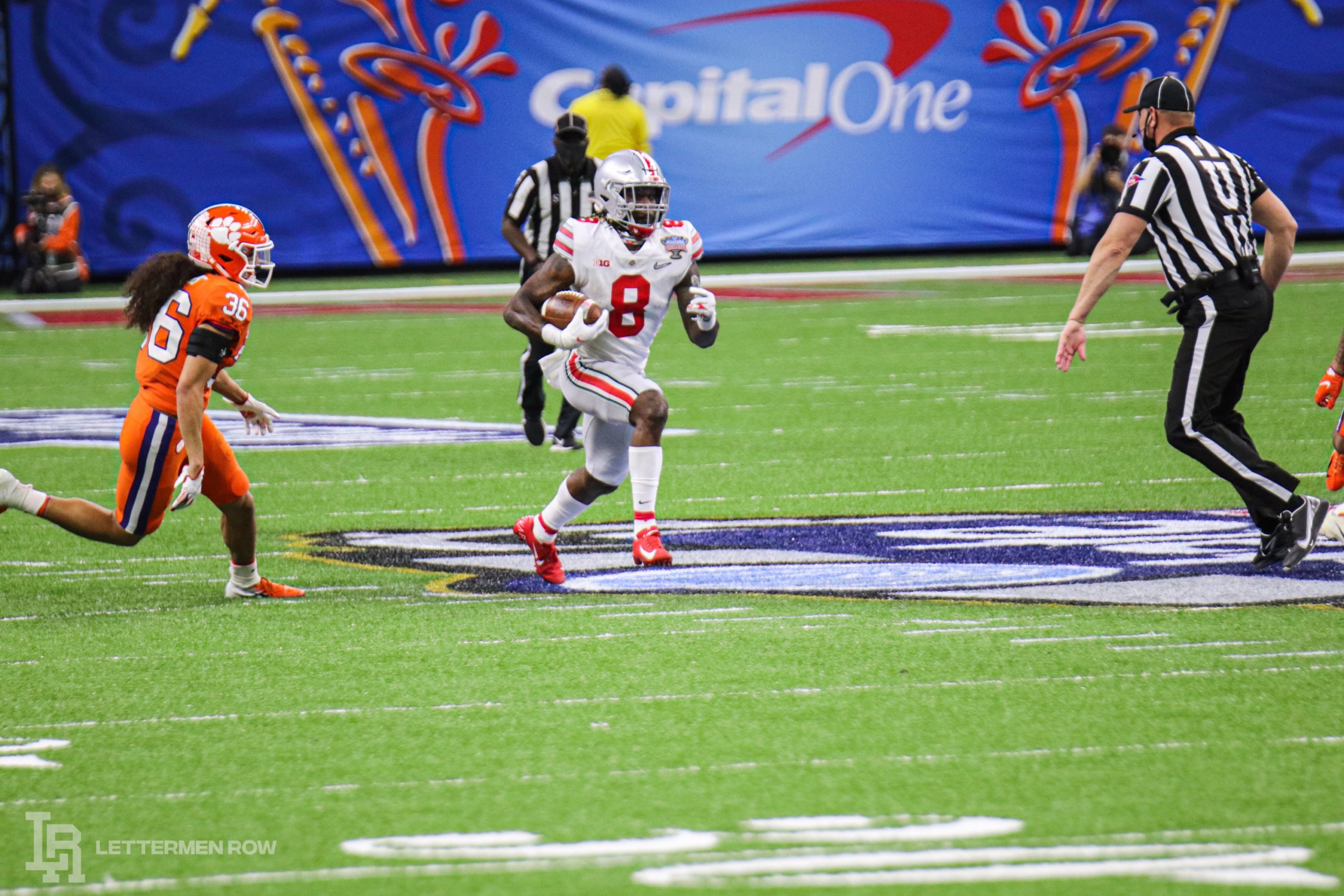 Ohio State running back Trey Sermon has been on a tear. (Birm/Lettermen Row)

A school-record 331 yards by Sermon against Northwestern, then 193 in the College Football Playoff semifinal 49-28 romp over Clemson are undeniable evidence the running game finally arrived this season for the Buckeyes as they head into Monday night’s national title game vs. Alabama.

While the running game saved the day against Northwestern, it proved to be the perfect counterbalance to Fields and the passing game against Clemson. It means the game Monday night will pit arguably the two most balanced and capable offenses in the seven-year history of the College Football Playoff, what with Alabama and its quarterback Mac Jones, running back Najee Harris and dangerous fleet of receivers led by Heisman Trophy winner Devonta Smith.

When Day is making calls from one sideline and Alabama offensive coordinator Steve Sarkisian is doing the same from the other, they will do so from complete playbooks that seem to have answers for any challenge presented.

Indeed, welcome to the most glaring example yet of where elite college football has progressed almost two weeks into 2021. It’s about putting great athletes in position to make plays. Running or throwing, whatever it takes to get them the ball and score sooner rather than later.

Even the once conservative, defense-minded Alabama coach Nick Saban has embraced the flow.

“I think it’s a great game for fans,” the six-time national champion Saban said. “Obviously we score a lot more points with this style of play than we used to in the past, and I think that always makes it exciting for the fans.” 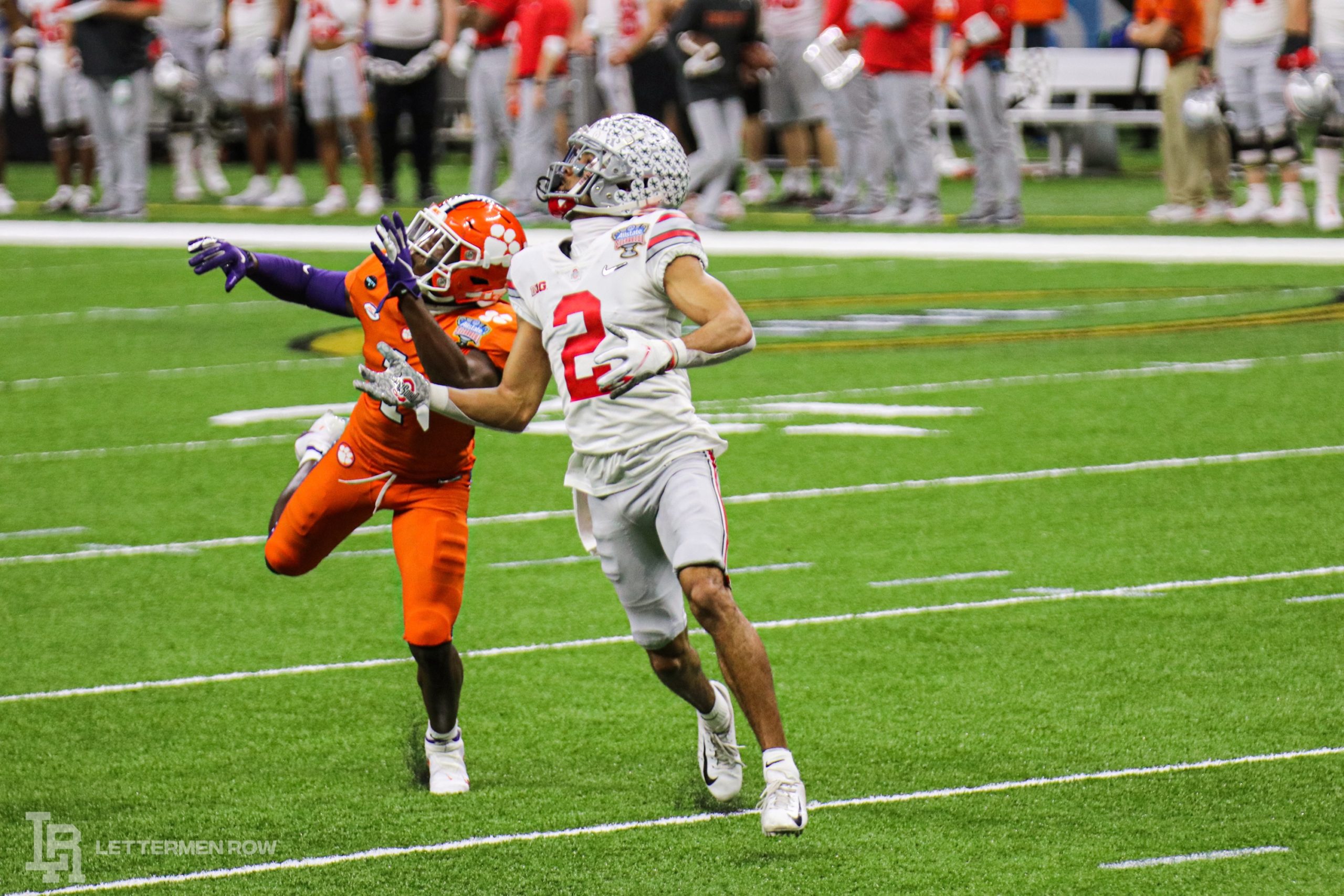 Ohio State wide receiver Chris Olave is one of the most explosive players in the country. (Birm/Lettermen Row)

Let it all hang out sure seems to be the order of business headed into this title match. Day stressed that fundamentals still rule on the practice field, but not conservative playcalling on the game field. And that’s why judging the play of one’s defense has evolved.

“Fundamentally it hasn’t changed, but just the way the game is being played has, and it’s all about getting stops,” Day said. “I mean, it isn’t really about how many yards you give up. I think controlling the game does matter, but at the end of the day it’s about getting stops, forcing field goals, and getting turnovers.

“You can let them drive the entire length of the field, but if they kick field goals or you get turnovers along the way, good things are going to happen.”

One thing that can be counted on Monday night is for both teams to come out swinging on offense. Call it the Haymaker Bowl, because the shots are going to be tried.

And as Ohio State showed in the win over Clemson, with the line taking control, with Fields on target, with Sermon on the ramble and with receivers Chris Olave, Garrett Wilson and Jameson Williams along with tight end Jeremy Ruckert and Luke Farrell breaking open, it is capable of exchanging shots with any team. It was the most complete game offensively by far this season for the Buckeyes, so far. But it was a culmination, not a revelation.

“That just doesn’t happen, the chemistry we have, the trust we have in each other,” Olave said. “We all knew we all had trust going into the game in each other. We all wanted to put it all on the field and leave nothing.

“Coach Day dialed up some things and we went out there and executed, but that doesn’t happen just that week. That happens all in the off-season, all grinding together, all blood, sweat and tears. Just to come to that game and perform.”

The aim Monday night is to do it again, this time in pursuit of a national championship. The win over Clemson showed what was possible.

“We’ve dreamed of that since we were kids and now we were in that moment,” Olave said. “And we’ve got another game to have fun and cherish.”

And let it all hang out.