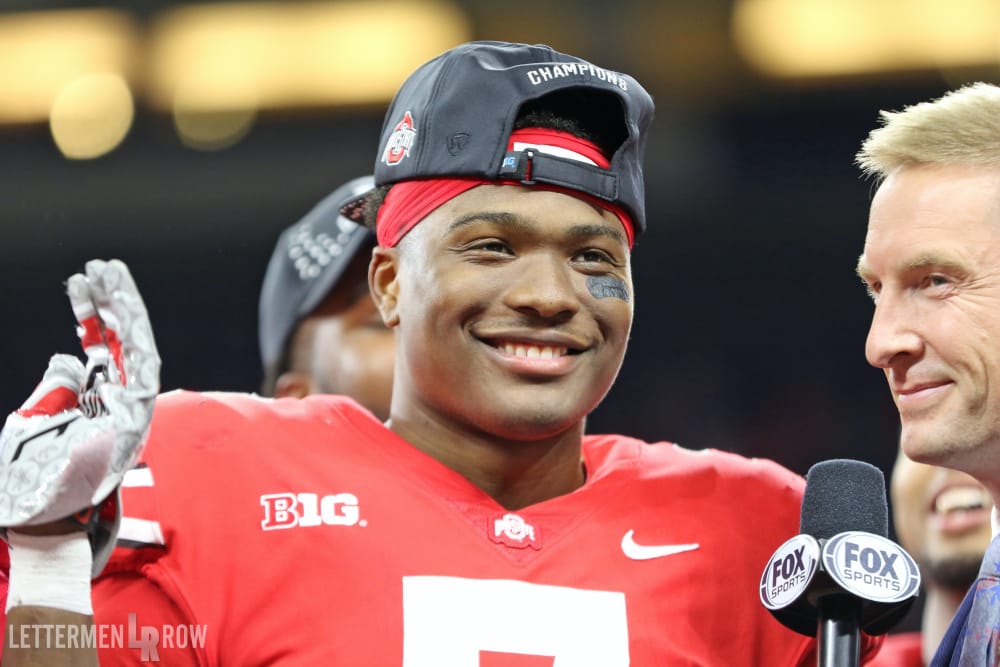 Ohio State quarterback Dwayne Haskins had massive moments this season that earned him a a shot at the Heisman Trophy. (Birm/Lettermen Row)

COLUMBUS — Dwayne Haskins has crammed a lot of magic into one year.

From coming into The Game for an injured J.T. Barrett last season to a near-500 yard and five touchdown performance in a Big Ten Championship win, the Ohio State quarterback has had a few memorable moments in his 14 games with the Buckeyes. In his 13 starts this season, he won big games, broke program as well as Big Ten records and been able to rise onto the national scene.

His reward? Becoming the first Ohio State player since Troy Smith in 2006 to be invited to New York City for a chance at hoisting the Heisman Trophy.

The road to the Big Apple, however, was not an easy one. It required a tough win in Happy Valley, carrying the Buckeyes to an overtime win in Maryland, a performance for the ages against The Rival in The Game and capping it all off with Big Ten championship-game MVP award. Haskins will head to the Rose Bowl leading the nation with just under 4,600 yards and 47 passing touchdowns — and tied for the NCAA lead with 51 touchdowns accounted for.

To recap a spectacular 2018 for the leader of the Buckeyes, Lettermen Row took a look at some of his best performances and plays from this season.

What better way to cement a name in Ohio State history than to lead a massive comeback against Penn State in Happy Valley’s Whiteout conditions? Well, Haskins did that in just his fifth start and the first true road test of the season.

Trailing by 12 with just under seven minutes left, Haskins led the Buckeyes on down the field quickly on a 3-play drive capped off by a ridiculous touchdown by Binjimen Victor. Minutes later after a Nittany Lions 3-and-out, Haskins again quickly led the Scarlet and Gray on a drive trailing by five all the way to the Penn State 24 yard line.

There, he found K.J, Hill on a swing pass, and thanks to some blocking out in front of him, it provided the best play of this performance by Haskins.

The next week, Haskins was back at it again in Columbus. Only this time, he nearly broke three records making it look easy.

Against Indiana, Haskins completed a school-record tying 33 of 44 passes while also tying an Ohio State single-game record with six touchdown passes. He also came up just three yards shy of the single-game record for passing yards with 455 against the Hooisers. This performance — if he hadn’t already — allowed Haskins to officially throw his name into the Heisman conversation, and he topped it all off with a gorgeous ball to Victor again.

It was not a pretty afternoon for the Ohio State defense against Maryland last month, allowing 535 yards of offense and 51 points to the Terrapins. But luckily for the Buckeyes, and like a few other games, Haskins lead them to victory when they needed it most.

Behind six total touchdowns from the Maryland-native and a career day from J.K. Dobbins, Ohio State was able to outlast Maryland in this 103-point explosion. Surprisingly, half of the touchdowns for Haskins on this day came on the ground, showing that he is able to move out of the pocket if needed and giving him more confidence heading into the final stretch of the season.

With that said, the top play of the performance here isn’t the most exciting, but it surely shows how big Dobbins was for the Buckeyes and a quarterback beginning to trust his own feet.

After Haskins returned from his home state with a win, there was just one game remaining in the regular season: The Game. He was no stranger to the atmosphere or pressure after last season’s appearance, and Haskins provided a record-breaking performance for the ages to give Ohio State its seven-straight and Urban Meyer’s final win over The Rival.

He threw for 318 yards and five touchdowns on his way to breaking a pair of Big Ten single-season records. He passed the previous record of 39 touchdowns in a season, held by Purdue’s Drew Brees, and 3,985 passing yards, held by Purdue’s Curtis Painter, to finish the regular season with 41 touchdowns and just over 4,000 yards.

The best play of this one belongs to Haskins, but it also goes to Chris Olave, who also made a name for himself in The Game with two touchdowns and a blocked punt returned for a touchdown by Sevyn Banks.

In case his entire season wasn’t enough, Haskins truly made the Heisman Trophy race a bit more interesting with his showing at Lucas Oil Stadium in the Big Ten Championship game.

The Ohio State quarterback led the Buckeyes to a Big Ten title behind a 500-yard, five touchdown explosion that earned Haskins the honor of winning the game’s MVP award and the school’s second-straight conference championship. Haskins made some spectacular throws in this one to show off his touch and strength, but there was none better than this one to Terry McLaurin.