Connect with us
Loading the player...
Ohio State coach Ryan Day has some big decisions to make before the opener. (Birm/Lettermen Row)

COLUMBUS — The competition at Ohio State never ends, so there’s no such thing as a definitive depth chart for Ryan Day.

What the Buckeyes coach really needs to know boils down to a more clearcut, in-or-out designation.

If a player is Game Ready, he’s going to get on the field for Ohio State in the long-awaited season opener against Nebraska on Oct. 24. And the time to make that call is fast approaching as the Buckeyes wrap up training camp with another scrimmage in the Horseshoe this week before ramping up preparations for the Huskers. 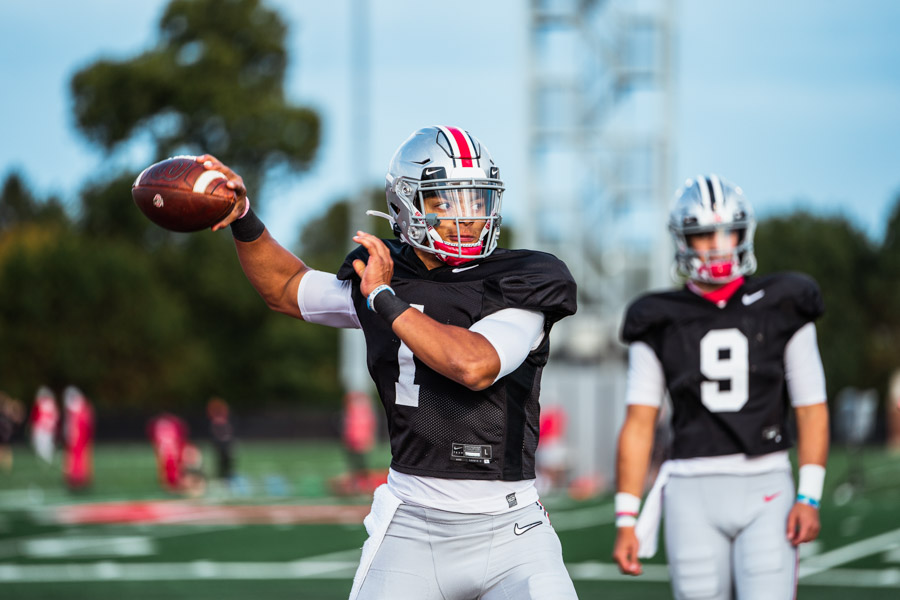 “We’re going to roll guys, and really that’s the decision we make. If you think about the last couple years here … we have great players, and they all played. We will constantly roll guys, and the question really becomes: Is he game ready? Do we feel confident putting him in the game? If we do, then we’re going to play depth. If we don’t, then that’s harder.”

Considering the elite level the Buckeyes have recruited at over the last few years, there are certainly plenty of appealing options for Day to choose from as the program enters the final phase of its bizarre preseason. And the truth is the coaching staff is going to still be evaluating and potentially tweaking the plan all the way through that debut against Nebraska as it finally gets some live reps to help with the decision-making process.

The Buckeyes are certainly taking nothing for granted against the Huskers coming off the extended layoff from live action that dates back to the Fiesta Bowl in December. But they’ve also dominated this series recently and are no doubt going to be facing a much more challenging, high-stakes battle the following week at Penn State — which only adds to the urgency to figure out who all should be on the field.

The top priorities appear to be at defensive tackle and safety right now, though Ohio State is also expecting to play both Nicholas Petit-Frere and Paris Johnson at right tackle next week. But in a year that should test the depth of just about every program in the country, the Buckeyes are scrutinizing every last member of the roster and willing to let all of them play if they clear the pass-fail exam.

“Yeah, I would say probably the inside [defensive] tackles are the biggest concern in terms of depth,” Day said. “You know, I think everywhere else you’ve got pretty good depth across the board. But hopefully we can get a few of those guys back here and then kind of go. The good news is we have some really good bodies in that room, even though there are more defensive ends available. There are different things we can do, different looks we can give, different fronts — so, we’ll solve the problem. But it’s definitely a group that has to step up and create depth.

“That’s where the depth is critically important, especially this season with all the unknowns with the virus and all the things that can come down the road. That’s something we’re still talking about. Who are the guys that are game ready? There are some guys who are game ready, but there is still a good portion who aren’t — and that’s why this week has got to be a really strong week for us.”

This is the last one for the Buckeyes without a real game. And now it’s just about time to find out who’s ready for one.

Ohio State coach Ryan Day, quarterbacks coach Corey Dennis and star junior Justin Fields met with the media on Tuesday before practice to update the progress of the Buckeyes. Their full comments are available below, and all Ohio State press conferences can be streamed on the Lettermen Row YouTube channel.