Connect with us
Ohio State defensive end Tyler Friday is beginning to push for a key role with the Buckeyes. (Birm/Lettermen Row)

COLUMBUS — Ohio State couldn’t afford to wait for the future stars on the defensive line.

The Buckeyes have needed them sooner than expected. And even if the first few weeks only wind up being a glimpse at what’s to come for the Rushmen, that has surely been enough to terrify both quarterbacks on the schedule for the rest of this season and for years down the road.

After all, if No. 6 Ohio State is capable of racking up five sacks while missing a senior captain for the third consecutive game and with another rising star held out for the entire second half, just imagine what it might do when it has a full complement of pass-rushing weapons.

“The defensive line has controlled the line of scrimmage,” Ohio State coach Ryan Day said after the win over Indiana. “They’ve created some sacks, created some turnovers — and if we can get teams in throwing situations, I think that’s an advantage [for] us. 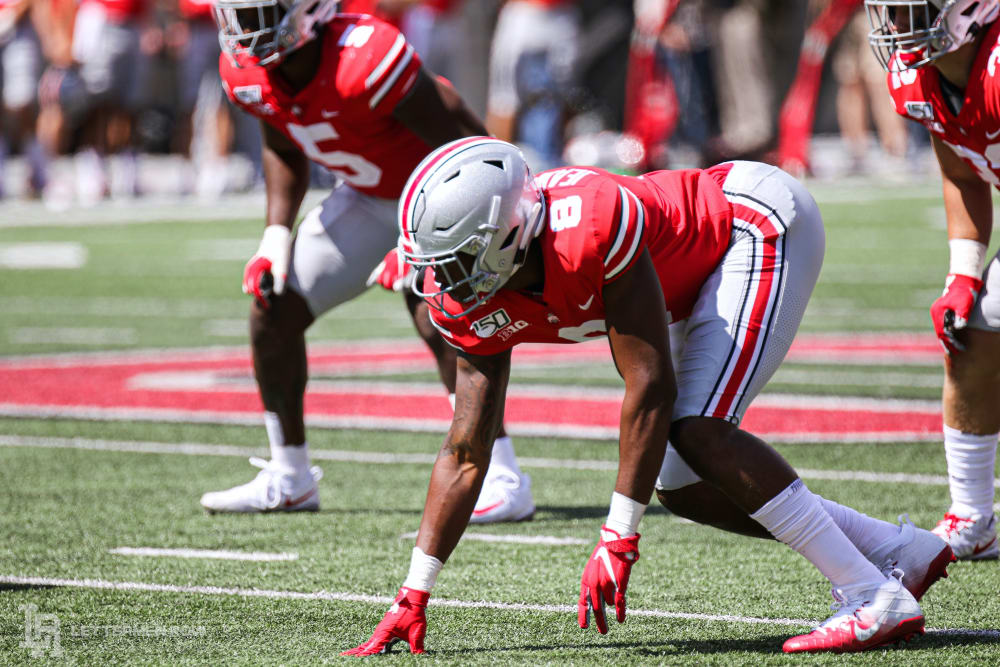 There was no question about who had the upper hand in the trenches as Ohio State was picking apart Indiana 51-1o in the Big Ten opener on Saturday. And the fact that Jonathon Cooper was again on the sideline recovering from a high-ankle sprain and Tyreke Smith was limited to just a half with an undisclosed issue only made the outing more impressive.

Those absences opened the door for Buckeyes on the rise like Tyler Friday, Javontae Jean-Baptiste and Zach Harrison — and all of them made the most of the opportunity. Each of those three guys contributed sacks against the Hoosiers. And for Jean-Baptiste and Harrison, those takedowns were the first of their careers and a glimpse at the upside they bring to the lineup moving forward.

Ohio State has obviously had its depth tested up front in a hurry this season. But the way the defensive line has responded not only bodes well for the future of the unit, it also means there’s a scary amount of depth on hand to help for the rest of the way this year.

What has helped Tyler Friday, Javontae Jean-Baptiste and Zach Harrison turn into contributors so quickly for Ohio State? How will the Buckeyes look when they finally get healthy? How will position coach Larry Johnson manage that rotation when he has all of his pass-rushers available? Former Buckeyes captain Zach Boren returned to the Lettermen Row film lab to break down what he’s seeing from the Rushmen heading into Week Four in the latest episode of BuckIQ.