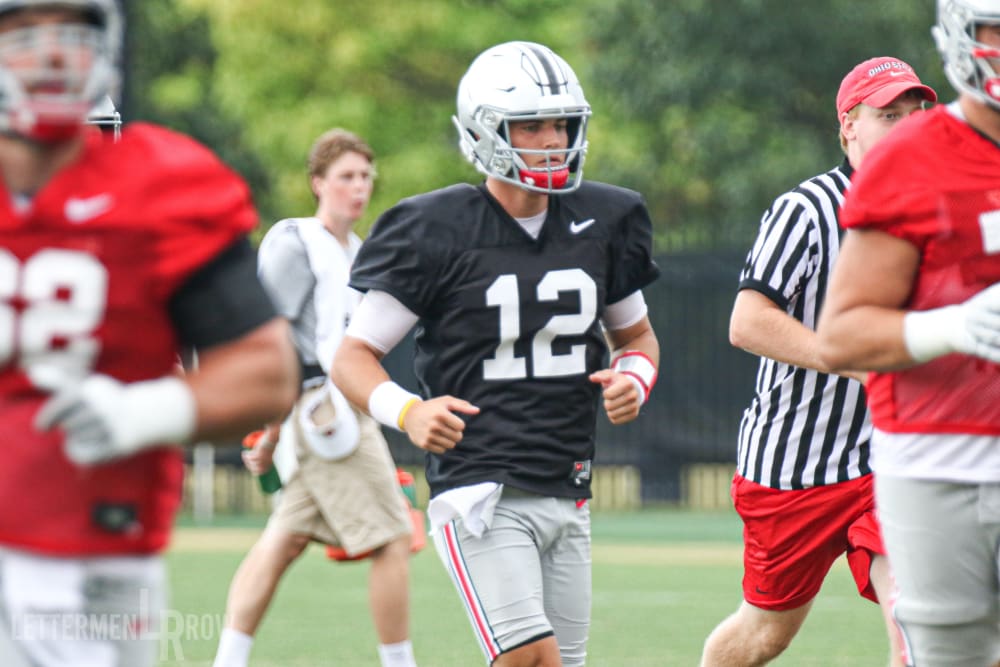 Ohio State backup Gunnar Hoak is trying to get up to speed with the offense before the Buckeyes opener. (Birm/Lettermen Row)

The speculation, debate and conversations about Ohio State never end, and Lettermen Row is always ready to dive into the discussions. All week long, senior writer Austin Ward will field topics about the Buckeyes submitted by readers and break down anything that’s on the minds of the Best Damn Fans in the Land. Have a question that needs to be tackled, like the one today about the Ohio State and the backup quarterbacks? Send it in right here — and check back daily for the answers.

We all believe Fields is our starter. Are we still playoff caliber if we need to turn to our backup?

Ryan Day started the conversation with his quarterbacks on Monday by reflecting on the 2014 run to the national championship when Ohio State had to turn to a third-stringer in the postseason.

The message: Just because Justin Fields is the starter doesn’t mean the backups for the Buckeyes can relax.

But there’s a pretty big difference between this current Ohio State roster and one that went from Braxton Miller to the most prolific player in Big Ten history in J.T. Barrett and then handed the baton to rocket-armed Cardale Jones, a talented passer still collecting an NFL paycheck. Fields has the potential to push Ohio State over the top in the College Football Playoff race, but it’s much harder to figure out where the ceiling would be for the program if it has to turn to Gunnar Hoak or Chris Chugunov for any extended period of time.

There is absolutely no doubt that there would be a drop-off for the Buckeyes without Fields. But how big would it be?

Right now with Hoak still just trying to get comfortable with the offense, it would certainly be a problem for Ohio State to turn to the backup option — and until the growing pains are in the rearview mirror, that guy might actually be Chugunov. Day has earned his reputation as one of the best quarterback gurus in the country, and he and Mike Yurcich should be able to squeeze every bit of potential that exists out of those two arms this season. But just like there was a reason Fields was evaluated as the most decorated recruit in school history, there were also reasons why Chugunov and Hoak were available to provide depth for the Buckeyes after leaving West Virginia and Kentucky, respectively. 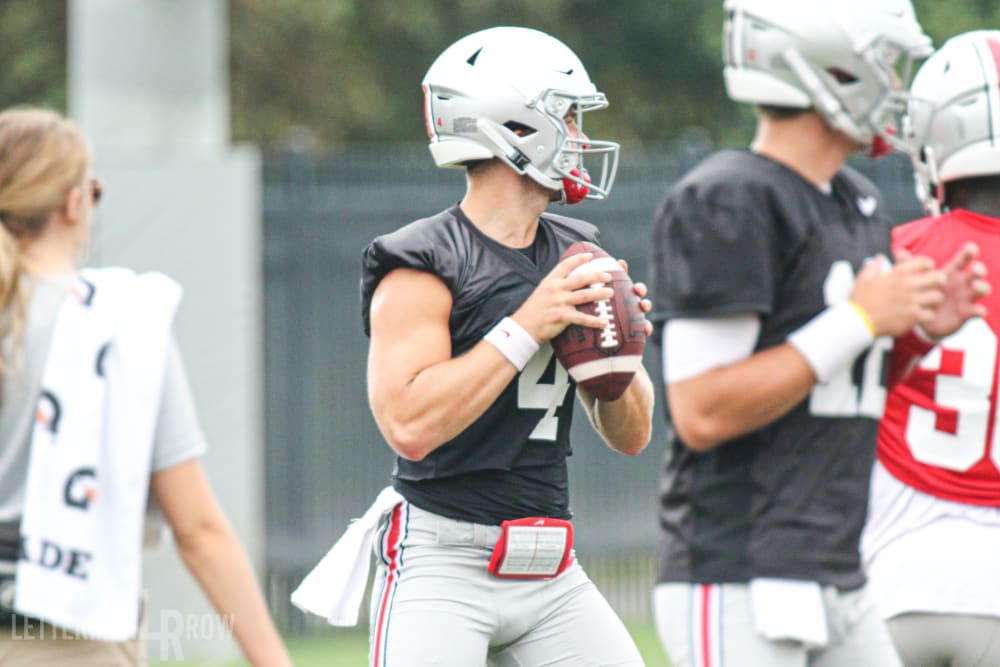 Ohio State backup Chris Chugunov is fighting for the No. 2 spot behind Justin Fields for the Buckeyes. (Birm/Lettermen Row)

Those Ohio State champs in 2014 essentially had three starting-caliber quarterbacks. The truth is that’s really not the case for the Buckeyes right now, even if both of those guys bring enough to the table to keep one of the most loaded rosters in the country on track to potentially win 10 games.

But winning the Big Ten and making a run at the national title is going to require Fields, and that’s almost certainly why Day has been upfront and honest about monitoring his rushing attempts to keep him healthy.

“I think Gunnar and Chris both bring good skill packages to the table,” Day said on Monday. “They both are accurate throwing the ball, got a good feel for anticipation and touch. A little bit more athletic than you think they are. Like we’ve done in the past, we put the whole offense in, then based on what the quarterback can do, we’ll tailor it to what his skill set is, just like we did with J.T. and with Dwayne, Joe Burrow when he was in there. Now we’ll do the same thing with these guys.

“We’ll let these guys keep learning the offense. With Gunnar, we’ve practiced 14 or 15 [times], only been in the offense really 15 practices. So really he’s at where Justin was coming out of the spring. So he’ll keep growing day in and day out. They’ll keep working. As we get closer to the game, we’ll decide if Justin were to come out of the game, who would go in next. They’re both working hard, improving every day.”

That’s probably more important for Gunnar Hoak since he appears to have the greater upside, and there’s still a little time for him to settle in before the season starts at the end of next week. But that process is going to have to continue into the season, because the Buckeyes know better than just about anybody how backup quarterbacks can impact a team’s championship potential.