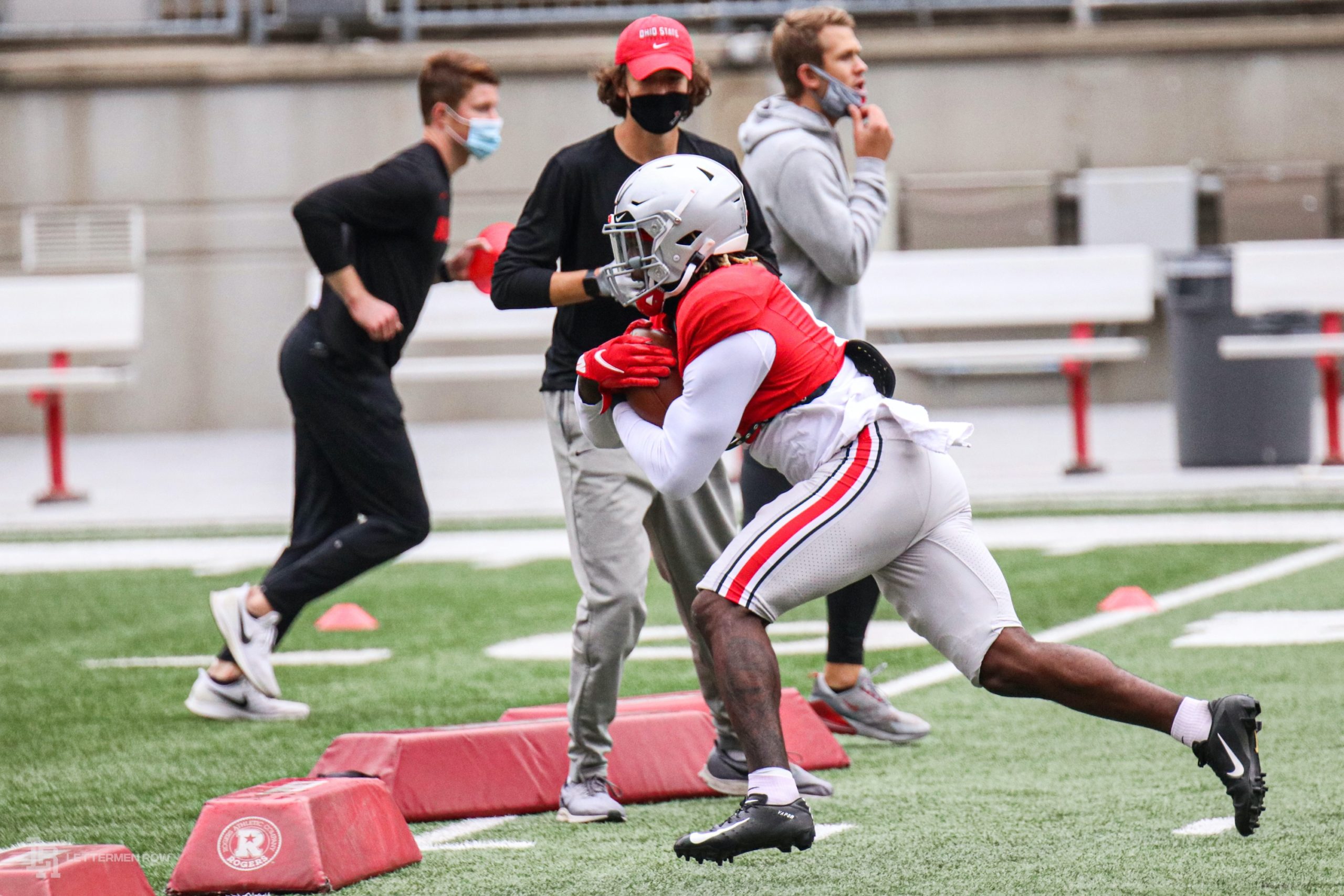 Trey Sermon ran against Ohio State in 2017, and now he's running for the Buckeyes. (Birm/Lettermen Row)

COLUMBUS — The road to Ohio State was an unsual one for running back Trey Sermon and defensive tackle Antwuan Jackson.

It’s honestly not a path that many recruits who spurn the Buckeyes ever get to take. Recruits who get close to the coaching staff at Ohio State but ultimately choose another program don’t usually get a chance to correct course if things don’t go as planned elsewhere.

Larry Johnson accepted a commitment from Jackson when he was a high school senior. The Cedar Grove (Ellenwood, Ga.) 4-star prospect never publicly committed to Ohio State, though, and he ended up flipping to Auburn and playing there as a freshman.

But it was the relationship with that Johnson he kept thinking about. It resonated differently.

“It was very special,” Jackson said. “He built a relationship with me, but also my dad. My dad had been coming off of a stroke, and he made a real good connection with him and I really loved that.”

But still, Jackson picked Auburn despite his father preferring the Buckeyes.

“I was just young, and I just didn’t understand,” Jackson said. “I just didn’t really get it. My dad was really telling me: ‘Ohio State, Ohio State.’ Nothing was wrong with Auburn. Auburn was still a good school, just being there I was really thinking about Coach J a lot and how he could develop me. We built that relationship still when I went to junior college, we were still building that connection.” 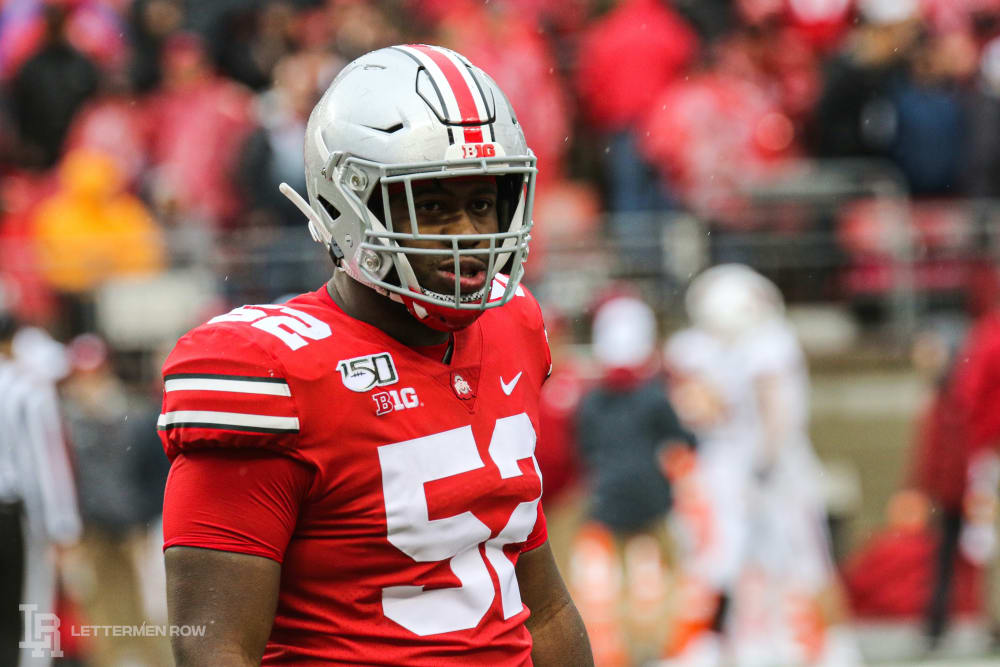 When Jackson was the country’s No. 1-ranked junior college defensive tackle at Blinn College in Texas, Johnson wasn’t going to let him go a second time.

“It is unique,” Johnson said on Wednesday. “Very seldom do we go back and get a guy that committed to us, and decommitted to go somewhere else, and then come back to us. That’s tough to do.”

Trey Sermon never committed to Ohio State, publicly or otherwise. He was heavily recruited out of Marietta (Ga.) Sprayberry High School in the Class of 2017, as is expected for the country’s No. 12-ranked running back. The Buckeyes picked up an earlier commitment from a Texas tailback named J.K. Dobbins, then Sermon picked the Sooners in April of 2016 after a pair of visits to Columbus in the year prior. He was a key part in Oklahoma’s big win at Ohio Stadium as a freshman. That was when he and Tony Alford reconnected for the first time after his recruitment.

“I remember after we played them, we talked a little bit after the game,” Sermon said. “He was checking in with me, seeing how I was doing.”

That sounds generic, and maybe it was. But it reinforced what Sermon had come to know about his current running backs coach, and it was validated again when he decided to enter the transfer portal following his junior year at Oklahoma.

“Once we got to this point, it just kind of picked up where we left off,” Sermon said. “It was just unique because Coach Alford is such a genuine guy. All the players he comes in contact with, he really cares about them. I feel that was the thing that stuck out the most.

“I definitely feel like that’s unique with him. You just don’t find that too often.”

Recruiting is about relationships, and they don’t need to end just because a player or a school go different directions. True connections happen and persist even after a Letter of Intent is signed, and time creates the distance between the two parties. That doesn’t mean the end of a recruitment has to signal the end of a relationship. When Sermon needed to once again be recruited, it was a simple matter of remembering where the relationships were before.

“It’s kind of like: ‘Well, I know what that guy is over there, and I know what these people are over here,'” Alford said. “That was a relationship that was a positive one — it ended on a positive note with us going one way and him going the other — and so it was an easy transition as far as getting to know each other. It wasn’t like we had to re-establish this deal and figure out what went wrong because nothing went wrong, 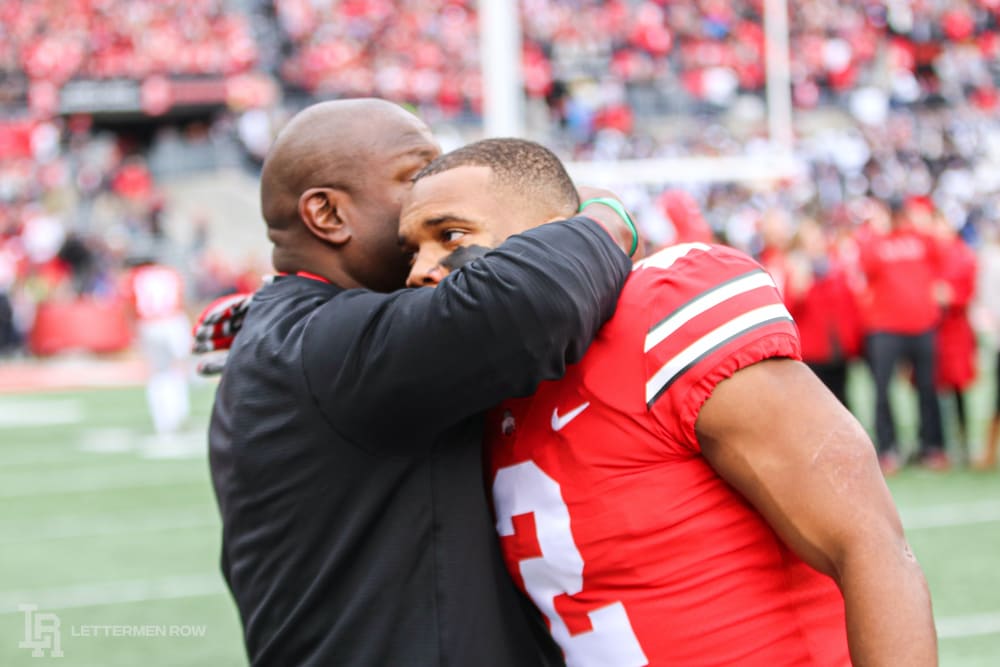 Relationships that go beyond football have been a staple of Tony Alford’s Ohio State career. (Birm/Lettermen Row)

Ohio State is one of the country’s premier football programs in major part because its coaching staff has located, and lived, on the line between coach and mentor, trainer and guidance counselor. It’s not a trick or a sales approach, it’s a tangible difference that players like Trey Sermon and Antwuan Jackson experienced years ago and felt again years later. It’s a personal relationship that promotes a professional pathway for player and coach alike. It’s why Trey Sermon, coming from a College Football Playoff program, “fell in love” with the culture in Columbus.

It’s why for Antwuan Jackson, after ups and downs since his decision to decommit from Ohio State in the winter of 2015, this year is personal.

“I really just love him and Coach [Urban] Meyer for really bringing me back in,” Jackson said. “It really means a lot to me to give me a second chance. [Not a lot of people] get that second chance. Coach J said I was his first to ever do that, to go back and get somebody, so I really feel kind of special and I really owe that to him this year.”

Personal investment in a player’s future, whether they pick the school you represent or not has its rewards.

“It’s not just football,” Alford said. “There’s a genuine care for young men and their lives and building their lives and the mentorship that comes along with it, we just happen to be able to do it in the name of football. The same conversations we have with our players are the same conversations that I, and we, have with my three sons. Identical conversations. it doesn’t mean you’ve got to like them but they’re real. At the end of the day if the kids know you care about them, what will they not do for you?

“If you ask the players to open up their hearts to you, we better be ready to do the exact same thing or once again it’s a one way street.”

Real relationships lead to real recruiting wins. Sometimes it just takes a few unexpected turns to get there.