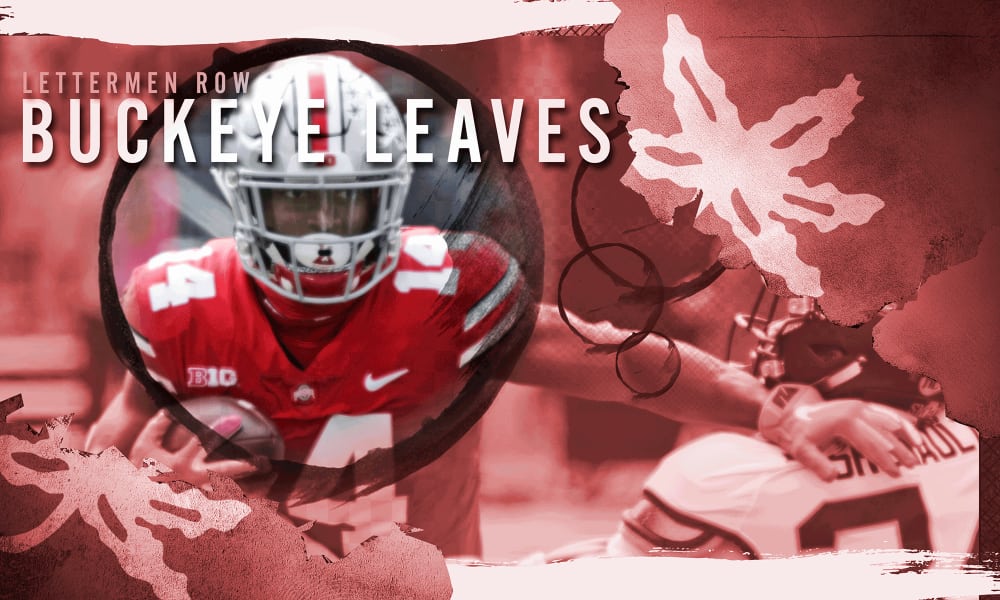 COLUMBUS — K.J. Hill is getting to the point where it’s getting more difficult to pick his biggest, best catches.

But the Ohio State wide receiver didn’t hesitate to give his highest marks to his latest entry on the highlight reel, a mesmerizing, impossible-to-believe, one-handed grab on the run for a touchdown on Saturday in the win over Minnesota.

“Definitely a 10,” Hill said. “Really, it was supposed to be an easier catch because I was supposed to turn my head around faster. But I guess was just so surprised that I was looking around, and when I turned my head, it was just a reaction really.

“I’ve done it in practice, so I don’t think on the sideline that it was a surprise that I did it.”

It was so good, the Buckeyes couldn’t even wait to watch the replay until after the game, with teammate Johnnie Dixon busting out his phone in the locker room at halftime to show Hill exactly what he did before coasting to the end zone.

Now, along with clutch touchdown grabs in wins over TCU and Penn State to go along with it, Hill is making his case as the go-to performer when Ohio State needs a spark in the passing attack.

“He made a crazy play,” Buckeyes quarterback Dwayne Haskins said. “At first I was kind of mad because that play we’ve been working all week in practice, and it happens a lot faster. So, I wanted him to get his head around, so when he looked, the ball was already there and it was a little behind him.

“K.J. is a little character. He was pretty hyped up, and he had a career day today.”

There’s no question that rated as one of the best he’s ever delivered for the Buckeyes, and the competition is getting fierce. 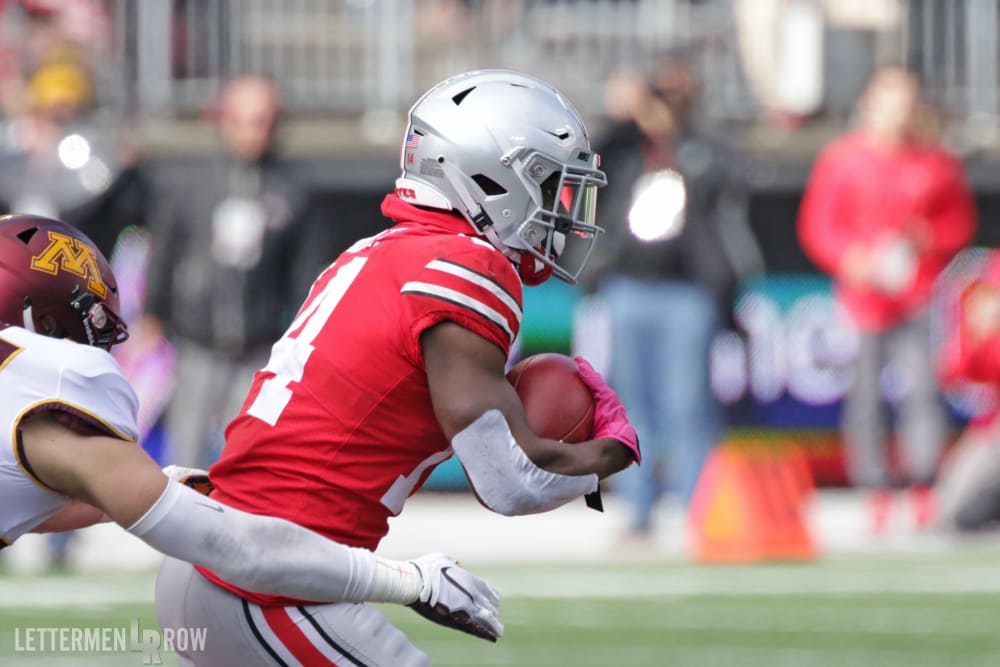 K.J. Hill is becoming a force for the Ohio State Buckeyes. (Birm/Lettermen Row)

Dwayne Haskins delivered another fantastic outing with more than 400 yards passing, but the redshirt sophomore quarterback might have had a hard time holding off K.J. Hill for top offensive honors this week if he hadn’t already been retired from consideration. Hill was masterful at wide receiver, hauling in 9 catches for 187 yards and a pair of touchdowns while also adding one of the best grabs Ohio State has seen in years. The Buckeyes are still more than capable of spreading the football around to its deep cast of wide receivers, but Hill is proving to be one of the most reliable, dangerous weapons on the team. 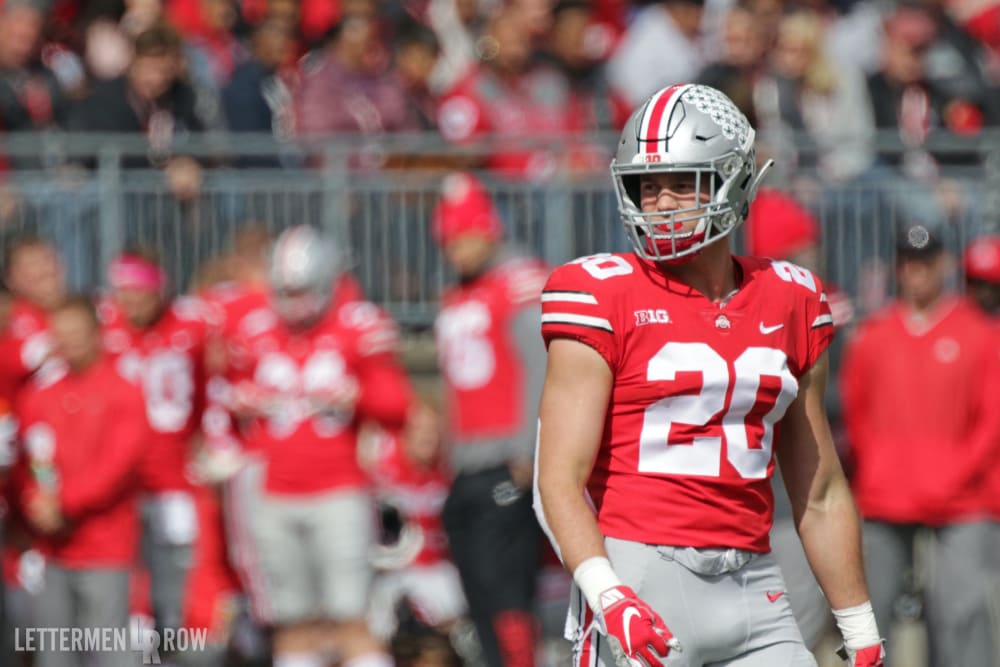 A surprise starter coming out of training camp, Pete Werner is validating that decision and getting stronger with each passing week in the lineup. Against Minnesota, he delivered his best overall outing to date with 10 tackles, including 2.5 for a loss with a sack. And perhaps even more encouraging for Ohio State? He came into the postgame press conference dwelling on the mistakes and areas where the Buckeyes still have to get better instead of a second-half shutout and his own individual improvement. Pete Werner is developing into the kind of consistent linebacker the Buckeyes absolutely need. 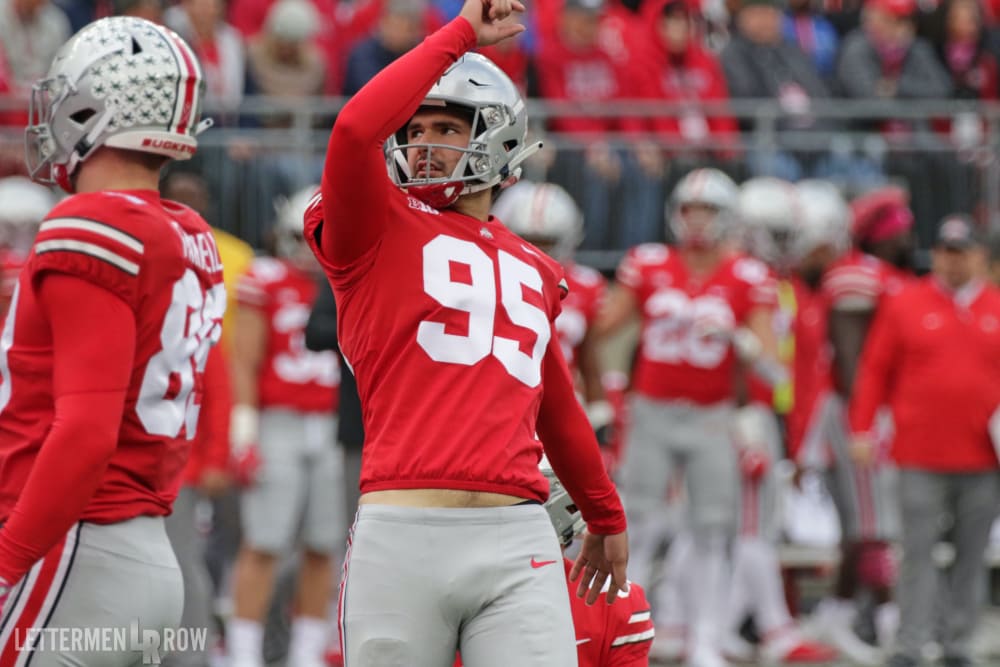 Ohio State kicker Blake Haubeil made a surprise start for the Buckeyes and delivered. (Birm/Lettermen Row)

A surprise starter as the placekicker for the Buckeyes, Haubeil made the most of his chance to go show what he could do and put points on the board. In a more competitive matchup than anticipated, his three field goals and three extra points wound up being critical. And Haubeil also showed off a big leg by drilling a 47-yarder that was easily the longest this season for Ohio State. It looks like it might be time for a permanent change at kicker.