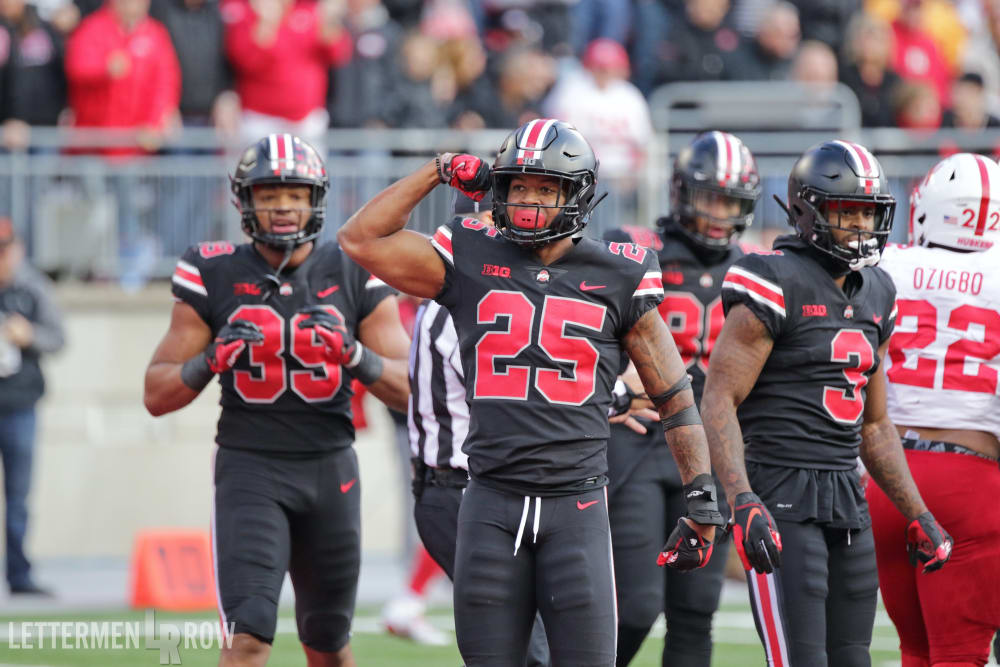 COLUMBUS – There were plenty of reasons Brendon White found himself fighting back tears.

He’s an Ohio State legacy. His father is battling illness and was being recognized on the huge video board at the Horseshoe. And White wasn’t just wearing the uniform — he was playing a meaningful role for the team he has cheered for since he was a kid.

With apologies to those SEC commercials claiming that football in the south “just means more,” that notion could hardly ring any more true in reality than it does with White.

“It’s a dream come true,” White said following Saturday’s 36-31 win over the Cornhuskers. “Hard work pays off. We always go through adversity as athletes and the biggest thing is to not give up on yourself. To have faith in God, and you know we have great teammates here and a great safety room that keeps pushing me.”

Eventually that effort produced his chance to live out a dream. And he made the most of it when the Buckeyes absolutely needed him.

The sophomore defensive back, who led Ohio State is in tackles on Saturday against Nebraska, is a prime example of why it’s so important for Urban Meyer and his coaching staff to remember the home state on the recruiting trail.

With Isaiah Pryor out of the game due to a shoulder injury, the Buckeyes were planning to play White early in nickel packages on top of traditional role on special teams or fourth-quarter mop up duty. When Jordan Fuller was forced out of action because of another suspect targeting penalty, White stepped up.

It’s something Ohio State fans have been waiting for all season. Not specifically White stepping up, but anybody on a talented defense. This isn’t meant to suggest other players don’t care, but there’s no reasonable way to doubt that the chance to put on the uniform means something different to a kid who grew up in the shadows of Ohio Stadium.

Recruited as an athlete coming out of Olentangy Liberty High School in nearby Powell, White came to Ohio State in December of 2016 and practices with the linebackers in his first few workouts. In the spring of 2017, he moved to wide receiver. Three months later, he moved to safety.

With all the confusion and questions, all White did was work. Do you believe a random a prospect from Florida or Georgia would have done that so willingly? I don’t. They likely would’ve transferred out last summer.

Brendon White has been all smiles waiting for his moment at Ohio State. (Birm/Lettermen Row)

The Buckeyes can’t survive solely on recruiting Ohio, because that’s not going to win championships. But, Ohio State has to make recruiting players who love the Buckeyes a priority. Meyer and Ohio State director of player personnel Mark Pantoni have echoed that multiple times.

“We always have to keep reminding ourselves Ohio kids are our first priority,” Pantoni said on Signing Day in February of 2017. “They will be. Sometimes we probably over-evaluate them because those are the kids we get to camp so many times, we know all about, versus a kid out of state. Trust me, we place so much emphasis on the state of Ohio, and we’re going to continue to and do our best to get the best players out of the state of Ohio.”

But in many classes recently, the Buckeyes have just not done that. And in some ways, it’s fair to wonder if they’re losing the heart of your program. Where would Ohio State have been without Pat Elflein, Josh Perry, Darron Lee, Billy Price, Tyvis Powell, Devin Smith, Steve Miller, John Simon, Daryl Baldwin, Denzel Ward and others throughout the last few years?

Recruiting Ohio is a delicate dance, and it’s understandable for the Buckeyes to be a touch more conservative in offering kids within the state’s borders. But since 2015, the roster has undergone a severe drought with those who are born-and-bred Buckeyes, and maybe some of the heart and soul of the program as gone with it.

Only 28 of Ohio State’s 85 scholarship players are from Ohio. That’s the same number of Ohioans that Michigan State and Kentucky have on their rosters.

Perhaps the lack of commitment to Ohio has slowed down local kids from enthusiastically committing to Ohio State? There may not be an area in Ohio more favorable to the Buckeyes than the Mentor area, yet offensive line coach Greg Studrawa couldn’t flip 3-star offensive lineman Nick Samac from Michigan State. He’s having the same challenge with J.D. Duplain, another Northeast Ohio offensive lineman from Strongsville who committed to the Spartans.

Cleveland St. Ignatius linebacker Tommy Eichenberg, who looks and plays like a Luke Kuechley clone, didn’t jump all over an Ohio State offer in September and remains committed to Boston College. It will require a special effort from Billy Davis and Greg Schiano to land him, but that duo failed to make him a priority when his talent was obvious to others. Now it’s no slam dunk to land Eichenberg, who could just as easily flip to Michigan or stick with the Eagles.

Eichenberg still has Ohio State posters on his walls. He’s a kid who grew up dreaming of playing at the Horseshoe.

It’s somewhat ironic that Urban Meyer, a man who grew up dreaming of playing for the Buckeyes himself, might need a reminder of how important it is to sign these kids. That’s what the championship-or-bust pressure brings, I guess.

Ohio State doesn’t need Ohio-born players to win games. The Buckeyes program is one of the best in the country and can recruit players from coast-to-coast, and it has done so since Urban Meyer arrived. But when times get tough, history suggests that there are players it means more for — and will give everything to get the job done. Many, many of those players are from Ohio.

Ohio State has built its programs on the idea that the school will provide a launching pad for its young people, that it’s a place to prepare for life beyond football.

But there’s still football to be played. And there are still those whose hearts beat for Ohio State.