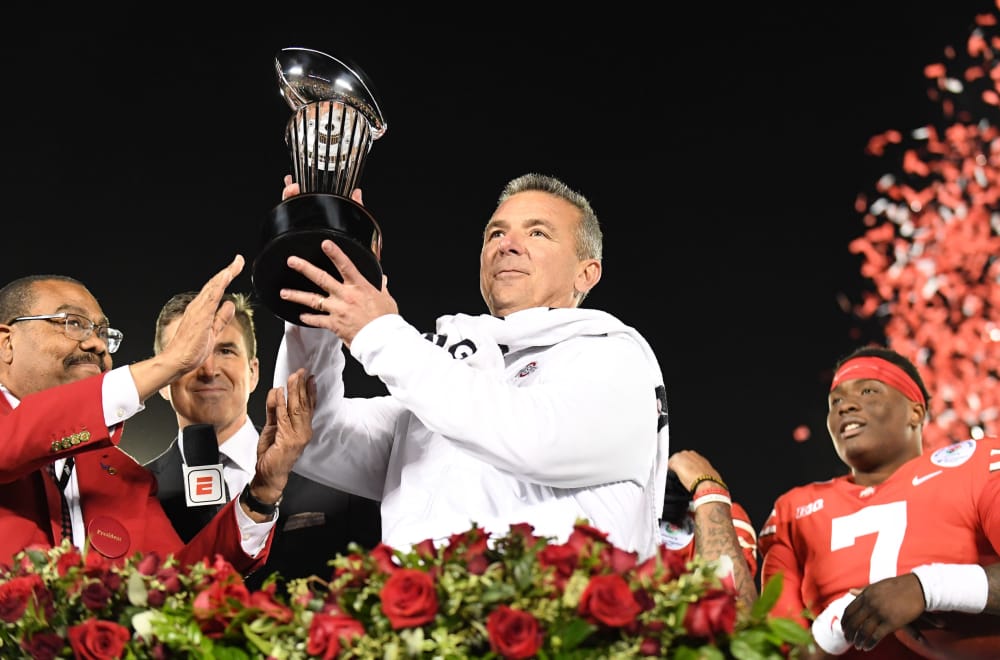 The ‘Granddaddy Of Them All’ and Urban Meyer’s swan song is going down in Ohio State’s annals as a resounding exclamation point on Meyer’s surefire hall of fame career.

Closing out the Buckeyes’ 13-1, Big Ten and Rose Bowl championships season are the “Moments That Mattered” from Meyer’s 83rd win as the OSU coach and 187th of his decorated career.

URBAN GOES OUT IN STYLE

Given every opportunity and asked countless questions to make the stage about himself, Meyer deflected to the setting at the heralded Rose Bowl and his players and staff.

They all responded in a rose-worthy performance — at least until the final 10 minutes of the game.

The Buckeyes’ much-maligned defense kept the Huskies out of the end zone for more than three quarters, and the offense continued to produce in juggernaut fashion against a statistically elite defense, much like the OSU offense did against That Team Up North and Northwestern in its previous two outings.

Haskins three just 13 passes in the second half as Ohio State clearly didn’t execute with the same edge it possessed through the first three quarters and appeared to let up once it built an insurmountable 28-23 lead.

Setting the stage for the contest to become a no-doubter, Dwayne Haskins engineered one final two-minute offense in much less than two minutes and with electric efficiency.

Haskins marched the Buckeyes’ offense 57 yards in just five plays and a mere 46 seconds, capping off his three-touchdown first half with a 1-yard play-action toss to Rashod Berry on first-and-goal from the 1 just seconds before halftime.

The score lifted Ohio State to an 21-3 halftime edge, and the Buckeyes maintained at least an 18-point lead until late into the fourth quarter.

Haskins was a surgical 17-for-24 for 163 yards, three touchdowns and a 169.1 passer rating across the opening half.

TO PARRIS WITH A RECORD

Senior wideout Parris Campbell, a program stalwart during this sustained success under Meyer, moved beyond 1,000 receiving yards on the season and also established a new single-year receptions record for the Buckeyes.

Campbell’s 11-catch outburst, including a touchdown, gave him 90 receptions for the season — breaking David Boston’s old record of 85 snags — and his 17th career touchdown.

Washington had a modicum of momentum, having rallied within 28-17 and some six minutes left in the contest plus it quickly regained possession of the ball.

The Huskies faced third-and-3 inside their 20 when Chase Young pressured Washington quarterback Jake Browning and Brendon White made a brilliant open-field tackle along the sideline.

Yes, the Huskies got back the ball a couple minutes later when the OSU offense got behind the sticks and couldn’t get a single first down, and, yes, they scored a final touchdown. But White even shut down that possession with an interception on the two-point conversion that he nearly returned for a score.

JOHNNIE ON THE SPOT

Though it never felt like Ohio State truly was threatened, the Buckeyes needed Johnnie Dixon’s recovery of Washington’s onside-kick inside the final minute to secure the program’s eighth Rose Bowl crown.

Dixon, a captain who had two catches for 27 yards including a touchdown, smothered the bounding kick and the Buckeyes then began their celebration.