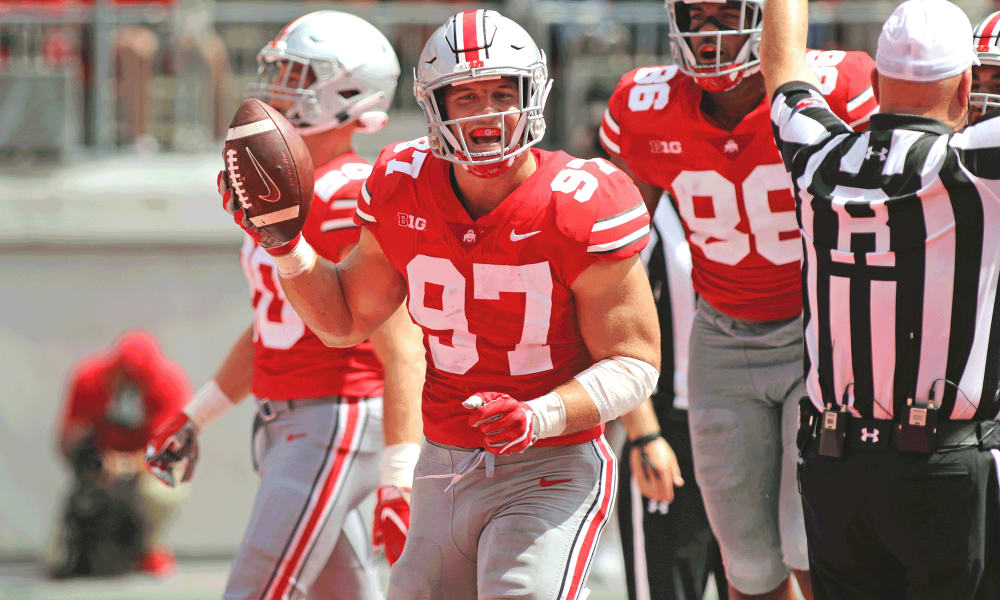 COLUMBUS – If he’s able to stay healthy, Nick Bosa is going to win some kind of trophy this season.

Whether it’s the Nagurski or the Hendricks or the Lott or the Bednarik or Lombardi, he’s going to win one, and maybe more, because he’s the single most dominant defensive player in college football.

That’s why Bosa should be considered as not just a true candidate for the Heisman Trophy, but a front-runner. I know, it’s ludicrous to even mention that award this early in the season, but for Bosa to do what no exclusively defensive player has ever done requires some outside of the box thinking. We’ve got to talk about it now and do so knowing this isn’t a guy that will win the September Heisman and then fade away.

Did you watch what he did against Oregon State on Saturday? Bosa only played a half — there was no reason for him to play more — yet, as a defensive end rotating series and snaps, he controlled the game. Four tackles, two sacks, two fumbles recovered and a touchdown, the first of his career. That’s just another day at the office for the 6-foot-4, 265-pound junior, who created havoc on nearly every rep despite being consistently double-teamed.

As a sophomore, Bosa led the Buckeyes in sacks with 8.5, notching that number on only 526 snaps as part of a four-man rotation that included three 2017 NFL Draft selections.

It’s time to give the Heisman Trophy to college football’s best player and that is Nick Bosa, and that’s not meant to be disrespectful to any of the great players around the country, but simply to point out that what Bosa does can’t be replicated by anyone else. There’s no “system defensive end” in football. Bosa is a legend among his peers, and for good reason: he’s unbelievably productive and impacts every play when he’s on the field and impacting his teammates even if he’s not.

“A defensive lineman has never won the Heisman before,” Chase Young, Bosa’s bookend for the Buckeyes, said following Saturday’s performance. “But, If anybody could win the Heisman, I think Nick Bosa could do it.

“Technique-wise, I mimic him in practice, his moves and things like that. Just me saying that you know he’s the real deal.”

Bosa, according to Bovada, was getting 66-to-1 odds to win college football’s most prestigious the award in the offseason. The mere suggestion that he should win it will draw the ire of traditionalists who believe only a quarterback or running back deserves the honor. History isn’t on Bosa’s side obviously, even former NFL top overall picks like Jadaveon Clowney (sixth in 2012 voting) or Ndamukong Suh (fourth in 2009), couldn’t generate the buzz needed to make history. The highest finish for a pure defensive lineman in the Heisman voting? Pitt’s Hugh Green was the runner-up in 1980 and his stats that season were video game like: 123 tackles, 17 sacks, seven forced fumbles and six fumble recoveries.

If the award is meant to be given to the game’s best player, then Bosa is worthy of it, regardless of how many snaps he plays compared to other candidates.